Last night we sailed by the volcano Stromboli which was as expected – sort of active- and with that cryptic description I mean it was spewing hot lava at an almost constant pace but in small spurts so there was no big drama and or explosions. Still very nice to look at, as it was very well visible in the dark night. Stromboli has been constantly active for a large number of years but since the 1950’s it has not had a major eruption or explosion. The cone is also not in the center but located on the north east side and that makes it possible that there are approx. 300 people living on the south & west slope of the volcano. 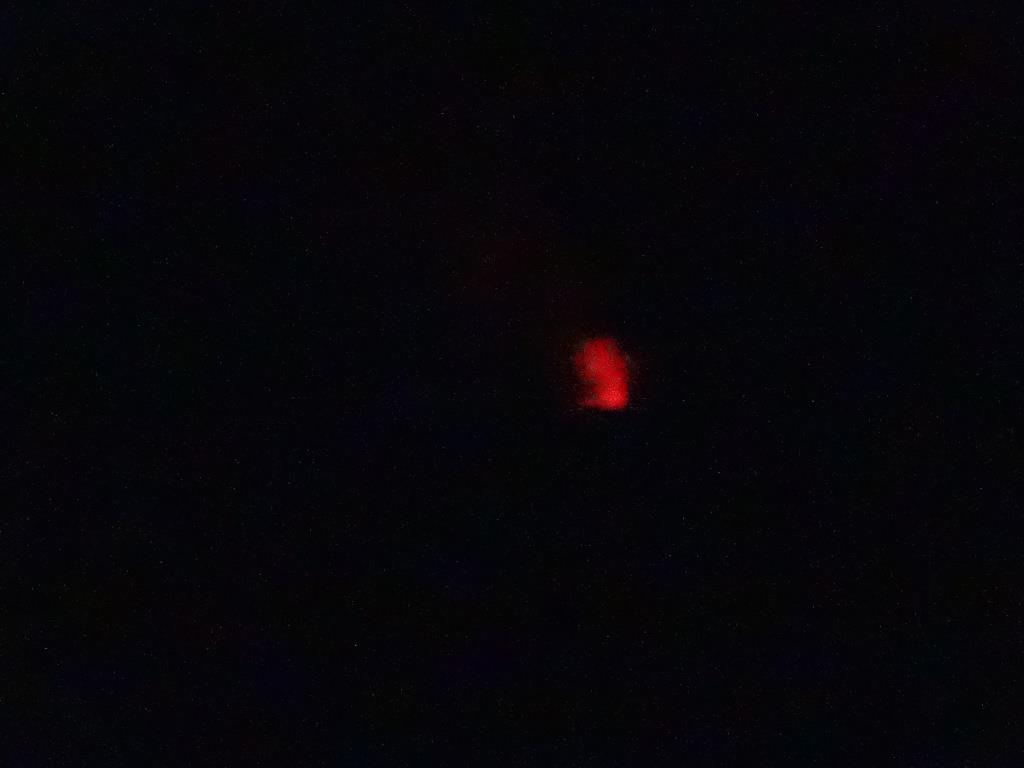 I do not carry a turbo camera with 40 mega pixel etc. So this was the best I could do. But the oh’s and the ah’s from the balconies did indicate that is was appreciated by the guests and the view a lot better than my little camera can picture.

They had a major eruption in 1953 and then about 1700 inhabitants left but nowadays the island is slowly being repopulated. In the summer time it has a lot of tourists who come for a visit as it is quite safe to climb the volcano as long as you know where to go. I was wondering why cruise ships do not stop off here, but due to the exposed landing site for the tenders it would be nearly impossible to plan it into a cruise schedule as 9 out of 10 times the swell might be too high to bring boats alongside. So the tourists come with a ferry boat and that is much easier as those sailings are simply weather dependent anyway. 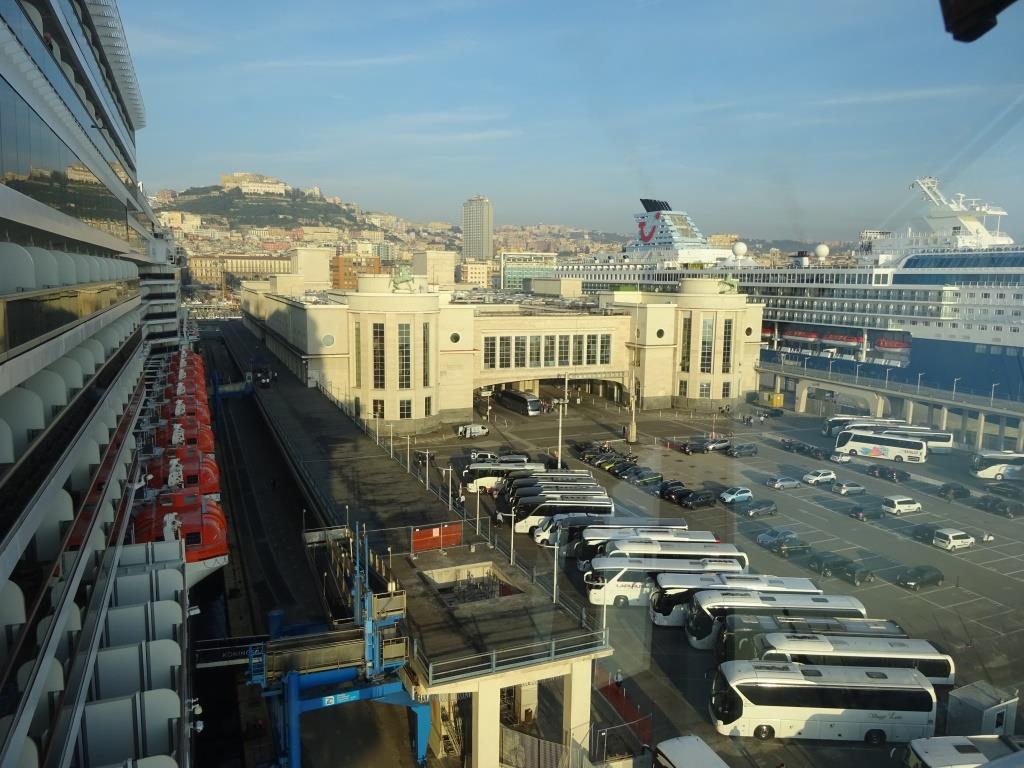 The passenger terminal as seen from the bridge. Opened in 1935 and  since then very little has changed (For more details: https://thebeautyoftransport.com/2018/01/10/neapolitan-delight-naples-marine-terminal/)

This morning by 06.30 we were safely parked at the west side of the Cruise Terminal of Naples which is really the Passenger Liner Terminal from the old days. (The main difference is that the old waiting rooms have been converted into shops and some conference and/or exhibition areas) The building is a left over from the Mussolini period. He might have done a lot of bad things but he did restructure the Italian transport systems. The trains ran on time from that moment on (and they still do to a large extent) and all the squabbling ocean liner companies were brought together into the Italia Line, or when staying out of it, aligned in such a way that there was a good structure to the whole sea going transport system. It also resulted in the only time that that an Italian company won the Blue Riband for the fastest Trans-Atlantic crossing to New York. As the terminal was built in the heyday of Italian nationalism (called Fascism here) the terminal is a concrete nihilistic structure with a little bit of Art Deco elements in it but with rampant horses on the sea side face of the building to give it a macho touch. It has been adapted with fly overs and walk ways in the later years to make it easier for the cruise ships to get their gangways out on an even level.

The San Guisto. Docked in style Mediterranee.  The bow is kept in place by the anchor and the stern ramps provides access.

Docked right below the rampant horses was an Italian amphibious transport dock ship of the Italian Navy called the St.Guisto (pennant number L9894). Dock ship means that it has ramps and a dry marina in the stern so it can have on board a number of landing and patrol craft. The sort of thing that you need if you start an invasion somewhere. It has always puzzled me that a war ship would carry the name of a saint, as saints are supposed “saintly” and not involved in warfare. But it is all traditional and the St.Guisto name is not used for the first time in the Italian navy but goes long ways back. 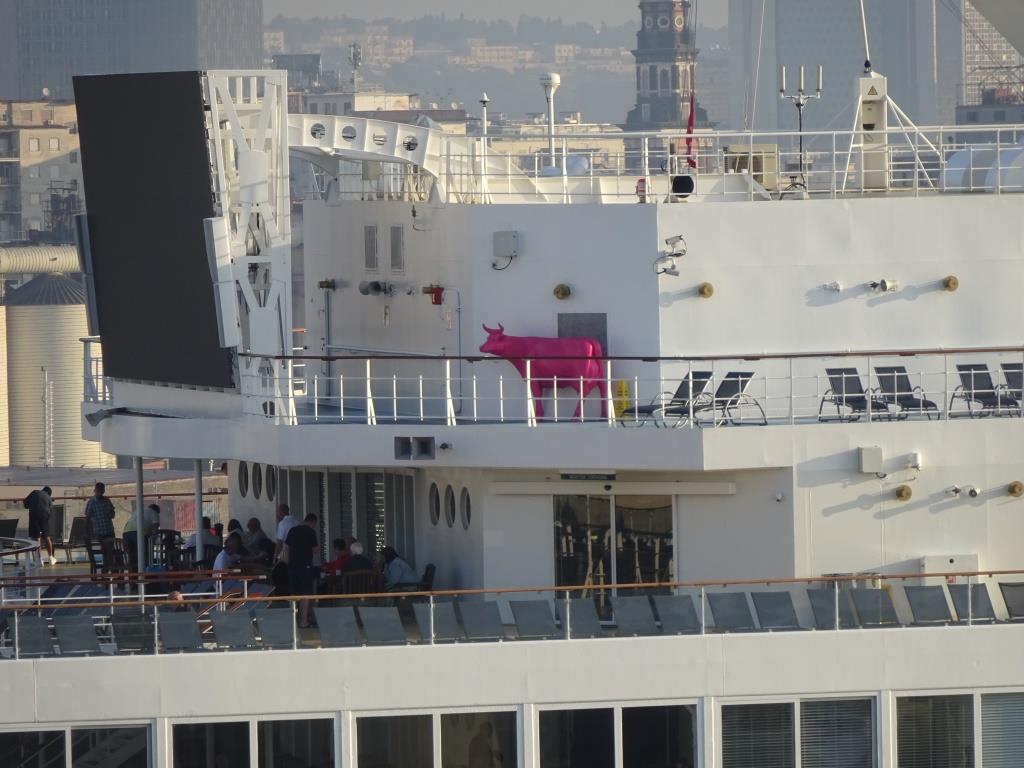 While looking at the Marella Explorer 2, I saw this pink/purple cow on the top deck. I have no idea what it was doing there but…………. the Koningsdam can do better. See below.

We were not the only cruise ship in port as next to us was the Marella Explorer II, which had sailed from Malta as well, as it was leaving dry dock the day the Koningsdam left. So they were in port today to start there cruises again after having had their refit. Marella is a sub company of TUI which is a (German) sub company of RCI. Tui in this way operates modern ships by means of the “Mein Schiff” series and then an older ships operation which is called Marella. Marella also employ our old Noordam (III) and Westerdam (II). If I was to explain how this whole operation works with all these sub companies then I could fill about 5 blogs but that information is readily available on Wikipedia. 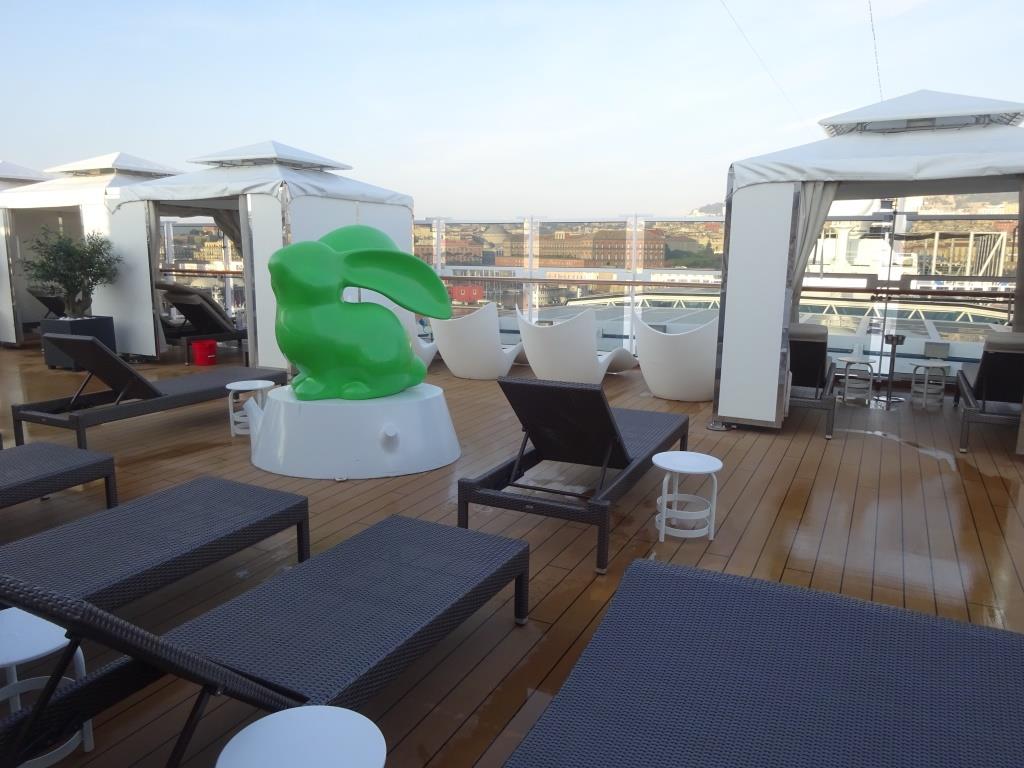 Because we have a bunny. This statue is located on Deck 14 where the Cabanas are located and forms the focus point of the whole area.

The weather forecast for today, as on arrival, was a chance of showers although it never materialized. But as a result we could not see  Vesuvius from the ship as its cone was covered in clouds. Maybe not a bad thing because if it would explode, then there would be instant rain available to douse the flames again. The nice result was however that a large number of guests took their cabin umbrella with them and orange was seen all over the port. The other ships still have blue umbrellas but with the arrival of the Pinnacle Class the umbrellas changed to orange, as now everything that is part of the in-house-design has a touch of orange to it. Starting with the uniforms and ending with the shoe laces of my safety shoes. (orange/black braid)

My day was spent on trainings. These are regular trainings that are normally conducted by the 2nd officer training on board but I have started to realize that in some instances it helps that the crew gets a little push from somebody with authority to realize that they are really are allowed what they are trained for. Especially if it is something that is outside their comfort zone of their job level. It is a big step for a new assistant cook, fresh out of the Philippines, to push the big red button which shuts down the whole galley ventilation, but if it has to be done, it has to be done. And in this way I can provide the backup which can let them say: I did it for safety and Captain Albert told me I could do so.

Tomorrow we are in Civvitavecchia, the gateway to Rome; and for a lot of guests the gateway to the airport of Leonardo da Vinci in Fiumicino/Rome as tomorrow is change over day. Then tomorrow afternoon we start our Trans-Atlantic cruise which will take us to Fort Lauderdale where we are scheduled to arrive on November 13th.

Weather for tomorrow: Overcast with an increasing chance of rain after 10 am.  21oC / 71oF.