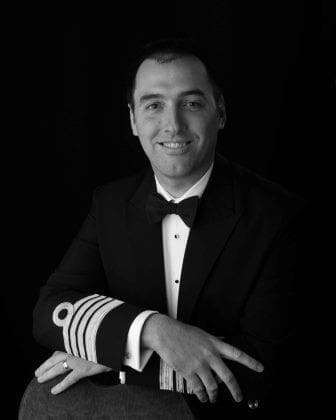 Captain Ryan Whitaker joined Holland America in early 2000 as a second officer. He started out at sea at a very early age, being from England where apprenticeship can start when you are 16 years old. He choose Shell Tankers so already had a very early connection with “The Dutch” as Shell is a Dutch company. When he was 19 he obtained his 3rd mate’s license  and sailed as a 3rd officer on an LNG (Liquid Natural Gas) tanker.

Promotion to Chief Officer followed in 2007, also on the Zaandam and then assignments followed onboard the Statendam, Prinsendam, Zuiderdam and Oosterdam

He was staff captain on the final sailing of the Statendam from Vancouver to Singapore and then involved in the Dry Dock and reflagging of the ship. He remained with was now the Pacific Eden for 14 months as part of the transition team and then came back and was re-assigned to the Zaandam in April 2017.

After being assigned as Captain to the Rotterdam he was transferred in April to take command of the ms Maasdam.

He met his wife while cruising in French Polynesia; the made contact as she also worked for the company in the head office in Seattle. Eventually they decided to settle down in England in 2006 in a house located in the English Lake District National Park in England in 2006, where they enjoy the country with their two children.