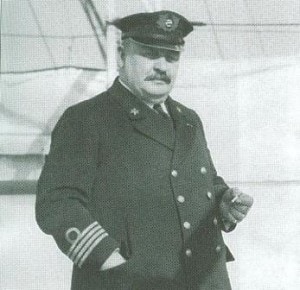 Captain Pieter van den Heuvel, normally called Piet, was born in 1869 and lived at sea for the first six years of his life. His father was the captain of the schooner Anna Sanders and sailed with his family on board. When after six years his father went ashore and settled down in Dordrecht, Piet ended up there as well of course.

After deciding that he wanted to go to sea he attended the “Kweekschool voor de Zeevaart” in Amsterdam. From 1885 to 1888 he worked on sailing ships with voyages to the Dutch East Indies and America. Then in 1888 he joined the Holland America Line. He was signed on as fourth officer on the Rotterdam (III) but was promoted in four years time to Chief officer.  Until 1901 he sailed as chief on several ships of the company until he got promoted to Captain on the Maasdam (II) in 1901.

He sailed continuously through the first world war (quite a few of the ships were laid up in this period, so this was more unusual than it seems –ED). During the war he sailed on the Rijndam and later on the Nieuw Amsterdam (I). At a certain moment he was the last captain still sailing as the Nieuw Amsterdam was the only ship kept in regular service for the company, as the country needed the grain that the ship delivered each voyage.

According to the Commodore the new Statendam was a great ship. The company could use two more of them to deal with a the interest. Those who did not select the fast ships for a quick crossing, invariably preferred the Statendam for its cosiness.

After 42 years at sea, there were several anecdotes to tell: He was extremely proud to advise that in all his years he had not lost a single passenger while sailing. Something, that was, due to the small ships of the early years, not that usual.  The old Schiedam and Zaandam took 14 days to get to the other side but now we do it in a week. With these ships barely measuring 3000 tons, the seawater could easily wash over the decks with a rolling ship. An unaware passenger could then easily slip and slide over the side.

The worst experience of the captain was running on a mine with the Rijndam. (18 January 1916) However London could be reached and the ship did not sink. There the cargo was re-stowed so the ship was more in balance again and then the voyage was continued to Rotterdam for repairs.

Bad weather was not unusual either. During one storm the Prins Willem sank in the English channel (23 January 1910 with 54 people on board) and I was very close behind it, but survived.

Another story was about a lady.  The captain had just arrived with the Rijndam in Rotterdam and was taking the little ferry boat from the HAL pier to the north shore of the river Maas.  (This ferry is called Heen  en Weer in Dutch, which translates in To and From,….. what basically the function of a ferry is) While on the ferry, he saw a lady that he had also seen on the Rijndam. So he asked her, if she indeed had come over with the Rijndam.  “Yes indeed” she said. Then she said: “I thought I saw you on board as well, did you travel First Class”?  “No” said the Captain,  “I am part of the crew”. “Oh” said the lady, “now I recognize you, you are the Ships Barber “ ………………..

Another little story, this was happened in New York. The captain went ashore to send a telegram and was in his civvies but happened to be wearing his uniform cap, when he saw a man walking there with a very large suitcase.

This gentleman inquired in a very brusque voice, “is that the Rijndam”. “Yes”, said the captain, “would you like me to carry your suitcase”.  “ Yes, but only if you are careful”. So he carried the suitcase onto the ship for him and received a quarter as payment.

While just underway, he saw this brusque passenger looking at me totally perplexed and understood that he wanted to apologize. But he kept avoiding the man for the next three days. Then finally he managed to corner the captain. He said, I think that I have seen you before. The captain said, “Yes, I think you did and I also think that I know why you want to see me”.  But you will not get your quarter back”.  The man’s face was a picture to behold…………….

During the last voyage, there was quite a commotion on the ship. The stock exchange in New York had suffered a second big dip. Many of the passengers inundated the radio officers with telegrams. With this there was a bit of a problem, as all the shore stations were continuously busy with telegrams from other ships who said similar challenges. Thus it was not easy for the radio officers to get through. A few passengers advised, that millions were riding on their telegrams. However the Radio officers could not do very much; if they could not make the connection with the shore station and neither could the captain of course.

The last voyage for the Commodore was a mixed bag. The first three days he had nice weather and then it was just bad. He could have arrived early in Rotterdam but decided to slow down a little bit, so he could swing on the Ebb tide near the terminal. Then the ship could dock nose out to open sea. Ready for his successor to sail straight out, without having to make the swing first.

That new captain was going to be Commodore Krol, who was scheduled to leave with the Statendam on 7 December 1929 for the next voyage. As the retiring Commodore said:  “Le Roi et mort, vivre Le Roi.”

In total he made 298 voyages to New York and a five cruises. Also he sailed for seven years as commodore for the company, first on the Nieuw Amsterdam and for the last 7 voyages on the Statendam (III)

The captain retired in Holland to the town of Wassenaar. However he was planning to travel on a regular basis to the States. Although his home was in Holland, most of his friends lived in the States, due to the fact that while docked in New York, there was the time to socialize and go out.

(From Nieuwe Rottedamsche Courant 28 November 1929 and other sources)