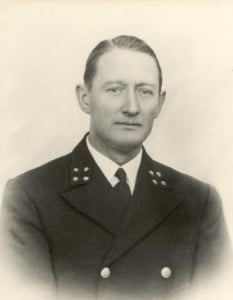 Before we start this biography we have to settle the problem of the spelling of his name.  In this case the muddle between the Dutch spelling and the English/American spelling. Holland American had that challenge with their ships as well. Hence the cargo ships were “dijks” until 1923 and then became “dyks”.  Something similar must have been going on with our captain because when he was born his name was spelled as Ruijgrok and when he died it was spelled as Ruygrok.

He was born on 18 August 1894 as Bernard Ludovicus Josephus Ruijgrok. in the  town of Arnhem in the East of the Netherlands. Of the Roman Catholic faith but not with the extra name of “Maria” as was often the case in Dutch R.C circles. His father Jacobus Johannes Ruigrok was a music teacher and his mothers name was Catahrina Johanna Francisca Brantjes. There were 7 children and he was nbr. 3 He was born in the Driekoningen straat 16 in Arnhem. The house does not exist anymore as it has been replaced by a school. Un verified information indicates that the house was damaged during operation Market Garden in 1944 . (a,b) 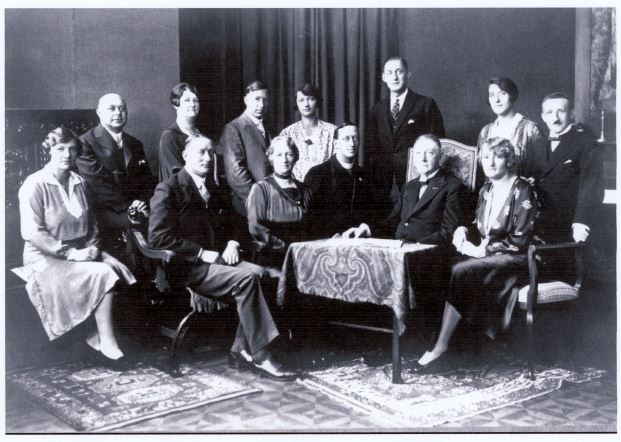 The family Ruygrok in 1930. Captain Ruygrok is second from left sitting at the table. (a)

He joined the oldest Maritime Academy in the world. ”  De Kweekschool voor de Zeevaart” in Amsterdam on 01 September 1910. He is noted twice in the school records for winning a prize in Mathematics and ends school as nbr 4. of 17 cadets. 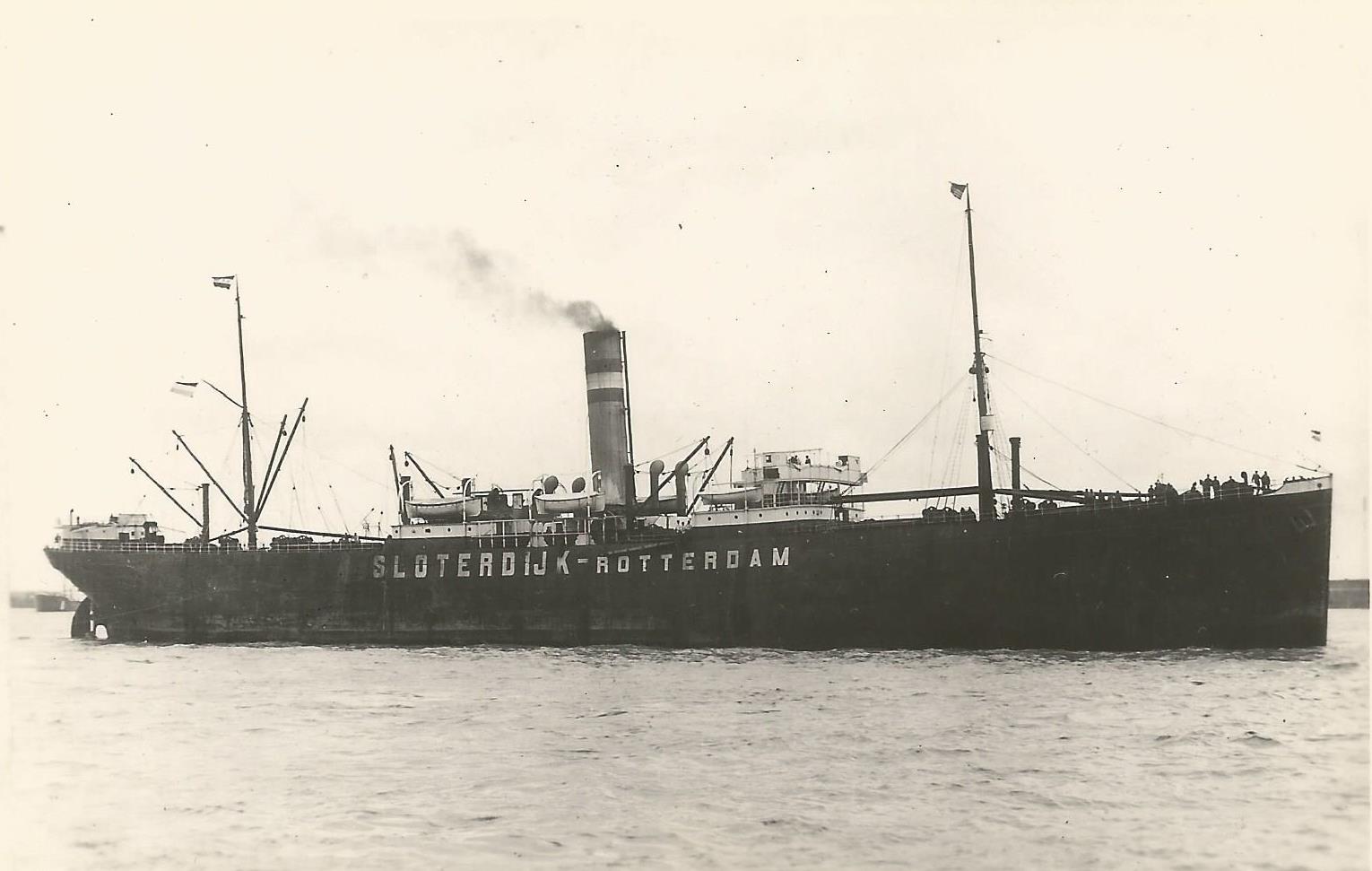 The ss Sloterdijk (I) of 1901  This was one of the first cargo ships of the Holland America Line after they decided to split their ships into Passenger ships and cargos ships around 1900.  This photo was taken during World War I, note he neutral letting on the side so not so long after Cadet Ruygrok sailed on it.

He is then placed as cadet on board the ss Sloterdijk (I) on 19 August 1912 and returns to school on 31 August 1913 with very good sailing reports. Then he passes his 3rd mate exam on 31 October 1913  and is dismissed from the Maritime Academy on 21 November when he  is taken back by Holland America. On 08 December he joins the ss Rotterdam (IV) as a  4th. officer but is by April 1914 back on the ss Sloterdijk.  Five months later his country needs him as it mobilises due to the threat of the First World War and he is assigned to the Royal Navy. (ED:  there are no entries in the company records which indicate  that he kept his Royal Navy connection going  except for a short spell in July 1916; but he might have as the company was really encouraging all officers to do so) By January 1915 it was quite clear that the Netherlands would be able to maintain its neutral status and he returns to Holland America and is assigned as 3rd. officer to the ss Maasdijk. 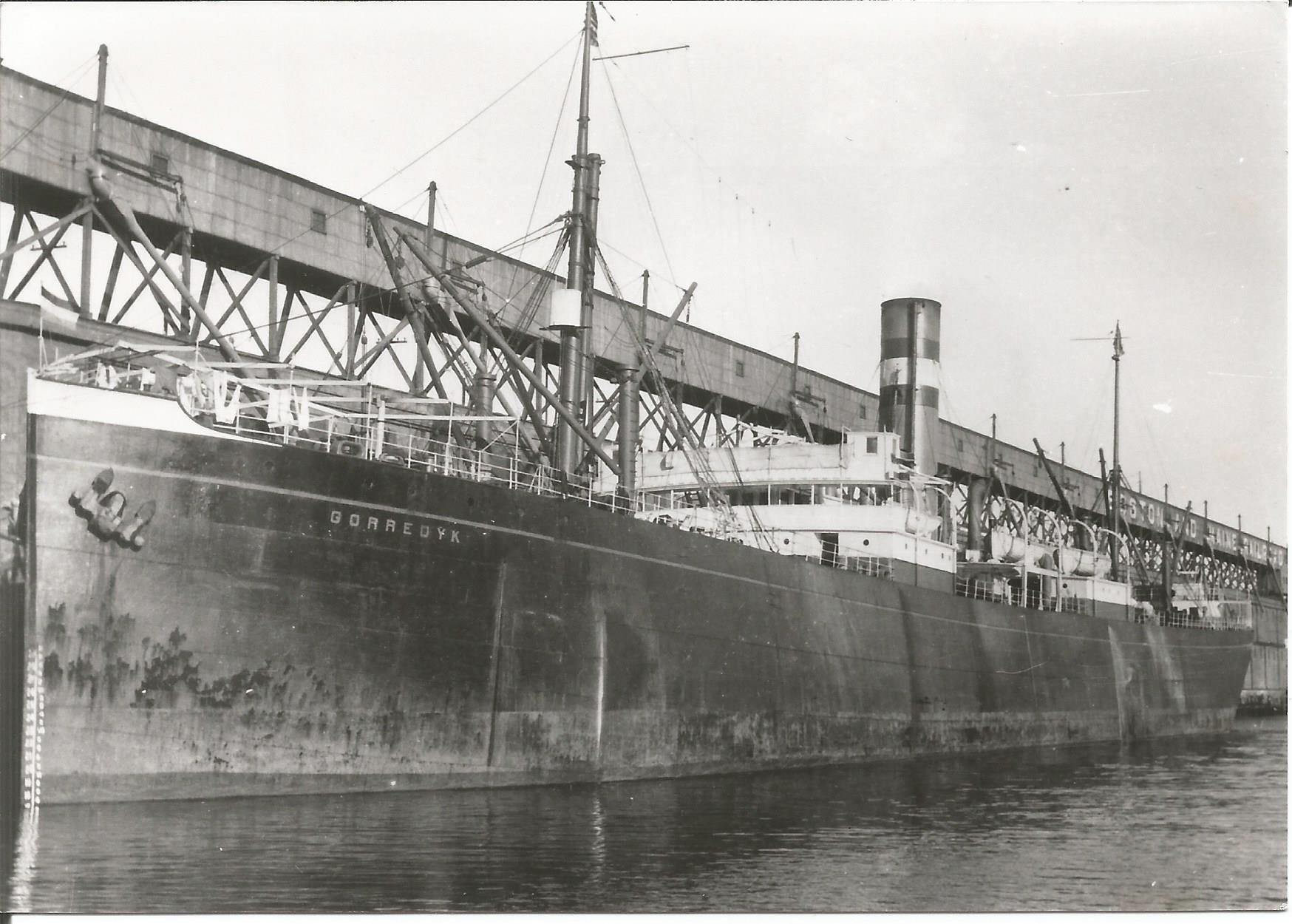 The ss Gorredijk (II) which was brought under American flag in 1918 and was used as the USS Gorredijk for general cargo work. to support the war effort in Flanders.

He was on the ss Gorredijk by January 1918 as 2nd Officer and still on board when in March the US Government seizes all foreign ships in US ports. As the Netherlands is neutral, the crews can not stay on board and are all (together) returned home with the ss Nieuw Amsterdam.  But by June he is back on the fleet, being assigned to the ss Noordam (I)

While ashore in February 1919 he manages to find time to marry on 14 February  Helena Maria van der Meulen  at Arnhem. (Daughter of Cornelis van der Meulen and Anna Catharina Sijbecarspel who is listed as a Boarding house proprietor) Eventually there were four children, Bernardus (Born 17 September 1921),  Cornelia (Born 01 September 1923), Annie (Born 12 March 1925)  and Jacobus (Born 13 May 1927) .He went back to sea sailing the ss Noordam. 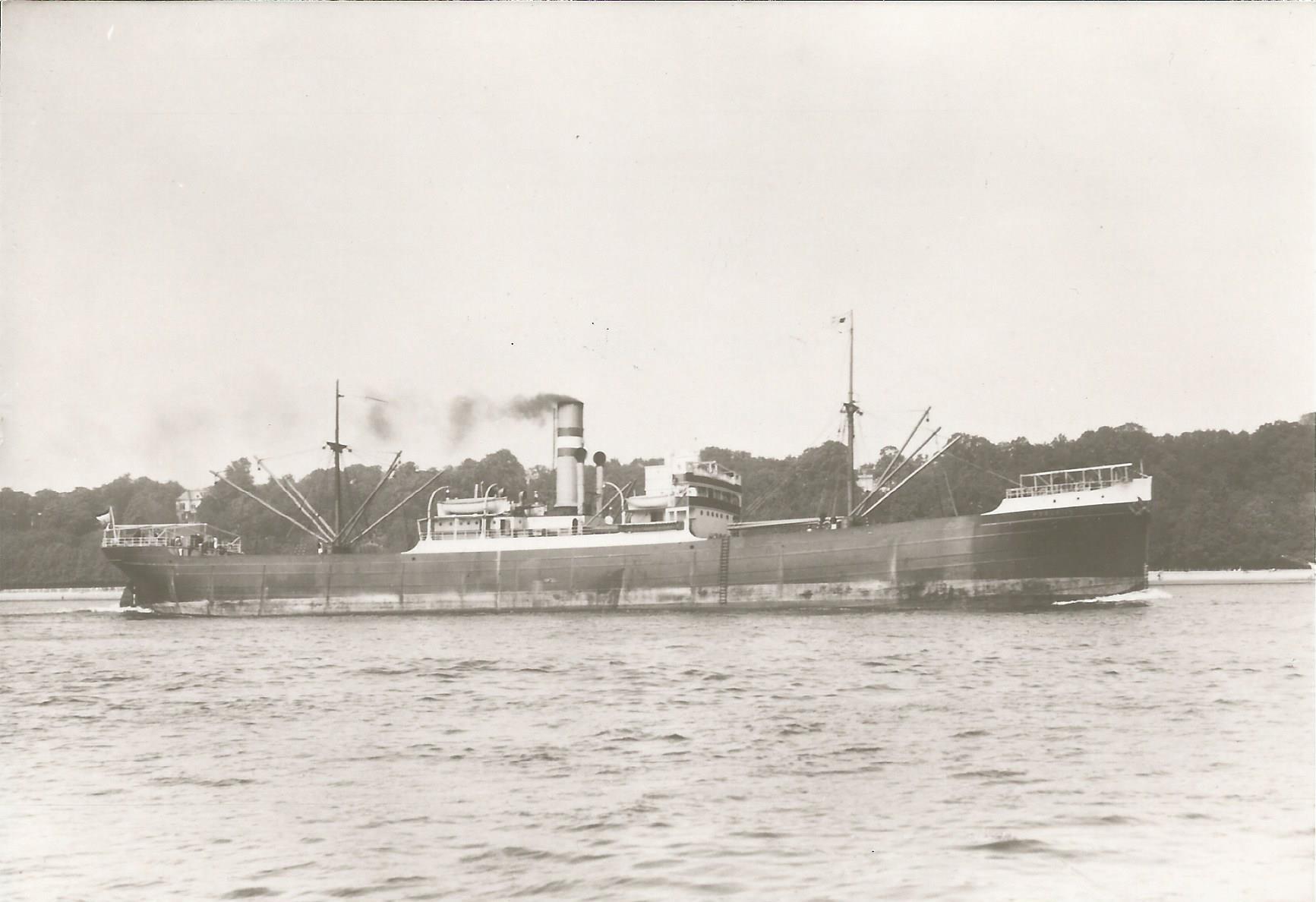 The ss Poeldijk (I) which became the captains on/off command for relieve periods.

Un until 1922 when he is promoted to Chief Officer, he mainly sails on the passenger ships. Then on 24 August  1926 he is promoted temporary  to  Captain to do a fill in on the ss Poeldijk (I) This is repeated in 1927 and 1928 when he is in command for the coastal voyage from Rotterdam to Germany and back to Rotterdam, while the regular captain took a few days off.  The the depression arrives and he remains Chief Officer until 1939 as there is no fleet expansion and many ships go into a=lay-up. By now he almost permanently sails on the passenge rships including the flagship the ss Statendam (III). 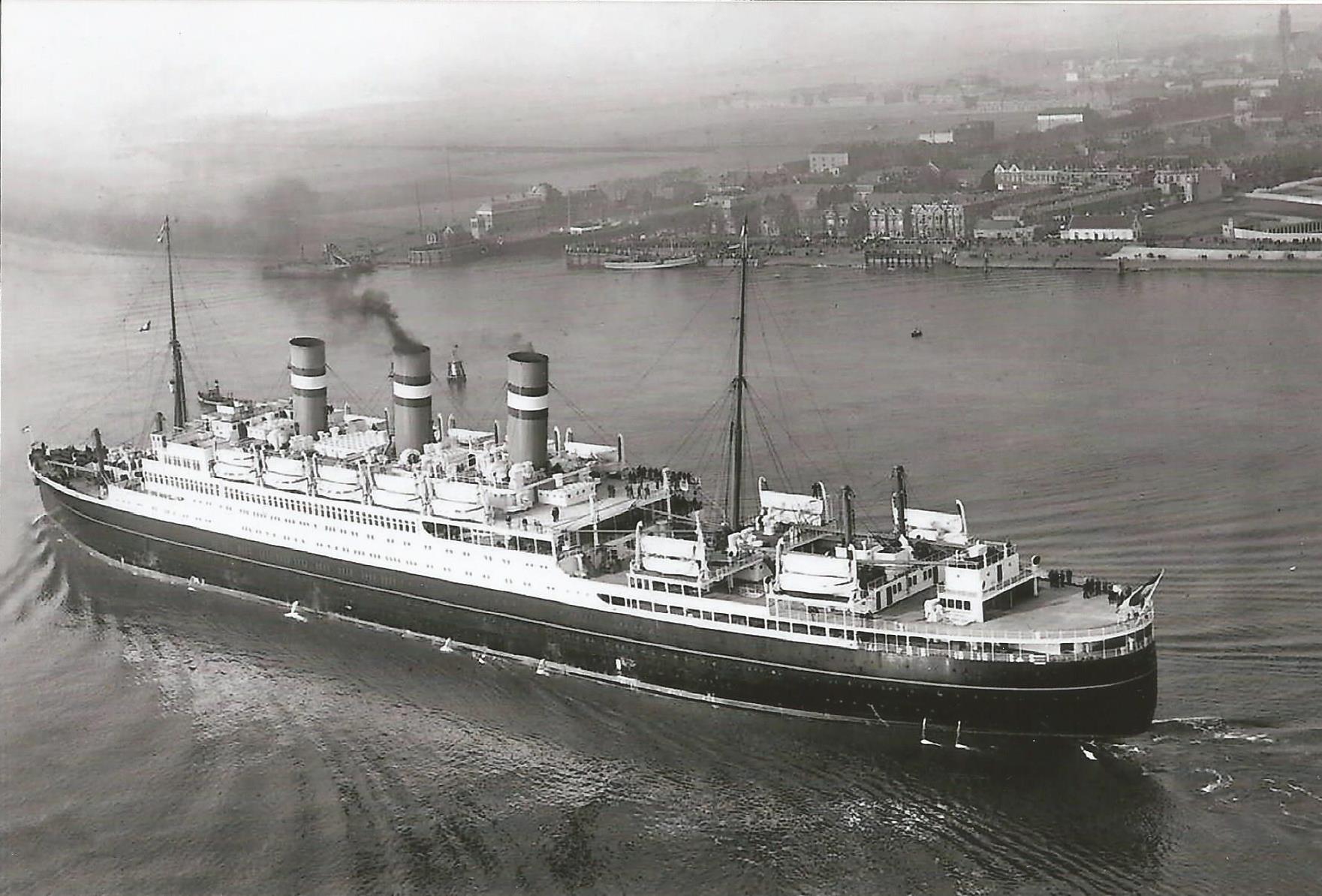 The ss Statendam (II) She entered service in 1929 and until the arrival of the ss Nieuw Amsterdam she was the flagship of the fleet.

When reaching the flagship, it is normally the indication that the next assignment will be captain of a cargo ship, due to the Holland America system of being assigned to every more senior ships in the fleet and upon promotion starting again on the smallest / oldest ship. 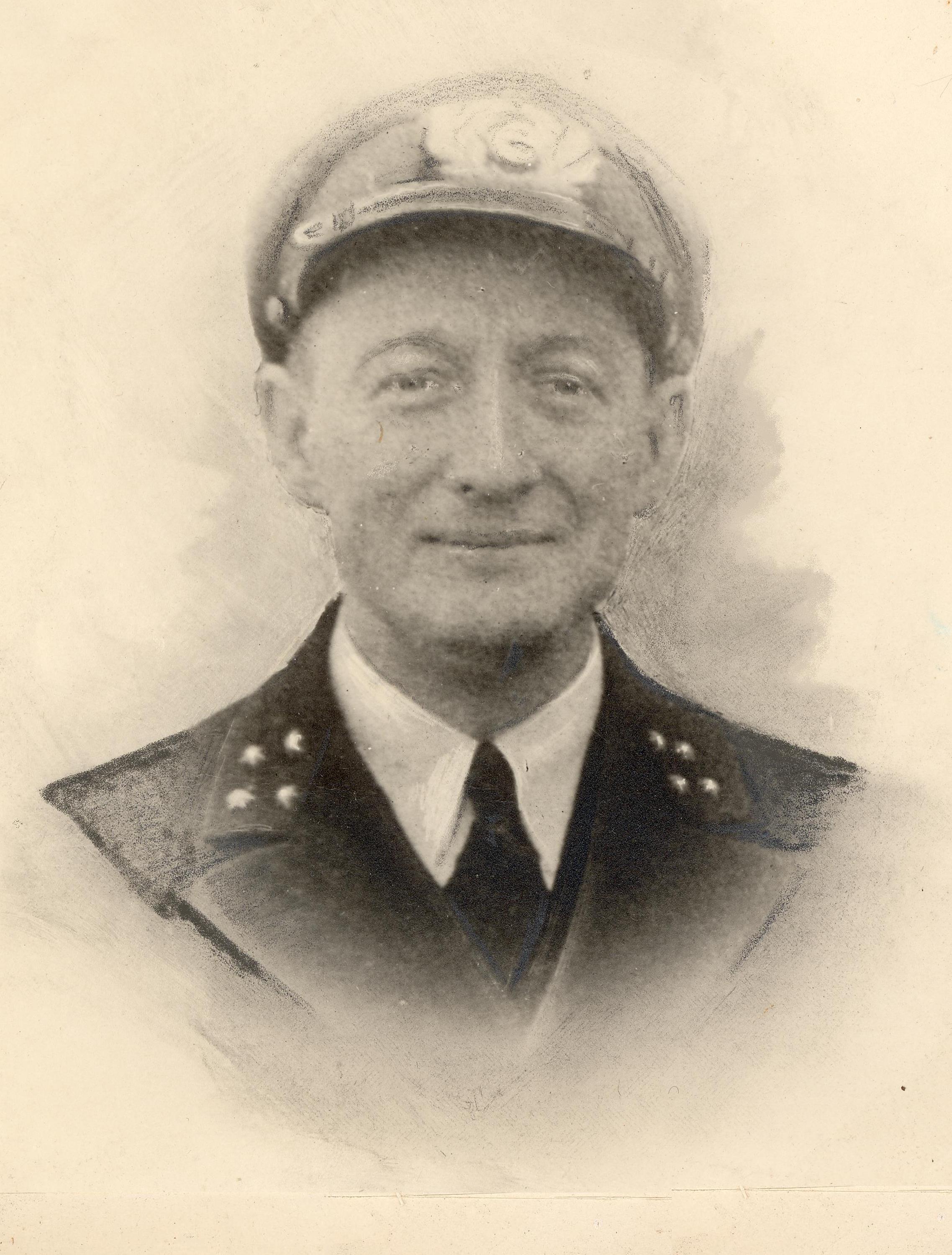 Captain Bernard Ruygrok. This photo must have been taken while commanding a ship as the fold edge of  the captains position can be seen on the cap.

This turns indeed out to be the case and 20 May 1942 he is promoted to Captain on the ss Breedyk at Capetown, the previous master, Captain Libau. The ss Breedyk was in allied service and as a cargo ship sailed all over the world. For his work as a captain he was award the Cross of Merit by the Dutch Government on 25 December 1941.  It is assumed (subject to full verification) that he received this decoration for the episode of the ss Volendam being torpedoed with 300+ children on board and then bringing the ship safely to port where it could be repaired.

Then on 20 May he takes command of the ss Breedyk in Capetown and sails eastbound to the Far East to load cargo in the British colonies. It turns around at Calcutta and after loading a general cargo it heads  for England. There are stops at Cochin and then at Capetown for fuel. The latter was a major junction in the world wide “war transport” routes and often crew changes took place here. After re-fueling the ship continues up the coast of North Africa with Liverpool as final destination. On 14 September at 23.05 hrs. the ship was struck by a torpedo of the UB 68 near the stern  and the captain orders all the lifeboats to be prepared but not yet to be lowered as he wanted a full report first.  (Position: 05.05° S / 08.54° W approx. 150 miles south of Cape Palmas)  The engineers report that the water is rising quickly with hatch 6 near the stern already filled. 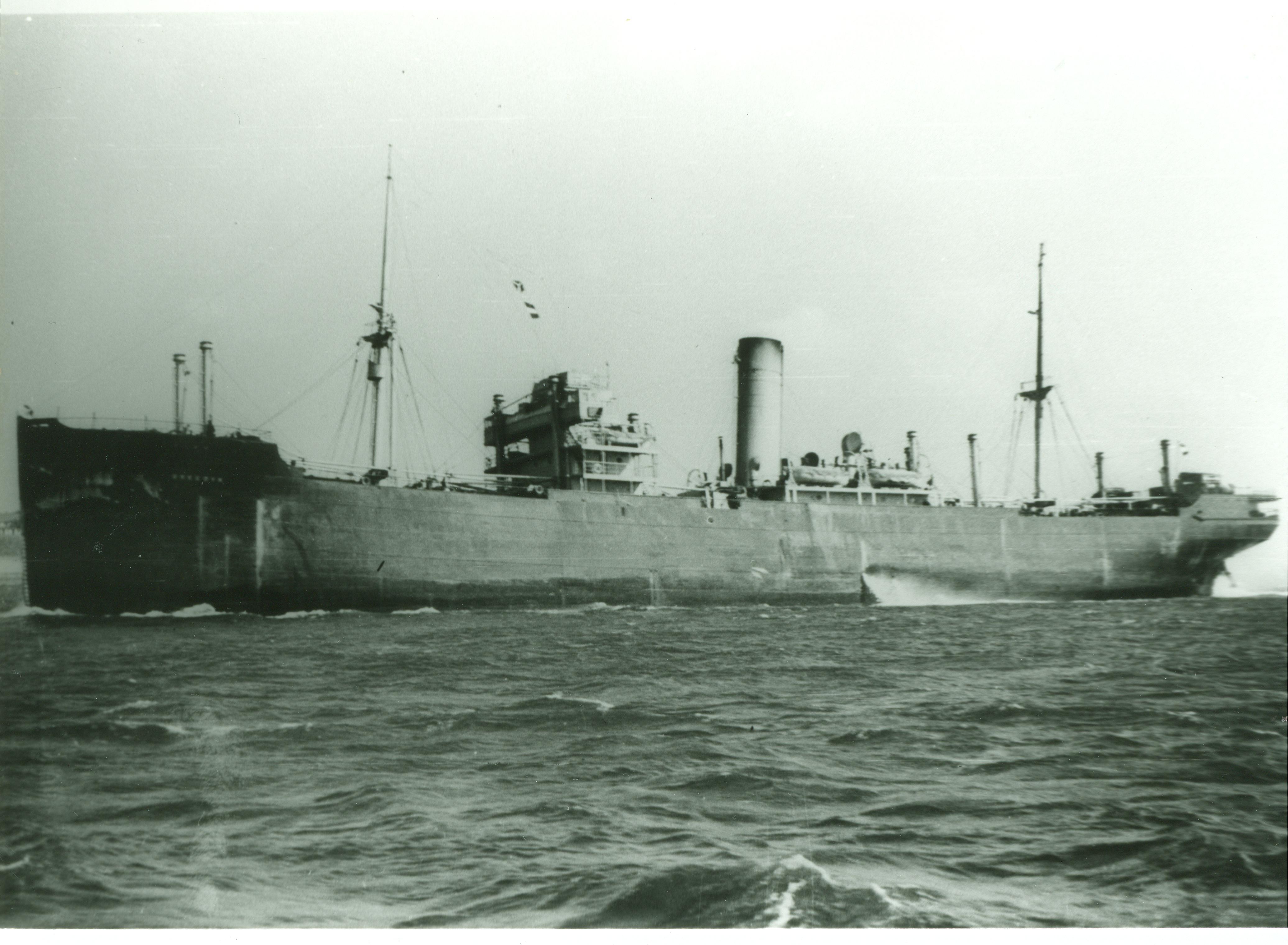 The ss Breedyk. Seen here in war time grey. She had entered service in 1922 as one of the 10 B class cargo ships. Handed over the British  in 1940 she was used mainly on the North Atlantic convoy service between New York – Halifax and Liverpool.  In the  spring of 1942 she was diverted for the first time to  the South Atlantic,

The boats were then made ready but Capt. Ruygrok asked them to wait a moment while he went to his cabin. (ED: We can only speculate why but my guess would be to pick up the ships log and other official papers  as those would be extremely important during the subsequent hearing at the Board of Inquiry) But the ship was sinking so fast that the boats had to be lowered and at 23.18 hrs. the ss Breedyk capsized and sank. Captain Ruygrok was never seen again. Apart from him one servant died as well.  Four boats were safely lowered and three of them landed on September 16 near Freetown and 37 crew were safe. The fourth boat has  first picked up 2 more crew who were in the water and that brought their total on board to 16.  Three of them were transferred to another boat and that left 13. This boat then got separated from the rest.  They finally landed at the Ivory coast on 27 September and were arrested there as P.O.W’s by the French Vichy Government and interned in very bad accommodation. It was not until December 12 that the camp was liberated as a result of the Allied invasion in Africa. Apart from the ss Breedijk  also the Dutch ss Gaasterkerk was torpedoed by the same German submarine in the same area. Normally there was not so  much submarine activity so far south but the German  high command had initiated “Operation Eisbaer” to isolate Capetown as an allied traffic hub. 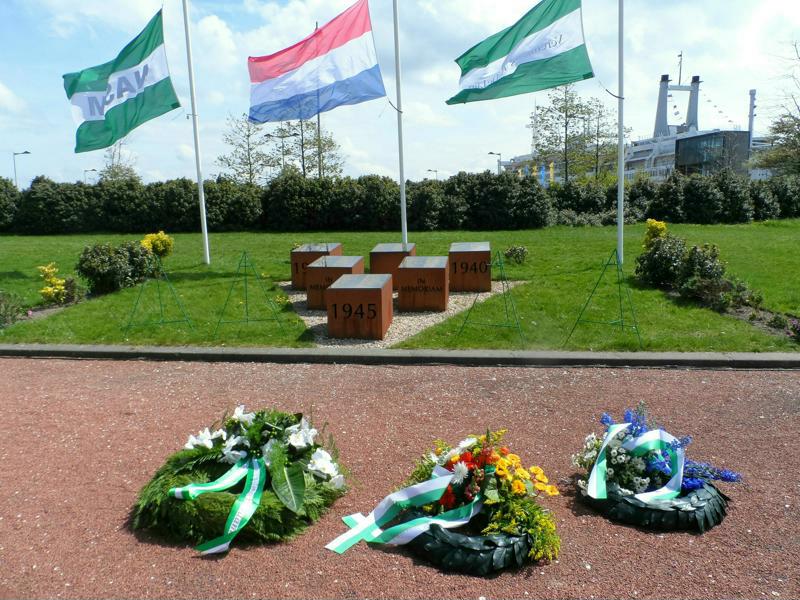 The HAL War memorial at Rotterdam, opposite the dock of the ss Rotterdam (V) (Photo courtesy: www.verenigingdelijn.nl the association of old Holland America Line employees)

Captain Ruygrok is remembered on the company  War Memorial in Rotterdam (see above) and at the War memorial of his hometown Voorburg/ Leidschendam.  (See below) 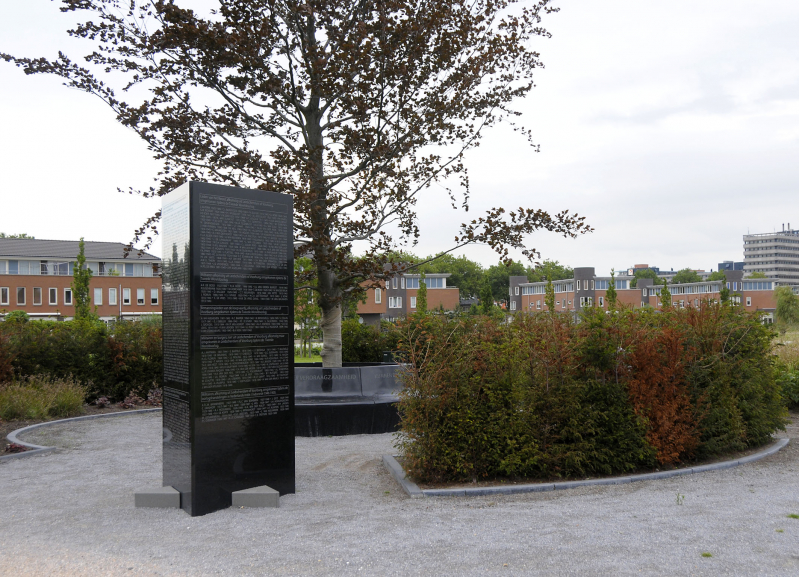 The war memorial at Voorburg /Leidschendam which honours all those who fell during the 2nd world war.The memorial is divided in several sections, of those at home, those at sea, etc. etc. (Photo Courtesy Wikimedia)

In wartime it could take quite some time that letters and other information reached families in occupied Netherlands and hence it is only on 06 July 1943 that the family can announce that Captain Ruygrok had passed away at sea. As there was no body to be buried the only thing that could be done was told hold a Requiem Church service in the town of Voorburg where his wife and children lived.

(d) All other photos from the authors archives unless noted differently.

Due to the confiscation of the Gorredijk   returned with the   Nieuw Amsterdam and on leave.

Gap in Records due to  the new HR administration. From 1937 onwards being filed with the Dutch Pension fund which is not accessible for record review.