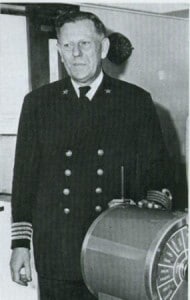 Captain Edouard, Guillaume, Aldophe, Heymans was born on the 14th.  Of June 1910 in Schaerbeek Belgium.

While in command of the cargoship Kerkedyk he arrives on 22 march 1956 in New York while towing the Arendsdyk. This ship had a damaged reduction gear and had no own propulsion..