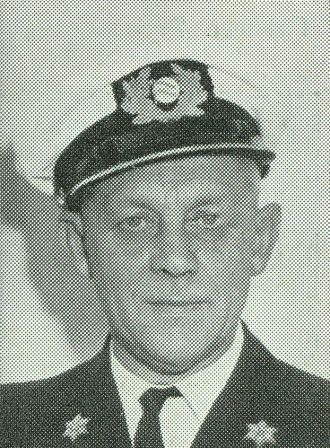 Captain Reedijk in his later years .

Father Gerrit died on 13 April 1929 at the age of 45. His Marie was pregnant at the time and there were already 9 children. In life Gerrit was Principal of the Dr. Woltjerschool in Rotterdam. 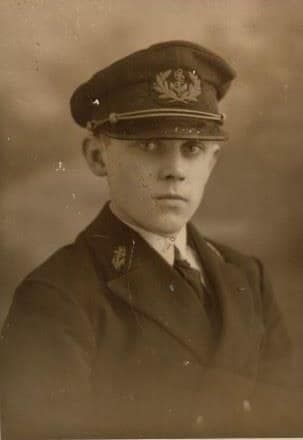 He obtains on 11 July 1930 his certificate as Cadet Officer and then has to go to sea to get his sailing days so he can sit for his 3rd Mate exam. He finds employment with the Holland America Line.   (b)

23 Feb. 1932   Passed the exam for 3rd mate license but dismissed by HAL due to ab over complete of Officers. The depression was biting hard and most of the cargo ships had been laid up. The company operated a last in – first out system for personnel and took no new hires. However there was the arrangement, if times were getting better than those dismissed would be given preference for re-employment. Other companies worked along similar lines. As a result there was no work at all out there for newly qualified Ship’s Officers. Everybody had to survive by different means until times would get better.  Eventually un-employed 3rd officer Reedijk found work from March to Augustus 1933 as a Door to Door salesman of shoe brushes, shoe polish, shoe laces etc.  By August he was fired from the job as he sold his whole stock in one go to a couple who was going to get married. He broke the rule of only being allowed to sell replacements.

However things were getting a little bit better in the commercial world and Holland America was sending more ships to sea. So he was offered a one voyage contract on the ss Veendam (II) shortly after his mis-adventure in the door to door sales business.

This voyage was a regular Trans Atlantic crossing from Rotterdam, via Boulogne Sur Mer and Southampton to New York and back. Captain in command was Cornelis de Korver.

Out of work again he decided to go back to school to finish his secondary education. In those days the higher secondary education in the Netherlands was in steps. You were tested for a certain level of school and for a Maritime Academy you needed 3 years of education at the HBS. However the total course of a HBS certificate lasted for 5 years and therefore it was not a bad idea to complete the course. On 28 June 1935 the exams were successfully concluded.

As things were still not sufficiently perking up in the shipping sector HAL did not have placements available and so Mr. Reedijk now fully qualified enrolled in a training course to become a Police Detective.  He did not followed the footsteps of Sherlock Holmes as HAL came finally docking at the door and finally offered full employment.

The Spaarndam (II) as a blazing inferno. No wonder there were six fatal casualties. (c)

By the time he joined the Spaarndam (II) the world was edging closer to war and when the 2nd world war broke out in October 1939 over Poland, German submarines started to lay mines. Although the Netherlands was neutral in the conflict and thus in theory not affected by the war, mines floated everywhere and where also a danger to neutral ships. The Spaarndam became the 2nd Holland America Line ship which hit a mine on 27 November while the ship was nearing the Downs (close to Dover, England) The Downs were a waiting area for ships which had to be inspected by the British Authorities who were very vigilant that no goods or passengers were carried that could benefit the enemy. The Spaarndam (Capt. F.H Dobbinga) catches fire and eventually sinks in shallow waters. There are six fatal casualties. Reedijk returns to Holland with those who survived.

In January he is called back for his next assignment and joins on the 4th, the Burgerdyk.  The ship left on the 9th. From Rotterdam for a voyage to New York and Boston. On the return voyage it is torpedoed on 10 February in the area of Bishops Rock on the English South coast by the German submarine U 48. A seven passengers and 44 crew are saved.

After return home he is assigned as Watch Officer on ships in port while the regular crew is on leave between voyages. (I assume this was done to ensure that he would be home for his wedding ED.)

On 20th. of  March 1940 he marries Lijntje Schulp. The wedding and the house can be paid for with the danger money he received for surviving both the Spaarndam and Burgerdyk disasters. For each disaster he receives 1000 Dutch guilders (nearly a years wages) and the with the first fl 1000,– he was able to completely furnish his house and pay for the wedding.

Through the years the marriage is blessed with 9 children: Gertje, Nelly, Bert, Marijke, Jan, Willy, Anneke, Ton, and Coby.

On May 10, Nazi Germany invades the Netherlands and he is stuck at home in an occupied country. A good opportunity to return to school and to obtain his 2nd Mate’s license, which exam he passes on 07 Dec. 1940.  After having no official employment for awhile he eventually gets a job (11 August 1940) with an Inspection Commission, which has been called into being to assess the damage caused by the bombardment of Rotterdam during the Invasion of the Netherlands between 10 and 15 May.

On 21 Sep. 1942 he starts working at the Job Finder Office of the Council of Rotterdam. During this period he manages to burn numerous registrations cards of those who would have been eligible for Forced Labor in Germany. Quite a dangerous thing to do as the Germans where actively searching by that time for un-married males who were then send to Germany to aid the war effort.

A sad day occurred when on 14 July 1943 his oldest son Gertje dies 2.5 year old during a fatal accident.

Until 08 Aug. 1945 he was 3rd Officer on the Van Der Capelle, Edam (IV), Philp Wouwerman, Volendam (I), Van der Capelle and the Fort Orange. The Van der Capelle was the first Holland America Ship (in charter) to return to Rotterdam on May 23, so it can be assumed that Reedijk joined the ship around that time.

Holland America needed new tonnage after the war and started purchasing a large number of cargo ships, so promotion was fast as long as you had the paperwork. Thus he returns to school in 1948 and passes on 10 July 1948 his Chief Mate’s License. 10 days later he is promoted to Eerste Stuurman (Chief Mate or First Officer) and is assigned to some of these newly acquired ships.

Then he sailed on the following ships. 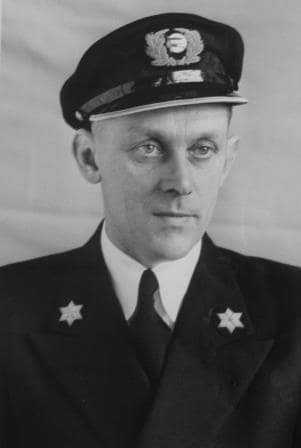 As Captain when freshly appointed.

Promotion to Captain follows on 09 Jan. 1952 with his first being the Blommersdyk.

As captain he sailed on the following ships until Aug 1961:

Then follows a transfer to the Soestdyk on 20 January 1953. This ship was employed in the New York Dutch East Indies route around that time and as crew was only relieved in Rotterdam, Capt. Reedijk was suddenly away for year as the ship did two  round voyages in a row before it returned to Rotterdam.  (d) 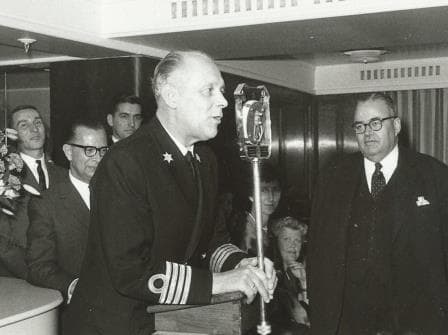 With growing senority comes the transfer to the passenger ships and after 15 Aug. 1961 he finds himself in command of the Noordam (II), Ryndam (II), and Groote Beer. 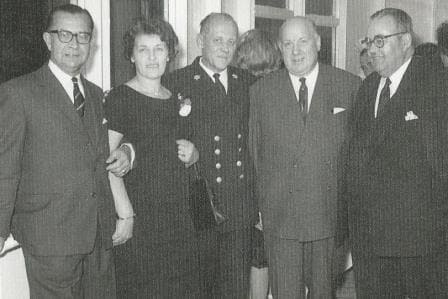 Mrs. Reedijk next to the Captain. The big man in both photos was the then Director of Holland America Line, mr. Van Houten. (f)

There are no dates or occasions mentioned on these photos but looking at the background it might have been on the Noordam (II).

Holland America finally moved from Hoboken across the river, to Manhattan when it leased a new pier constructed by the New York Port authority which had been built replacing a few older and smaller piers. The Pier was opened on 24 October 1962  and the Katsedyk  was the first ship which docked at the new Holland America Line Pier shortly after. 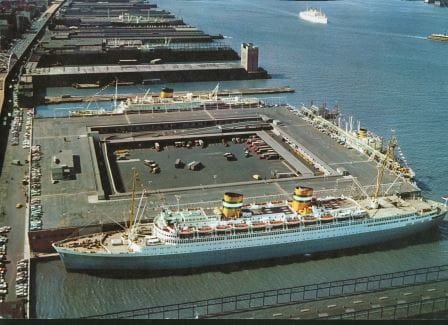 Pier 40 in New York.  The  docks of Holland  America  after they left Hoboken.

This photo shows Pier 40 with the ss Nieuw Amsterdam (front), ms Noordam (side) and ms Oranje (top) docked at this occcasion in New York.

(f)Crown Princess Beatrix visited the Pier on 22 April 1963 when she paid an in-formal to New York. While she was there, there was the rather unusual situation of also having the ms Oranje docked at the HAL pier.  This ship was owned by the Dutch company Stoomvaart Maatschappij Nederland (SMN) or Netherland Line and made a charter voyage to New York under HAL manangement. 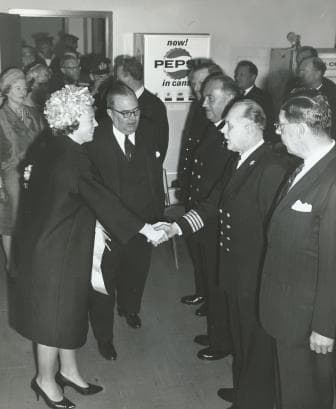 Being presented to the future Queen of the Netherlands, Crown Princess Beatrix. (g) 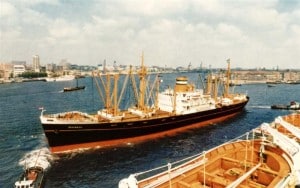 The Schiedyk which was mainly employed on the Pacific service to Vancouver. (h) 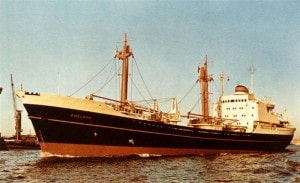 The ms Poeldijk. This was a more unusual ship for the company. It was a one off bought after completion from the shipyard.  And one of the smallest ships in the company, but a very happy ship. Liked by all who sailed on her.

He retired in 1970 but unfortunately retirement was short as he passed away untimely on 04 June 1972 due to a traffic accident.

For those who visited him on board would clearly remember the series of 9 photos of all his children in a row. 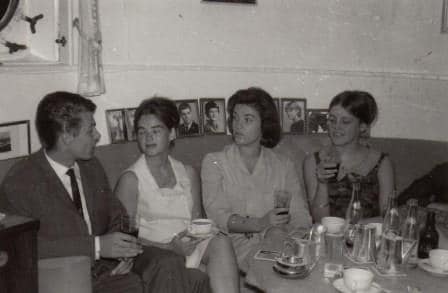 Some of them must have liked what their father told them about his ships and the company, because:

With a big thank you to Mr. Bert Reedijk who provided much of the above information.