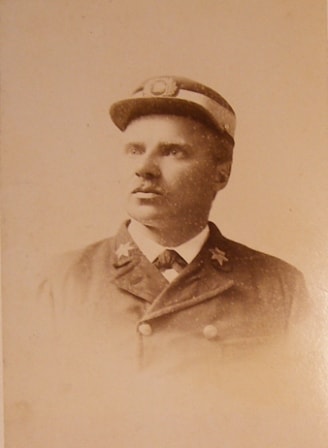 Kapitein Jan Taat was born on 14 March 1850 in Katwijk aan Zee. Which was and is a small fishing village  to the South West of Amsterdam, directly on the coast of the North Sea.

His fathers name was Willem Taat, and his mothers maiden name Jacoba Hus. (e) (Editor: Although Hus is a very common name in the fishersmen’s world, I wonder if there might be a connection to Captain Jacob Hus, the first captain of the company.

He was one of the first navigation officers who started their career with the company in 1874. Although no records have been found yet, it can be assumed that he had his early training under sail before switching to steam.

In 1875 he married Leuntje Petronella Parlevliet in his home town of Katwijk.

He joined the company in 1874 and climbed the ranks in four years time, from 1874 to 1878, from 3rd officer to Captain.  He was appointed Captain of the ms Maas in nov. 1878  and then send a year later to oversee the construction newbuild of the ms Amsterdam (I) in Dumbarton, great Britain.

In October 1881 he was assigned to the Edam (I) and was in command when the ship had a collision with the ss Lepanto in 1882. The Edam sunk.

In the meantime he experienced the horrible weather of the North Atlantic. During the 2nd voyage, departing from Rotterdam on 2 January. On board 8 cabin and 200 steerage passengers. On Jan 13th. the chief engineer reported that the propeller blades were starting to fall off and the next day all were lost. By hoisting the sails about 6 knots of speed was made and the ship proceeded slowly. Then a severe storm broke out causing sails and masts to be blown overboard and as it was freezing badly, several officers and crew  experienced frost bite. The emigrants had to be locked inside the ship to avoid them from being swept of the decks due to the seas running over the heavily rolling ship. Several other ships ignored the requests for help while the ship was drifting perilously close to Nantucket Shoals. Finally an English ship, the ss Napier (Capt. Anderson) takes the Edam in tow and delivers it to New York on  January 28th.  All passengers were found to be in good shape on arrival. the Edam then went into dry – dock for a hull inspection and to receive anew propeller. (d)  The ship then left New York  for a regular return voyage and arrived on 22 March in Amsterdam. The ship continued on alternative departures from Rotterdam and Amsterdam to New York.

On 21 September the ss Edam (I) was then hit by the ss Lepanto in the middle of the hull and breached under water causing it to sink in 25 minutes. On board were 21 passengers and 47 crew. 2 Engineers drowned.

In June 1884 he testified in the court case regarding this incident and was cleared of any blame.  In the mean time he had been put in command of the ss Edam (II) in Dec. 1882.

This was to remain his regular ship until he was transferred for a fill in to the W.A Scholten on 16 November 1887.   This transfer was supposed to be for one voyage only to fill in for Capt. Bakker, the regular Captain who was ill of the ship and could not sail.

On 19 November 1887  the W.A Scholten had a collision with the  ss Rosa Mary near Dover. The ship sunk for a large loss of life. 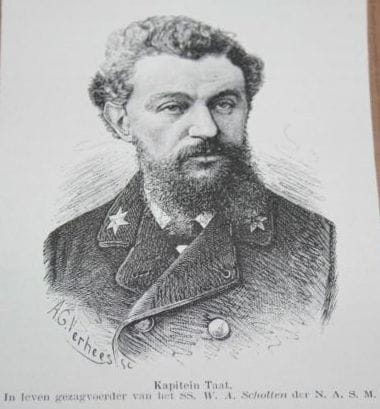 (c) Stamboek 580 Hal Archives as held by the City Archives of Rotterdam.