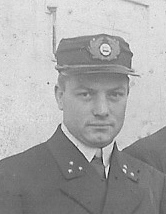 Most likely he went to school in Schiedam and later Rotterdam as that was his home town. However there is no archive from the Maritime School in Rotterdam from before 1936. The company archives also do not indicate which Nautical School he attended.

He joined Holland America on 31 July 1903 as cadet on board the ss Rijndam (I). Followed by two periods on the cargo ship Sloterdijk (I) and then back to the passenger ships, in this case the ss Potsdam. 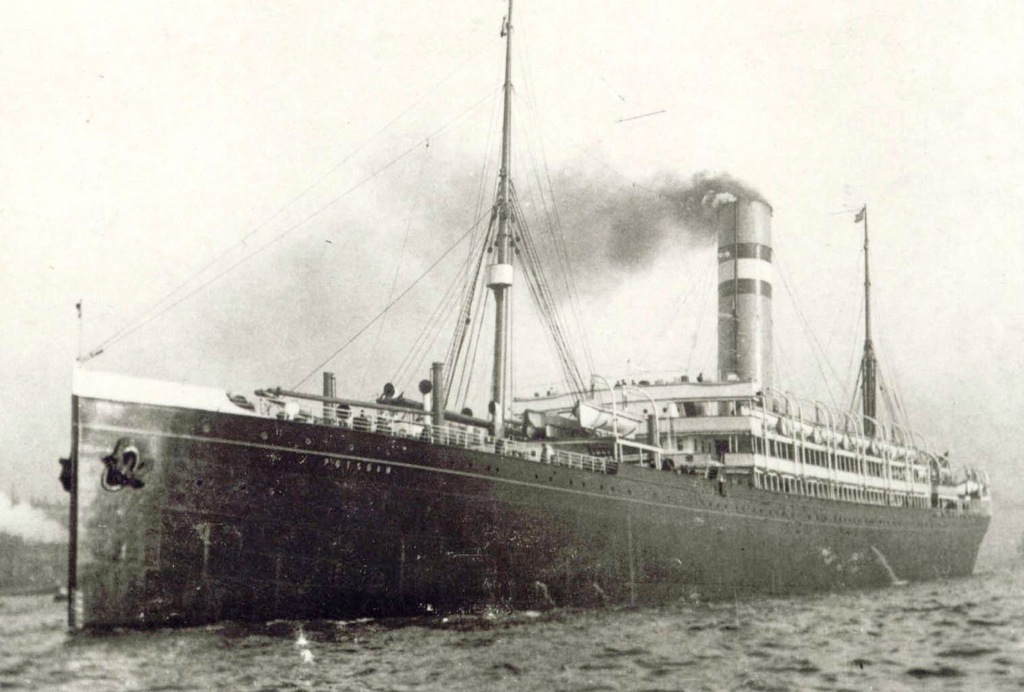 While assigned to this ship he is fired from the company on 8 August 1904. . The company archives indicates this was because of a “boyish prank”. But even it being a boyish prank, a Gentleman company like Holland America could not tolerate this and he had to go. The Archives indicate that he was dismissed because he:

Kicked in the door to the doctors office when he could not find the key fast enough.

The records do not tell why he did this. It can be assumed if it was to save a life then the company would have looked at it from a different point of view. 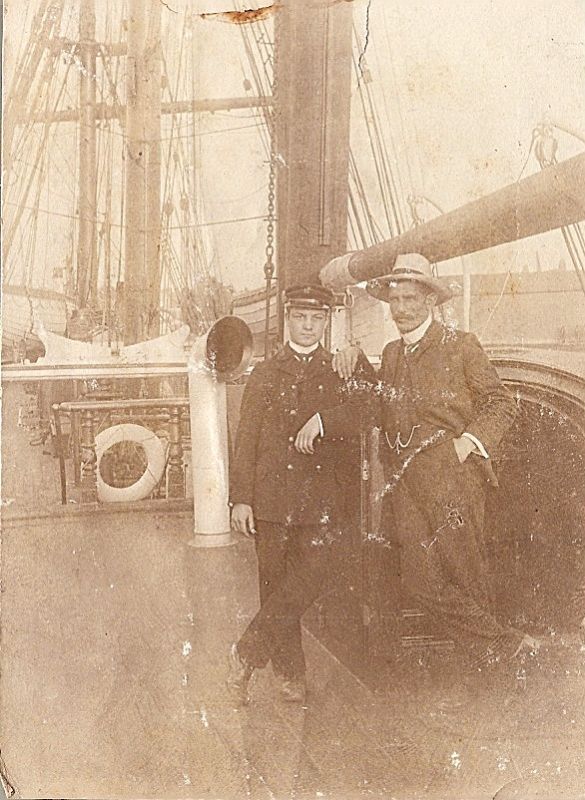 Cadet or 3rd Officer Sjerp. As his cap emblem is not  a HAL logo  I assume this photo was taken when he started his career with the Japan-China -Japan Line or during a ships visit when he was at his Maritime School. (a)

However by this date he had completed his 365 days at sea and thus he could sit for his 3rd Mate’s exam which he passed passed in December 1904.  Going back to the HAL was not possible so he joined the Dutch Java-China-Japan Line which was an Amsterdam based company operating in the Far East. Here he remains until 1909.  In April of that year he obtains his 2nd mates certificate and applies to Holland America again. The company was expanding around that time and thus they needed more officers. As a result he was signed on again and joined the cargo ship the ss Zijldijk. 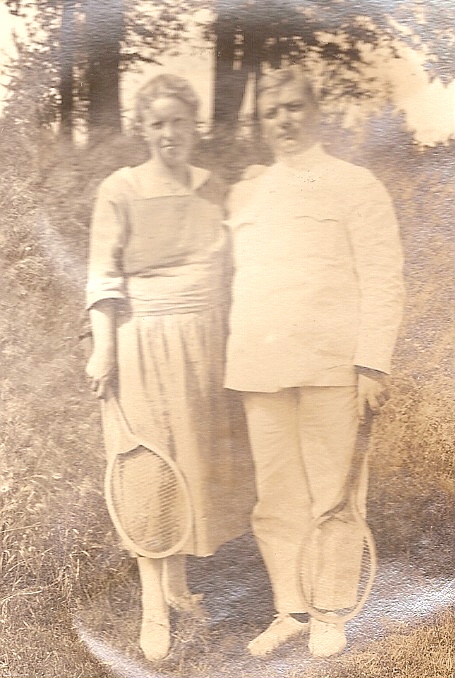 David Sjerp and his wife. Date and location of photo unknown. But Sjerp is in white Officers uniform. (a)

Bastiaan or Bas but also called Bob (by the nearest family)  went to the Air branch of the Dutch Royal Navy (Naval Air Service) and became commander of the Navy Airforce Base in Valkenburg and lateron of the whole Dutch Naval Air Service  (f). He served with distinction in the war in the Dutch East Indies and served from 1944 onwards in the RAF.  Decorated twice with the Dutch DFC.

With the first world war in play and many ships laid up and some later confiscated by the USA, David Sjerp, is one of the lucky officers who is more or less constantly employed alternating between cargo and passengers ship. 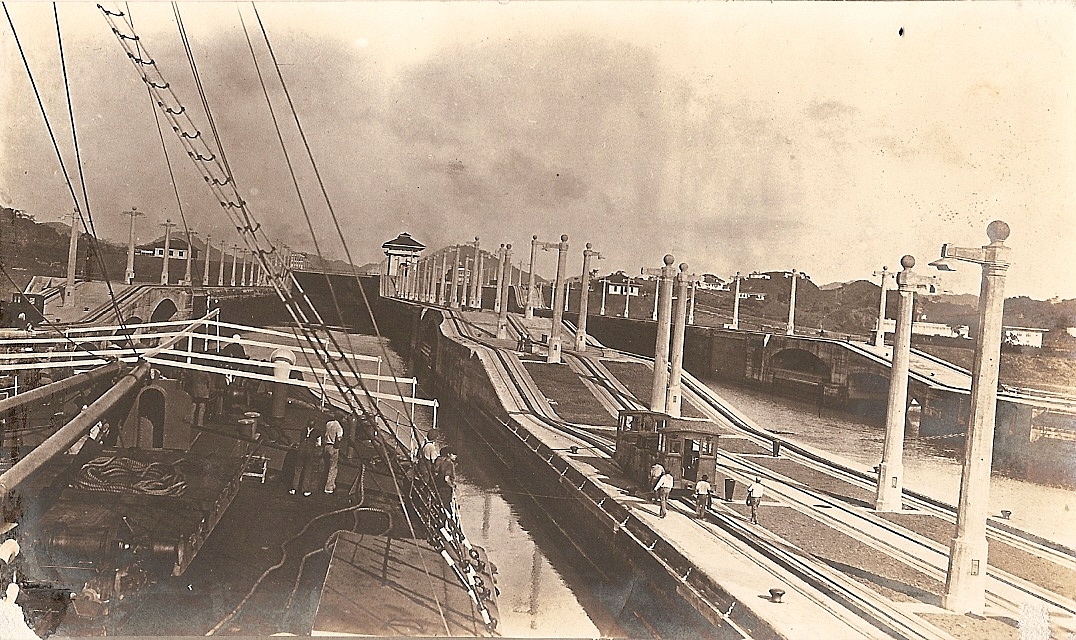 Here a photo taken from the bridge of the ss Veendijk while in the Panama Canal. The photo comes from the family album and was most likely taken by the Captain himself as it was only with this ship that he sailed through the Canal. (a)

As soon as the war is over, he is assigned to the “long run” which meant being away for a whole year. Thus he sailed as passenger to New York on the Noordam (I) , joined the ss Veendijk as Chief Officer, sailed on her for a year to the Far East and then returned as passenger to Rotterdam on the Nieuw Amsterdam (I). 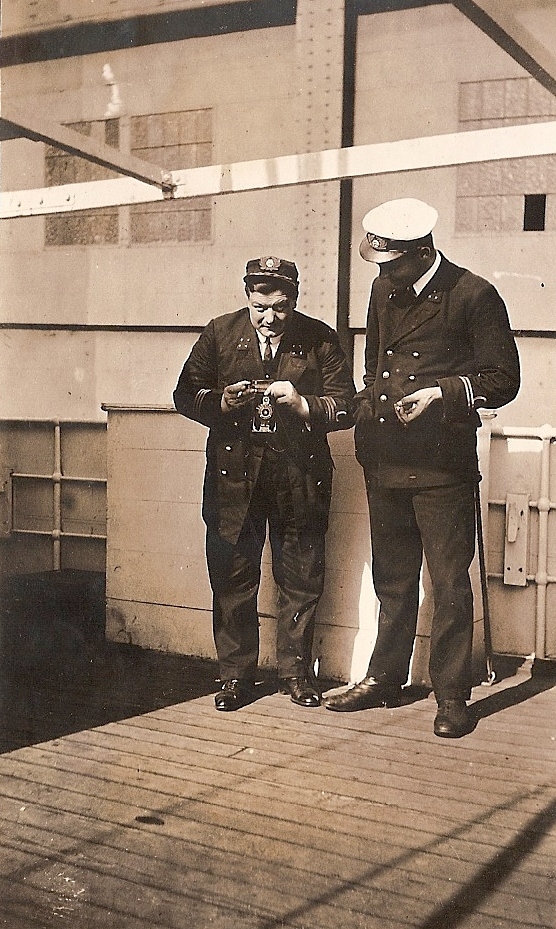 Captain Sjerp enjoyed photography. We see him here as Chief Officer (see 4 pips on his revers) taking a photo. However he has a gold braid along the base of the cap so this might be taken after his promotion to captain. Cargo ship captains did not always go to 4 stripes on their uniform. Please note the officers caps. The 2nd Officer to the right is wearing the new version, while Sjerp still has the old one. This dates the photo to the late 20’s. (a)

By  1921 the company had taken a share in the VNS or United Netherlands Steam; a joint venture of several Dutch company’s to fill the gap in the Dutch services as there was no dedicated company sailing to (South) Africa and making loop voyages to the Far East. Each company brought in one or two ships which were then later officially bought by the VNS. Also crew was supplied until the new company could deal with it. As a result he is sent as Chief Officer on 01 November to the ss Bovenkerk (*) and within a month promoted to Captain. (* The naming system of this company was KERK = Church endings for their cargo ships and FONTEIN = Fontain ending for its passenger ships). 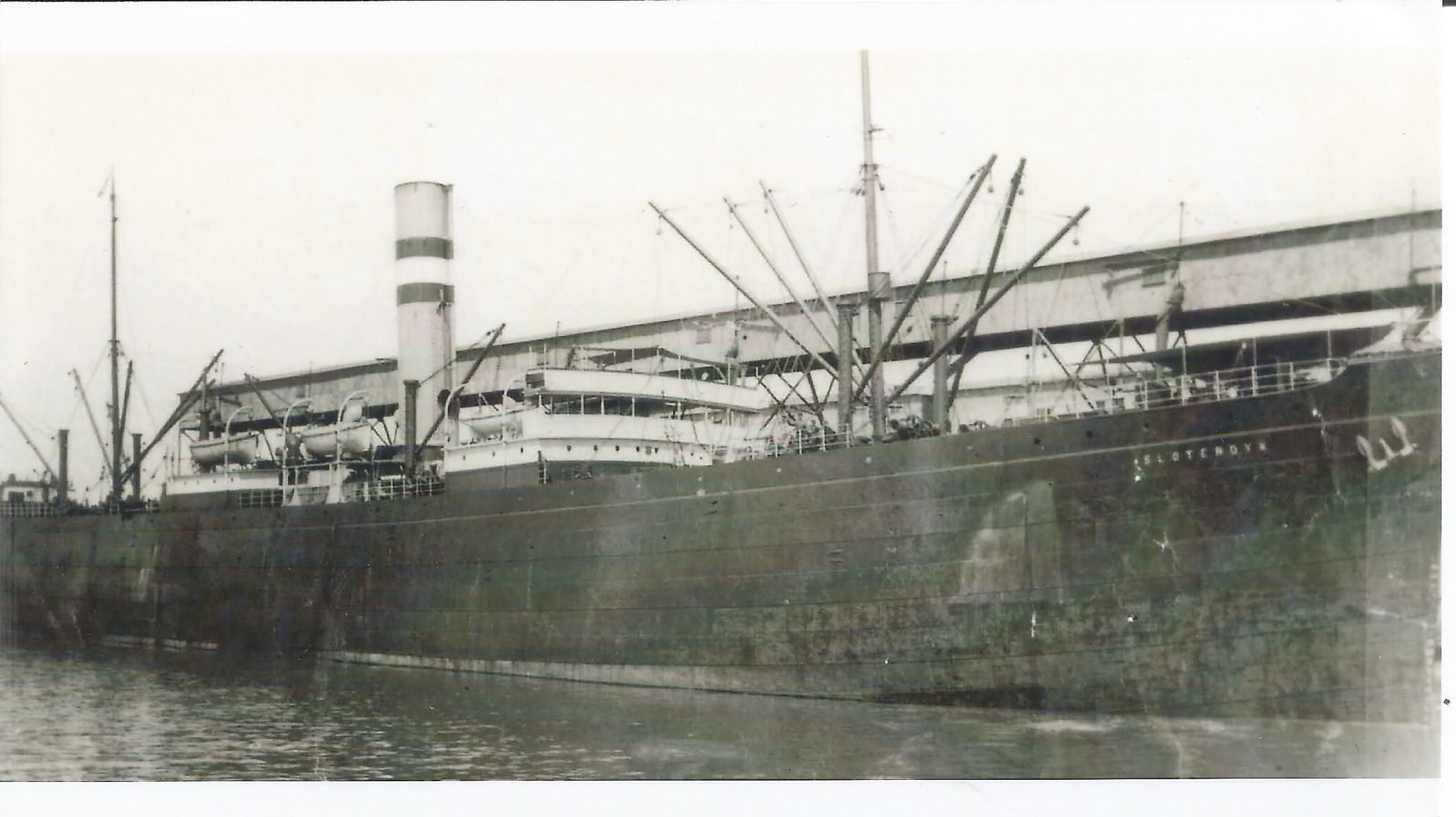 ss Sloterdijk (1) Built in 1901 as one of the first purpose built cargo ships by Holland America. Apart from carrying cargo the ship could accommodate 350 head of cattle.

Here he remains for 2 years and then returns to HAL as Captain on the ss Sloterdijk (1), the ship he was cadet on in 1904. From then onwards he spends most of this time on the B Class cargo ships of the company. These ships had been added to the fleet in the years after 1923.  Again he is the lucky one as with the world’s economy in the doldrums many officers were laid off but Captain Sjerp kept sailing.  By December 1929 he is back on the Bovenkerk, on loan, to bring the ss Bovenkerk back to Rotterdam. For this he had to wait almost a month in New York after having arrived there a passenger on the Nieuw Amsterdam (I)

Then it is back to the B class cargo ships which were mainly employed on the short routes from Rotterdam to New York and the USA ports on the Eastern Sea board and also to the Gulf of Mexico, Florida and Cuba.

On 04 June 1931 he is awarded the Silver Medal of the Dutch Royal Meteorological Society for maintaining and submitting  Weather Journals. 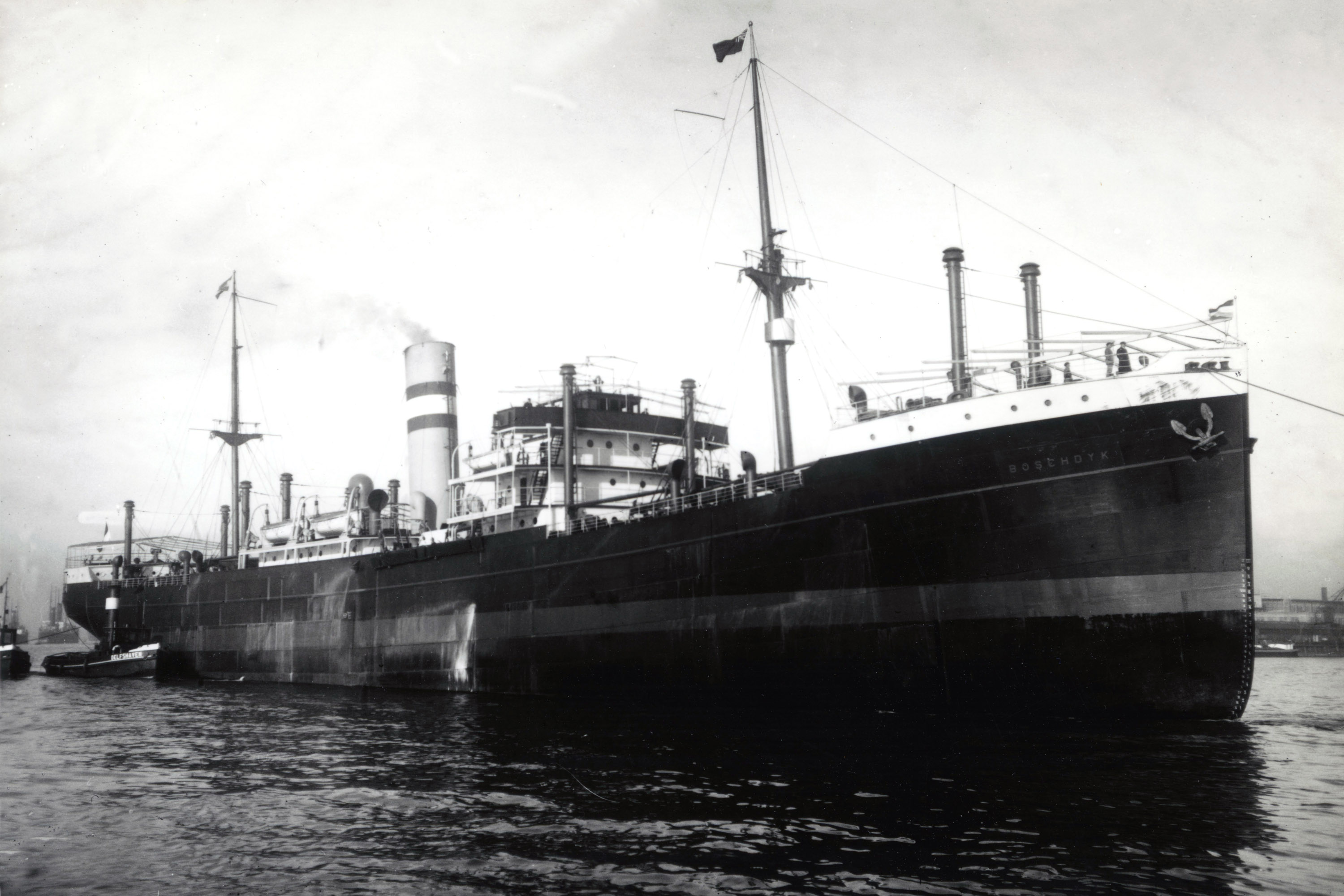 The ss Boschdijk. built as one of a series of 10 cargo ships in the 1920’s. She was mainly employed on the North Atlantic service to the East Coast of the USA and the Gulf of Mexico. In May 1940 she was docked in Rotterdam when the Netherlands was invaded and she caught fire during the battle  in the port. She was then scrapped. (e)

On 16 September 1931 the ss Boschdijk departs from Rotterdam for a roundtrip to Cuba and the Gulf of Mexico. The ship calls at Antwerp in Belgium and then sails to Havana, where it arrives on October 04. Just after arrival he suffers a stroke and is taken to hospital in Havana,. The Boschdijk sails on with the Chief Officer in command and calls at Vera Cruz, Tampico – Houston – Galveston – New Orleans and then returns to Havana. There on 05 November he reboards his ship but as a passenger for the journey back to Rotterdam. He is now partly lamed and can move one of his legs very slowly. Upon return home he is put on 70% wages, waiting for medical assessment.

Captain Sjerp was forced to retire on 01 April 1932 as his physical state did not allow it for him to continue sailing. Once the retirement grant of the company ran out he had various odd jobs. Times were not easy as the depression was at its severest and for each job available there were 10 able bodied persons waiting in line. The family moved from Den Hague to Kijkduin which in those days was a small village on the outskirts of the large city and a fishing village and summer bath resort.  In the end he found work in running a bicycle parking shed.(Believed to be near the beach). The house and road they lived at was destroyed by the German occupier when the “Atlantik Wall” was extended to stop the Allied Invasion. So they had to move  which made the family live even more difficult.

He passed away on 14 Aug. 1945 at Zutphen, where he and the family had ended up after having been evicted from Kijkduin. His wife did not survive him for long and passed away a year later. Both were buried at the Old Grave Yard in Zutphen. (b) 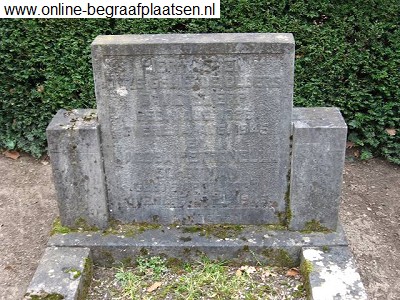 08 Aug. 1904      Dismissed due to a boyish prank. (Kicked in the door to the doctors office when he could not find the key fast enough)

Returned to the company after having served with the Java – China – Japan Line.