Johannes “Jan” Reinier Abelskamp was born on 27 July 1911 in the city of Arnhem, which is located near the German border. His father was working as a Lithographer in this city. His name was Derk Jan so it is not exactly clear where the names Johannes Reinier came from.

Between 07 may 1913 and 11 October 1915 the whole family lives in Amsterdam, after a short spell in the city of Utrecht but then moves again and now to Zupthen also in the East of the Netherlands. However the parents must have returned to Arnhem sometime later as in 1941 his father is noted as living in Arnhem again.

He follows his maritime training at the Navigation School on the island of Schiermonnikoog in the far north of the Netherlands. Way is unknown, as it is much harder to travel from there to Arnhem as from Amsterdam or Rotterdam which is only a direct train ride away. (ED: looking at the school photo below, where he is in civvies, it strengthens belief that he had family on the island so he did not have to stay in the schools dormitory and wear a uniform. 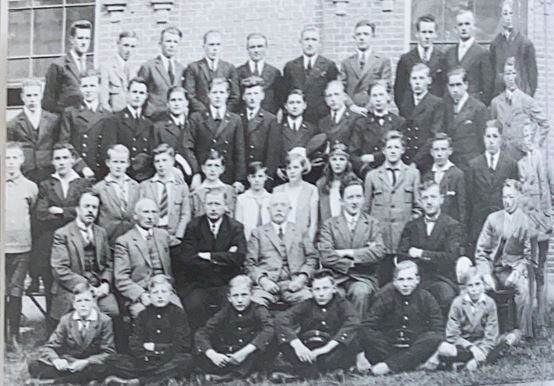 School photo o 1928.  Jan Abelskamp can be seen on the far right in the 2nd row from the top. The younger children (including the girls) where part of the 2nd secondary school level which was located in the same building and shred the teachers. (e)

He then joins the Holland America Line on 19 September 1929 as cadet and is assigned to the Veendijk. Then the Wall Street crash occurs and after obtaining his 3rd mate’s certificate he can not go back to the HAL as there is a personnel stop but is put on the list of “Prospective Officers” in March 1931 . He will have more than 5 years before there is an opening again. 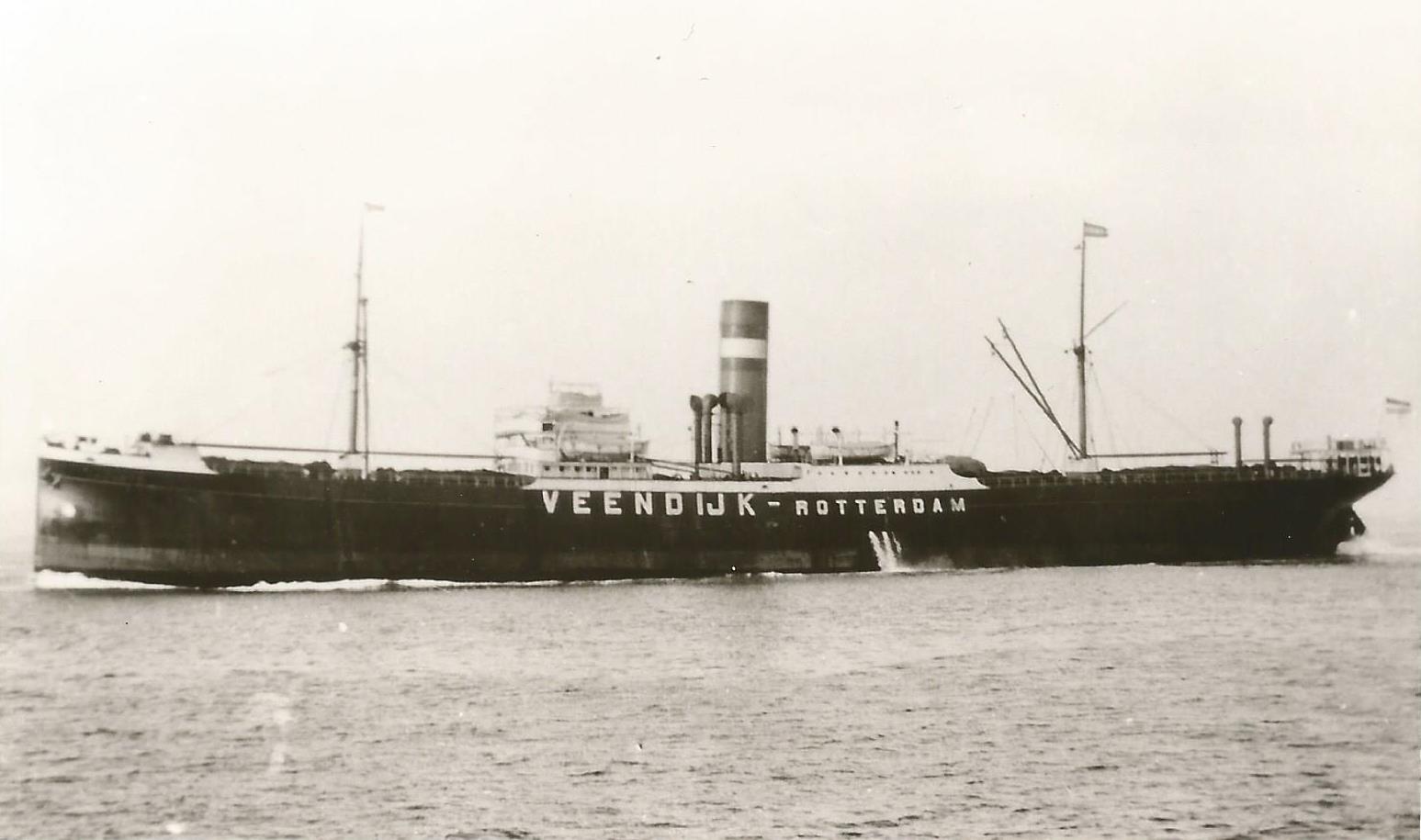 The ss Veendyk.  This ship entered service in 1913 and the photo shows the ship during the First World War with the neutrality letters on the side of the hull. The future captain Abelskamp sailed for 9 months on this ship between September 1929 and June 1930. (e)

GAP It is unknown as of yet what de did in this period. There is some un-confirmed information that he took a job as a sailor on a local coaster.

On 30 October 1936 he is hired on temporary basis as 4th. officer and assigned to the ss Veendam (II). This assignment is made permanent 3 months later when he is assigned to the ss Maasdam. Promotion to 3rd. officer follows in 1937  with an assignment to the Breedyk. Holland America now had its whoel fleet back into service and was working on fleet expansion.

Because there are no public records for the period after 1937, it is not known yet which ships he sailed on between 1937 and 1940.

we know he was sailing on the ss Edam when they collected the survivors of the ss Breedyk which had been hit by a mine. These survivors were taken back to Holland and as the ship was filled to capacity, they officers on board doubled up to provide sleeping space.

But then war records indicate that he was assigned to the ss Volendam (I) by April 1940. He will spent the first four years of the war on this ship. The ship is taken into ware service on 10 May 1940 when Nazi Germany invaded the Netherlands. One of the first actions the ship is involved in is, is the transport of Children from England to Canada to et away from the bombardments.  While on this mission, the ship is torpedoed on 31 Aug. 1940 by the German submarine U-60.

In spring 1941 he finds himself ashore in Falmouth to obtain his 2nd Mate’s license. Then sometime before he must has met a British Lady as by 31 August 1941 he starts sending monthly allotments to a Mrs, Dorothy Shaw of £  42.10 which was increased to £ 60,– on 31 Jan. 1945.  She is noted in his war record as being his wife and the address at that time: “The Savona” Mount Suard (or Mount Stuard) Road, Rothesay, Isle of Bute, Scotland.   (ED: the address still exists but it would need a census search to trace anything further. She also received a back payment started on 08 Aug. 1941 so did he marry during his study period after April 1941.

GAP no sailing information until he made captain in

on 22 March 1950 he is awarded the “The Ruyter” medal in silver. This medal in gold and silver is the highest recognition given out by the Maritime Industry outside the Government. On 12 January 1950 while on watch on board the ss Almdyk he hears screams coming from the water while passing Sheerness on the Thames. He discovers a number of people in the water, warns the captain and orders a boat to be lowered. The weather is foggy but calm but there is a strong current running in the Thames.  Due to the careful watchkeeping of Chief Officer Abelskamp, six people are saved. They turn out to be crew members of  HMS Truculent. If he had not heard their screaming they would not have survived in the cold and fast running water. 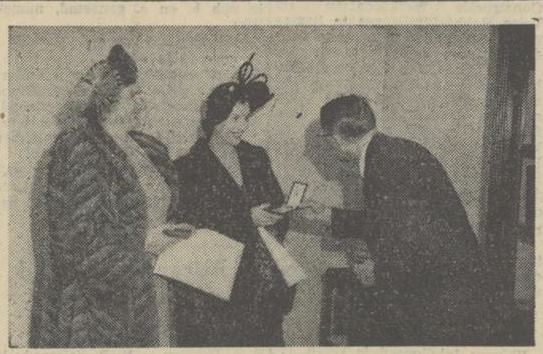 The hand out of the silver “De Ruyter” medals. As both Captain Dekker and Chief Officer Abelskamp were at sea, the wives were invited to come to The Hague to receive the honours. Left Mrs. Dekker, middle Mrs. Abelskamp, right Minister of Shipping Mr. J.J Oyevaar.  (copied from contemporary newspaper)

This British Royal ship was returning to Chatham after a trial trip with a full crew on board and 18 dockyard workers. at 19.00 hrs. She collided with the Swedish Oil Tanker Davina who was outbound for Ipswich on the English East coast.  57 crew were swept away in the strong current; 15 survivors were picked up by the Davina and five by the Almdijk.  most of the crew survived going into the water, but then froze to death on the mud lands of the banks of the river Thames. In total 64 men died. the ship itself was beached but later sold for scrap. The later inquiry put 75% of the blame on the navy vessel and 25% of the blame on the merchant ship. (c) 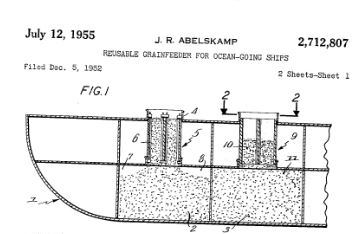 Then his name appears in 1952 when he registers an application for a patent for a Grainfeeder for ocean going ship. (e)  There seems to have been problems with loading ships evenly with bulk cargos such as grain when the ships were loading at anchor on at docks which were not protected from the ocean swell. The ship would then continue to roll or pitch alongside the dock. This could then result in a listing ship during loading or a shifting cargo when the ship left the dock and its movement would change when the cargo started to fill up open spaces in the cargo hold. The idea of this grain feeder was that the pressure of the grain itself in the pipe would provide such a momentum of the grain when coming out of the pipe that is would be pushed to all corners of the cargo hold and evenly fill the whole hold, even with moving ship. It is unknown if this machine was ever constructed and used.

Promotion to captain follows in

years 1962 and onwards. ED: have to found any sailing records yet.

15 Mar. 1931      Added to the list of prospective officers, but dismissed due to the situation of the times.