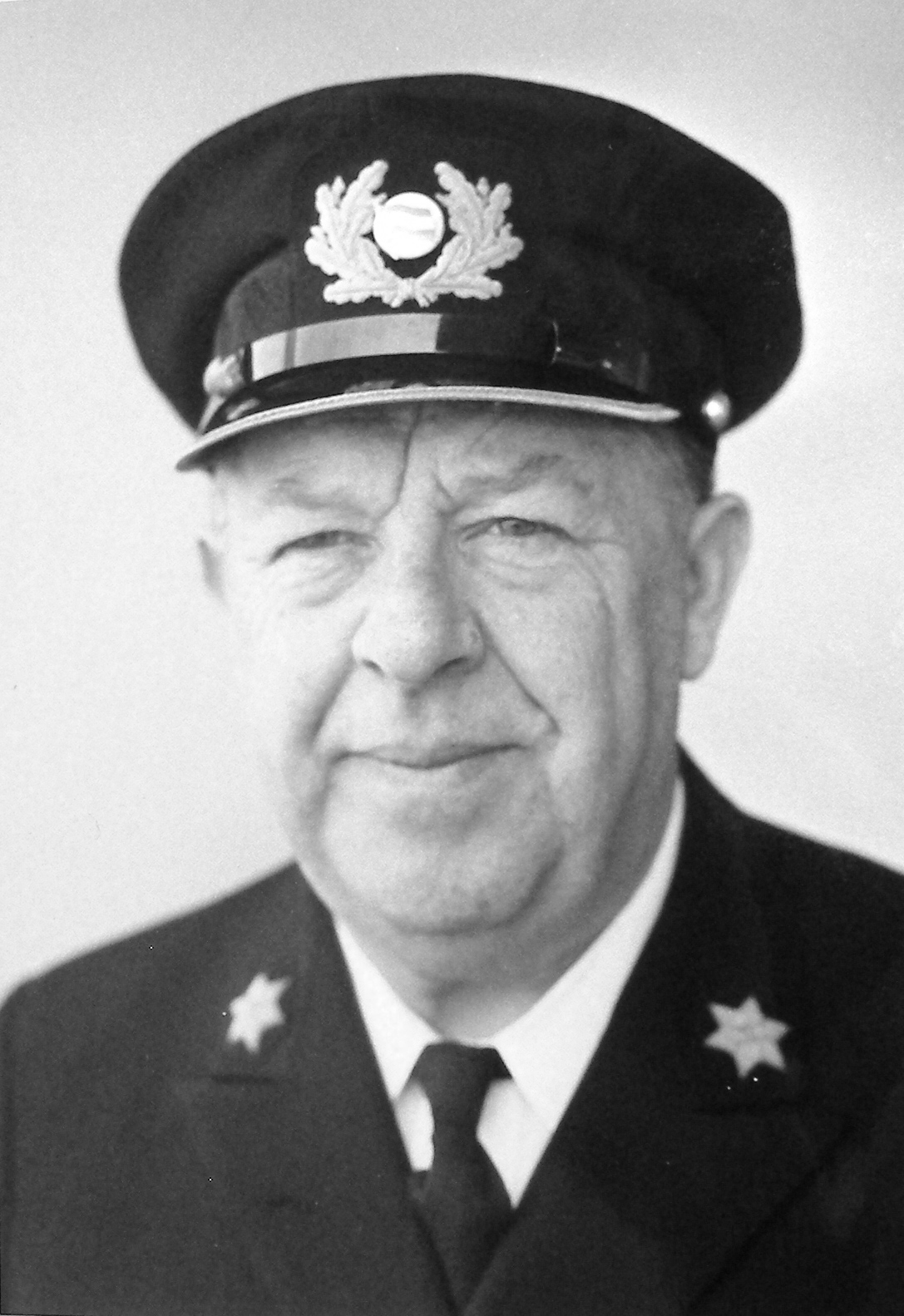 Captain Nicolaas Pieter Kruithof. This photo was taken around 1952 at the time when the company had all captains photgraphed (b)

Note: his war record indicates the town of Kruiningen as his place of birth. This is just outside the town of Hansweert. According to people who sailed with him it was Wemeldinge, as he required the ship to give 3 long blasts as a greeting when he sailed by. But these towns are all close together.

Son of Johannes Kruithof and Janneke Elisabeth de Nooijer. His father was Adjunct commisario of the Customs office in Hansweert. (Located on Zuid Beveland in the Province of Zeeland. This was often the last stop for small sea going vessels and inland river barges before they crossed over the “Westerschelde into Belgium) (a,b)

Student of the maritime school “Willem Barentz” at Terschelling and on completion of his studies joined the Holland America Line on 03 Oct. 1922 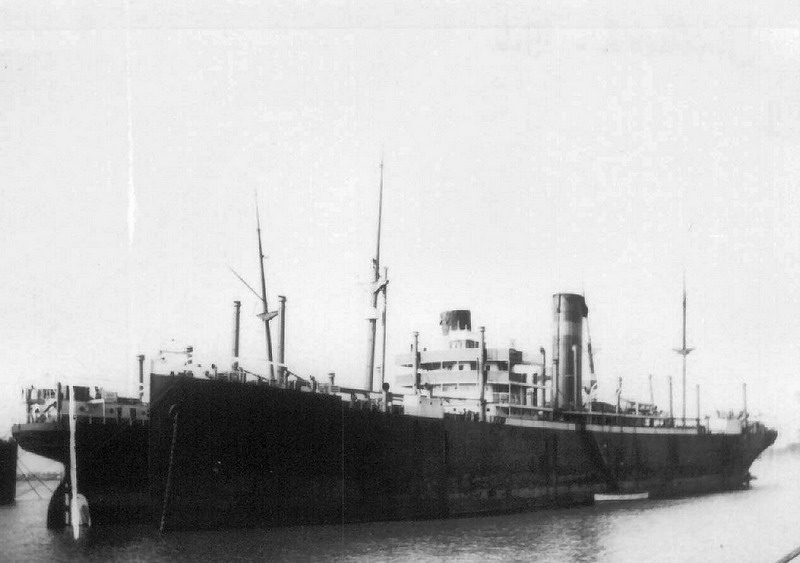 The cargo ship ss Ijseldijk. Seen  here laid up in Rotterdam togehter with another Holland America Line cargo ship. The ship had been built in 1915 and was transferred by the HAL to the VNS in 1926, a joint venture of several Dutch shipping company’s.  ED.: when in the sailing list below says that he spend time as cadet on a VNS ship, I suspect that he stayed with the ship when it went over, and then came back to HAL again.

Because having been laid off in the period 1930 – 1935 his career progressed much slower than his colleagues who stayed on. It was only in the war that he caught up with them, as he already had his master license.

It would be nice to find out how he kept himself going during the depression years. 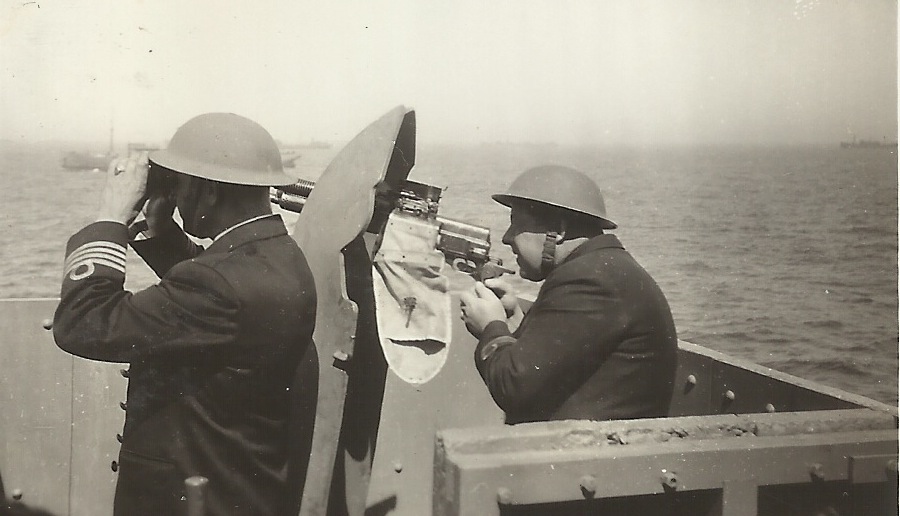 Captain Dobbinga to the left as “tracker” an 2nd Officer Kruithof to the right as “Gunner” keeping the enemy at bay. (e.f)

He spend the whole 2nd world war at sea, having left Rotterdam in April, with the Noordam, just before the invasion of the Netherlands took place.  Pictures of crew in wartime are quite scarce, so as Editor I feel quite privileged to publish two of them which not P.R photos.  One is with Captain Dobbinga Sr. at one of the Anti Air Craft stations on board the Leerdam. With then 2nd officer Kruithof shooting at the enemy. For this work the ships had gunnery crews on board, while the deck officers where the liaison officers between the Bridge and the AA station. 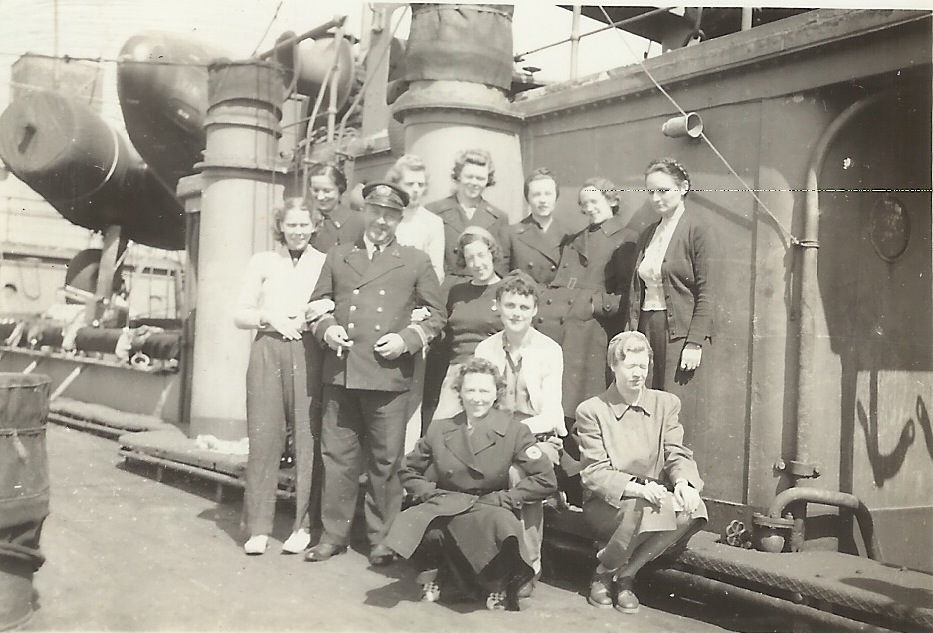 Although the war was grim, there were lighter moments such as here. 2nd officer Kruithof surrounded by  11 beautiful Red Cross nurses, sailing with the Edam from New York to Liverpool. Note in the background an airplane that was part of the cargo, as the Edam was a passenger cargo ship. (e,f)

He was promoted as part of the wave of new captains needed when Holland America bought the A class cargo ships at the end of the war and as such his name comes up again in the records in May 1950 when he is appointed Master of the ss Aalsdijk. 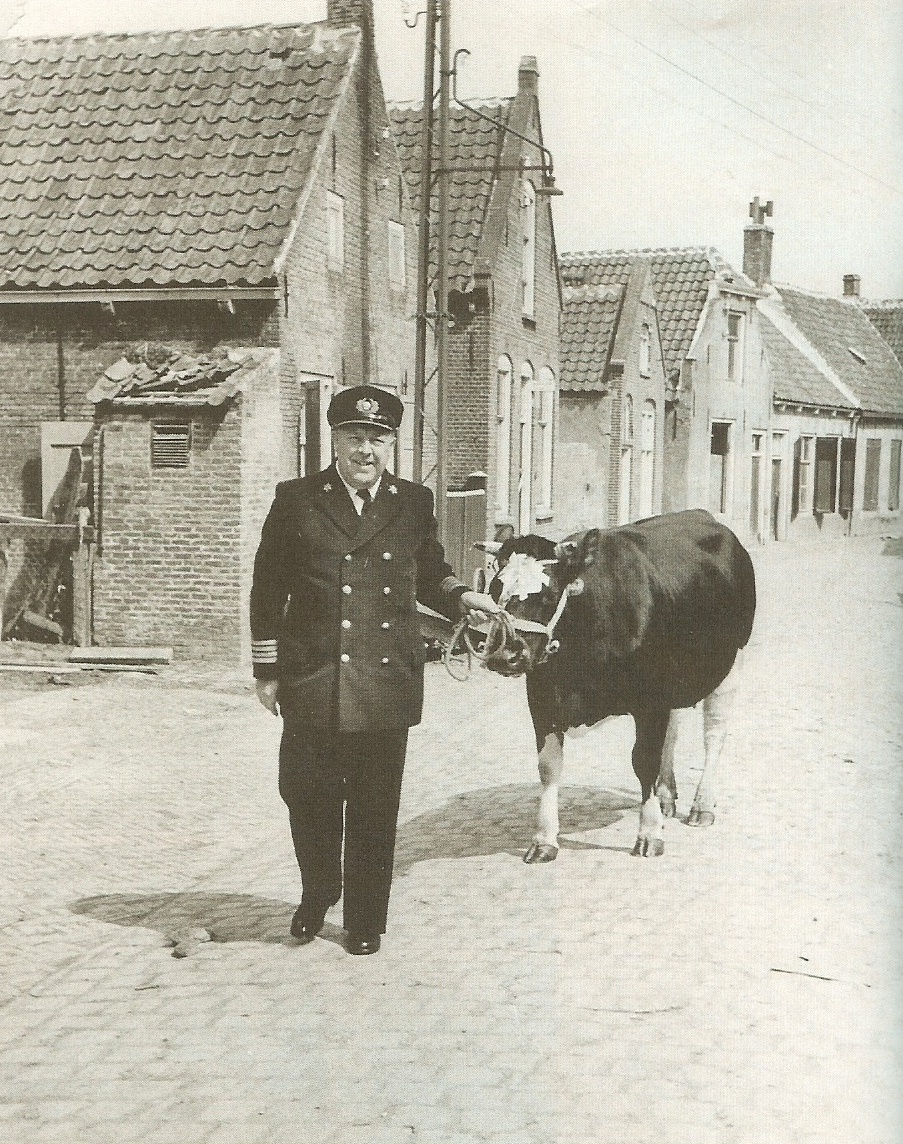 Captain Kruithof with “Aagje” the cow in the main street of Stavenisse.(c)

He is in the newspaper in 1953 when the whole world donates goods and money to the Netherlands after the severe floodings of the South West part of the Netherlands.  The crew of the Aagtedijk collects money and buys a cow which is christened with the naam Aagje. (The ships company wished that the cow should go to somebody in Stavenisse. Via a procedure unknown, the cow is allocated to farmer / milkman Pieter Stoutjesdijk of the town of Stavenisse.  Captain Kruithof as master of the ss Aagtedijk is dispatched (together with a Provision Master, a 4th. Officer and a Bo’sun) and accompanied by his wife to present the cow on 01 May, in the presence of the local mayor and his wife, to the new owner. After an official presentation with the mayor in charge, Captain Kruithof walks the cow to her new stable.  (See photo)

His career this follows the regular path of ship transfers and eventually ending up on the Noordam and Westerdam. Due to the gap in his career he lacked the seniority to reach the Nieuw Amsterdam as the final ship but finished his career on the Westerdam. After 10 years of retirement he passed away 14 Dec. 1972 in the village of Tholen at the age of 70. Tholen is a town in the same region of Zeeland as Hansweert.

What did he do during this period.

Transferred to Blommersdijk in Galveston due to illness of L.J. van der Graaf who went to Binnendijk to be taken home.

Gap in the archives, to be ascertained later.