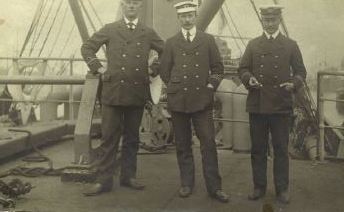 Then Officer Reifferth. (Center), for the company he sailed for before Holland America. We have not been able to find out yet which company.  (b)

Captain Reifferth was born on 20 Oct. 1888 in Hildesheim Germany as son of Anna Rosette Martha Reifferth. We could not find any details about the father so maybe he was deceased. Sometime after  his birth young Josef came to the Netherlands and I believe he was part of a larger wave of Germans who came to (especially) Amsterdam and Rotterdam due to the upswing in the Dutch economy, especially in the ports. The later Captains Braun and Augspurg were also part of this “German invasion”.  On 10 June 1919 he was given Dutch Citizenship. If there had been a father around then the father could have applied anytime for the whole family. Now he had to wait until the year he turned 30.

For unknown reasons, maybe financially, he did not go directly to a Nautical School in one of the ports but went to sea as a sailor. The company records then give that the obtained his 3rd Mates license on 18 July 1907. His 2nd Mates license on 26 March 1913 and his 1st Mates license on 26 Sep. 1913. In this year he also obtained a license for Assistant Radio Officer on 9 April 1913. This was a certificate which was not so important for Holland America but much in demand on the cargo ships.  Holland America archives do not divulge where he sailed before he joined the company.   But he did join the Holland America Line as a 2nd officer on 12 June 1914. 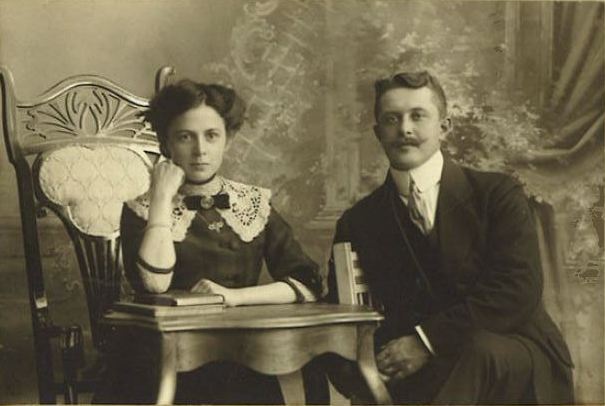 Mr. & Mrs. Reifferth. Not long after their marriage. (b)

In between he had married on 29 Oct. 1913 Trijntje Maria Oudenbroek (Born on 18 December 1888 at Zierikzee in the province of Zeeland, who was a daughter of Pieter Oudenbroek and Bastiana Johanna van Dijk) there were two children. (a)

His son Max married and there was a Grand Child Fenny van Diggele- Reifferth  who provided the family photos. Captain Reifferth had passed away before she was born but she was told that he was a very outgoing man with a great skill in handling people.

The first ship was the Oosterdijk, followed by the Soestdijk. On this ship he is already promoted to Acting Chief Officer, no doubt due to the fact that he had already 8 years sea experience before he joined the company. Plus a number of senior officers had been called up for Royal Navy Reserve duty due to the start of the First World War. This is also most likely the reason why he shows up so quickly on the passenger ships, sailing between 1916 and 1919 as Chief Officer on the flagship the ss Rotterdam. As was the company’s system, you went up the ranks from the oldest/smallest ship to the newest biggest ship and after promotion it started all over again. Not always for all ranks but it was normal procedure for Chief Officers and Captains. Thus he should have been promoted to Captain his time on the  ss Rotterdam.

The ss Soestdijk (II) built in 1900 as one of the first cargo only ships for the company. (c)

This does not happen due to the slump on the North Atlantic with the reduction in emigrant traffic and the surplus of tonnage. I assume that the company now kept him on the cargo ships so he could step in if there would be an open position available. This first opportunity arises in 1925 when he assumes command of the cargo ship ss Burgerdyk. One of a series of 10 B-class cargo ships which had joined the company as a war payment for the torpedoing of the SS Statendam (II) / Justicia. 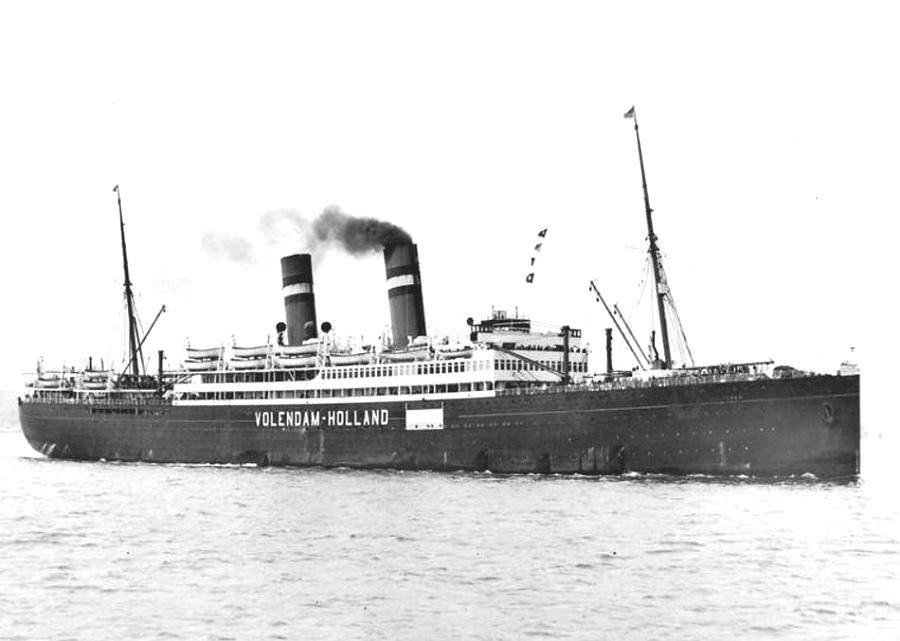 The ss Volendam (I) of 1922. This photo was taken in 1939 when World War II was already in progress  but  the Netherlands was still neutral and not involved.  (c)

In 1926 there was a bit of excitement when in March 1926 the ss Volendam (Captain J.J. de Koning) spots a schooner wallowing in heavy seas. Upon investigation it becomes clear that the schooner is in near sinking state and cannot be controlled. (Later it is found out that the crew on board had been trying to survive on the stricken vessel for 17 days). 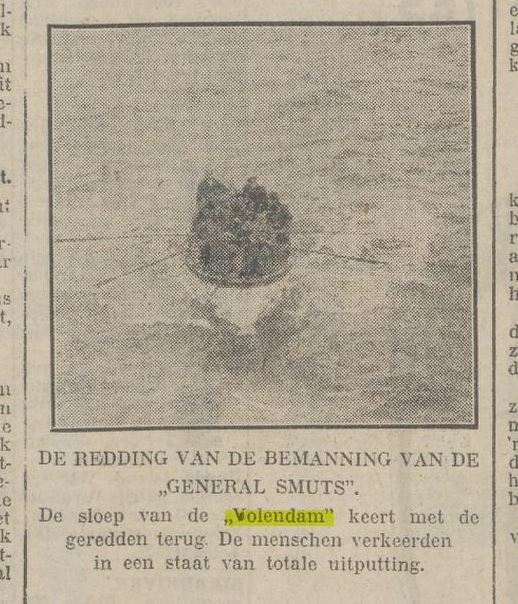 From a Dutch newspaper dated 08 March 1926. Chief Officer Reifferth can be seen at the rudder in the stern (d)

The Captain decides to lower a boat under the command of Chief Officer Reifferth which rows to the schooner “General Smuts”.

As the crew is too exhausted to jump in the sea, the lifeboat has to go alongside the moving hull and lift the crew off.

The captain and the five crew were saved. The schooner is set on fire so that it sinks and does not become a submerged danger to the shipping traffic. Chief Officer Reifferth later  receives the large silver medal from the Dutch Lifesaving Society.

Things remains complicated for the company and remains and he keeps alternating between Acting Captain and Chief Officer; which sees him in May 1927 as Chief Officer on the Nieuw Amsterdam. After this ship he serves on several of the B class ships as Captain and then in 1929 on the ss Meerkerk of the United Shipping Company (Vereenigde Nederlandsche Scheepvaart Maatschappij) which was a company founded in 1921 as a joint venture between several Dutch companies which included the HAL. 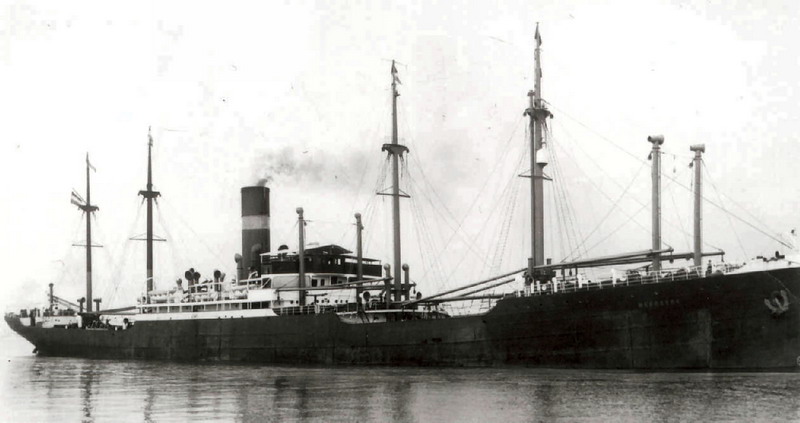 The ss Meerkerk of the VNS. This had never been a HAL ship but had been entered in to the VNS by another company.  Especially after WWII many Holland America Line cargo ships would sail in charter for the VNS. Captain sailed on this ship for a month, to fill in for the regular captain , Captain Jan Coerkamp which was also a HAL captain. on loan.

This as there was not a Dutch company which was specialized on the service between the Netherlands and South Africa. Later on they also had a service to the Far East as far as India and China. Holland America had provided ships for this company and also crew, who remained on the company’s books until 1930. 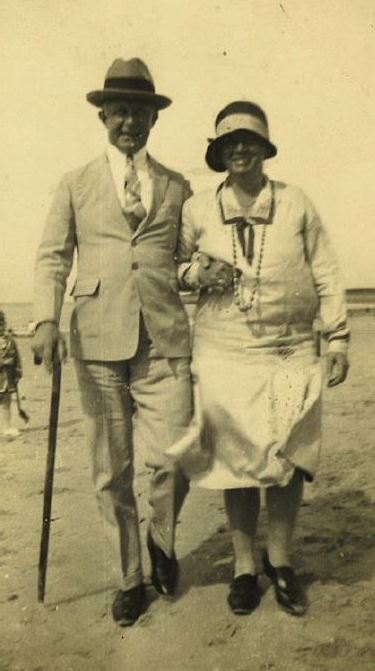 Capt. Reifferth and wife seen here at a beach outing around 1930 ? (b)

In 1930 he is assigned to the ss Boschdyk which sailed on the British India service which was a company route from New York to Singapore and Ceylon. This ship did not come to Holland and thus the crew sailed with one of the passenger ships to New York and then returned in the same way at the end of the contract which could last anytime between 9 months and a year. After such a long spell, there was normally a longer leave and then an assignment on the ships on shorter turns around services.  Captain Reifferth returns as Chief Officer on the ss Statendam and ss Veendam.

This is the end of his career with Holland America. The depression was now really biting and scores of Captains and Officers were made redundant.  There is no record of the why this also happened to Captain Reifferth. Or maybe he was not but took the opportunity to change his career.

I will try to find out more about his navy career in du course. 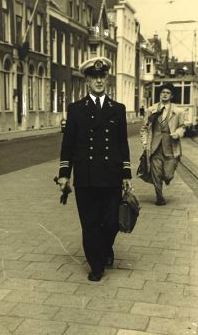 Captain Reifferth passed away on 21 April 1957 at Rotterdam at the age of 68. Last address: Mathenesserlaan 427b at Rotterdam

His wife survived him until 30 December 1981. Both were buried at the General Cemetery at Hook of Holland.

Sailing Listing from the HAL Archives:

Via Harwich ferry to Sunderland to collect ship

to New York as passenger to join the ship in New York as it was on the Dutch East Indies service.

Returns home from New York as passenger after leaving the Boschdijk there.