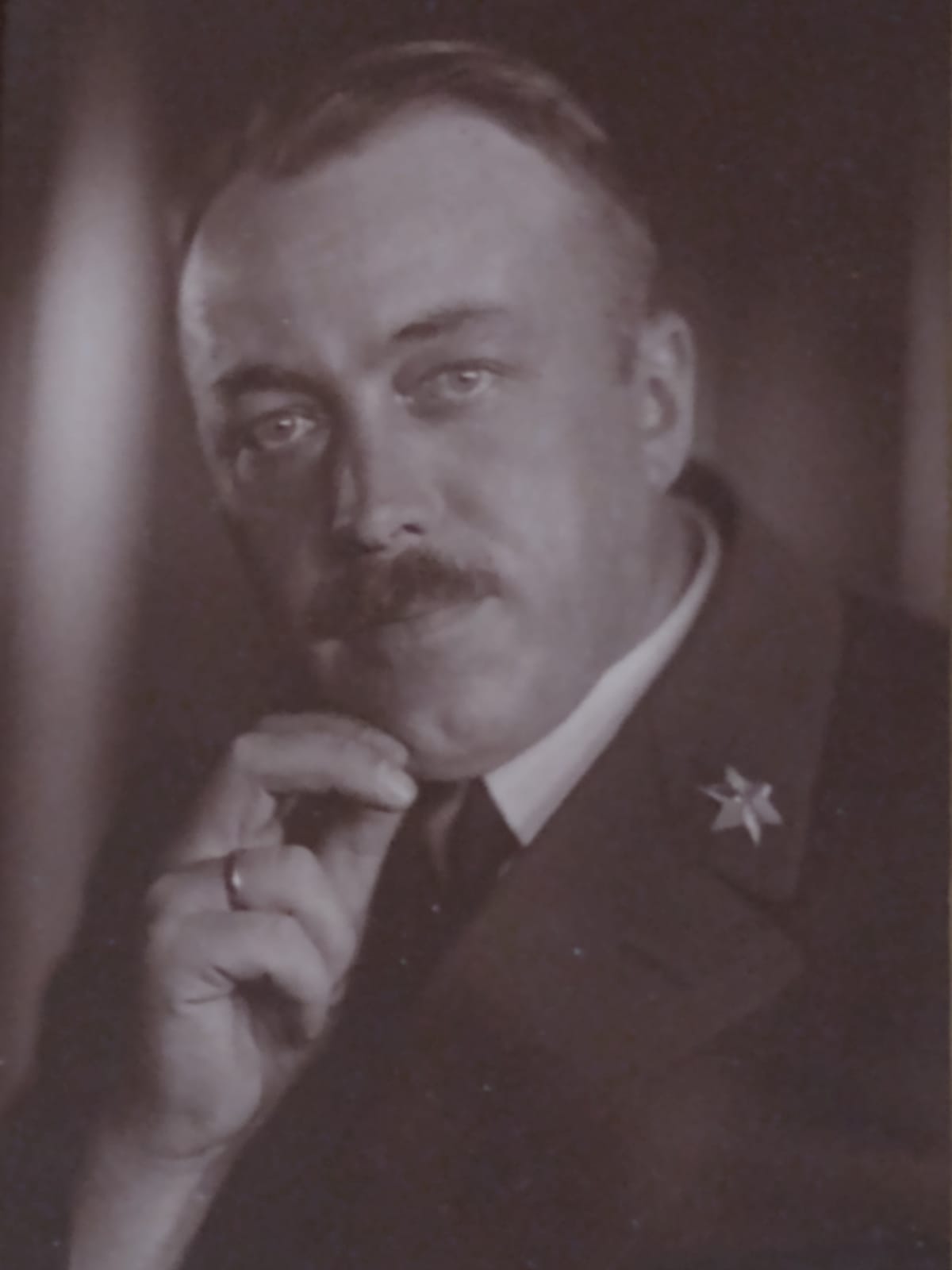 Klaas Pauw was born on 24 April 1884 in Blokzijl which was and is a small town in the Province of Overijssel in the East of the Netherlands. His father was Johannes Hendrik Pauw. Listed as a general salesman and who took over in 1885, together with his brother, the family firm. They were involved in exchange trade. E.G  Rush or Reed mats were made in the Blokzijk area and then over water transported and bartered against butter.(g)  Grandfather passed away shortly after in December 1886. The name of the mother was Berendina Oosten. (a)

Maybe he went with the transport of the Reed mats over the Zuiderzee that wetted his appetite to go to sea. Certainly there  was and is a lot of water around his home town of Blokzijl  due to the excavation of peat for fuel. The whole area was prone to flooding until the 1930’s when the Afsluitdijk, closing off the Zuider Zee, was put in place. It also had a commercial port which is now a thriving water sports location.

He joined the Kweekschool voor de Zeevaart in Amsterdam on 21 August 1899. And after the three year education he joins Holland America on 07 August 1902 and is placed on board the ss Noordam as cadet. On 12 September 1903 he returns from sea with a very good report. For unknown reasons he does not pass the exam for 3rd mate (although his school reports were good) and thus he returns to Holland America on 05 Jan. 1904 as acting fourth officer. 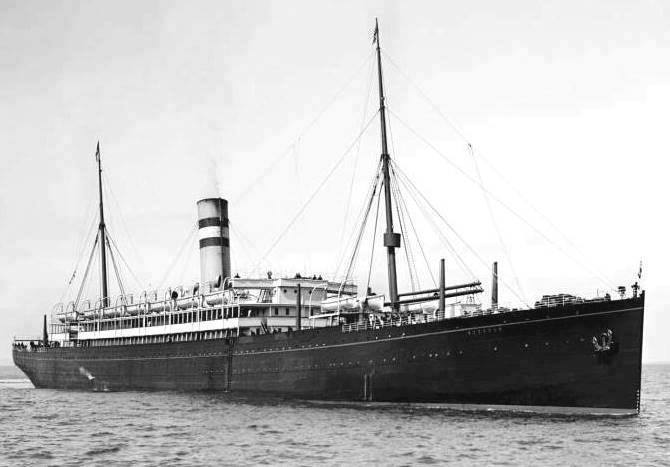 The ss Noordam (I) was the second of three sisters which financial success put the Holland Amerika Lijn on the map as one of the major players on the North Atlantic. (e)

He returns on 29 June 1904 as 4th. Officer on board the Potsdam. When looking at his sailing list it is peculiar, compared to some of his colleagues, that he remains assigned to the passenger ships on a regular basis until promoted to captain.

It seems that this has to do with his parallel career in the Royal Navy. He enrols in December 1903 into, and remains with, the Reserve Service until his untimely death. By 1925 he had reached the highest rank possible for a Merchant Navy Officer, namely that of Lieutenant First Class in the Reserve.  Holland America liked to have RNR officers in command of their Royal Mail Passenger Ships and thus he must have been given all the support needed to go for his RNR training periods.

This coincides with an entry in his sailing list when he fails his First mates (captain’s ticket) exam. It can be assumed that he did not have enough time to prepare himself with the Royal Navy moving him from (training) ship to ship. So the company did not take it very seriously that he did not pass at the first go.  Because as soon as he passes he is assigned as the Sr. Navigator to the flagship ss Rotterdam and then shortly after to First or Chief Officer.  (See the Royal Navy notes at the very end of this biography)

Now he should have spent several years as first mate /first officer on the cargo ships but again he is assigned to the passenger ships and the two senior (ss Nieuw Amsterdam (I) and ss Rotterdam (IV) ones on top of that. 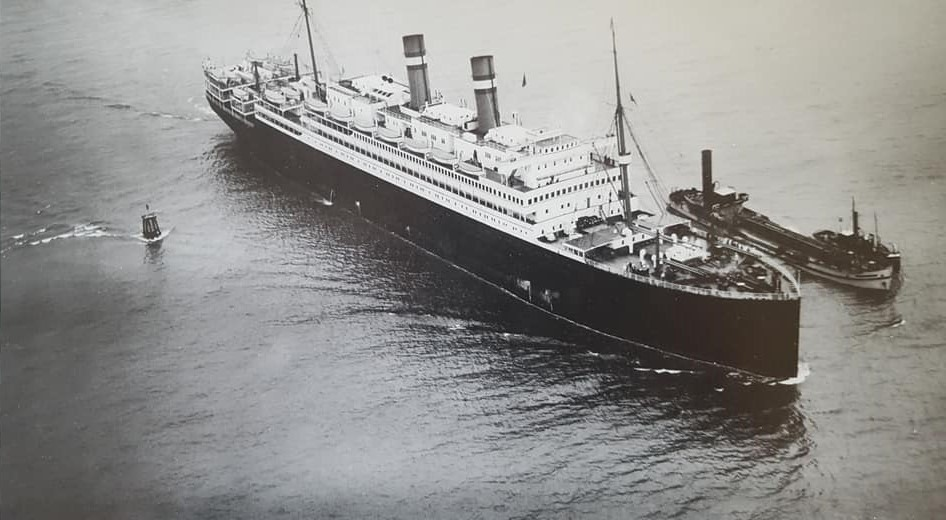 The ss Rotterdam (IV) came into service in 1908 and remained the flagship of the company until 1929 when the ss Statendam (III) arrived. (e)

Rotterdam). Her parents (Uco Mesdag and Hedwig Maria Körner) had a factory in the town of Zwolle. 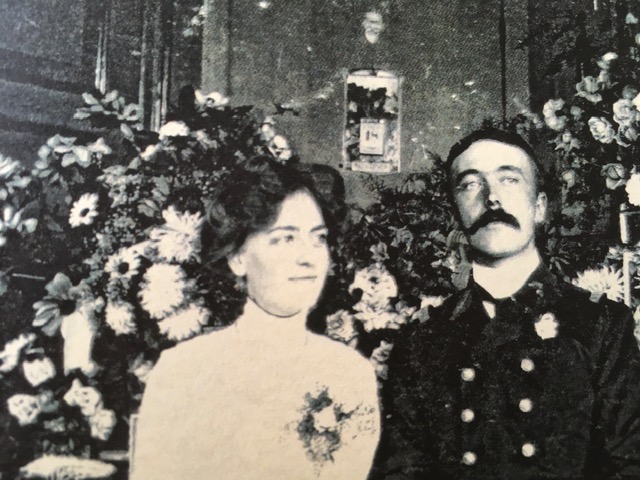 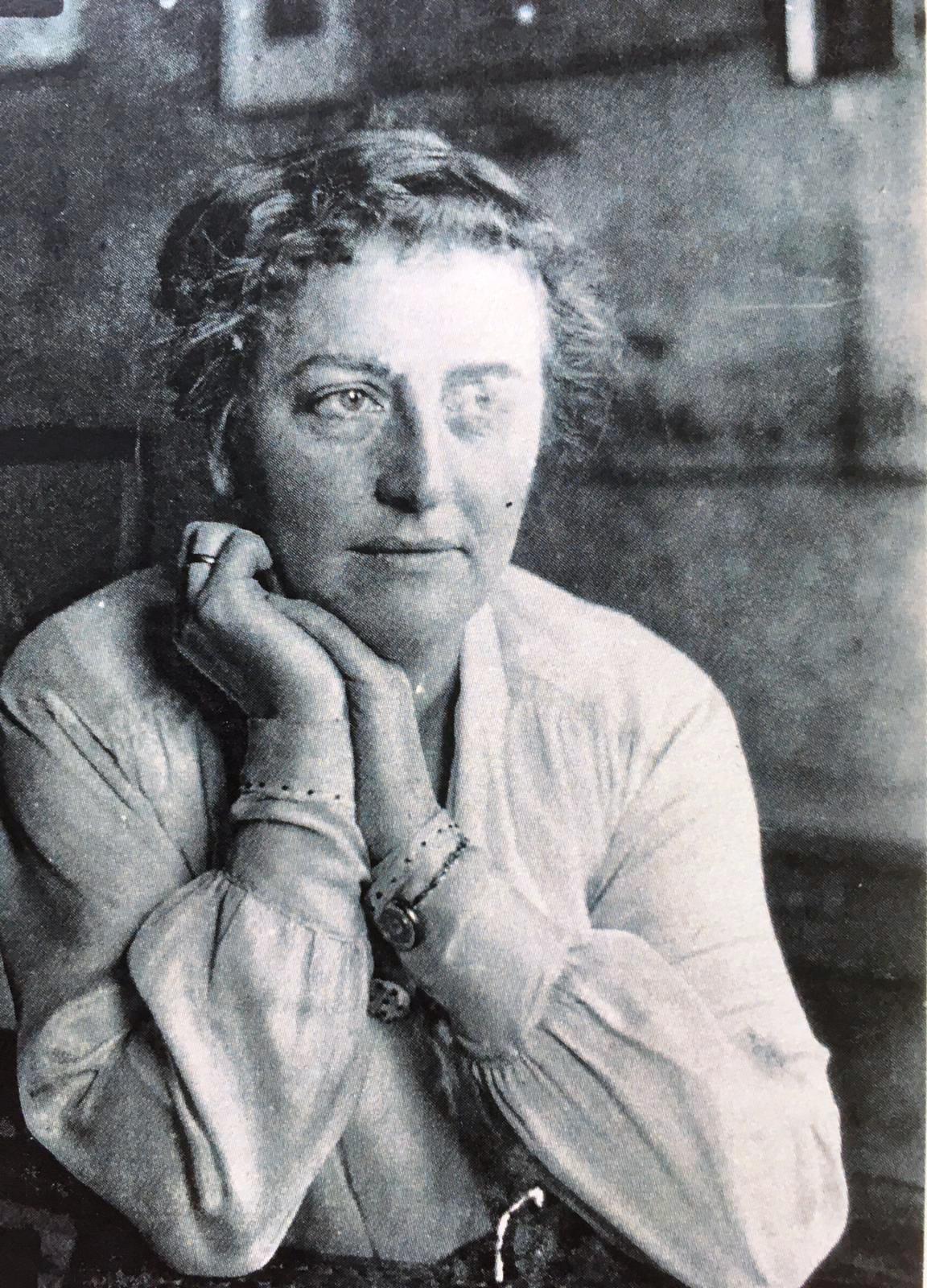 But by 1925 the Pauw family is listed as living in Rotterdam. (a)

There were three children, all daughters: 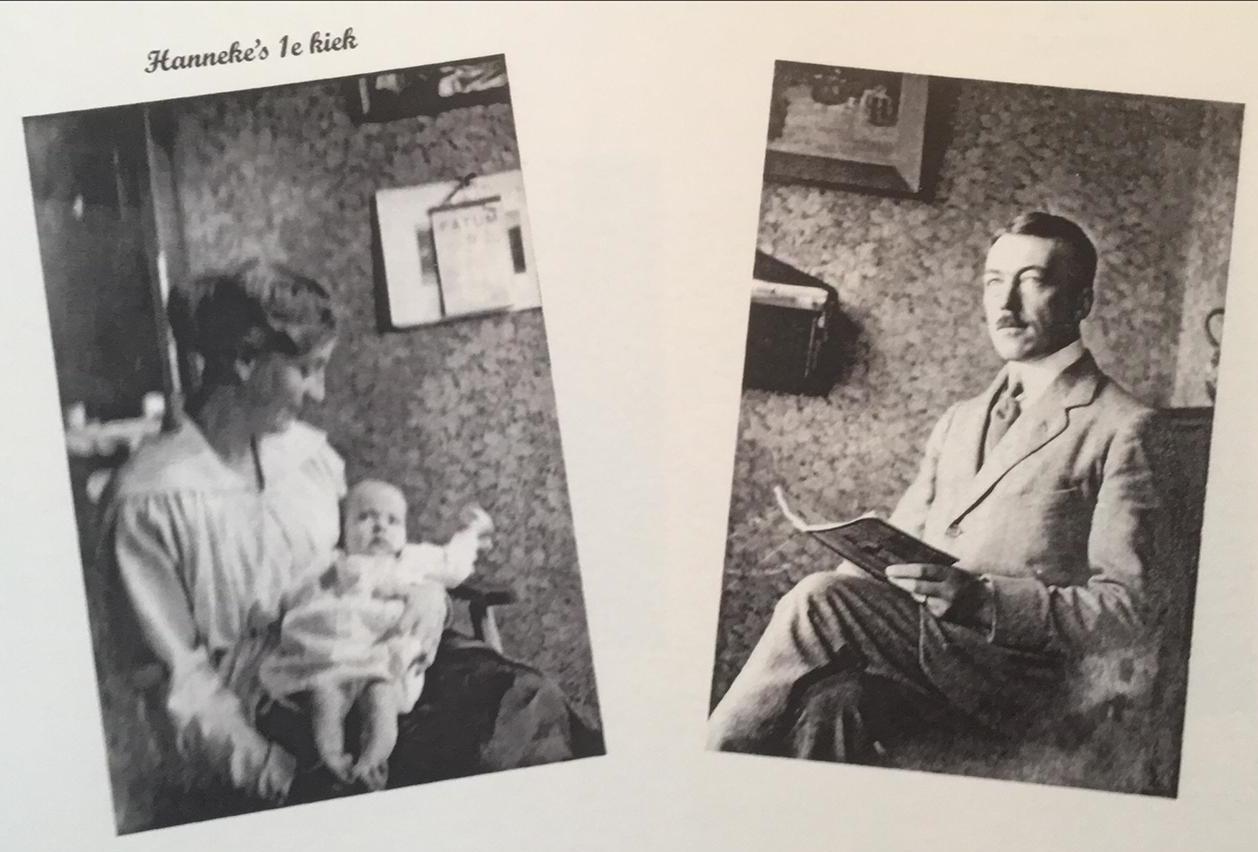 A picture out of the family album showing Mrs. and Captain Pauw and their 3rd daughter. (g)

By the end of 1914 he is promoted to Captain with his first ship being the cargo ship ss Waaldijk. This only lasts for a short while as for the next three years he remains with the Royal Navy due to the First World War, although the Netherlands was neutral during the conflict. he was assigned as commander of the Navy Pilot boat at den Helder for most of this period. 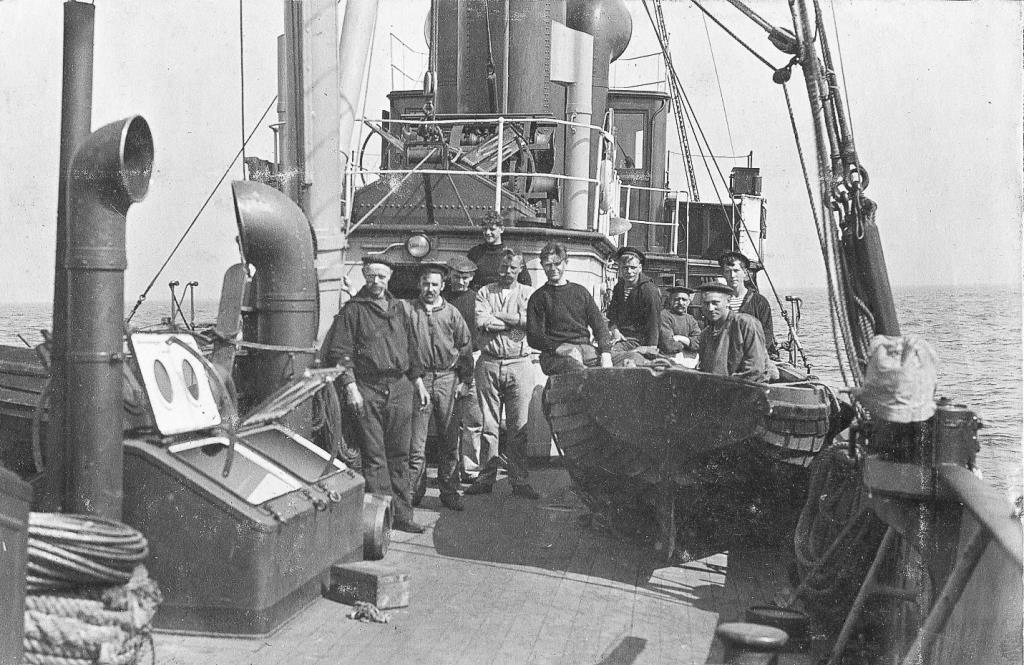 This photo made by the captain of his crew on board the pilot boat. it looks a bit like a motely crew but when navy sailors worked they were not deck out in the finery that you always see on parade. These photos are quite unusual as not every commanding officer took an interest in doing so (h)

He then returns to the cargo ships and ends up in 1922 for one very short voyage on board the ss Koudekerk. 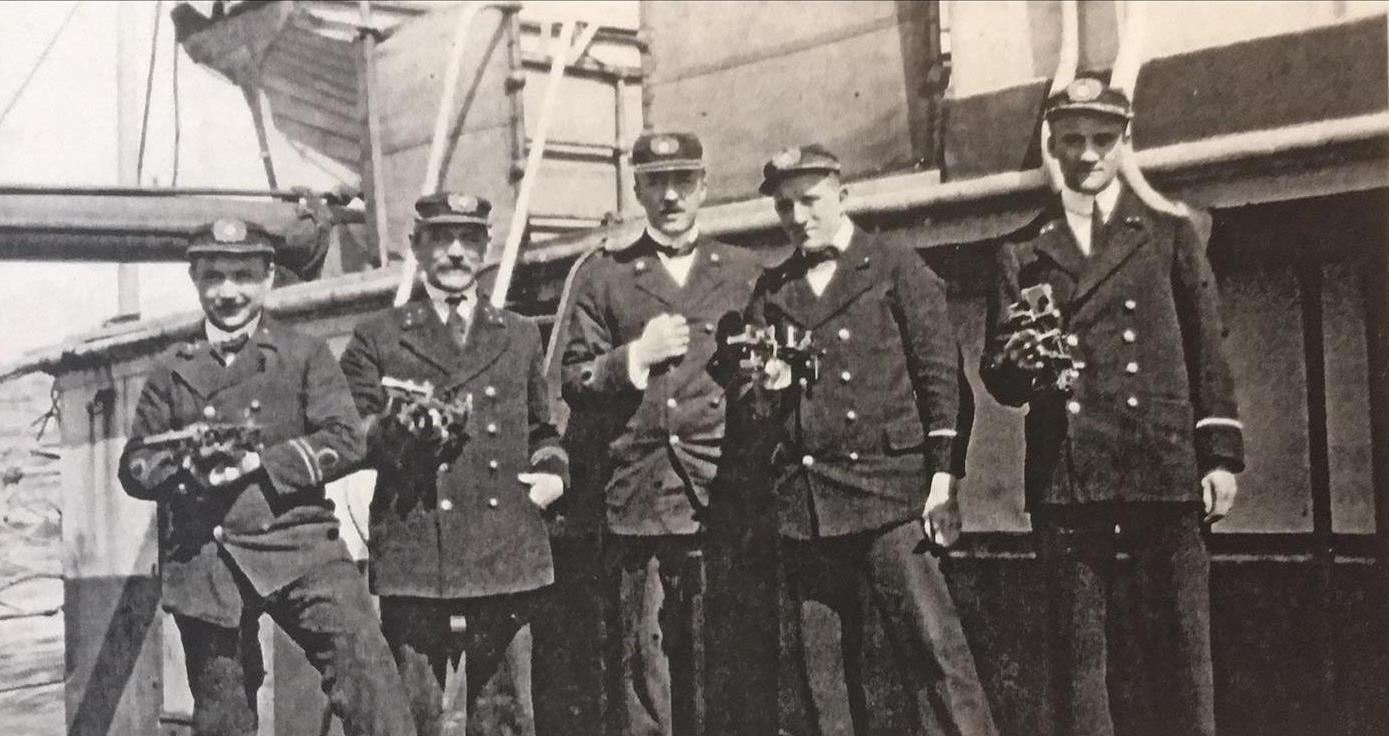 This photo was taken in March 1919 while Captain Pauw was in command of the ss Amsteldyk during voyage 12, while on the way from Rotterdam to Philadelphia. As all officers are present with their sextant it must means they were taking the sun’s noon altitude in order to find the noon position of the ship. From left to right, Second Officer, Chief Officer, Captain, 3rd Officer, 3rd Officer. (g)   ED: at a later date I will add the names of these officers when I have the chance to look at the voyage book. (g)

The ss Koudekerk was not a Holland America Line ship but belonged to the VNS or United Steam, a joint venture of several Dutch shipping companies in which the HAL participated with ships and personnel. This company had been founded in 1921 to enable services to Africa and to the Far East all the way to China on routes where there were no established Dutch companies trading yet.  The VNS had bought a ship, the ss Kirkshall Abbey, which had been sailing a few times in charter for HAL and Captain Pauw was dispatched to Hamburg to pick her up and bring her to Rotterdam via Antwerp. There Captain Siebe Vlietstra took over and Pauw was transferred to take out the brand-new ss Breedijk on its trial trip and subsequent maiden voyage to Philadelphia and back. 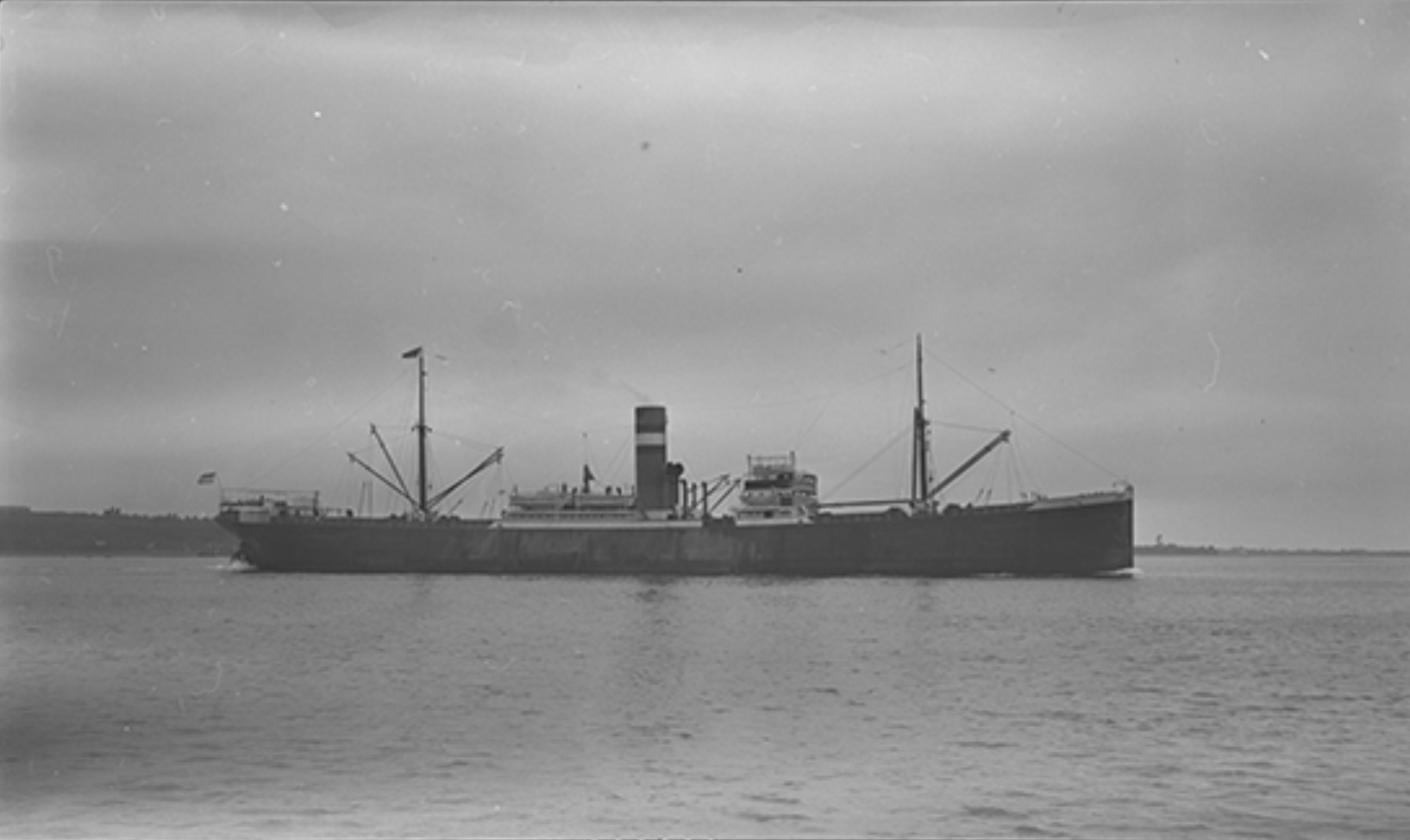 The ss Vechtdijk. This ship had not been ordered by the company but had been bought in 1920 while under construction in England. Upon delivery it was assigned to be  chartered by the VNS.  It remained in this charter, but owned by HAL until 1933 when it was sold. (e)

After another spell with the Royal Navy he is sent away for “the long run”. This was the service to the Dutch East Indies the so called Holland Britisch Indisch Service from New York.  Which was operated under the VNS banner. For relieve the company had come up with a clever idea, namely sending new crew over while working on a ship on the short North Atlantic service, transfer that crew in New York, and then this relief crew sailed the ship back to Rotterdam and then went on leave. For captains this was not always done this way  and as the B class ships had a few extra cabins, Captain Pauw sailed as passenger to New York and took command of the ss Vechtdijk on 21 September 1923 in New York. 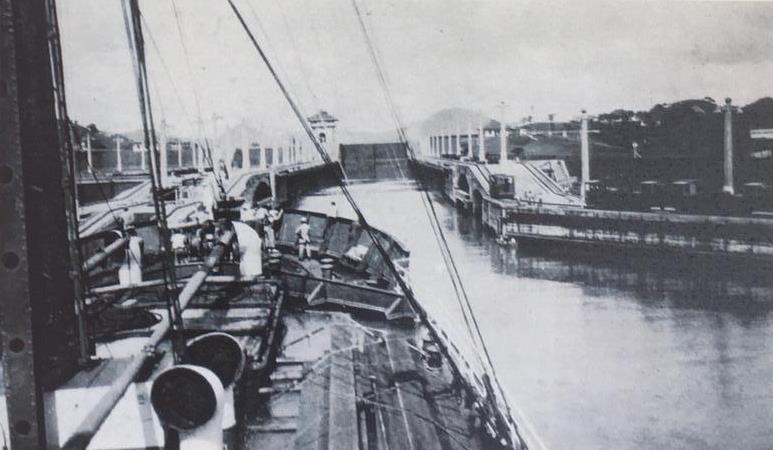 The ss Vechtdijk. This ship was on the “long run” and sailed to the West coast and the Far East. Here a rather unique photo taken from the bridge of the Vechtdijk while she is approaching one of the locks. (ED: I think this  is the Pedro Miguel Lock, looking at the hills in the background) (g)

He makes 3 round voyages from New York going as far east as Colombo on Ceylon (Now Sri Lanka) and by 10 Oct. 1924 he is back home again.   In  his photo albums kept by his grand daughter there are a lot of photos of life on board. This is for an historian of great interest as life on the early cargo ships is not very well documented. The focus of the company was on the glamour of the passenger ships and often the cargo ships were constructed in a very spartan way where the was little emphasis on luxury or well being of the officers and crew. Thus the ships complement had to be resourceful and they where. On the passenger ships the pools were exclusively for the passengers with no crew allowed, on the cargo ships they could built whatever they wanted as long as it fitted and could be removed before reaching the next port. 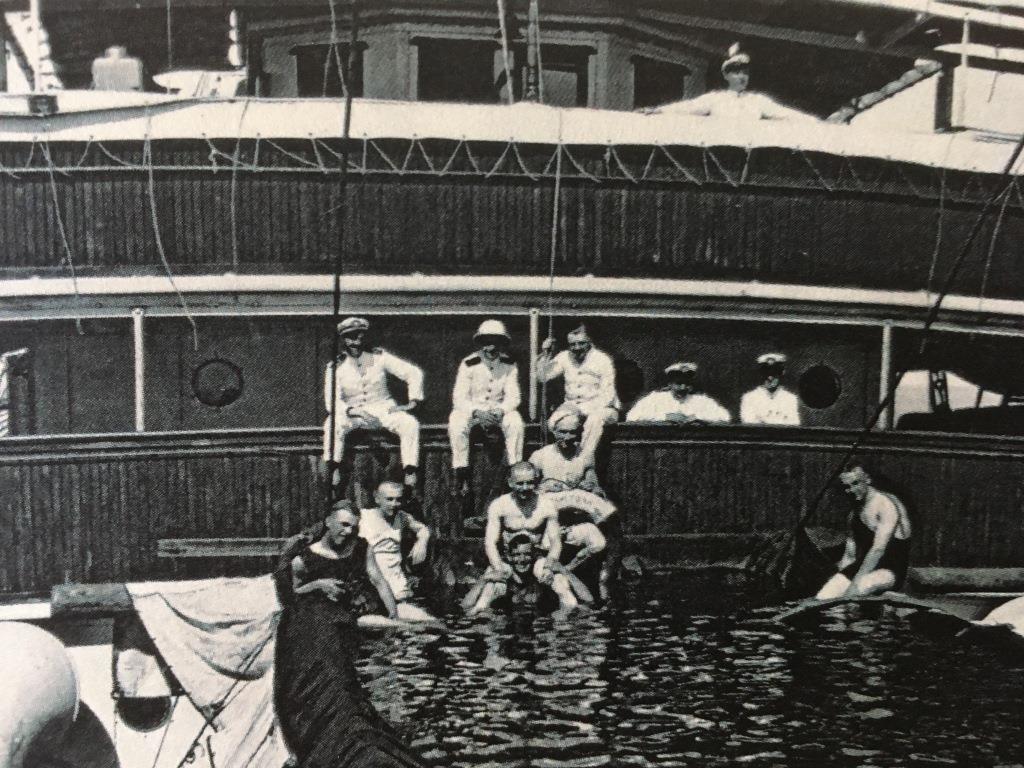 Here we have one such pool construction on the ss  Vechtdijk, during one of her voyages to the Far East which included long oceans crossings in warm tropic weather. So in front of the bridge a pool was constructed to bring some relieve from the opppressive heat as the ships did not have any A.C whatsoever.  Note the top deck is the bridge, with the officer on look out. Below is the officers promenade and then the pool. Captain Pauw can be seen sitting without a cap next to the officer with the tropical helmet. (g)

After “the long service” the captains where then assigned on the ships which did the shorter voyages to the East Coast of the USA and thus he is assigned to the ss Grootendijk a cargo ship built in Holland in 1923. This ship makes one month voyages between Rotterdam and New York with about 10 days in between while the ship is turned around in Rotterdam. 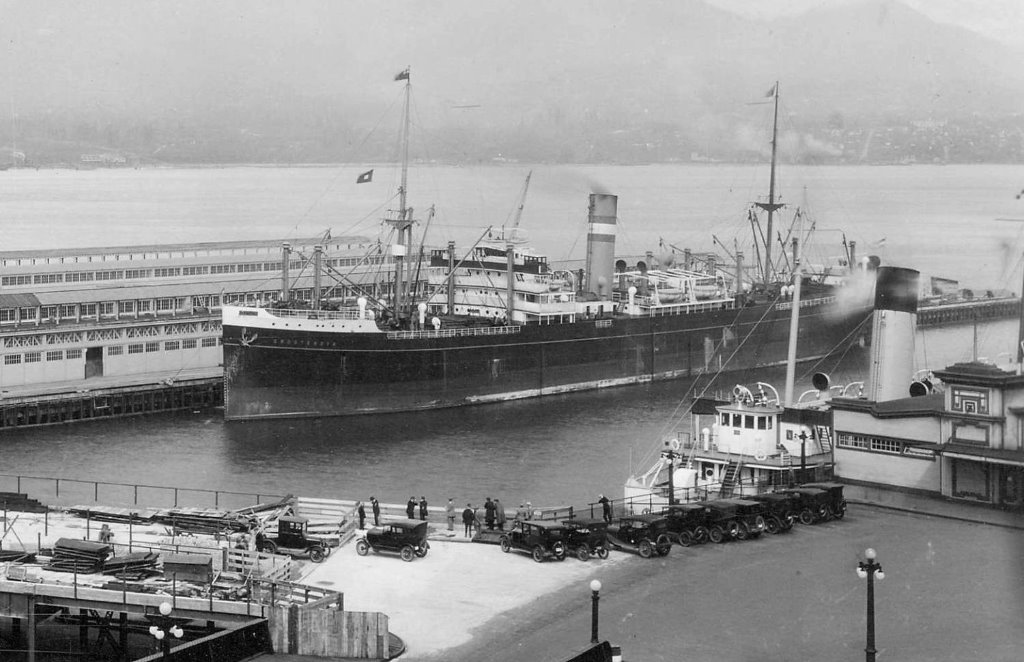 The ss Grootendijk (I) from 1923 to autumn 1925 she was assigned to the New York service but was later transferred  to the Rotterdam – Vancouver service.  She is seen here on  16 Sep. 1926 docked at the Canadian Pacific Terminal in Vancouver, then under construction. On this location is now the Pan Pacific Cruise Terminal. (Photo courtesy Mr.  H.A Price ??)

On the return of the 4th. Voyage a tragedy occurs as he suddenly passes away on 09 May 1925 due to an unknown cause.  Family information has revealed that he passed away due to a lingering kidney problem, for which in those days no medication was available. He was aware of this  and made as many sailing days as possible to ensure that his wife and children would have as much money available was possible. This was before the days of Social Security.  (g) The ship was coming from New Orleans and was just passing Folkestone. Cause of death unknown. The Chief Officer sails the ship home and it arrives in Rotterdam the same day. He was buried on 12 May at the General Cemetery “Crooswijk”,  in Rotterdam

There seem to have been several brothers and or sisters of the Captain who were noted on the death notification of 1925, J . Pauw,  J.M. Pauw, A. Pauw – Noordhof, and J. Pauw  & Children from Kota Radja Dutch East Indies.

Note (in the HR records) : this failure to pass should absolutely not have any negative consequences for this person.

01 Aug. 1914       Due to mobilization of the Dutch forces temporary dismissed to go to the Dutch Royal Navy.

ED: the Boschdijk was only delivered in October, hence he was re-assigned to the ss Breedijk 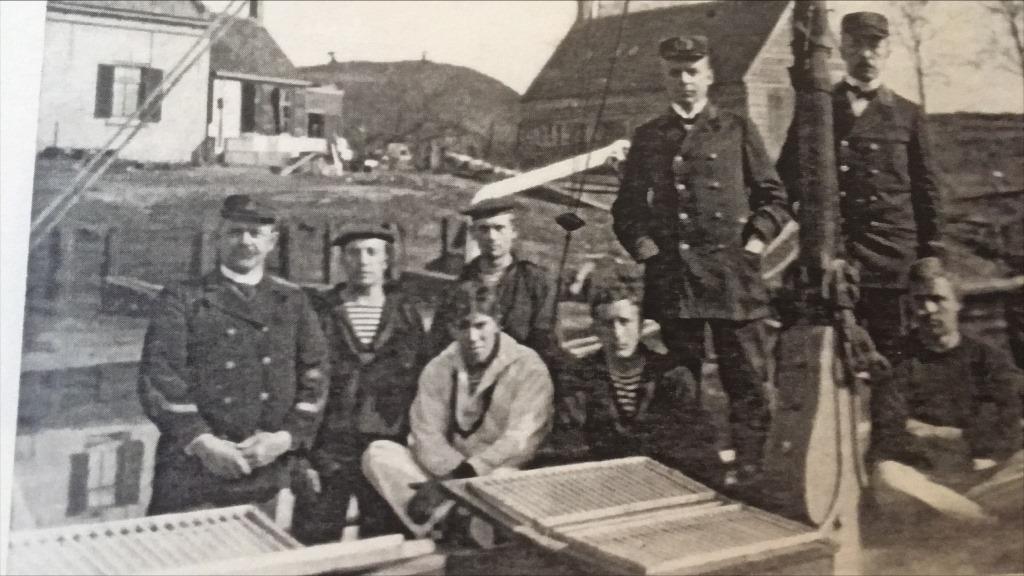 Captain Pauw during his Royal Navy Reserve time. We can see one stripe on his uniform which indicates the photo was taken after 1912. Experts have not yet figured out what sort of boat he is pictured on. (g) 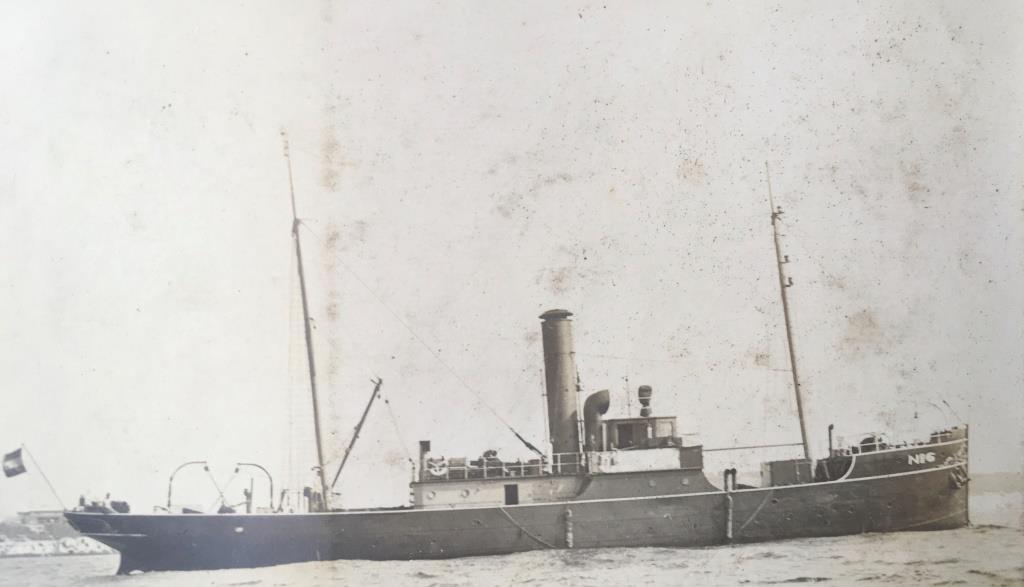 It is assumed (subject to verification) that the Navy pulled their regular Commissioned Officers  off all the auxiliary ships so they were available for war patrols. These functions where then taken over by the Reserve Officer/ 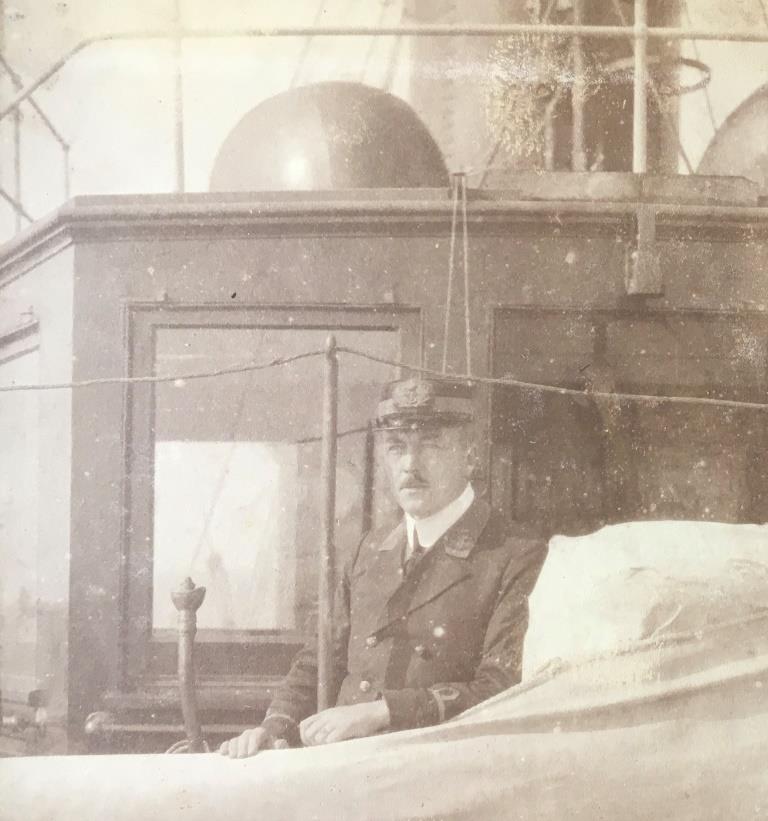 Captain Pauw on the Bridge of “:Loods boot No. 6.” On service around the port of Den Helder which is the National Navy base of the Netherlands. The pipe on the left is a communication pipe for orders down to the engine room. The little bulb on the the top is the whistle which was blown first to get attention.(g)

1920 Jun. 14 Allowed to fly the Dutch Royal Navy Reserve flag on board the merchant ship he will command as long as he is in service of the Holland America Line.