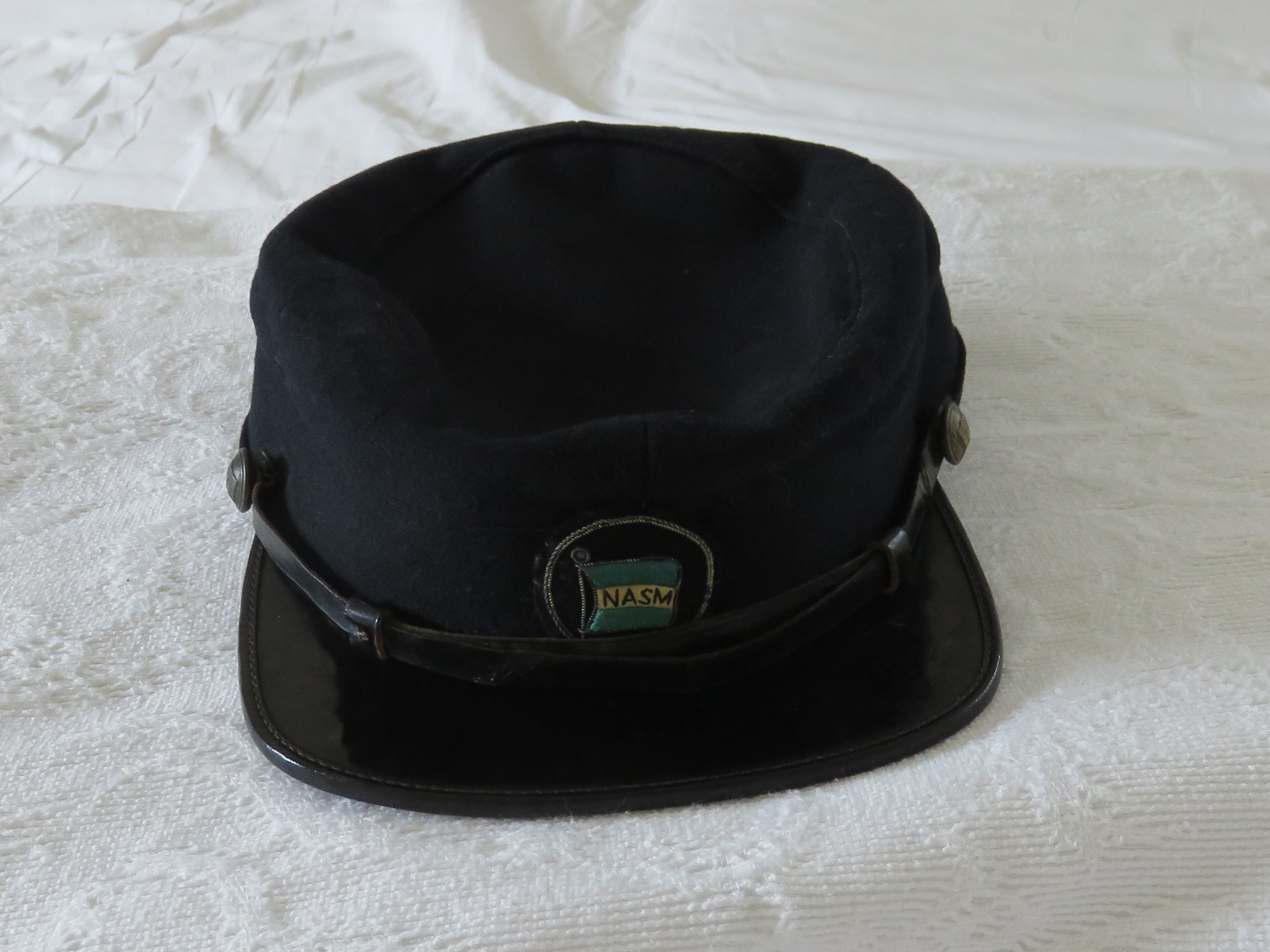 This one of the best known Captains from the early days, mainly because there is a painting with his name on it.  As a result he is sometimes even identified as being the first captain of the company. There were several before him. But he did join the company right in the beginning and was assigned as  3rd Officer to the new building of the ss Rotterdam (I) then under command of Captain Hus which was the FIRST captain of the company. Six years later he would be in command of the same ss Rotterdam (I) when the fleet was expanding.

Born: Rotterdam on 31 December 1847 as son of Johannes Lucas and Diderika Groenevelt (c)

Languages: English and German (a)

There is nothing known about his time before joining the company. He was 25 at that time and thus must have sailed somewhere else. Either in sail or in steam.  No records found as of yet.

He married on 27 July 1876 at Rotterdam with Johanna Maria Nell (24) born on 14 Oct. 1851 at Rotterdam. Daughter of Jan Hendrik Nell and Catharina Francina Seback. There were four childeren. 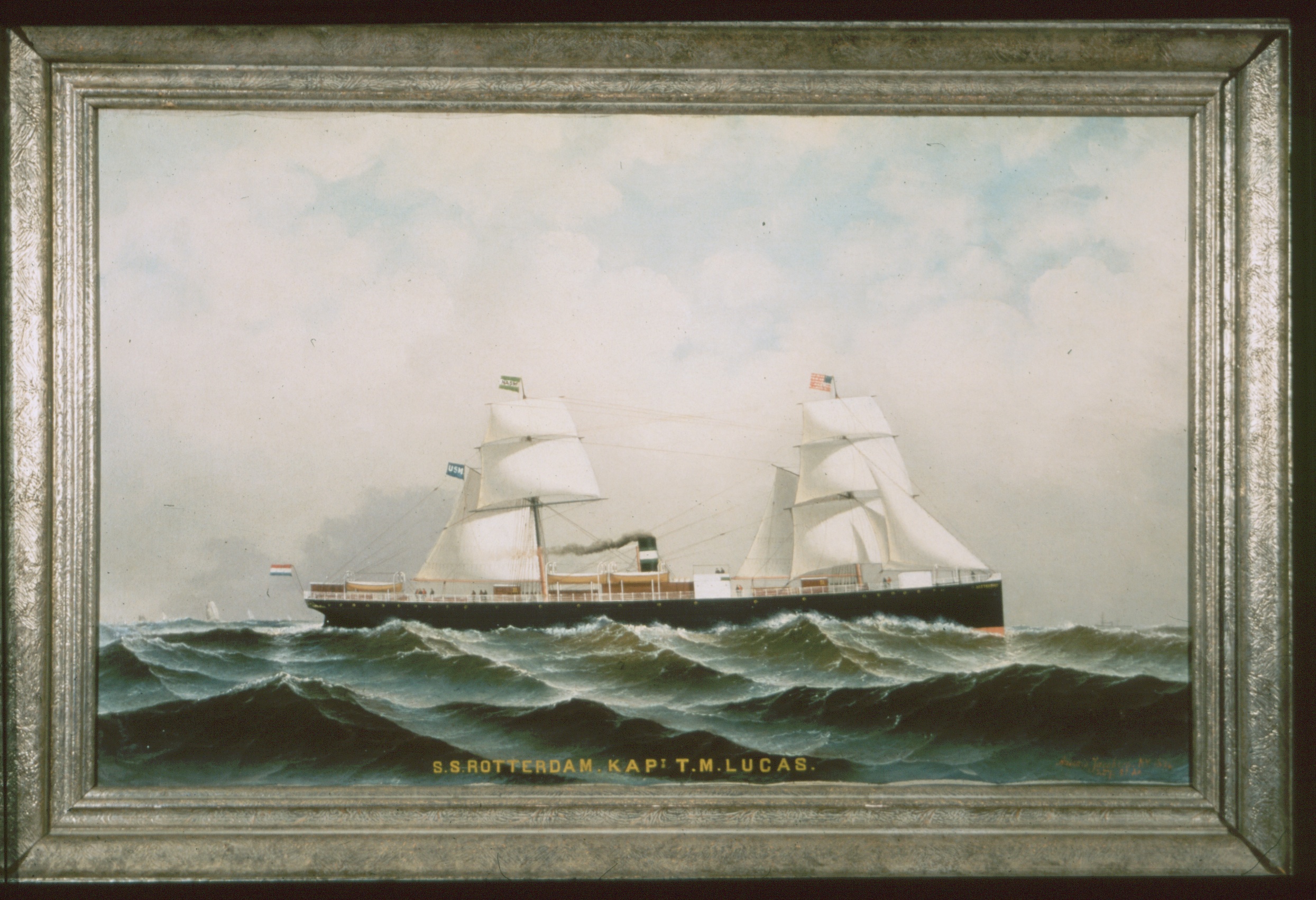 A so-called Captains Painting. Many Captains had such a painting commissioned as Photography only came later. This one is by Mr. Jacobson of New York  who produced these sort of paintings  as if it was factory work. I believe this original is in the collection of the Maritime Museum Rotterdam. (Photo Courtesy of Holland America Line)

He sailed for the company until 1884, when while in command of the ss Amsterdam (I), the ship stranded at Sable Island on 30 July. 264 (*) Passengers and crew were on board and it was decided to go into the lifeboats. During the process of landing the boats on Sable Island two passengers and one crew member (a fireman) lost their lives as the boat overturned in the surf. The crossing had brought a mixed bag of weather but during the evening of the 30th.  around 20.00 hrs. thick fog set in. As Lucas thought that he was about 35 NM. South of the island he kept the ship going at full speed and thus the ship ran ashore at full speed at 21.45 hrs. Because of this full speed the ship ended up high on the shore and had to be given up. (d) 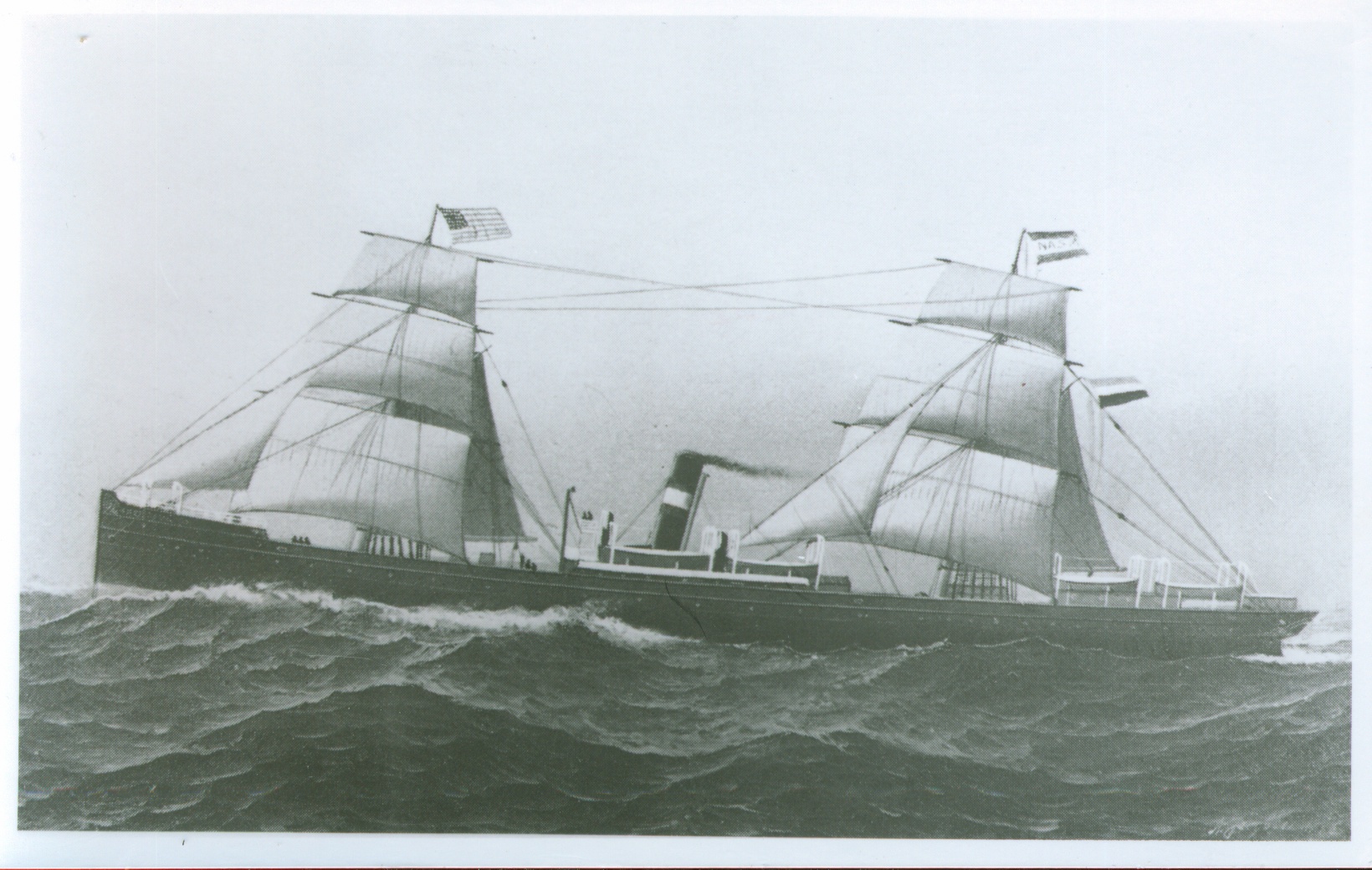 The ss Amsterdam (I) joined the fleet in 1879 and was the 6th. ship owned by the company. (Own Collection but the original painting is also a Jacobson.)

(ED) I have no information yet what the company thought of this as losing ships in those days due to fog, storm, ice bergs,and lack of clear skies (for celestial navigation) was not usual, but I question the wisdom of the decision to keep up full speed while in the Fog.  Regardless of where you think that the ship was. But this was not an unusual practice in those days and there were no rules against it as “prudent seamanship” was bot clearly defined.

It is noted in the company administration that he was dismissed from the company on 27 September 1884. In this case the word “dismissed” does not give an indication either of the why as the personnel clerks used this word for every employee when their voyage ended and they went on leave.

On 3 March 1885 Capt. Lucas joined the Stoomvaart Maatschappij Zeeland (SMZ) a Dutch ferry company which operated (and still does, although it has now been absorbed by the Stena Line and only sails from Hook of Holland) from Vlissingen to Harwich in England.

His starting wage was an Fl.1000, — a year. Note: Holland America Line Captains were paid by the voyage, ferry captains by the year as they had a much more regular schedule. Thus the wages were similar but a ferry promised more time at home. So if Captain Lucas had left Holland America at his own decision then this was a good reason to switch sailing areas. It gave much more of a chance of a regular family life. 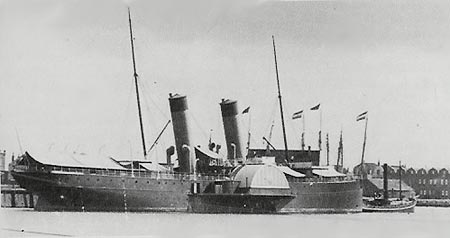 One of the ferries on which he was captain. This is the Willem Prins van Oranje. Until the service was taken over by Stena Lines all the ships were named after the Dutch Royal Family. (Uncredited Picture Postcard)

Part of being able to work on the ferries is the need to have a pilot exemption certificate for which you have to make a large number of entries and exits both in the ports of Vlissingen as well as in Harwich. Thus it can be assumed that in the gap period between leaving HAL and joining SMZ, he qualified for both areas. After 2 years as First Mate he is promoted to Captain on 01 June 1887 with a salary increase to Fl. 3000, – (Or Fl. 250, — a month)

On 24 April 1894, his new home town becomes Middelburg which is much closer to Vlissingen for his work. (By 1909 it is noted that he was living in Vlissingen itself)

In 1894 the Royal Dutch Navy created the Royal Navy Reserve program.  He must have joined that same year and is promoted on 01 Jan. 1895 to Lieutenant Commander. Unknown is as of yet how long he stayed with the Royal Navy.  He received a medal in 1910. (f)

In 1906 he goes shore side and becomes Inspector External Affairs for the company. Which most likely entailed visiting the ships and dealing with the operational side. On 1 January 1907 salary increased to fl. 3800,–

Once ashore he becomes a pillar of the local community with being a member of the commission for supervising the transport of emigrants (1906) at Vlissingen. (He remains in this function until November 1916. Although Vlissingen was not directly a emigrant departure port such as Rotterdam, emigrants left from here to travel to England and emigrate from there but also Emigrant Ships came in “by the voyage” if an agent had a larger number of emigrants waiting and it made a call worthwhile. That “waiting” could cause a problem whereby emigrants ended up paying a lot of money for very substandard accommodation. The Emigrant Commission had as task to inspect the accommodation of the ships and the shore side hotels. If either was substandard than the ship could be banned from the port and the Hotel could see its operating license revoked.

In July/Aug. 1907 there is a newspaper announcement that he has been re-appointed as member of the commission for supervising Secondary Education in the town, by unanimous vote. 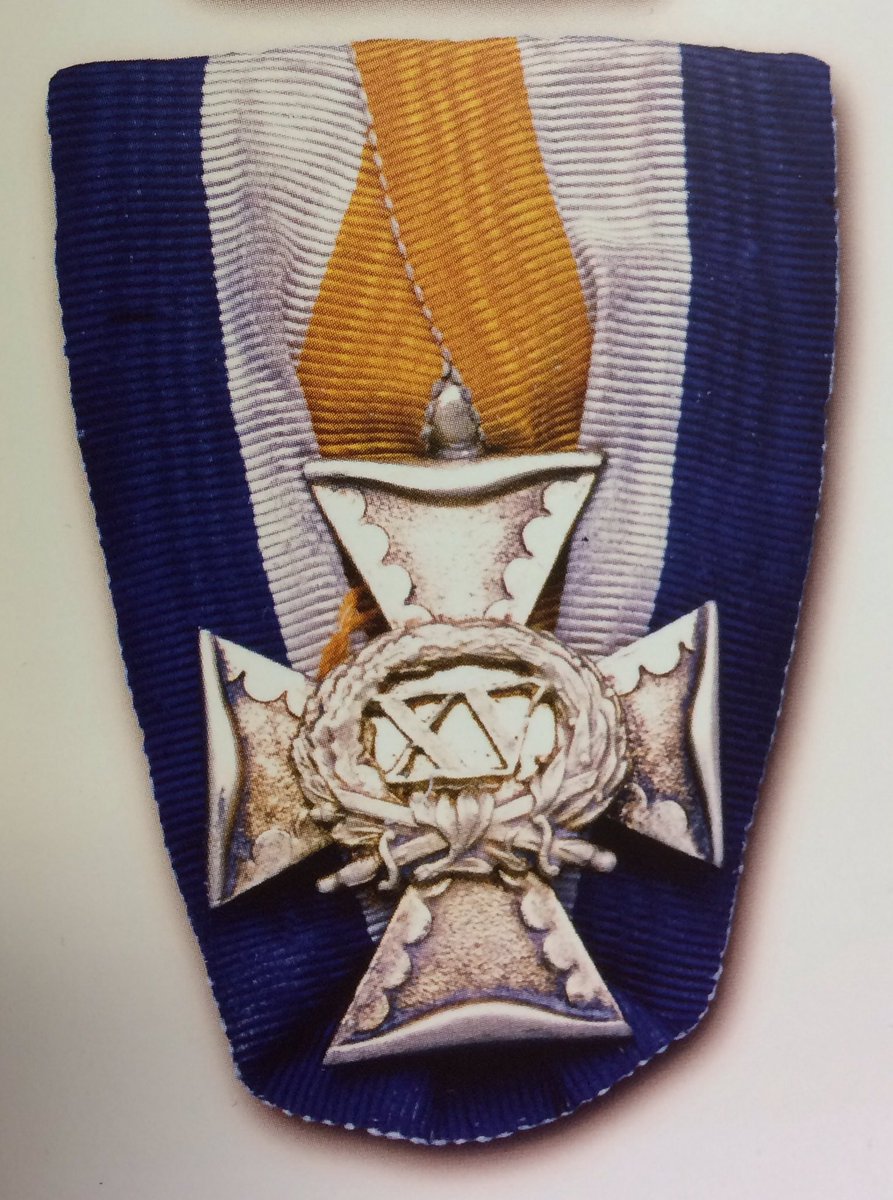 (I have not been able to find out why he received the first and the last medal but until verification I believe they were given for his work on the emigrant side.) (e)