Captain Everhardus Martinus Chevalier was born on 02 October 1836 in the town of Dordrecht. This is a town located to the East of Rotterdam but due to its connection with the open sea had a considerable port and sailing fleet. Accompanied by shipbuilding yards and other industries supporting the trade. Quite a few ships of this fleet sailed on regular voyages to the Dutch East Indies.  And far as we have been able to trace, he spent his time on these ships before joining HAL, while going through the ranks and attaining command.

His father was Everhardus Martinus Chevalier, (born 17 Oct. 1810 in Dordrecht) and was also a merchant navy captain. His mother  Catharina Juriana Gips and there were 5 Childeren of which our captain was the oldest .  The Gips family was a locally prominent family and there was a shipyard operated by one of the Gips families. One of the descendants of one of those shipyard operators became later Director of the Holland America. Later there was a second son, Everhardus Martinus Cornelis on 19 May 1839. He also went to sea and became Captain with the KPM. (This was a company who specialized in running the Inter Island network in the Dutch East Indies).

Everhardus Martinus grew up in Dordrecht and his family remained there at least until 1879.  Thus during the years he was at sea.

Because of his unusual “French(*)” last name he and his family were not so difficult to trace and a note was found that on 22 December 1886 he was accepted (membership number 498) as a member of the Free Mason Chapter of Dordrecht. Freemasons were in Calvinistic Holland not that prevalent but among sailors it was not uncommon (See the history of Captain Slierendregt who was buried by his fellow brethren in New York when he passed away on board)

(*)Note: the family tree gave as oldest known person a Jan Carlier and a Jacobus Schijvelier of 1656. His son (by 1690) then holds as last name Chevalier.

On 14 March 1867 the joins the local “Seamans college” of Dordrecht called “Tot Nut van Handel en Zeevaart” (To the benefit of Trade and Seafaring) and is given pennant number 44. Captains were allowed to fly these pennants from the Ships mast so fellow seafarers could see who was in command when their ships would pass each other.  He remains a member of the college until his death on 08 September 1903.

Here he was a full member and as the college was also a mutual insurance company, he paid in money that would later benefit his family. Thus we can find an entry on 01 September 1903 that  300,– in Dutch Florins had been paid out to his widow when he died.

On 30 Nov. 1876 he married Teuntje van der Hoeven, (Born on 13 Feb. 1851, passed away in The Hague on 25 June 1929) There was a  son, who received exactly the same name as his grandfather and his father and was born on 07 Feb. 1879. As was not unusual in a sailor’s family, the father was at sea and the registration at the local council offices was made by the attending doctor.

This son also went to sea and was noted as a Navigation Officer of “a Steamship company” when he married on 08 February 1909 at Flushing Hendrika Lijntje van den Heuvel (born Koudekerke on 14 Oct.1888) He did not sail for Holland America.

There is a notification in 1882 of the birth of a daughter Christina Cornelia Johanna. But as there is no further information this might have been a Still Birth which was not unusual in those days. (c)

Captain Chevalier also had another daughter, Catharina Juriana, who was born on 02 March 1890 and later married a gentleman who was a shipbuilding engineer. Thus the whole family was deeply connected with ships. This daughter passed away on 27 Dec. 1974 in the town of Doorn. The direct and indirect descendants have remained involved  in Shipping Mechanics and Engineering until this day (f)

Everhardus Chevalier shows up for the first time in the mustering books in 1851. The town of Dordrecht has nearly complete records of all who sailed from this town in the mid19th. Century.  On 04 April Chevalier mustered as “jongen” = deck boy, or sailor O.S  for a monthly wage of 4 Dutch Florins on the frigate “Bernard Hertog van Saksen Weimar” with Captain Pieter Hendrik Hazewinkel (from Veendam) in command for a voyage to Batavia, Dutch East Indies from Dordrecht. (One of the descendants of this captain would later be Captain J.A Hazewinkel of the Holland America Line. See his bio on this website) A round voyage to Batavia would normally last a year but could take much longer.

The next entry in the registers is from 29 November 1855 when he signs on as a 3rd mate (wage Dutch Florins 24,–) on the Dutch frigate “Bato” with Captain W.F.Broeksmit in command. Again for a voyage to Batavia.

Next voyage starts on 06 September 1858 as 2nd mate (wage Dutch Florins 40,–) on the barque “Cornelis Gips”, with Captain Marinus van Rijn van Alkemade  in command for a voyage to Australia, Java and London.

Promotion continued and on 15 June 1863 he musters as first mate on the sailing ship “Kosmopoliet I” with Captain Jan Koning in command. He remained with this ship for two more voyages; again going to the Far East from the town of Dordrecht.

Then promotion to Captain follows and on 16 March 1867 he is given command of the barque “J.C.Schotel”. A year later he departs for a second voyage with this ship with on board 25 Dutch infantry soldiers which were complemented with 80 African recruits when the ship calls at George d’Elmina. That voyage lasts 163 days as the ship arrives at Batavia on 07 January 1869. The return voyage is much faster as by April his next voyage starts from Dordrecht.

On April 10, 1869 he is assigned as Captain to the barque “Kosmopoliet II” again sailing to Java in the Dutch East Indies. Here the outbound voyage only lasts 86 days and on board are 2 officers, 6 petty officers, and 125 soldiers of the Dutch Government. (These soldiers were normally indentured on for a period of 5 years and would thus not return to Holland until 1874, if at all) Also on board 37 civilian passengers. 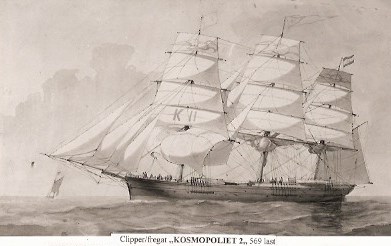 The Kosmopoliet II. This painting was made when Captain Chevalier was in command. (Unknown source on the internet)

Upon return home after another voyage he is assigned to the newbuilding  of the new barque “Kosmopoliet III” (1348 tons and the largest ship ever built at Dordrecht until then). Upon completion of the ship he is given command on 22 July 1871 and takes the ship on the first voyage to the Dutch East Indies.  The voyage outbound lasts 79 days. The Kosmopoliet III was such a large ship that it could not sail from its home port Dordrecht but had as turn over port, the port of  Rotterdam and it is from there that the ship departs.  On board also Chief Officer or First Mate S.J Krijt who would later join Holland America (see his biography on the website) (b) 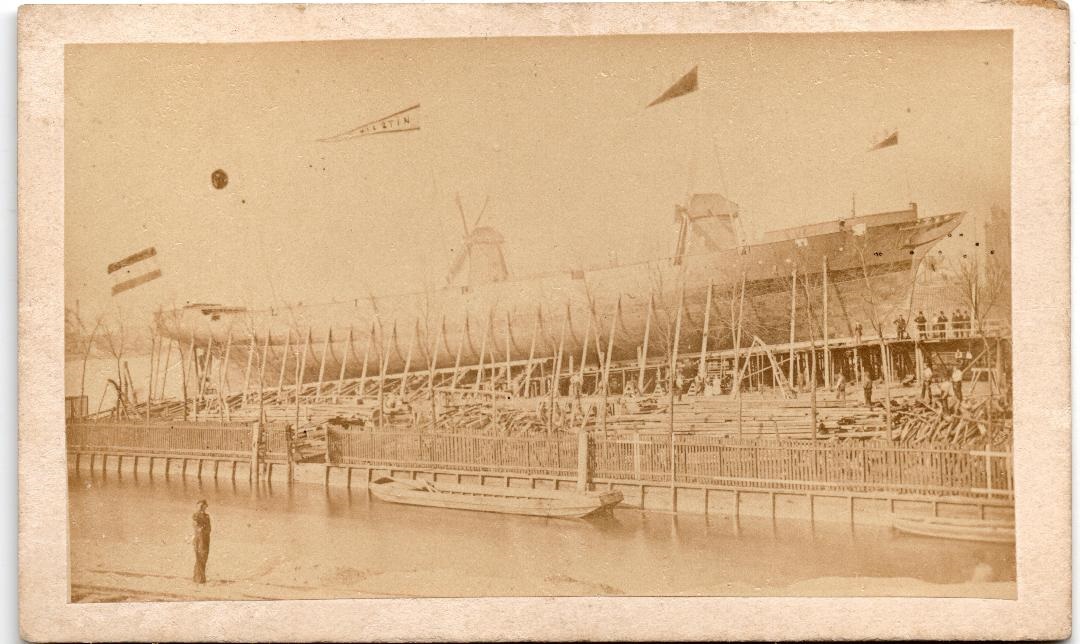 The new ship Kosmopoliet III. Seen here just before it being launched. Captain Chevalier was assigned to supervise the construction. (f)

Upon return, he joins the Holland America Line and is assigned to the ss Maas in March 1873 as Chief Officer. On 22 March 1874 he is given command of the ship when due to the fleet expansion Captain Deddes moves to the ss P. Caland. 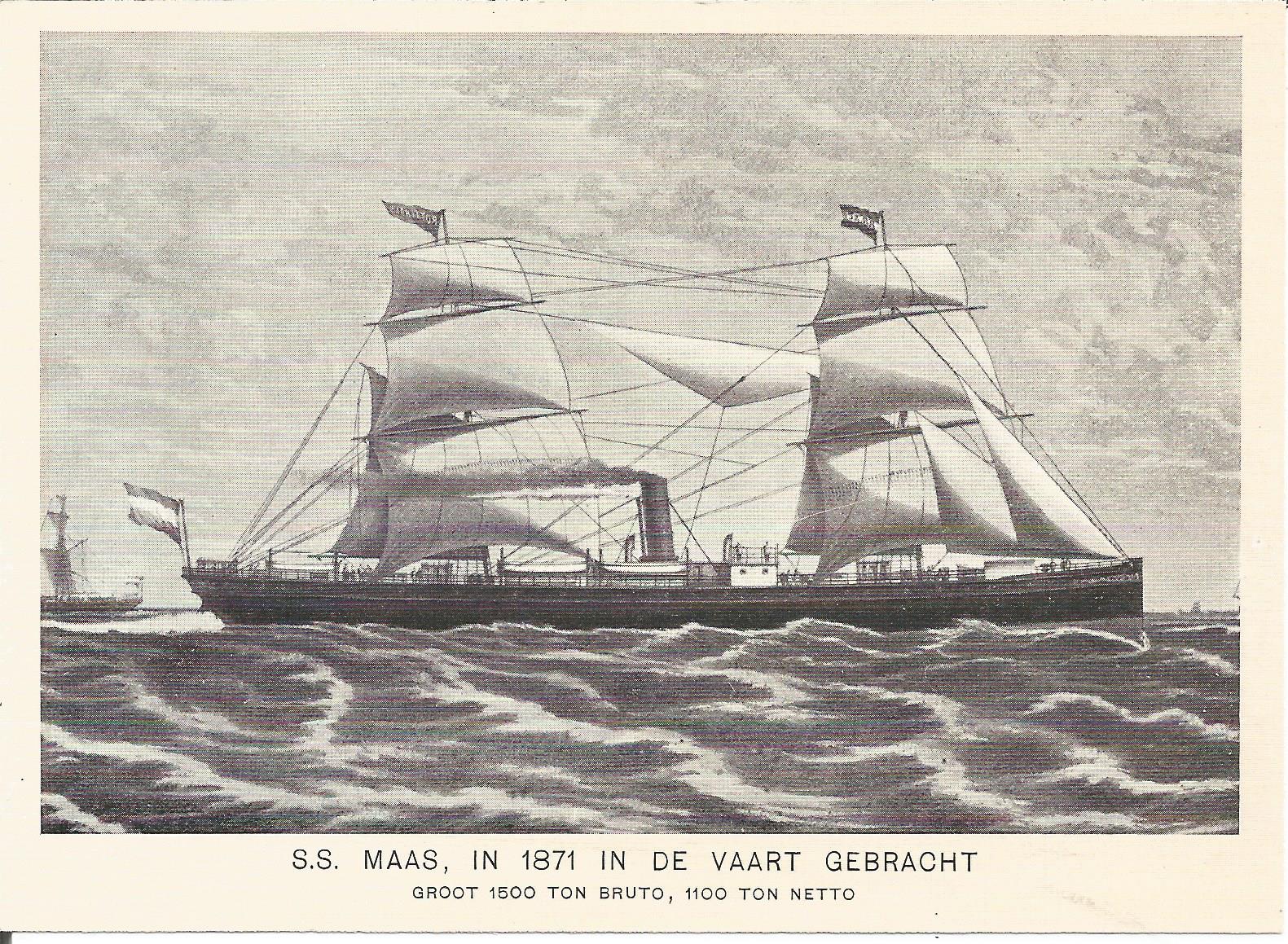 The ss Maas. Second ship of the Holland America Line. Later renamed in Maasdam I (e)

The ship is later renamed to ss Maasdam but by that time he is assigned to the ss Schiedam from June 1877 onwards. He is the first captain of the ship and as there is a gap between March and the maiden voyage it can be assumed that he was sent to collect the 3 year old ship from Liverpool. This ship was the first ship which was “on loan” to the company being owned by an independent company outside the HAL. Prince Henry (nicknamed” The Sailor”) of the Kingdom of the Netherlands was one of the investors. He was also the patron of the NASM itself. When the company had sufficient funds the ss Schiedam (I) was entered into the fleet wholly owned. 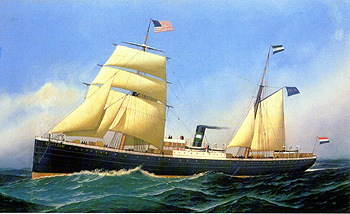 The ss Schiedam I from a contemporary painting. (e)

On 15 July 1882 he transfers to the ss Zaandam (I). Captain Chevalier must have been held in high regard by the company as this is the 2nd ship that he brings into service. Was the ss Schiedam (I) 3 years old, this is a brand new ship and the first ship built by the company in the Netherlands. She was assigned to the Amsterdam to New York service and he remains with this ship until 23 June 1885 when he signs off in Amsterdam and leaves the company. 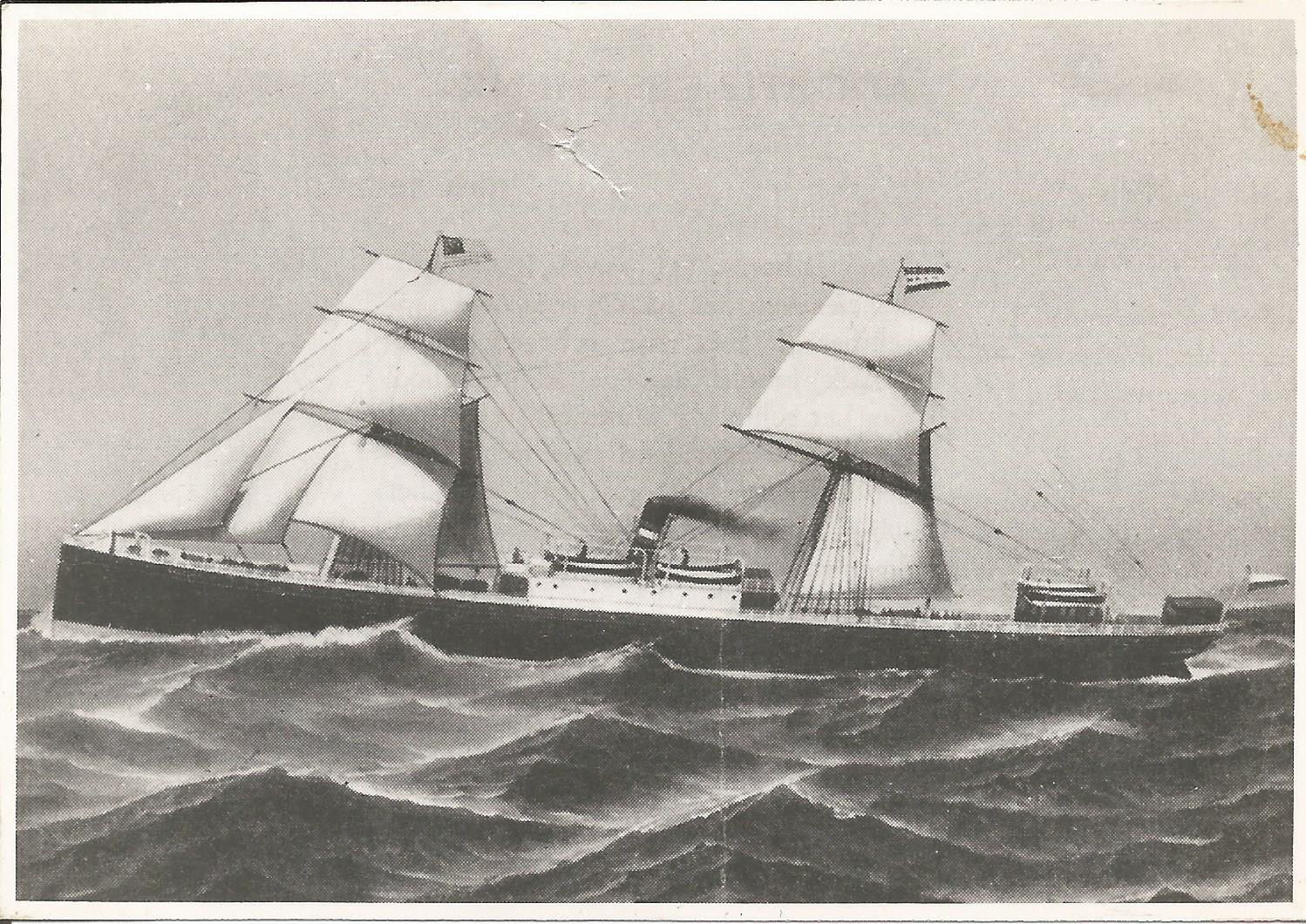 The ss Zaandam I. This is a painting by Anthony Jacobson who documented a large number of ocean liners, including  HAL ships in the 1880’s. (e)

we can follow the remainder of his career on the shore side by means of the Newspapers as he now became a public figure. First it is announced on 1 June 1884 that Mr. E.M Chevalier has been appointed Director of the local provincial ferry company  in the province of Zeeland. The county or province of Zeeland operated a local ferry service between the towns of Vlissingen (Flushing) and Breskens with four paddle wheelers and so provide da regular service across the estuary of the Westerschelde (The body of water which gives access to the port of Antwerp). 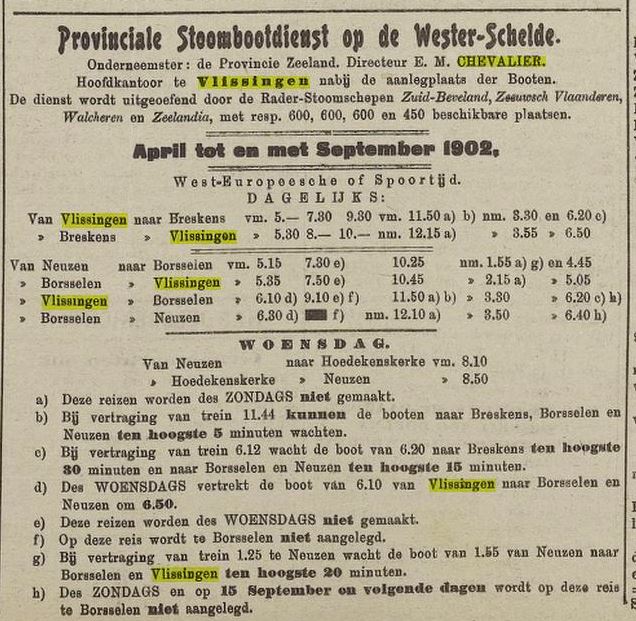 Advertisement in the local newspaper with the sailing schedules of the ferries. (d)

His 12 years with the HAL had certainly given him a good insight in how to operate steamships and the Westerschelde was a body of water which could give the North Atlantic a run for its money during bad weather.

On 06 September 1887 he is appointed as Councillor to represent a local district on behalf of the “Independents”(*). He mentioned again on  10 July 1899 when with a 100% vote he is re-elected his councillors job.

(*) In the Netherlands of those days, most of the political parties where connected to a religion and thus the representatives had a Dutch Reformed or Roman Catholic church background, The independents were groups of voters who either had a labour background or where not affiliated to a church. As we know Captain Chevalier was a Free Mason and thus automatically belonged to this group. Later Labour movements came forth out of these groups.

Then it is suddenly announced on 9 September 1903 that the day before Mr. E.M Chevalier had passed away at the age of 67. No reason is given but as he was still in function at the ferry company and a councillor it must have been un-expected. He was buried with a simple ceremony on 11 September 1903 at the local “General Cemetery” at Flushing. This coffin was accompanied by members of his local Freemasons Lodge  L’Astre de L’Orient and fellow councillors.

Transfers to HAL in early 1873

Transfers to shore function outside the company.

Last Updated: 24 February 2022 with the information and photos provided by Mr. Peter Chevalier (noted as f) for which the author is extremely grateful.