No photo yet. DEAR READERS WHO CAN HELP ME WITH SOME FAMILY PHOTOS AND FILL IN THE GAP IN THE FAMILY HISTORY ??

Captain Dirk Cornelis Wijers was born on 24 December 1899 at Arnhem in the province of Gelderland in the east of the Netherlands. His father was Egbertus Gerrit Wijers Head teacher of a local public school. (Public school as in neutral, e, g. not affiliated with a religion) His mother’s name was Aletta Jacoba Thomassen. The father came originally from the town of Barneveld in Gelderland where he was born on 31 Dec. 1856. Is wife was born in Rheden also in Gelderland and was born on 20 Aug. 1862.They had met while father was the head teacher of a local school there. They moved to Arnhem in 1889. Apart from Dirk, there were three more children. (a)

We do not know why he chose to go to sea. I have not been able to trace any “salt water” among the relatives 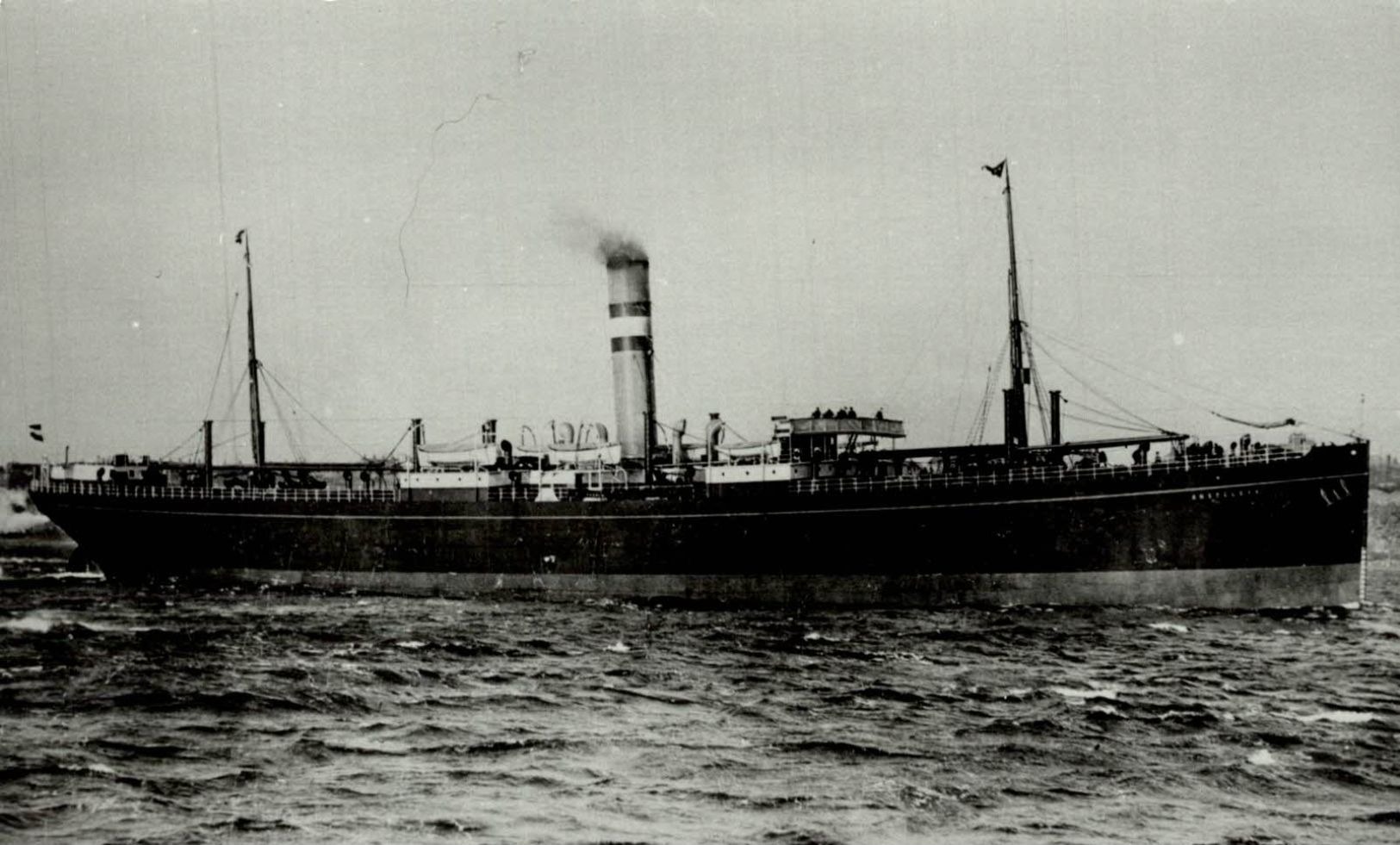 The ss Amsteldijk (I) This ship had been custom built fro the company in 1901 and often sailed from Amsterdam. Please note the fully open bridge, even the Quartermaster steering is not sheltered from the elements.

He enters the Kweekschool voor de Zeevaart in Amsterdam on 22 August 1904 and has the three years course. On 12 August 1907 he is accepted as cadet by the Holland America Line and placed on board the ss Rijndam (I). In March 1908 he transfers to the cargo ship ss Amsteldijk (I) where he remains until he returns to the academy on 28 September 1908 with a very good report. On 20 November he passes the exam for his 3rd mate certificate. As a result he is honorably discharged from the school on 23 November with an excellent report in skills, good behavior and good reports from this time ate sea.  He then returns to Holland America Line as a 4th. Officer and is placed on the ss Rotterdam (IV) which had only recently come into service as the new flagship of the company.  (b)

Following company pattern he is assigned to a mix of cargo and passenger ships depending of where he stands in the seniority of the system at the moment of the time. In 1917 he is called up for military service which works out well for both the company and himself. The company had been laying up more and more ships due to the Unlimited U-Boat war and it gave him the chance to get married.

He marries in 1917 Wilhelmina Josephina Johanna Leonarda Goossens (born 19 May 1891 at Helmond Noord Brabant) There were two children, a daughter Elisabeth Leonie Wijers and a son called Dirk. The marriage is eventually dissolved. Dirk remarried on 1 June 1932 Mary Pauline Miller in New York (Born on 28 April 1892 at Hagerod Sweden, her mother was Swedish and her father American).  Although the information available is vague, they seem to have divorced later on as well. It is unknown if there were children.  (a)

In November 1918 the First World War comes to an end and he must have been released from the Army as on 15 November 1918 he is back with the company. Working for a few days in the office and then Assigned to the cargo ship Andijk which had been laid up since May 1917 and which now came back in service. 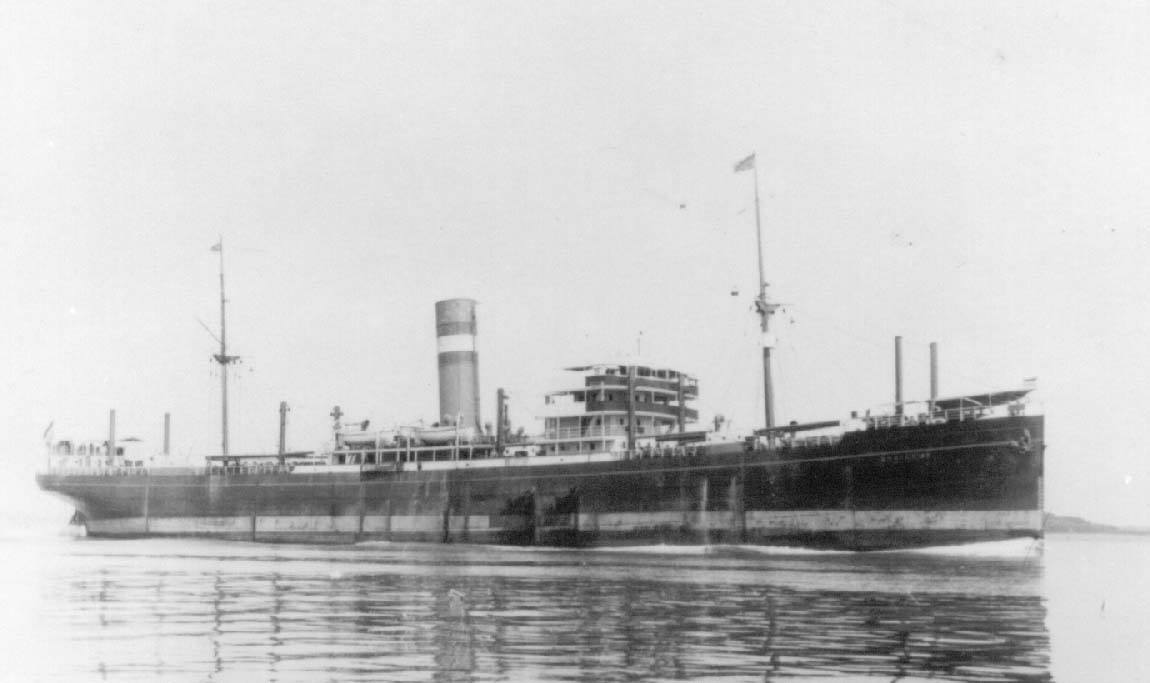 The ss Schiedijk (I) Was built in the Netherlands and was a real Holland America Line design. she sailed from 1917 to 1926 and was then sold to the VNS which was a company in which Holland America held a share and often loaned ships or personnel to.

In autumn 1920 he is assigned to the cargo ship ss Schiedijk which was employed on the Holland Britisch Indisch Lijn sailing from New York as far as Ceylon (now Sri Lanka). This was a yearlong assignment and he will not be back in Holland until autumn 1921. The company compensated these long voyages by then putting officers and crew then on ships which would be gone from Rotterdam for no longer then 1 or 2 months.  Dirk ends up on the ss Noordam (I) as chief Officer  which meant that he was coming close to promotion to captain. Normally it meant that he had to do one more contract as Chief Officer on the flagship before this would happen. 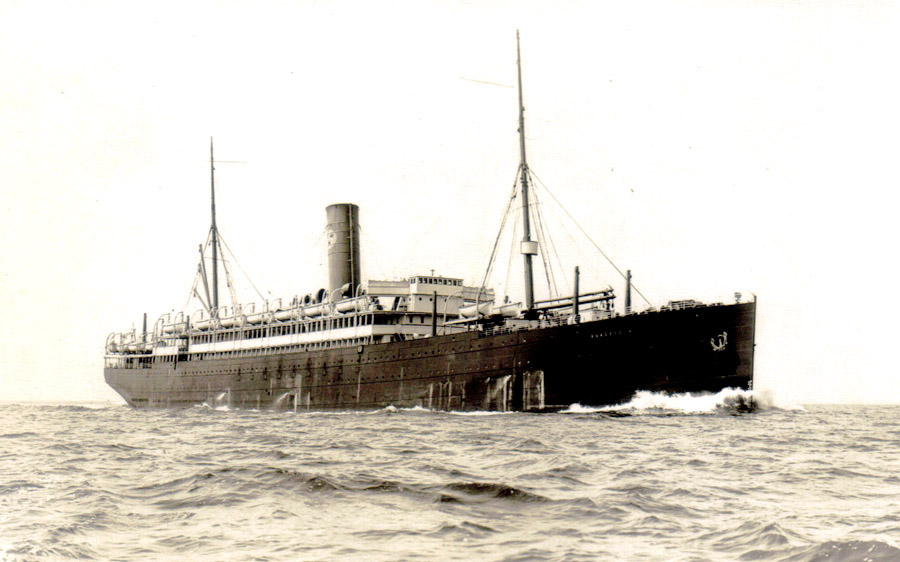 The ss Kungsholm. Chartered for just under two years to the Swedish America Line for service from Stockholm to New York. Not much was changed during the period she sailed for the Swedes and when she came back she returned to Hal service

But the company decided to charter the ss Noordam to the Swedish.  He is assigned to remain with the ship from the beginning of the charter until January 1924, when due to reaching maximum seniority he is rotated to the Nieuw Amsterdam (I). Here he remains until autumn 1925 when he is promoted to Captain and given command of the ss Ijseldijk. After stepping back to chief Officer for a period he is then assigned to the ss Vechtdijk which is sailing on the Holland – Britisch Indisch service and thus he had his second year long assignment.  He will have another of those assignments in 1931 when taking command of the ss Burgerdijk.

Then the depression starts to bite and he is set back to Chief Officer but at least he can remain working for the company and as he is now the very senior Chief Officer he sails only on the passenger ships. By 1934 more and more company ships are coming back out of lay-up and then he re-assigned as captain again. That results in the un-expected situation of being suddenly in command of the Flagship of the company the ss Statendam (II). The Commodore Captain Bijl had developed an ear infection and Captain Dirk Wijers was transferred from the ss Beemsterdijk to take the ship on a round trip to New York with a Bermuda cruise thrown in between the crossings. 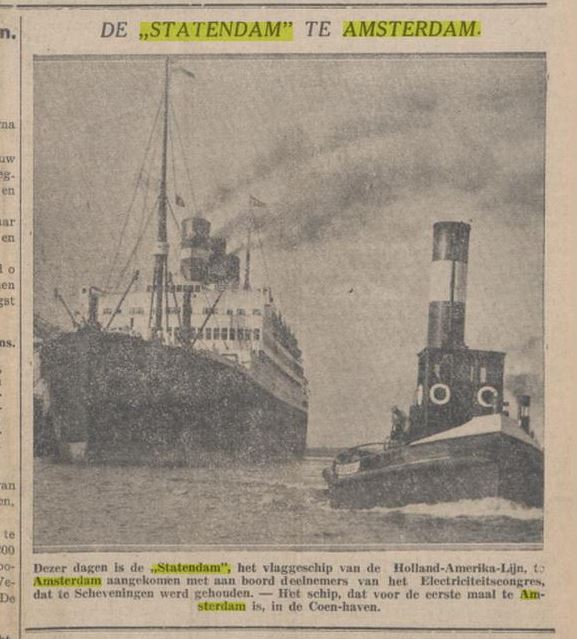 The Statendam in Amsterdam. Clipping taken from a National Newspaper. The clipping reads: In these days the Statendam, flagship of the Holland America Line has arrived at Amsterdam with on board participants of the Electricity Congress that has taken place at Scheveningen. The ship which is in Amsterdam for the first time is in the Coen haven.

Upon return in Rotterdam he then took the ship to Amsterdam for a 3 day charter. This was something fairly new for the company. Nowadays it is very common that company’s or societies charter a ship and most cruise companies have a complete “incentive cruise” department to deal with it. But pre 2nd world war it was quite unusual, although the Statendam had done it before. Now the ship had been chartered to provide the participants of a Congress about Electricity to visit Amsterdam.  Members of the “Union International des producteurs et distributeurs d’energie electrique” came to Amsterdam to visit the power plants in the area and the tourist towns of Volendam and Marken.  Until the Nieuw Amsterdam visit in the 1950’s, the Statendam was the largest ship ever to call at Amsterdam.

After another fill in for one voyage on the ss Spaarndam it was back to the cargo ships and he was assigned again to the ss Beemsterdijk and would remain there until into the war.  The Beemsterdijk was in service on the New York and Out ports run which meant that it sailed from Rotterdam via Antwerp to New York and from there up  and down the East coast to Boston, Baltimore and Norfolk with other ports thrown in if there was cargo. Then the ship would call again at New York before returning to Rotterdam. 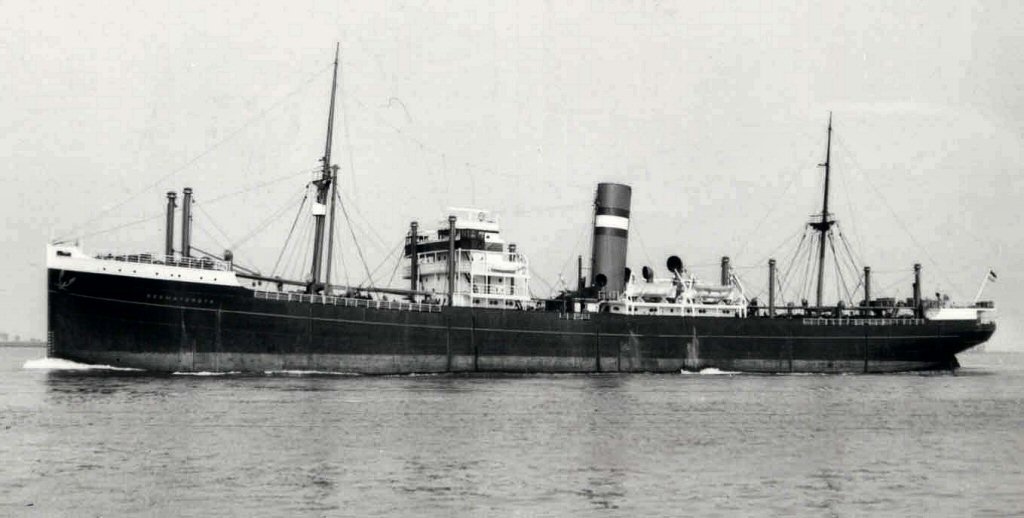 The ss Beemsterdijk. She was a series of 10 B class named cargo ships which had been part of the compensation paid by the British when they seized the Statendam (II) which was torpedoed while sailing as the troop ship Justicia. Apart from the Beemsterdijk also the Breedijk and the Binnendik were lost to enemy action.

When the war broke out in September 1939 the ship remained on this service but was in March 1940 re-directed to the Cuba and Gulf of Mexico service. From this voyage she would not return to Rotterdam as the Netherlands was invaded in May and the country and Holland America went to war. Mostly she remained on the North Atlantic service sailing in convoy when coming to the European coast.  After a 1941 Christmas crossing from Halifax to Liverpool, she left the Liverpool area on 24 January 1941 sailing as part of convoy OB277 to Cardiff.

On 26 January while in convoy and entering the Bristol Channel the ship suffered an explosion on board (later assumed to have been caused by a torpedo). While the convoy sailed on, Captain Wijers ordered everybody off the ship as a large hole in the portside hull was observed. Nobody had been injured or had died. Within 10 minutes the ship had been abandoned and everybody waited in the boats to see what was happening with the stricken ship. She remained afloat however and the captain decided to return with a boarding party to assess the situation. Eventually all crew returned. The engine room was observed to be full of water and thus sailing under own power was impossible but the Radio Officer received information that help was on the way and thus it was decided to stay on board.

In the early morning of the 27th. of January the wind picked up and due to wind and/or current the ship turned into the wind and started to roll. Suddenly it listed heavily over starboard and sunk in about 3 minutes.  39 crew including the captain went down with the ship.  It was not until 13 May 1941 that the company was able to inform the relatives at home in the Netherlands . For the full story see https://www.nederlandsekoopvaardijww2.nl/nl/ondergang

Captain Wijers was 42 at the time of his death and far away from his mandatory retirement at 60. He was one of the 5 captains who lost their lives during the war, while serving the company and the war effort. (Captain Korver, Captain Ruygrok, Captain Stamperius, Captain Wepster) Captain Wijers is listed on the WWII company monument located in Rotterdam.

26 January the ss Beemsterdijk , while in convoy had an explosion on board and the ship sunk.