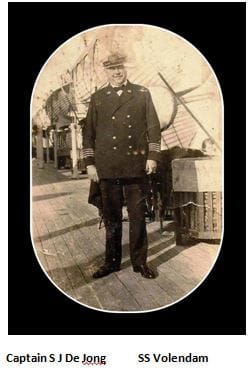 He was born as the youngest of three children. His father was Hillebrand Sievert de Jong who died in the winter of 1875 while in command of the 3 mast Barque “Noord Holland” enroute to Halifax. He must have been a long standing captain as he was mentioned as being a captain of the barque Nederland & Oranje in 1851.

For Sieverts Jr. things became even more tragic as his mother died 10 days after she received the news of her husband having perished in the North Atlantic. At the age of three he was then placed in an orphanage in Den Helder.

At the age of 11, he was released from the orphanage and taken on as sailor O.S. (O.S = Ordinary Sailor or new sailor) on board a three mast Barque called the “Libra”. This was a ship was registered in the North Netherlands with as home port Nieuwediep and newspapers quote the Captains name as C.Krijnen. Based on newspaper listings the ship was employed on a regular service to Russia and other Baltic States. He was shipwrecked with this ship and while many of the crewmembers lost their lives, he survived being saved by a local farmer and his wife who found him, nearly frozen to death, on the beach.

It does not seem to have diminished his interest in the sea as family records indicate that the continued sailing on “houtslepers” specialized ships which carried wood from the Baltic States to Western Europe. These were sailing in what is called the “short or coastal trade”, and companies from the Northern Provinces of Groningen and Friesland specialized in this.

By 1890, when he was 17, Family records indicate that the joined the Holland America Line as cadet.

Here we have a challenge as the company records only records the day he joined as 4th. Officer, 21 Feb. 1893. For all other officers during that period, the books do indicate if they joined as a cadet officer or directly as a regular officer.

Editor: This needs further investigation because he must have been a cadet officer somewhere and gone to school somewhere and paid for is schooling somehow. Hopefully I can find something in the yearbooks of the maritime academies. For the time being my guess is that he went to Amsterdam as the “Kweekschool” they had a support program (Vaderlandsch Fonds) to encourage young men who had fallen orphan from sea going fathers to go to sea and the school elders paid for their complete education. Once done you normally returned to your Alma Ater for obtaining their next ranks. Added to that, he is at school in 1902 and 1903/1904 for his 2nd and first mate license and that coincides quite nicely with getting married and getting babies.

This brings us then back to the career of Captain Sieverts De Jong. Not long after his marriage he was made Chief Officer and mainly sailed on the passenger ships until he was promoted to Captain in 1909. Just before he was with Captain Bonjer in Belfast to collect the new flagship the ss Rotterdam (IV) in 1908. This indicates he was the Sr. Chief Officer by now and indeed promotion came in 1909. As was tradition at the company, he now had to start on the smallest ship again, being the youngest captain, and work his way up gaining senority or the bigger ships. 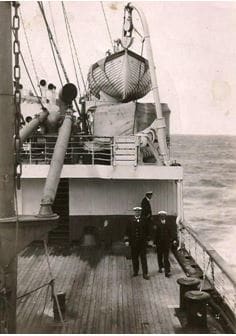 Captains inspection rounds. Looking at the Lifeboats and deck housing it looks like it is the Volendam (I) (b)

He still divided time between Holland America and his position in the Dutch Royal Navy reserve and also did a spell as Super Intendent in New York. This function basically entailed running the practical side of the operation at the Holland America Line docks. Around this time the company preferred to use very senior shore people for that function or Captains. The captains on the ships in those days were notoriously bad in taking orders from landlubbers, so seniority was essential and if not available then a colleague was acceptable as well.

From the family archives comes a snippet of interest relating to the captain’s hobby, oil paintings and he was quite good at it as the samples below will show.

But the next thing of interest is the saving of the Dutch Steamer Mecklenburg. Although the Netherlands were neutral during the First World War, it did not stop the ships hitting mines or getting torpedoed on occasion, “by mistake”. The Holland America Line itself lost several ships that way. The ss Mecklenburg was a ferry sailing for the Stoomvaart Maatschappij Zeeland on the service Tilbury to Flushing. She was 7 years old at the time and measured about 3000 tons which was a respectable size in the early 1900’s. On the 27th. of February, while sailing from Tilbury towards Flushing she hit a mine laid by the German Submarine UC -7 around 11 am. in the morning. (This submarine sunk seven months later by hitting a mine itself) The Westerdyk with Captain Sieverts de Jong in command had just left Rotterdam that day to commence voyage 21 and was sailing towards the Downs for the compulsory inspection by the British Authorities; before being allowed to continue the voyage to the North East Coast ports of the USA. To get there the ship followed a course following a mine free route which brought it near Galloper Light ship east of the estuary of the Thames. 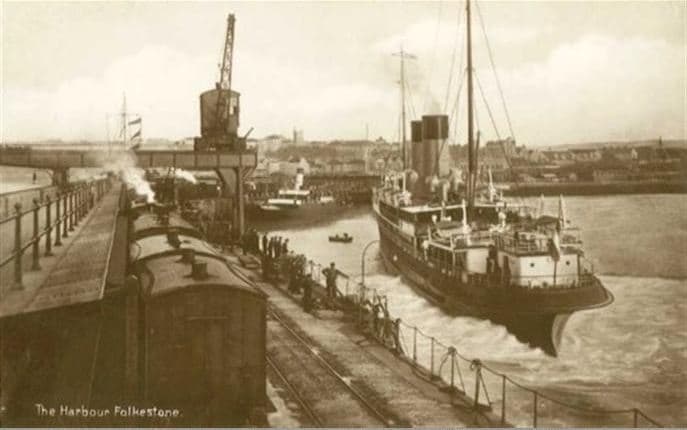 Temporary postcard showing the ferry ss Mecklenburg during a call at the English port of Folkestone.

Five steamships of which three were Dutch (Westerdyk, Samarinda, Prins der Nederlanden) came to the rescue and in the two hours before the ship sunk, they managed to get all the passengers, crew and mail off the ship. The Westerdyk took all 46 passengers on board and 19 crew (including Captain Redeker of the ship). Also on board was the saved Mail. The Samarinda collected the other 12 crew. Both ships continued to the nearby Downs and went to anchor there. Here everybody was transferred to the Dutch Passenger steamer Tubantia which took them from the Downs to Amsterdam. The crew arrived on March 2nd. back in Flushing. The Westerdyk remained at the Downs until the 29th of Feb. and after being released by the British authorities continued her voyage to the USA.

As was tradition in the company, Captains received medals if they achieved a number of crossings. Because he had been so long on the Westerdyk during war time it took until 1926 before he clocked up 100 Trans Atlantic voyages.  Owner of the medal unknown, photo courtesy Mr. Wim Barten.

Captain De Jong remained with the ss Westerdyk until the ship went into precautionary lay up (due to the unlimited German submarine war) in New York on 30 June 1917. On 21 March 1918 the ship was seized by the Americans and then Captain and crew returned to Holland with the ss Nieuw Amsterdam. On the 25th. of September 1919 the ship is released by the Americans. It is assumed (subject to verification) that the Americans delivered the Westerdyk to Rotterdam as Capt. De Jong was  reassigned to the ship on Oct. 06 and left 5 days later on the next voyage from Rotterdam. 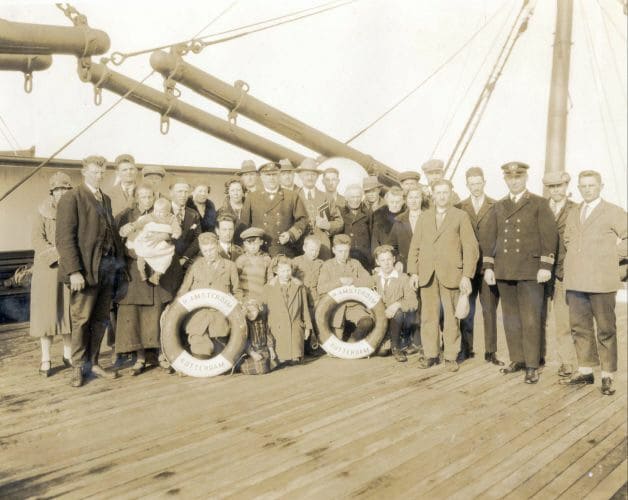 Captain De Jong on board the ss Nieuw Amsterdam I. He is in the center. The officer to the right is the Staff Captain. This depicts a group of Dutch people from island of Schiermonnikoog emigrating to North America.  (c)

The slow climb to the more and more senior ships continued until he is assigned to the Nieuw Amsterdam (I) in 1925. Except for two fill in’s on the Volendam (I) this was to be his ship until his retirement in 1929.

The ss Nieuw Amsterdam (I) was engaged on the express service to New York, together with the ss Rotterdam (IV). The ships called at Rotterdam, Boulogne Sur Mer, Southampton and New York with the Nieuw Amsterdam also making regular calls at Halifax with Canadian emigrants. 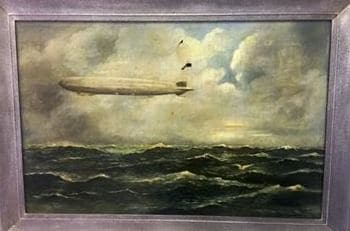 It would land two days later in New Jersey. Capt. De Jong documented the experience with an oil painting.

Although the ss Nieuw Amsterdam (I) ran the express service in tandem with the ss Rotterdam (IV) she occasionally called at Halifax when the emigrant trade gave reason to do so. The below photos depicts such a call. the ship docked then at pier 21, which is still there and now in use as the town’s cruise terminal. It also houses the Canadian immigrant museum and has records of everybody who entered Canada via this port. Unfortunately it does not have any information about those who sailed the ships. 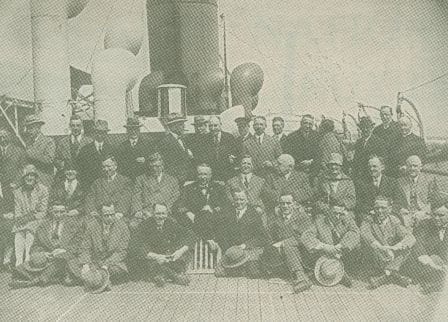 Captain de Jong on board the Nieuw Amsterdam I voyage 178 at Halifax on 8 march 1928, where he received a walking cane with gold handle. Occasion was the the NA being the first ship to dock at the new pier 21. the walking cane was inscribed accordingly.  (4). Photo copied from a contemporary newspaper article.

Captain Sievert de Jong retired at the age of 55 which was the regular retirement age for Holland America Captains. It only much later that the retirement age was raised to 60 years.  He  spend his retirement days in the town of Voorschoten located between the larger cities of The Hague and Leiden in the west of the Netherlands.  As with all Dutch people his life received quite a shock when Germany invaded the Netherlands in May 1940 and had to suffer the indignity of having to have an German Officer (Uber Leutnant) quartered at his place. It is easy to imagine that there was some friction when there are two “commanding officers” in one house.  Four years later  on 22 January 1944 our Captain passed away and was buried at the Rhijnhof (1) cemetery in Leiden.  (Municipal archive Wassenaar in Voorschoten (Netherlands), Civil registration deaths, Voorschoten overlijden 1941-1950. Voorschoten, Voorschoten, archive 731A, inventory number 34, 1840, record number 5)

The following is information found in the personnel records “Stamboek” of the company, as held in the Holland America Archives, stored at the Municipal Archives of the City of Rotterdam.

Starting on 5 March 1912 relieved from the command of the steamship Gorredijk and temporary placed ashore in Rotterdam awaiting for this assignment. To leave on 30 March 1912 with the steamship Rijndam for New York, where on our request relieves the dock super intendent  Mr. Willem K Toutlemonde who is leaving the company on own request. (Retirement)

30 Jan. 1914       Temporary ashore, waiting for departure to Cadiz to sign on the ss Rotterdam as asst. captain

Due to the confiscation of the ss Westerdijk, returned with the ss Nieuw Amsterdam to Rotterdam,