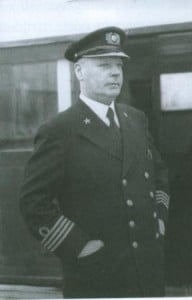 Captain Kleijn was a ships master in the 1940’s and 1950’s. His name is also sometimes spelt as Kleyn.

Capt. Kleijn  joined the company in 1910 as 4th officer on the Nieuw Amsterdam (I)

After that made one more trip as captain on the Almdyk when King Leopold of Begium sailed on her from Lisbon to Aruba.