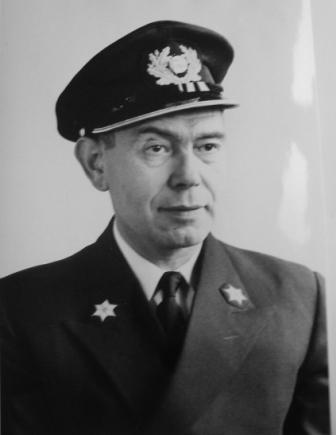 Captain Georg Scale. This photo is from the 50’s. most likely shortly after taking command.

He decides to go the sea and enrolls on 05 September 1932 at the Kweekschool van de Zeevaart in Amsterdam for the one year course. Which indicates that his  secondary schooling included a full course in Mathematics and Physics. His school marks also indicate an affinity with those topics as it were his highest school scores. He completes his education in  one year.

His father is then noted as being a “Department Head of the Machinery Company “Breda” in the town of Breda”. He is discharged from the Academy on 11 July 1933 and returns to his home at Hendrikstaat 16 in Breda.

On 17 July 1933 he joins the Holland America Line as cadet officer on board the ms Leerdam. Followed by similar assignments on board the Boschdijk and the Delftdijk. On 07 October 1934 he is dismissed from the company to return to school to study for his 3rd Mates exam.

And obtains his 3rd mates license on 20 Febr. 1935.  It is noted that his school and sailing reports are considered  as Very Good. 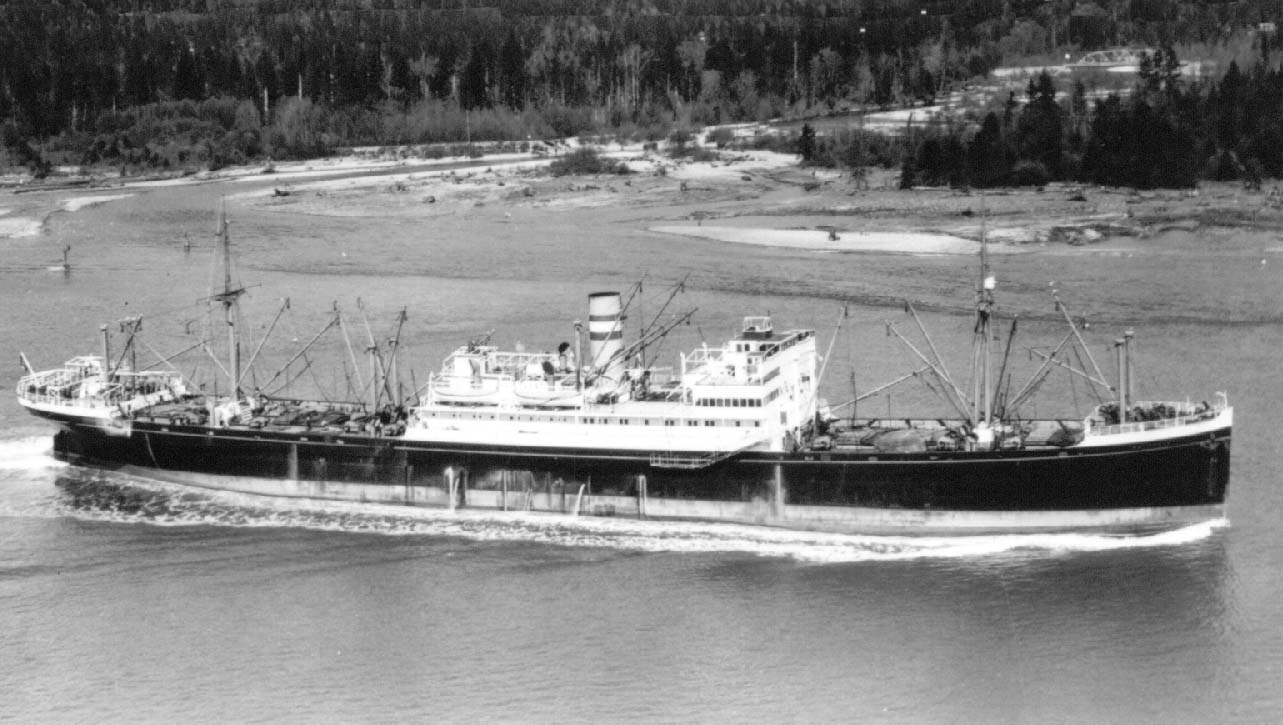 The ss Delftdijk was in service on the route Rotterdam  to Vancouver. On this ship he spent most of his cadet year. Here the ship is seen approaching Vancouver.

He rejoins the Holland America Line on 03 March 1935 while the depression was still not finished and while he sails, he also spends short periods on the ships while they are in Rotterdam and not sailing. It was a Holland America routine to send the whole crew home after returning from a voyage and then have a “Watch- crew” come on board to look after the ship. This brought some money in the pocket but was not always great fun as in the winter the ships boiler(s) were not always kept on if it was expected that the ship would be alongside for a longer period. No boiler = no steam and no steam means no heat or electricity. Then a cable had be pulled from the shore to get some light on board but this only worked when docked and often the ships were put on the buoys while between voyages. 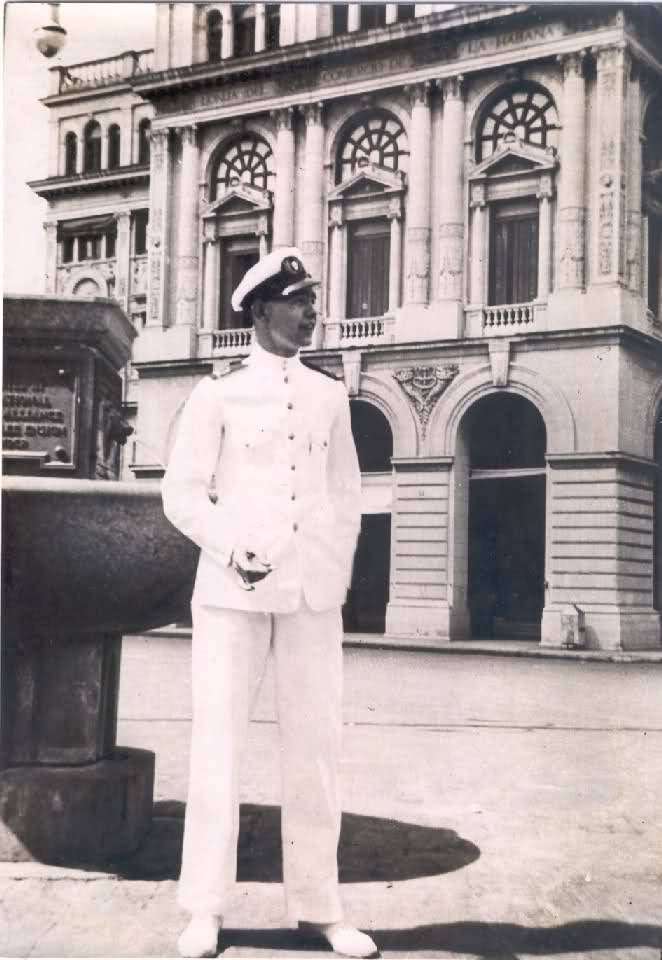 Georg Scale as fourth Officer (c) as was customary in those days, if there was shore leave, an officer went ashore in his nice uniform with cap. (ED: I think this photo was taken in Havana) In August 1939 we find him board the ss Spaardam II (Captain Folkert Dobbinga Sr) which was making a voyage from Rotterdam to Antwerp – New Orleans – Tampa – Mobile – Houston – Galveston – New Orleans and then back to Europe. 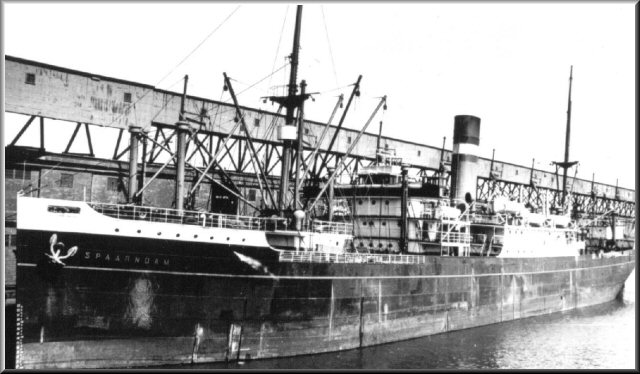 The ss Spaarndam (II) Built in 1921 it had originally 2 funnels but in 1935 the passenger accommodation was reduced and one funnel was removed.

By that time, the 2nd World War had broken out but the Netherlands were still neutral. That meant that the Ship had to stop in the Thames of the town of Deal; where it was at anchor from 09 October to 18 November awaiting inspection by the British Authorities against contraband. It then docks between 18  and 26 November at Gravesend and is then released with permission to sail to Rotterdam. The next day, while sailing out of the Thames Estuary the ship hits a mine, catches fire and burns out.  A cooks mate dies in the explosion which rips through several decks and 3 other crew perish during the lowering of the life boats.  The ships drifts ashore and completely burns out due to the cargo of cotton bales on board. 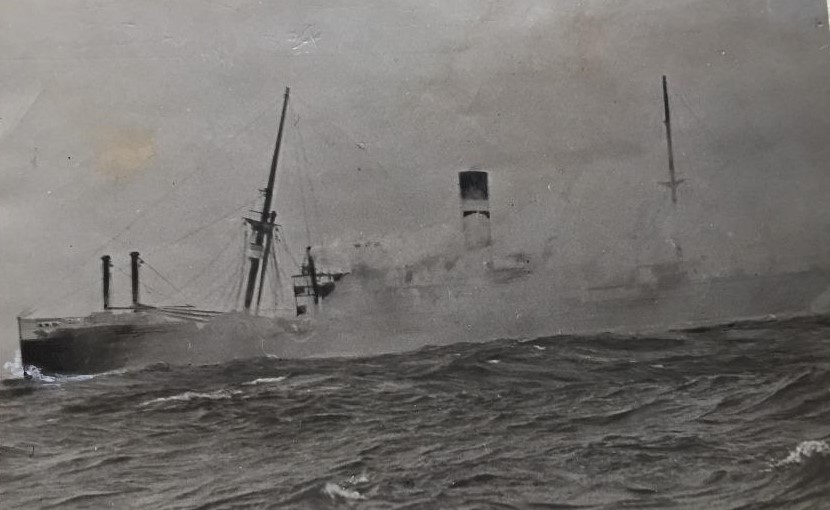 The ss Spaarndam (II) on fire.

Just before this voyage he marries at Rotterdam on 24 May 1939 Helena Dorothea Jacoba Vlamings (22 Aug. 1915 – 23 march 1973) as daughter of Fransiscus Carolus Maria Vlamings and Jacoba Paulina Bouw.

During the war he was stuck ashore as he happened to be on leave when the invasion came. Unknown is what he did between 1940 and 1944. But then he was arrested and sent as “forced labor” to Bielefeld in Germany where he was employed as baker. The German bakers (even the older ones) had by that time being called to join the German Army.

After the capitulation of Germany he was invited to join the US Army (194 th. Glider Infantry) to act as a Translator due to his language knowledge. (A lot of young non-military Dutch men ended up in these functions, coming from the most unusual backgrounds) He had his own car with driver and all sorts of perks with a ration card included.

On 25 July 1945 he returns via Venlo, in the south east of the Netherlands back into the country.

Captain Georg Scale passed away on 06 August 1982 in the town of “Loon op Zand” in the province of North Brabant aged 70.

Then to school for2nd mates license. Was paid 9 days of leave.

Sailing periods on Ryndam, Prinses Margriet and Maasdam. Dates still to be confirmed. 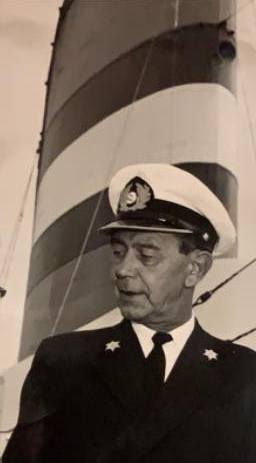