This is another of the more elusive HAL Captain’s as I have not been able to trace a single photo yet. Very unusual in this case as he did sail for over 30 years for the company and most of his career on the passenger ships.

Thus if there is any family out there who remembers anything about Captain Braun or has a photo, Please contact me on Captalbert1@aol.com

What we know so far is the following,

He was born in Amsterdam on 10 August 1877 as son of Wilhelm Christiaan Braun (Clerk) and Anthonia de Morie.  (b)

(ED: Taking his name in consideration is that his family was part of a wave of German immigrants who settled in the Netherlands after 1865 when the boom in the port of Amsterdam and Rotterdam started due to the arrival of the rail roads which connected the Netherlands with Germany) The Family records in Amsterdam indicate that the family transferred from the town of Utrecht where his mother was born and settled in Amsterdam in 1874.  Reinier was born in 1877; there was a sister Josephina Paulina born in 1882, a brother Alphonsus born in 1883, a brother Josef Johan born in 1887 and the oldest brother Hendrik Jan born in 1875. 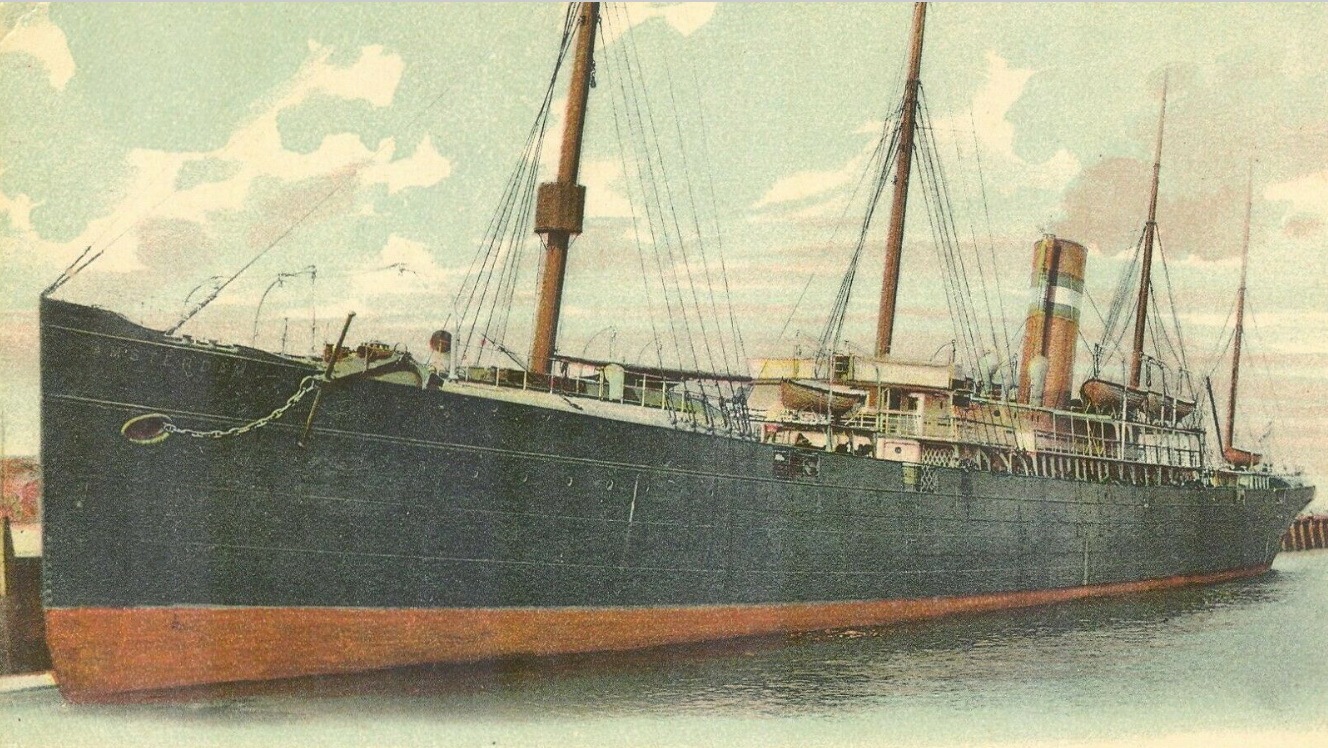 The ss Amsterdam II. As seen here on a hand colored postcard. (a)Although he was born in Amsterdam he does not show up in the registers of the local Maritime School which is quite peculiar as that school had a good bursar system in case there was not enough money in the family to pay the fees. But he must have graduated somewhere as in August 1894 he joins Holland America as a cadet on the ss Amsterdam (II) .  This ship was sailing from Amsterdam so it would not have taken him long to get home after a voyage.  After his cadet ship he returns a 4th. Officer to the company. 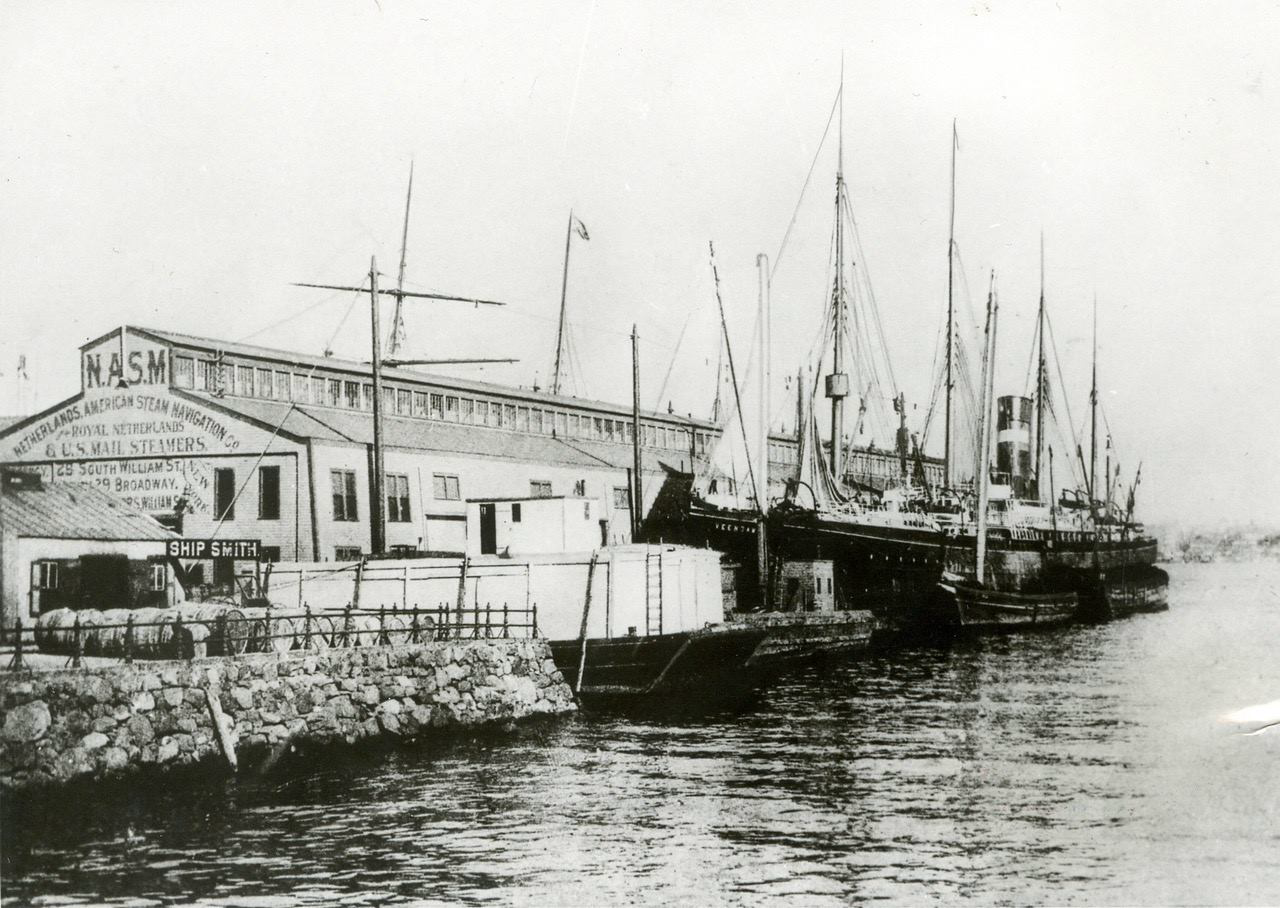 The ss Veendam (I) see here docked in Hoboken New York. (a)

In 1898 he is on board the ss Veendam, when it hits a submerged wreck on 06 Feb. while on a North Atlantic crossing. To hit such a wreck was not uncommon in those days and one could not do very much about it, as you could not see the derelict hull. Many of the sailing ships were still made of wood and when they caught fire they would burn down to the waterline and then the sea would stop the fire. As cargo holds are not much more than barrels, that barrel will stay afloat if the fire did not breach all the decks in the hull. And such derelict hulls thus often stayed afloat by being nearly or completely submerged. The ss Veendam (I) hit such a wreck and the damage was so severe that the propeller shafts broke and the ship started to take on water.  The Captain (G Stenger) ordered everybody into the boats and then sets the ship on fire and opens the sea cocks to ensure that the Veendam also not does not become a semi submerged wreck. All Passengers and Crew are saved by the American passenger ship St. Louis and landed at New York.  Braun arrives home on 25 February and is given one week of vacation and then joins the ss Spaarndam. Shortly after he is also accepted in the Dutch Royal Navy Reserve and he will remain with them until 1922. He does together with the 2 other HAL officers.

On 16 January 1907 he marries at Amsterdam Sophia Hermina Hooge (Born on 08 March 1880 at Nieuwer Amstel – died on 27 July 1955 at Wassenaar)) working as a school teacher. (Daughter of Johannes Philibertus Hooge (diamond cutter) and Sophia Hermina Gerstel). He has time to do so as he was assigned as Chief Officer to the ss Amsteldijk (I) which had arrived back in Amsterdam on 12 January 1907 and did not sail until again until 26 January. Eventually one son is born, Wilhelm Jozef  on 11 July 1913.  An earlier son, not named had died on 06 November 1909

A peculiar situation with his career now becomes apparent and that is that he hardly sails on the cargo ships. Apart from one contract as Chief Officer and the period of captain from 1911 to 1922. The rest is all on the passenger ships during a career which lasts 37 years.  When he is assigned for the first time as captain to ss Gorredijk (I) he knew that he would be on the cargo ships for a while as that was the way the seniority system of the company worked. Whether he preferred the passenger ships in the same way as some of this colleagues preferred the cargo ships, or whether it was just by co-incidence, we do not know. 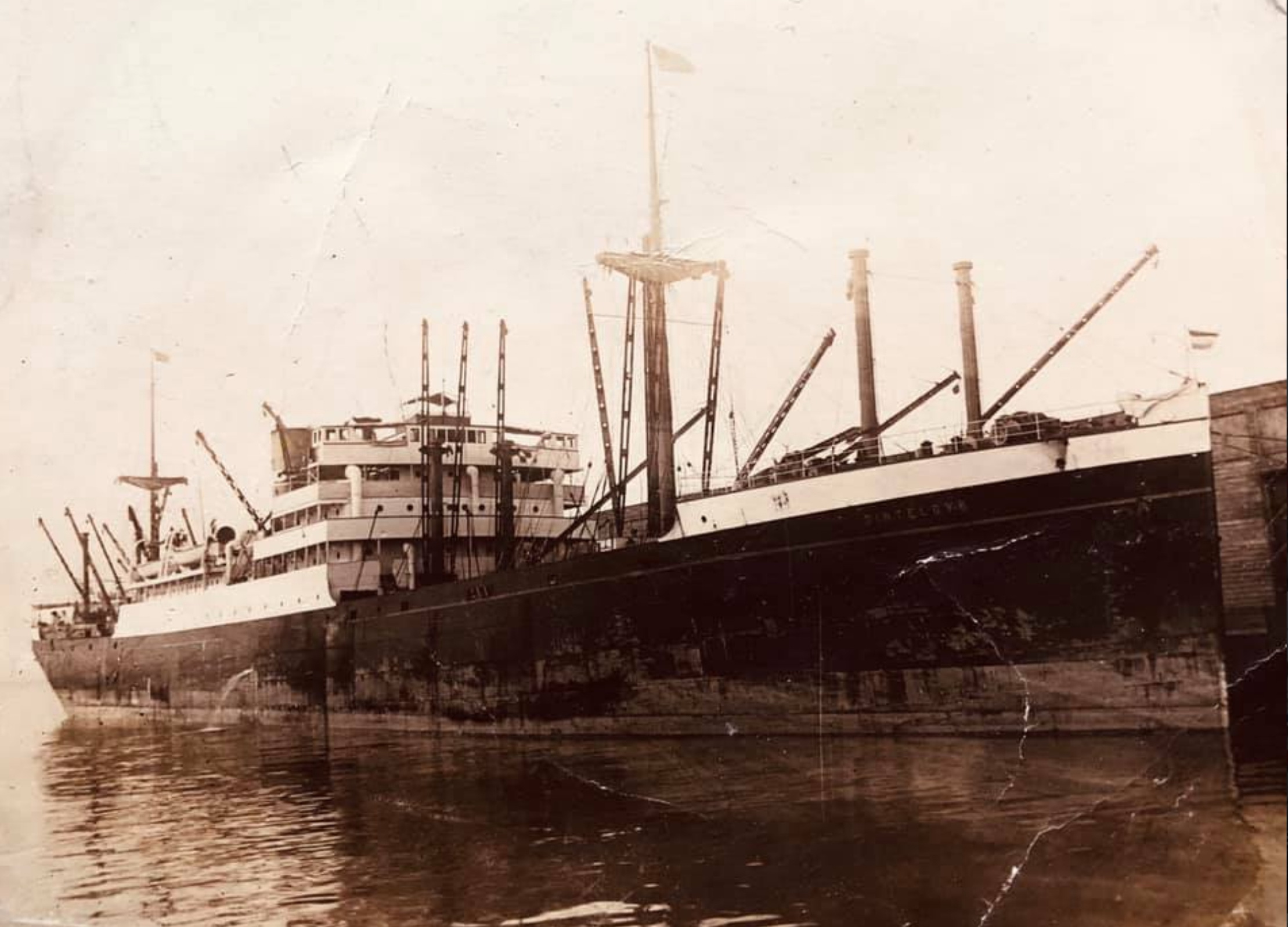 The ss Dinteldijk (I) although the photo is undated, this one is most likely from early in her career. (a)

From August 1912 to March 1913 he is on sick leave and the company records give a non conclusive note about having to keep rest.  The regular cargo rotation continues until he returns to the Passenger ship with an assignment to the new brand new Dinteldijk (I) by collecting her from the shipyard and bring her to Rotterdam and then making the maiden voyage.  He is then assigned to the ss Maasdam (II) which sailing on the Rotterdam to The gulf service via Portugal and Spain. Although the ships were not much different in size to those on the North Atlantic service, this service was considered to be more prominent that then the west coast service to Vancouver. He then spends most of the 1920’s on board this ship.

In Dec. 1926 he arrives with the ss Maasdam in Rotterdam after having dealt with a serious fire on board. On 30 November smoke was detected coming from the galley area. A quick attempt to extinguish the fire did not work so the area was sealed off and hoses where used to cool the bulkheads down while the decks started to buckle due to the Tabaco located in the lower holds catching fire. The 90, all male Spanish travellers, were evacuated to the smoking room. Later on it was reconstructed that the fire had started in the linen room and from there the fire spread to the cabins of the passengers, and these all burned out. The true cause of the fire could not be established but smoking of the passengers was considered a most likely cause as there had been similar issues with that before. 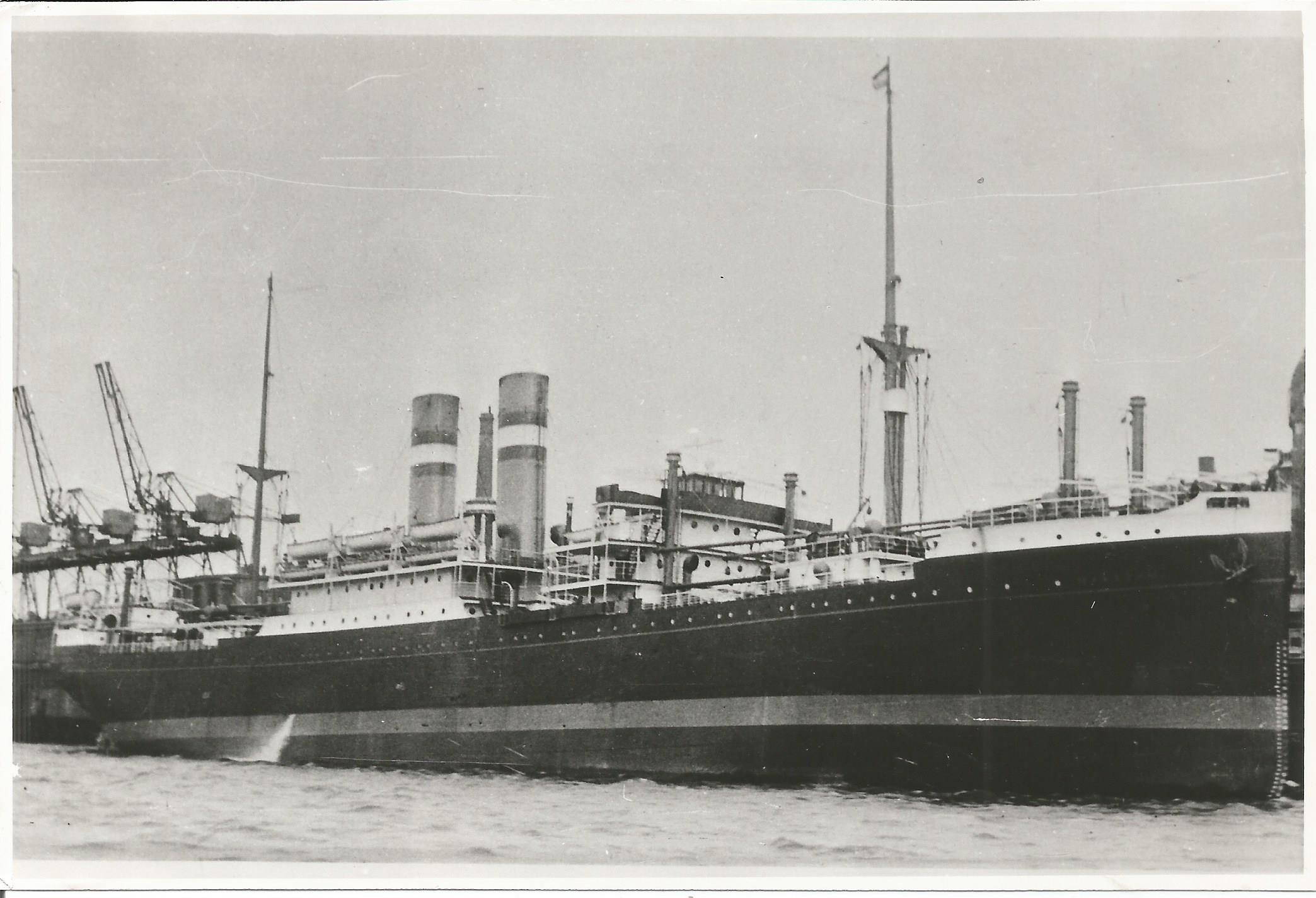 The ss Maasdam (I) was one of four sisters, built for the Cuba and Gulf of Mexico service. In 1934 her 2nd (dummy) funnel was removed, but Captain Braun will hage only known her with two funnels. (a)

This until 1929 when he is assigned to the ss Veendam (II) which together with her sister the ss Volendam (I) ran the intermediate (read slow) service to New york via Rotterdam, Boulogne sur Mer, Southampton to New York with often calls at Halifax with emigrants. This ship is also given in charter for most of the year of 1930 to a New York travel agency for cruises from New York to Bermuda and the West Indies.  This given the peculiar situation that he is away from home for an extended period from June 1930 June 1931 when he is finally relieved at New York by Captain Lagaay and he returns to Holland as passenger by the ss Statendam. Normally a year long voyage was only made on board the cargo ships and then only while being a Jr. Captain.

This return voyage is also the end of his career as he is put on standby money and dismissed from the company on 01 Jan. 1932 at the age of 55, which was the (early) regular retirement age. 60 years was the mandatory retirement age.   There is a letter in the company archives which states that his leaving the company was due to the Depression taking hold in the Netherlands and several other Captains where “retired” as well. It is unknown what the thoughts of Captain Braun where in regards to this.  On 16 July 1932 he is awarded the Gold Medal of the Royal Dutch Meteorological Society (KNMI) for the way the meteorological logs were kept on board his ships. He had already received the silver medal for the same work in April 1923.

the ss Veendam (II) in 1932. This shows the ship with the HAL colours removed from the funnels indicating that she was in charter. (a)

In Feb. 1930 the newspapers advise that the ss Veendam had encountered a very bad storm with 90 feet waves causing the hatch covers to give in, and the water to raise to 4 feet in the 3rd class dining room (which was located in the bow) Also the chartroom 60 feet above water was totally destroyed, as well as several lifeboats and 40 windows. Also other ships reported heavy damage and injured passengers. The ship had sailed straight into a hurricane force wind on 30 January which produced a freak wave which was estimate by the captain between 80 to 100 feet and which swept clear the deck from bow to stern. Some of the debris was swept into the ship causing 60 passengers to be stuck in the Smoking room. The ship, while steaming forward, was moved back by 69 miles and had to hove to, to wait for the waves to subside. It arrived 3 days late in New York after a call at Halifax to bunker fuel and landing 76 passengers. The sip was repaired in New York but was able to commence on 11 Feb. a cruise to the West Indies.

The population registers of the city of Rotterdam indicate that he spend two years in the States, given as having gone to New York  between 13 Aug. 1931 and 29 April 1933. Then the whole family returns to The Netherlands and settles down in Wassenaar. There is no record of why he was in the USA for two years.

Then the history trail stops and we only see him noted in the newspapers when he attends the funeral of Commodore van den Heuvel in June 1940.

(a) From the collection of Capt. albert Schoondebreek

(c) HAL archives as held by the Municipel Archives of the City of Rotterdam.

After the sinking of the Veendam in Feb. 1898  on 12 Feb. taken per ss St. Louis to New York  and from there returns with the ss Spaarndam as passenger  to Holland. Arrived on 25 Feb. temporary ashore.

as passenger on ss Statendam