No Photo found yet. Also a large portion of his biography (after 1931) is still missing, so dear Reader please help.

Born:   at Den Helder on 22 May 1883. The town is located at the top of the province of Noord Holland in the Netherlands.

It seems that the grandfather Hermann Buhse left Dinslaken Prussia sometime in the 1850’s – 6o‘s and settled down in Den Helder as a horologist specializing in watches and clocks and related repairs. There were a number of children who all found employment in the area and one of them was the father of our captain. One uncle was appointed as  German Consul for Den Helder and surrounding area in January 1897.

His father was Johan Bernhard Gustav Buhse and is noted in the archives as a watch maker. He was born on 27 December 1836 in Dinslaken, Prussia. His wife is Henriette Ottilie Haape born on 28 September 1844 also at Dinslaken Prussia.  They married on 26 November 1872 at Dinslaken. Both come back to Den Helder and join the family business. In 1882 the Council of the town of Obdam expresses in a newspaper article that Mr. Buhse had repaired the local clock tower in a very satisfactory way.

On 27 April 1875 Father, and thus the whole family, obtains Dutch Citizenship. Several children are born, all at Den Helder.

The home town of Den Helder had and has a large port which was and is the home of the Dutch Royal Navy. Gustav had an uncle who was an engineer on the Navy ships. He had another uncle who was a tugboat captain and this might have been the reason he choose to go to sea. It is unknown which Nautical School he attended but as Den Helder did have one, it is not farfetched to assume that he went there. He would have been able to walk to school every day.  School normally took 3 years to complete, followed by a one year apprentice ship but whiche company is unknown as it was not HAL.  Once back he passes for his 3rd mate’s exam on 15 February 1906. As there is a large period between passing his exam and joining Holland America he might have returned to his old company and maybe did not like it.

Whatever happened, he joined Holland America on 14 November 1906 as a fourth officer and is assigned to the ss Statendam.  Which was after the new flagship (the ss Nieuw Amsterdam) the most prominent ship in the fleet. 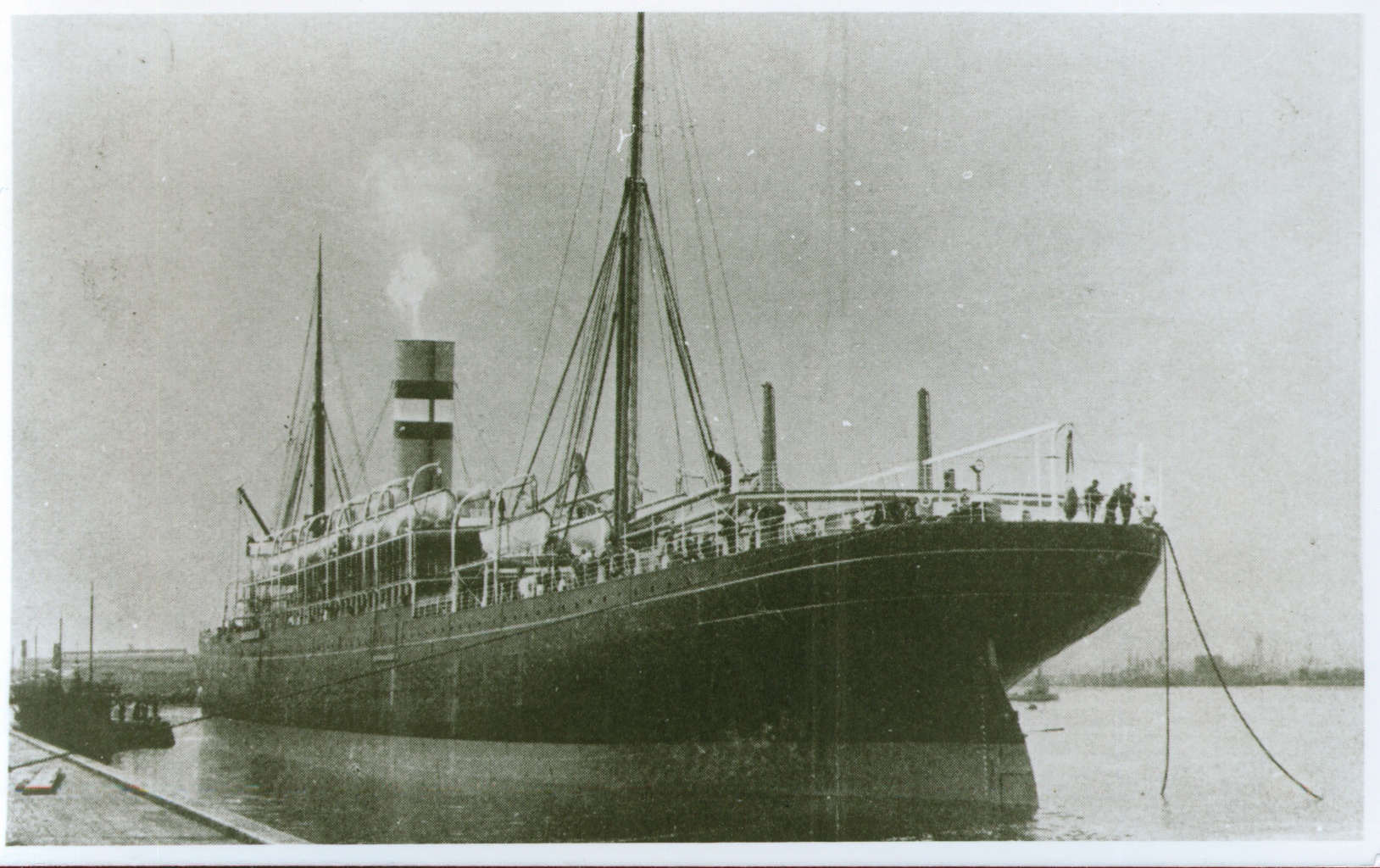 The ss Statendam (I) seen here from the stern. According to contemporary newspapers this was the first Holland America Line ship where the company did not shirk to add a bit more glamour to the interior.

Somewhere around 1906/1907 his father starts a partnership with another watch maker Mr. Fehr and they open a shop in Rotterdam for new watches and repairs. He makes it into the newspapers in 1908 when his shop is burgled and the thieves make off with 44 golden ladies and gents watches. He is alerted by the noise and once entering the shop tries to shoot the disappearing thieves with his revolver but misses.  The police later manages to apprehend some of those involved and also some of the watches. On 11 October 1911 the family officially moves from Den Helder to Rotterdam and that move includes Gustav, his brother Herman Friederich who has joined the family business and daughter Johanna.

In 1908 he is sent to Belfast to collect the new Flagship of the company the ss Rotterdam (IV)  and after sailing the ship to Rotterdam remains with her until November. 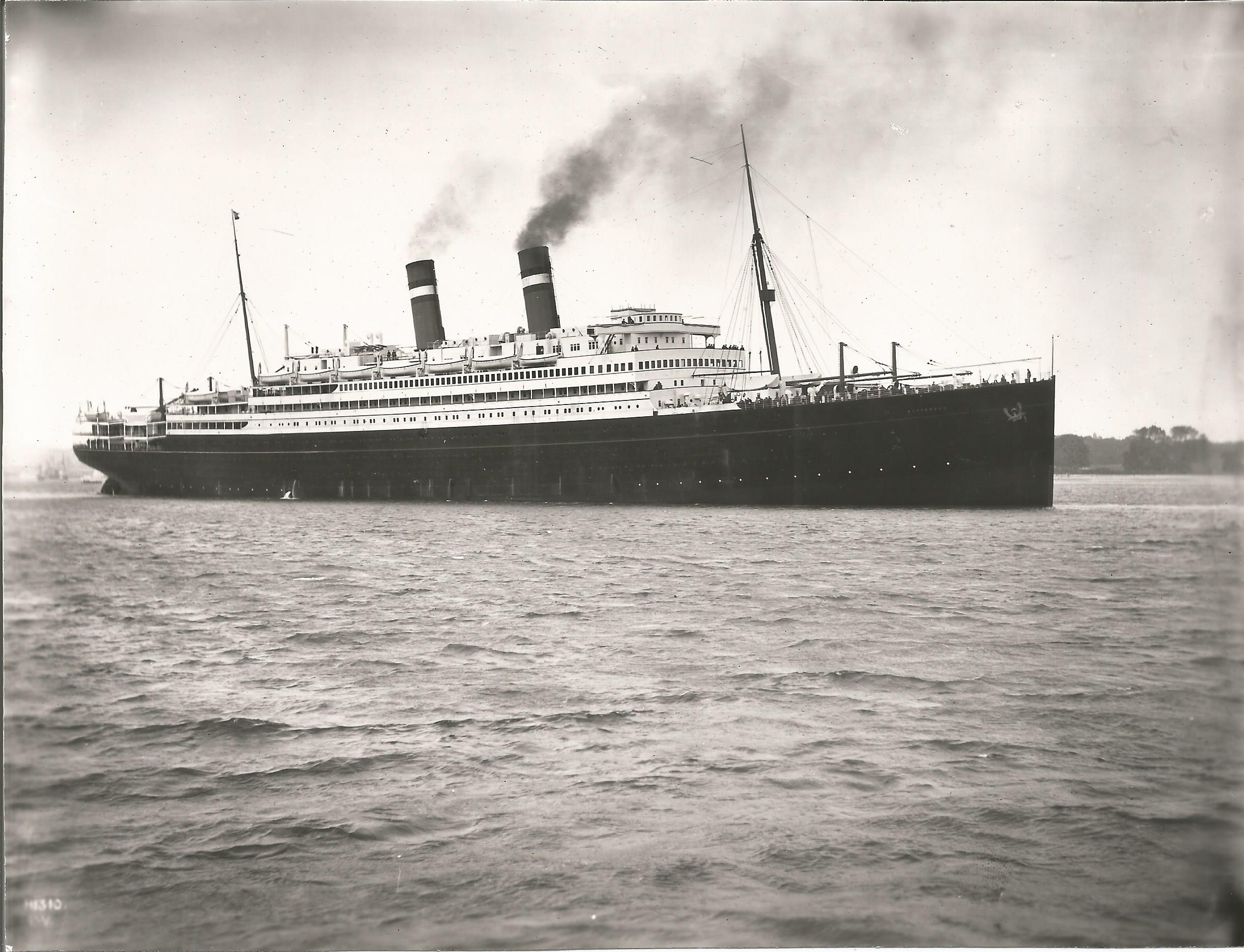 This photo shows the brand new ship sailing from the shipyard when it was delivered so it had Gustav Buhse on board. (Photo Courtesy: Harland & Wolff Shipyard Archives)

The shop Buhse & Fehr survives in family ownership until 1968 when it is taken over by somebody else. The name of the firm still exists and is now located in Amsterdam and well known for clock and jewellery repairs. As they made their own watches and clocks the brand is well sought after by collectors, especially for the early years. 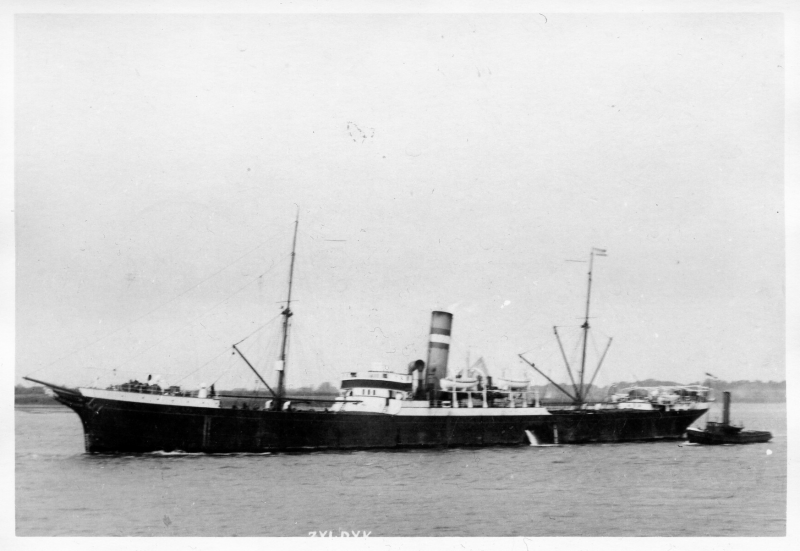 The ss Zijldijk was a very distinctive ship as she was basically a sailing ship with a  steam engine put inside the hull. She had a frigate stern, a bowsprit and a bow figure. It has also been reported that gold scroll work existed at the stern, which was highly unusual for a cargo ship.  Gustav Buhse was  2nd officer on this ship and later on it was his first command. (a)

Gustav goes to sea and subsequently sails on a mixture of passenger ships and cargo ships. On 24 February 1910 he passes the exam for 2nd Officer and is at once promoted. In 1912 he obtains his First Mate ticket (captain’s license) and is promoted the following year. It will take another 10 years before he is promoted to Captain. Not strange, as one has to understand that in the early 20’s the company was not doing very well and several ships were regularly in layup.  Six months after his last exam he marries Diewertje “Dina” van der Horst, born in Schagen (just south of Den Helder) and they settle down in Rotterdam.

There is no mention of children in any of the records but there seem to have been a dead born baby girl on 10 January 1921.

While Chief Officer on the Gorredijk he is part of the peculiar episode in the company when the United State seized all the foreign ships in American ports in March 1918. This includes the Holland America Line ships except the ss Nieuw Amsterdam (I). The USA needs transport to bring its troops to Flanders Fields and under “the Right Angery” it takes all the non US tonnage available. As the Netherlands were neutral in this conflict, the officers and crew cannot sail the ships for the American Government and thus everybody is sent home with the ss Nieuw Amsterdam in April 1918. Buhse is not too much affected as shortly after he is back at sea on board the ss Andijk (I).

Then in 1924 he is promoted to captain and assigned to the ss Zijldijk. Following the company ”pecking order” routine he is assigned to one of the older ships first and is then given by seniority a newer and newer ship. In November 1925 he is appointed to the ss Vechtdijk which sails on the New York to the British Indies which is a yearlong assignment and he eventually returns in December 1926. After that he is given command of cargo ships on the North Atlantic which are not longer away then a month or two months.

By 1930 he has gained enough seniority to be appointed to the passenger ships and this happens in November when he gains command of the ss Edam (IV) this was a one of a class of four passengers – cargo ships built for the Europe – Cuba – Gulf of Mexico service.  For this purpose he was transferred from the ss Binnendijk. 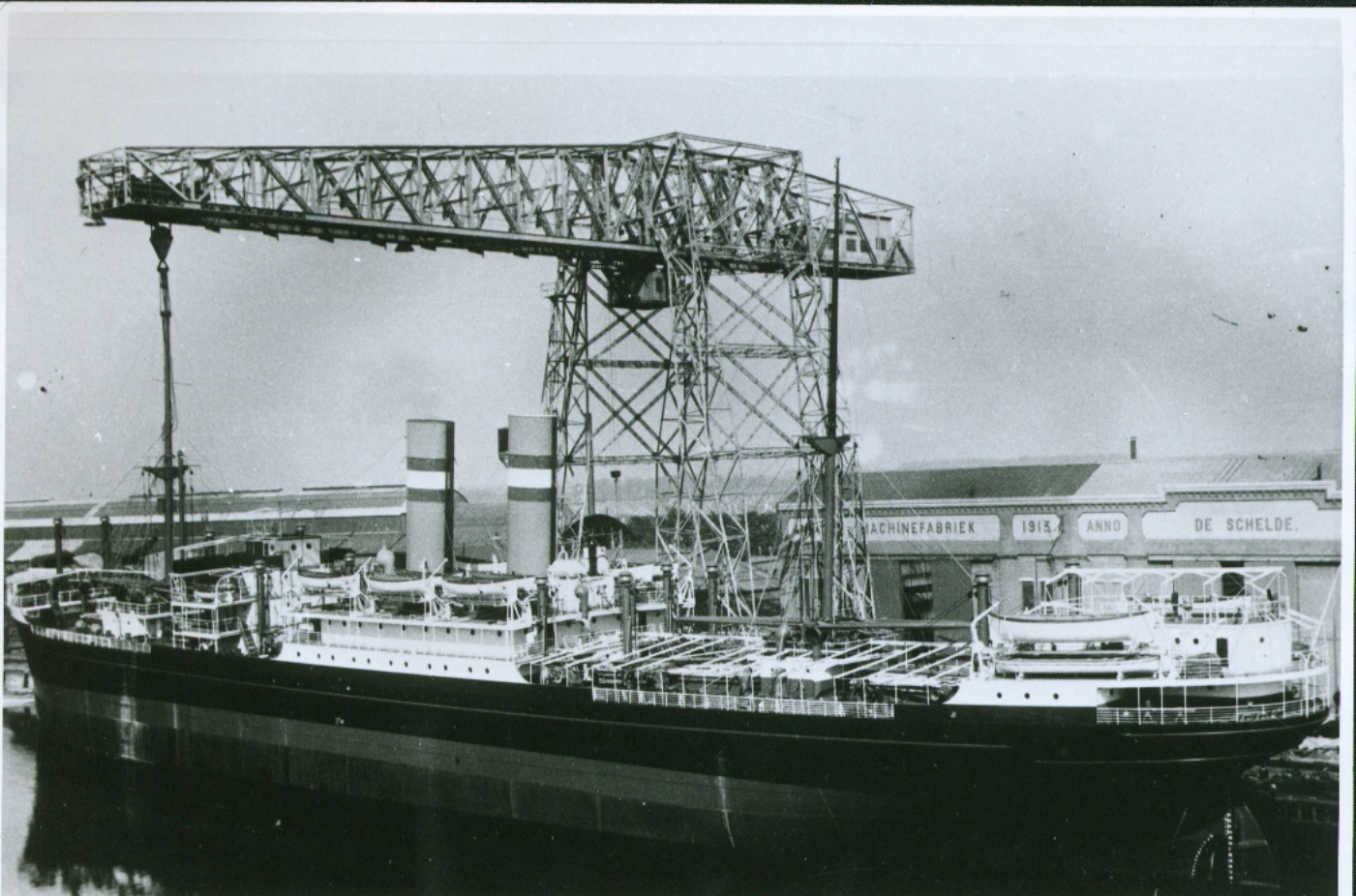 The ss Edam (II) as at the building yard in 1921. This is the way Captain Buhse would have seen the ship; with two funnels. In 1935 the second (dummy) funnel was removed when her passenger capacity was reduced. (a)

On the Binnendijk he had been involved in a cargo fire while docked in Philadelphia.  This fire generated quite a bit of publicity as the statements of Captain and company differed very much of what was reported in the local American newspapers. The Americans advised that local fire crews had been battling the fire for 12 hours, that 25 hose handlers had been overcome by smoke, and that the damage was estimated to be around 1.250.000 Dutch guilders. The company version was that the ship’s crew had been successfully battling the fire until the local fire brigade arrived and then pumped so much water into the cargo hold that the ship went aground. The Board of Inquiry reviewed the occurrence with Captain Buhse present as a witness. Now it became apparent that the fire went from Hold II to Hold I and in order to stop the spreading of the fire, it had been thought best to pump hold II full of water. This caused the ship to list and then it touched bottom. The cause of the fire could not be established as there was supervision by a ships officer and the long shore gangs employed were all black people who according to the captain did not smoke in principle. Hence it was assumed that the cargo had started to smoulder and when the cargo hatches were opened self combustion occurred.

At the same time the depression started to bite and the company had to let go various officers and crew. While most Dutch company’s opted for the rotation model, everybody got the chance to do a few months a year, Holland America followed the American model and dismissed a large number and those who remained sailed full time.  The selection process that was followed was a. seniority b. less seniority but having a family with children, c. married but no children d. not married.  On his level Captain Buhse fell in category c. and was advised that he would be made redundant on 01 April 1932 when his “on standby” period lapsed. Together with the other Captains who were let go, he visited the Head Office in January 1932 for what we assume final arrangements. It is unknown how long the “standby money” was paid after his redundancy.

A family photo album indicates that by 1935 he was living  in Bergen Noord Holland, in a house called “De Ark” not too far from Den Helder.

And then the story stops as it is unknown where he went from there. He was 45 years old so another job is more then likely. But Where and What ???

SO I AM HOPING THAT SOMEBODY CAN FILL IN THE GAPS.

In September 1953 there is an announcement in the local newspaper that his wife had passed away. 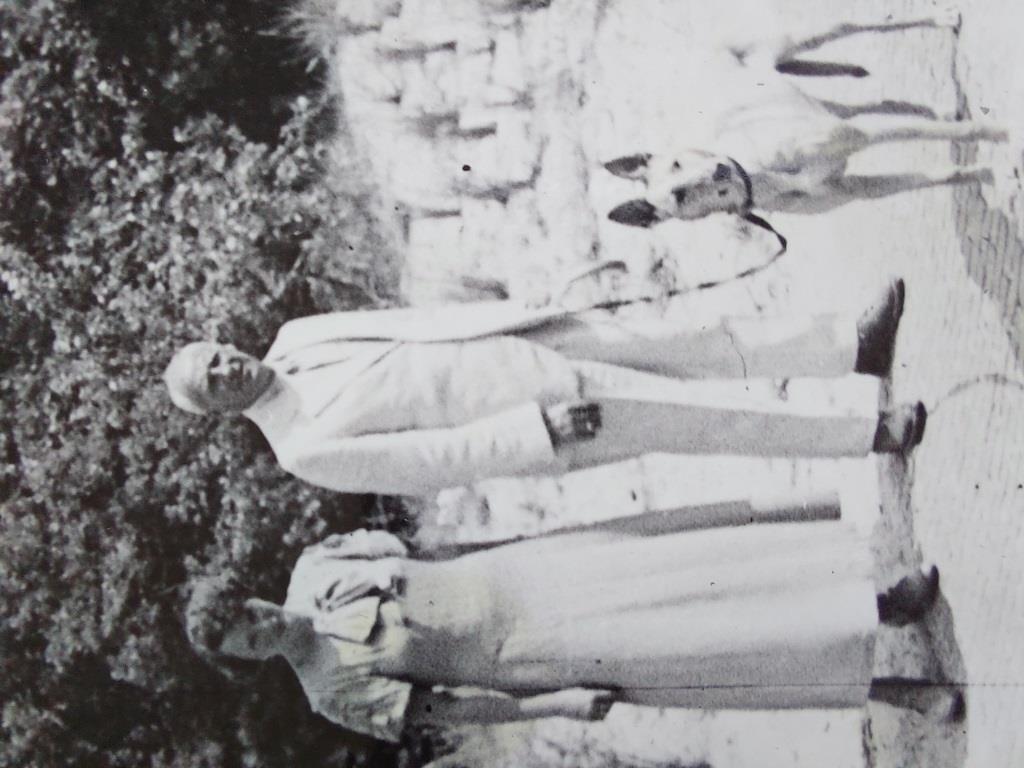 Sometime later in life he marries  a Mrs. M.C Brandt as she is noted as his wife when it is announced that Captain Gustav Buhse had passed away on 24 July 1965.

In retirement the captain must have kept his love for the sea as there the photo in a family album that he made a model of a sailing ship which looks of very good quality and that is not easy to do as a one off, 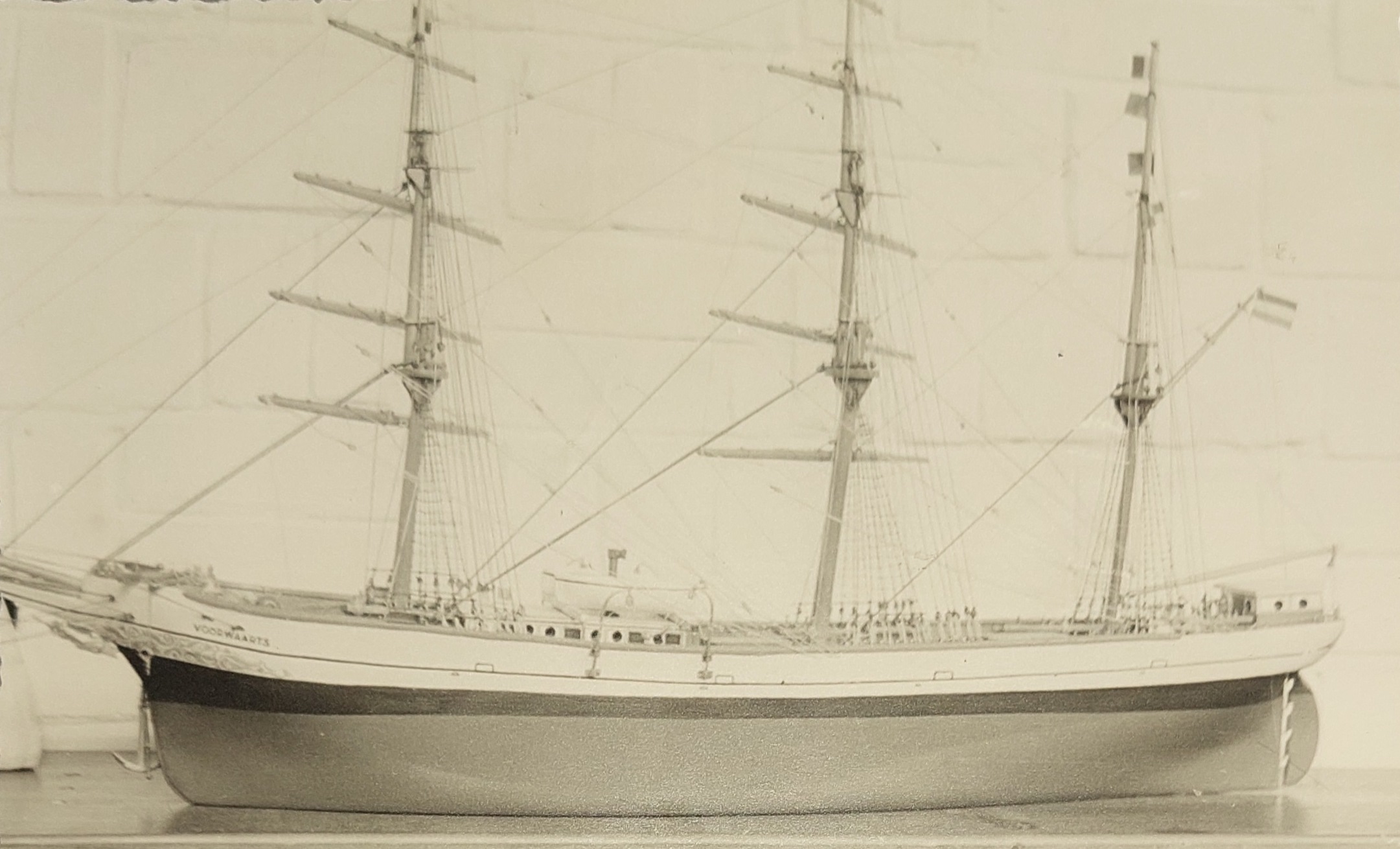 The last three assignments were used to study for 2nd mates ticket.

Transferred in the States due to Capt. Lieuwen staying behind in Baltimore.(broken leg)

And put on 70% standby money