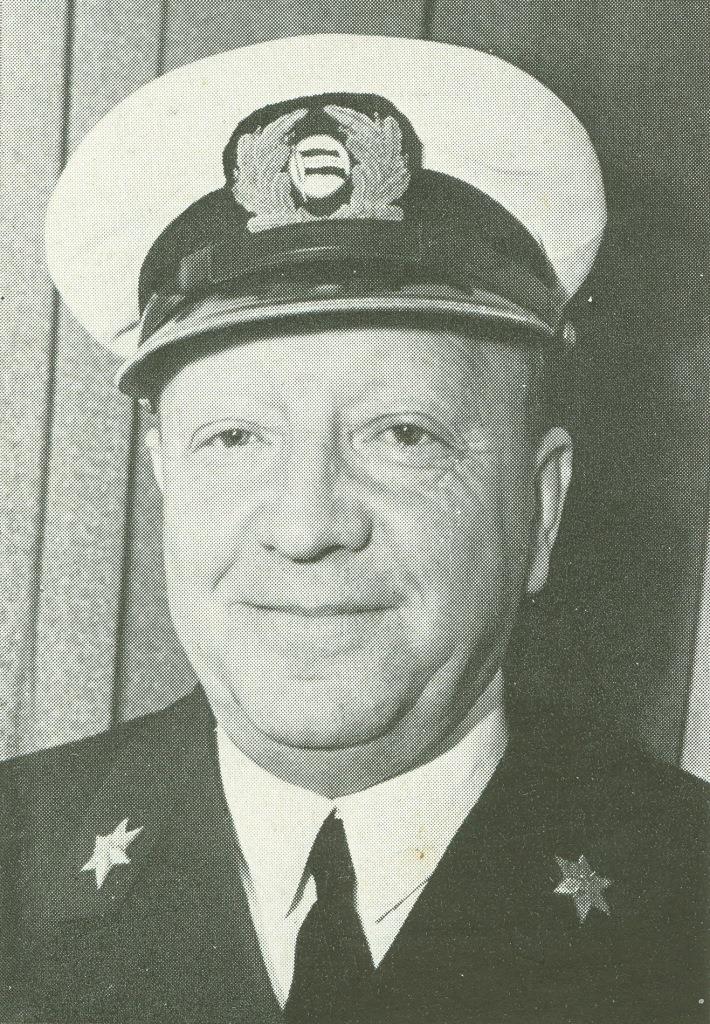 Captain Johan van Dulken This is a 1939 company photo. (a)

Johan van Dulken was born on 09 August 1882 at Rotterdam as the son of Hendrik Pieter van Dulken (of profession Haulier) and Johanna Elizabeth van Os.

It is assumed that he attended the Maritime School in Rotterdam but this can not be verified as no records of this school survived from before 1936.

Upon completion he joins the Holland America Line as Cadet on 01 August 1899 and is placed on board the ss Rotterdam (III) a ship which had just been superseded as the flag ship of the company by the ss Statendam (I) of 1898. While most cadets served on at least 2 ships, Van Dulken remained for the full year assigned to the ss Rotterdam (III). 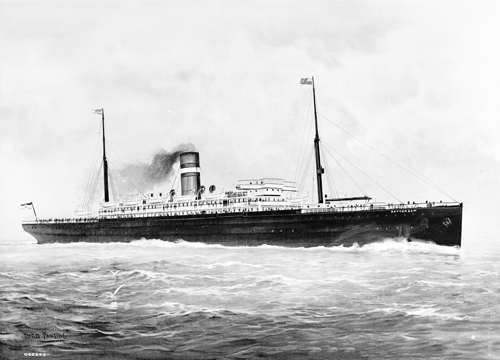 The ss Rotterdam (III) of 1897. There are only 5 or 6 photos known of the ship but the company also had artists commissioned. This is a painting by Mr. Fred Pansing of New York, who later would design a whole series of company postcards.

After obtaining his 3rd mates license he returns to the company and is placed on board the ss Maasdam one of the older units of the company. He remained on the passenger ships until he made captain in 1912, when in accordance with the company seniority system he was assigned as the youngest captain to the oldest / smallest ship. And indeed he is assigned to the ss Soestdijk (I) which was the first – cargo only – ship built for the company in 1900.

He married on 06 July 1909 in Paris Ida Istace (Born on 06 Dec. 1885 at Brussel) Her father was French Belgium and her mother Dutch but they lived in Paris.

Eventually there were 3 sons: 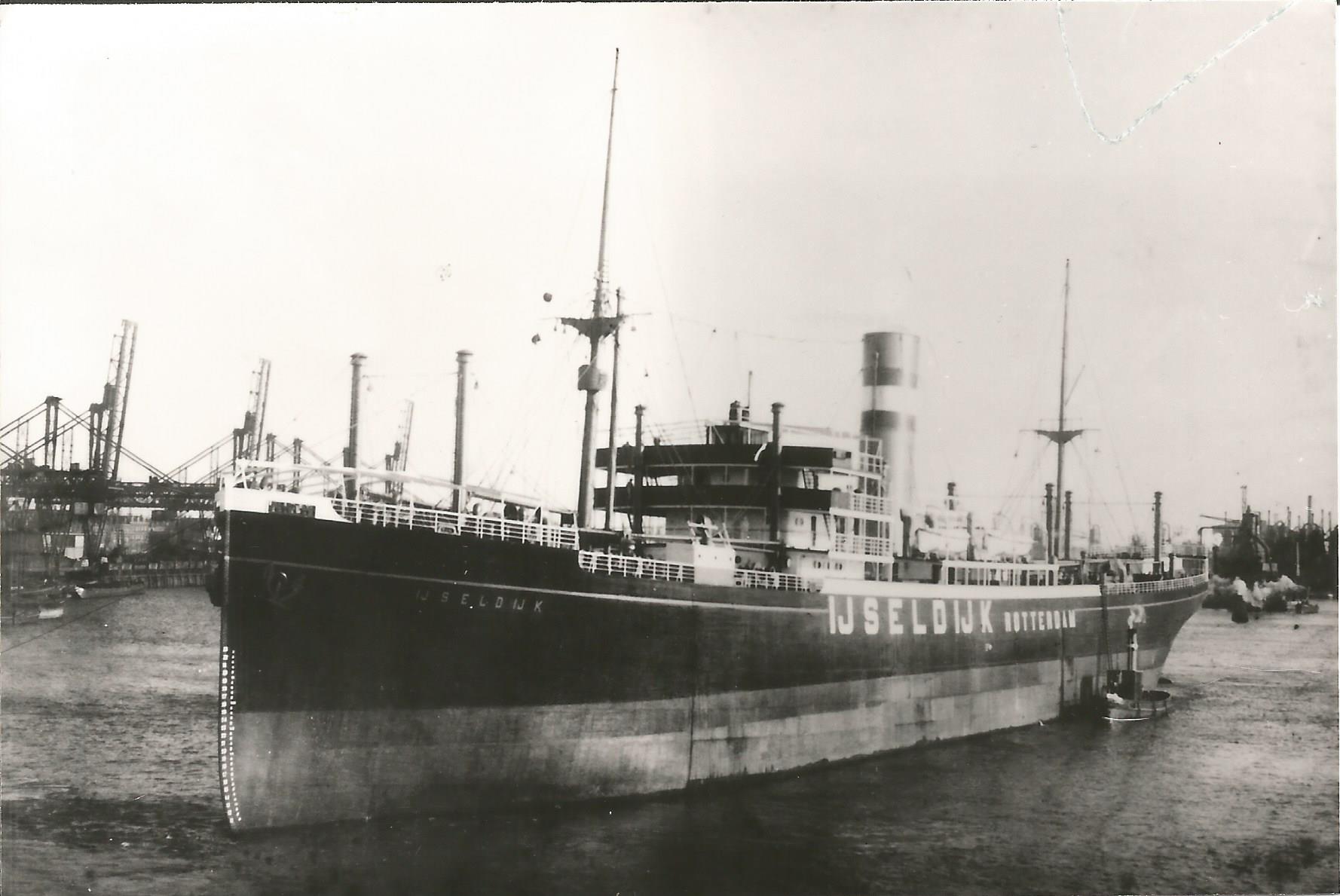 The ss IJseldijk of 1916. Built in the Netherlands she wold eventually be transferred to United Steam (VNS)  a new company in which HAL participated. In 1926 she was taken over by the VNS and renamed in IJselkerk. This photo is from the first world war period as the neutral lettering can be seen on the sides so it must have had Captain van Dulken on board.

In 1916 he is assigned to a brand new ship, the ss IJseldijk, named after one of the rivers in the East of the Netherlands. Built in the Netherlands it commenced its maiden voyage on 02 December 1916. In December 1917 she was put on the East Indies Line of the company which ran from New York to the Dutch and British Far East (Singapore etc.) This was a long route service and each HAL officer was sent onto this service eventually which meant being away from home for a year. This was the routine in peace time. However World War 1 was going on and by 1918 hardly any ships still returned to Rotterdam who could have taken Van Dulken on board. As a result he left Rotterdam on 17 March 1917, had a period up of lay up in New York due to the U boat danger on the North Atlantic and was then assigned to the Far East service. He was finally relieved in New York on 21 March 1919 and then sailed home with the Rotterdam (IV). Just over 2 years away.

He then received two months vacation and is then assigned to the next cargo ship. In 1923 and 1924 he is asked to sail as 2nd Captain on board the ss Rotterdam (IV) for the long cruise to the Holy Land from New York. Before that he had made one voyage as captain in November 1923 on the same ship to bridge  the gap between the old Commodore and the new one. Contrary to the North Atlantic service, on cruises the captains were expected to socialize a lot more and hence a “2nd captain” was very useful. 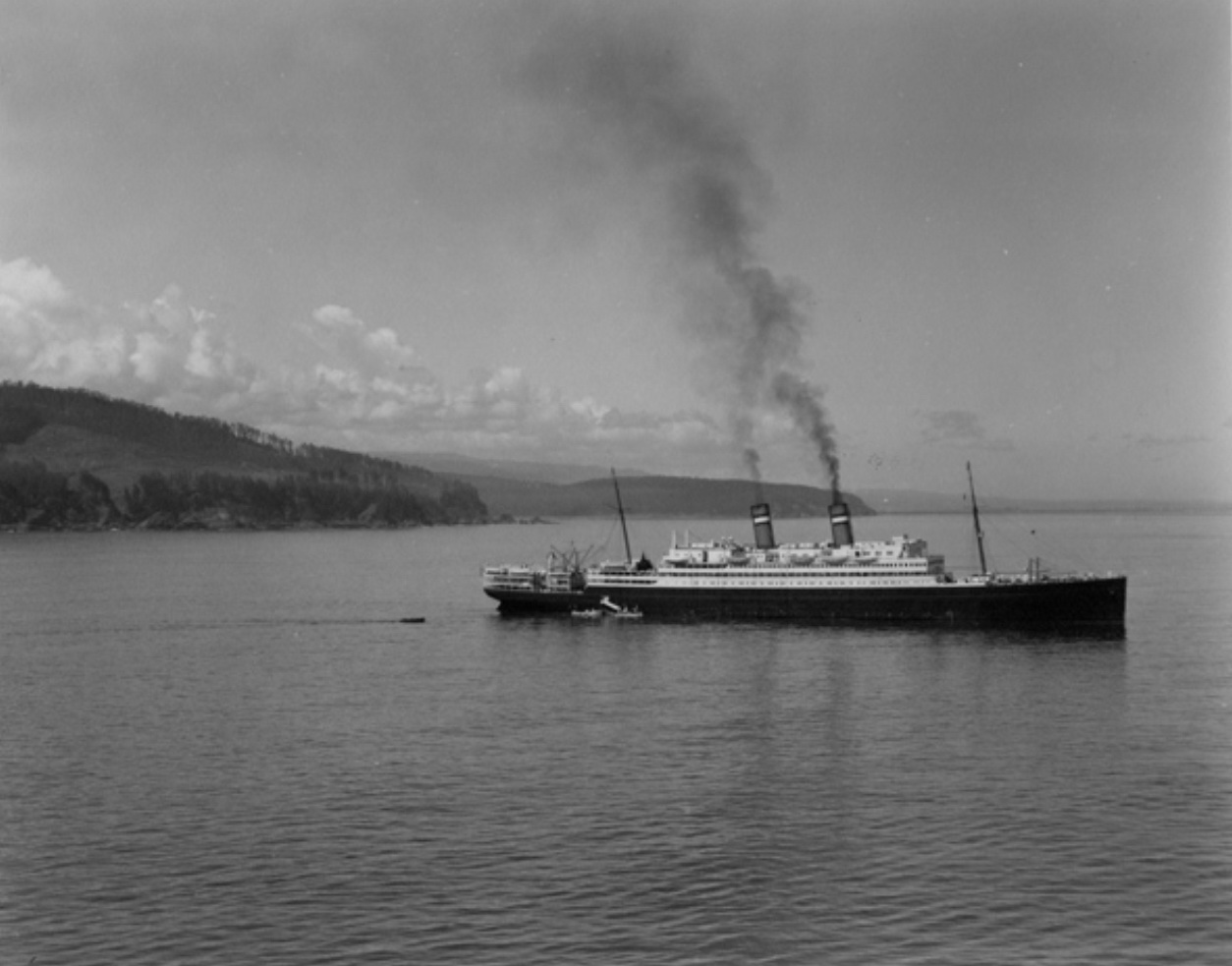 The ss Rotterdam (IV) at anchor in a European port during one of her long cruises.

In between there is a voyage on the Moerdijk (I) from Rotterdam to Vancouver. Holland America had begun this North Pacific service with some ships that had cool and freeze capacity. The service was maintained with a mixture of cargo only ships such as the Moerdijk and cargo ships with an enlarged passenger capacity (up to 100 passengers). In August 1924 he makes one voyage on such a ship the ss Dinteldijk (I).

Then it is back to the passengerships,

Bronze Cross with commendation (08 may 1942) later retracted and upgraded to the Bronze Lion. (Sinking Pennland)

Received the Distinguished Service Cross (British DSC) on 01 august 1943 for the leadership shown during the attack and sinking of the ss Pennland while evacuating troops from Greece and assisting the British Royal Navy.

While in command of the ss Moerdijk (I) he has a collision with the english steamer ss Cito while homebound for Rotterdam (arrival 01 Nov.). The ship sustains several damage on the starboard stern at hatch no 7. The Cito continues to London with damage to the anchor hawse pipe and goes into dry dock.

While in command of the ss Leerdam, bound for Havana)  the ship runs aground on 06 July 1929 on St. George Isle (Sao Jorge) in the Azores. The 150 were taken ashore but later reboarded when it became clear the ship was still sound. It then sailed to Fayal in the Azores . Some tanks were reported leaking and as repairs could not be made in Horta the ship returns to Vigo in Spain. The passengers remain in Horta and are then picked up by the ss Spaarndam on July 16. The ss Leerdam is subsequently found to be in good enough condition to sail to Rotterdam (arrival 18 July)

In 1946 he is part of a group of people who created Nevas (Netherlands Society for the adoption of ships) with the idea that schools in The Netherlands should adopt a Dutch merchant ship and in that way create and keep interest in the Dutch Mercantile Marine. (The NEVAS was active until at least 1972) He was appointed Vice chairman and shortly after Chairman. This then takes up all his free time in retirement. For the many years of hard work in promoting the Dutch Merchant Ships and companies  he is awarded the “De Ruyter Medal” on the 22nd of March 1952 . Which is the highest honour in the Dutch Shipping Industry.

Passed away on 03 September 1972 in the town of De Bilt in the central Netherlands. He was survived by his wif, his three children, grand children and great grand children.

Starting 18 Jan. 1936 suspended for one month by the “Raad voor de Scheepvaart” (Maritime Board of Inquiry) due to stranding of the ss Rotterdam on one of the Morant Cays on 30 Sept. 1935.

End of available archives. The company went to a different administrative system in 1937 and those records are under lock with the Merchant Navy pension fund. (e)

From the Movement books:

Sails home on the US transporter ss Evangeline

(a) Photos from authors collection. If the original source is known, then this mentioned under the photo.

(d) Stamboek from the HR records of the HAL archives as held by the Municipal Archives of the City of Rotterdam.

(e) Movement books from the Directors Archive of the HAL archives as held by the Municipal Archives o the City of Rotterdam.