Captain Levinus Johannes Hertogs was born on 04 November 1896 in Middelburg, the Netherlands. His call name seems to have been “Leo”.

I have not been able to obtain much personal information about him yet.  Also the company information is very sparse as the personnel records are kept by the Company Pension Fund and they do not want to share.

So what I know if listed below.  Anybody who can help with completing his biography please contact me on this email address:

From the records of the “Kweekschool voor de Zeevaart” the Maritime Academy in Amsterdam we know that his father was called Aarnout Hertogs, occupation Furniture Maker / Upholsterer and his mother was called Adriana Wesdorp. They lived in Middelburg in the province of Zeeland.

We do not know why he choose to go to sea. And not also why he choose for Amsterdam as there was a Maritime School in Vlissingen (Flushing about 20 minutes away) and one in Rotterdam, an hour away by train. Amsterdam was at least 2 hrs. measured by modern transport times.

He was accepted at the school on 09 September 1914 and was for his time a fairly tall person with a length of 177 centimetres. He joined the two year course and was ready for sea by June 1917. He was the only candidate who scored twice a 10 (maximum marks under the Dutch marking system) for Weapon handling (Floret and shooting)  (ED: Something I have not seen on any other school reports so far)

He joined Holland America on 14 July 1916 as cadet on board the ss Waaldijk (Capt. Kok) employed on the North Atlantic service. He returns to school on 19 June 1917 after completing his one year at sea and submits a very good attest of behaviour. But he can not go for his 3rd mates exam as he is drafted into the Military until December 1918.

The company pays him standby money from 25 December 1918 onwards so he can return to school to refresh his knowledge. On 19 March 1919 he passes his exam for 3rd officer.  He is then dismissed on 05 April 1919 from the Academy with good marks and reports.

His cadet year was peculiar so far that he only sailed on one ship and only made one voyage which lasted a whole year. Most of his fellow cadets had at least two ships, and if assigned to the passenger ships made much shorter voyages.

He then returns to Holland America and is assigned as 4th. Officer to the ss Rotterdam (IV) on administrative wages.   The company used to do this on occasion when an officer was going to get married and the set date interfered with the sailing schedule, or when a child was due.

While having the rank of 3rd officer he married on 08 Jan. 1923 at Vlissingen (Flushing) with  Susanna Johanna Tiggelman  Born on 10 Sep. 1902 at Vlissingen as the daughter of Jan Tiggelman (Sea pilot) and  Carolina Elisabeth van der Schaft. (c)

The next thing of interest is the arrival of the B class ships where he spent a considerable amount of time sailing on. This series of cargo ships were the result of 60,000 tons of steel given to the HAL by the British Government for the sinking of the Statendam (II). He was under construction at Belfast when the war broke out and completed as  the troop ship ss Justicia. In 1927 she was torpedoed while sailing empty.   Compensation then came by means of steel and a number of engine turbine sets. 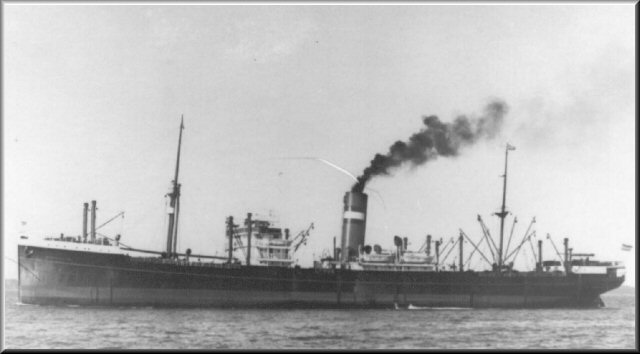 The cargo ship ss Bilderdijk (I) (a)

The B Class freighters were built in Holland and then towed back to Harland & Wolff at Belfast for the installation of the propulsion system. When completed a Holland America Line crew was sent over to collect the ship and sail it back to Rotterdam.   3rd Officer Hertogs joined the ss Binnendijk on December 12, 1921. Trials were conducted on the 15th. December and then the ship was taken over.  Captain Cornelis Gerard Stuffers then assumed command of the ship and sailed her to Rotterdam where she arrived on December 18. On 24 December it departs for her first voyage to New York and is back in Rotterdam on 03 Feb. 1922.  Twelve days later he joins the ss Maasdam (III). 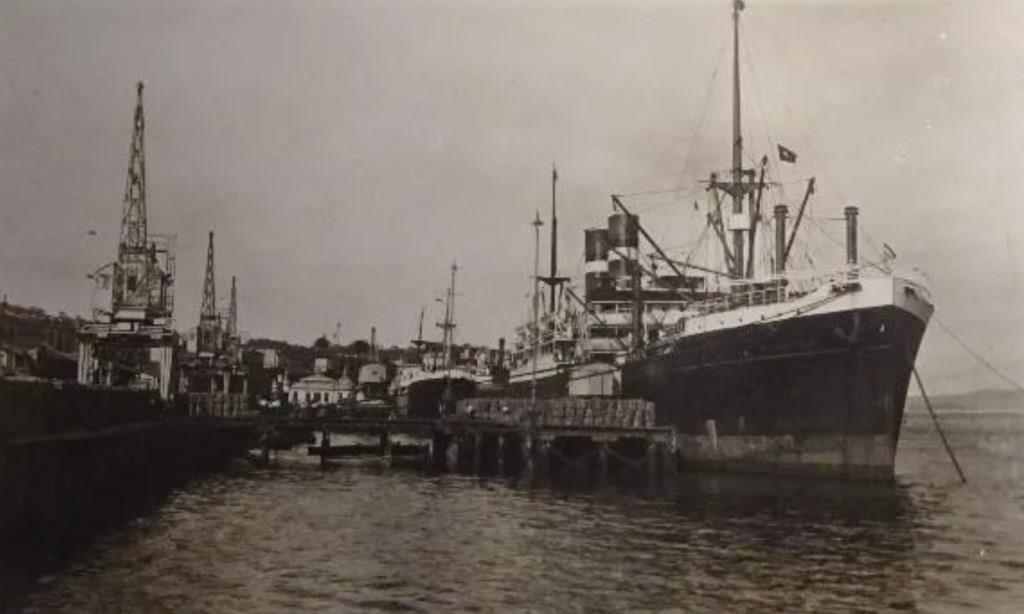 The ss Maasdam (III) docked at Santander in Spain, early in her career. The portside anchor chain is in the water to help pull the bow of the dock on departure, thus saving the use of a tugboat. (a)

This ship was just under a year old and part of a series of newbuilds called the Edam class and designed for the service to Cuba and the Gulf ports. The route wold call at the Northern Spanish port and Portugal, especially to embark part time laborers for the sugarcane harvest  in Cuba , and then stop at Havana and the various American and Mexican ports around the Gulf of Mexico.

There is still a considerable gap in his records between 1922 to 1940 which needs more research. 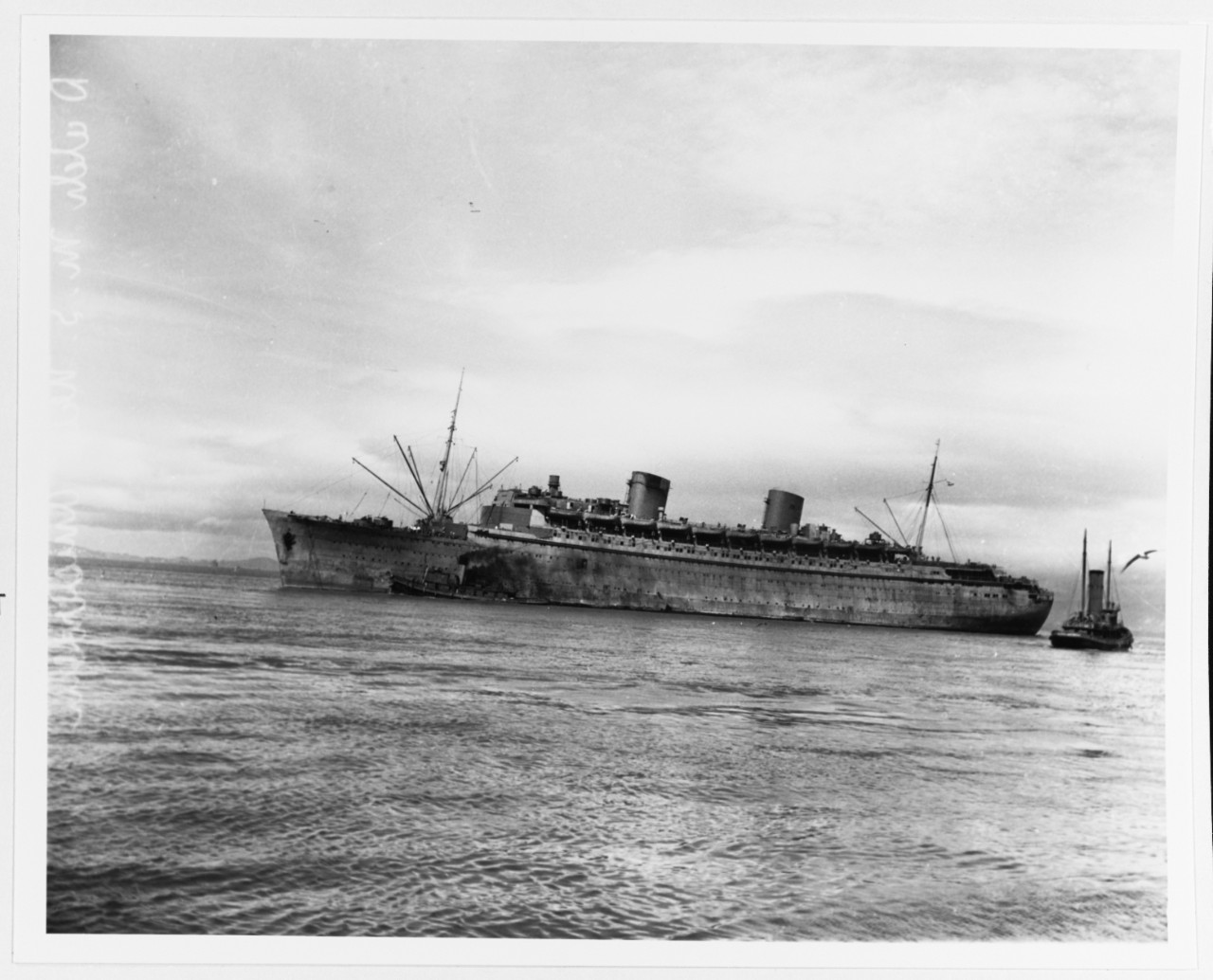 This photo of the ss Nieuw Amsterdam was taken after October 1943 near San Francisco so most likely with Chief Officer Hertogs on Board. (a)

But by 1940 he is now Chief Officer and one of the most senior as well as per the companies  seniority system ship hopping system he ends up in October 1943 as chief Officer / Staff Captain on the Nieuw Amsterdam. Sailing for awhile on the flagship normally indicted that the next step was promotion to Captain whereby normally you would then start at the bottom of the (captains) ladder again by sailing on the smallest or oldest ship.

This sort of happened as well to Captain Hertogs as he was assigned to the “Van Der Capelle ” which was a liberty type cargo ship (but built in the UK) owned by the Dutch Government and given into charter where tonnage was needed. The Holland America Line received this ship as compensation for lost tonnage. The ship was named after a Dutch painter of the 17th. Century. In remained in the fleet until 1946. Subject to confirmation,  Captain Hertogs remained in command of her for this whole period. 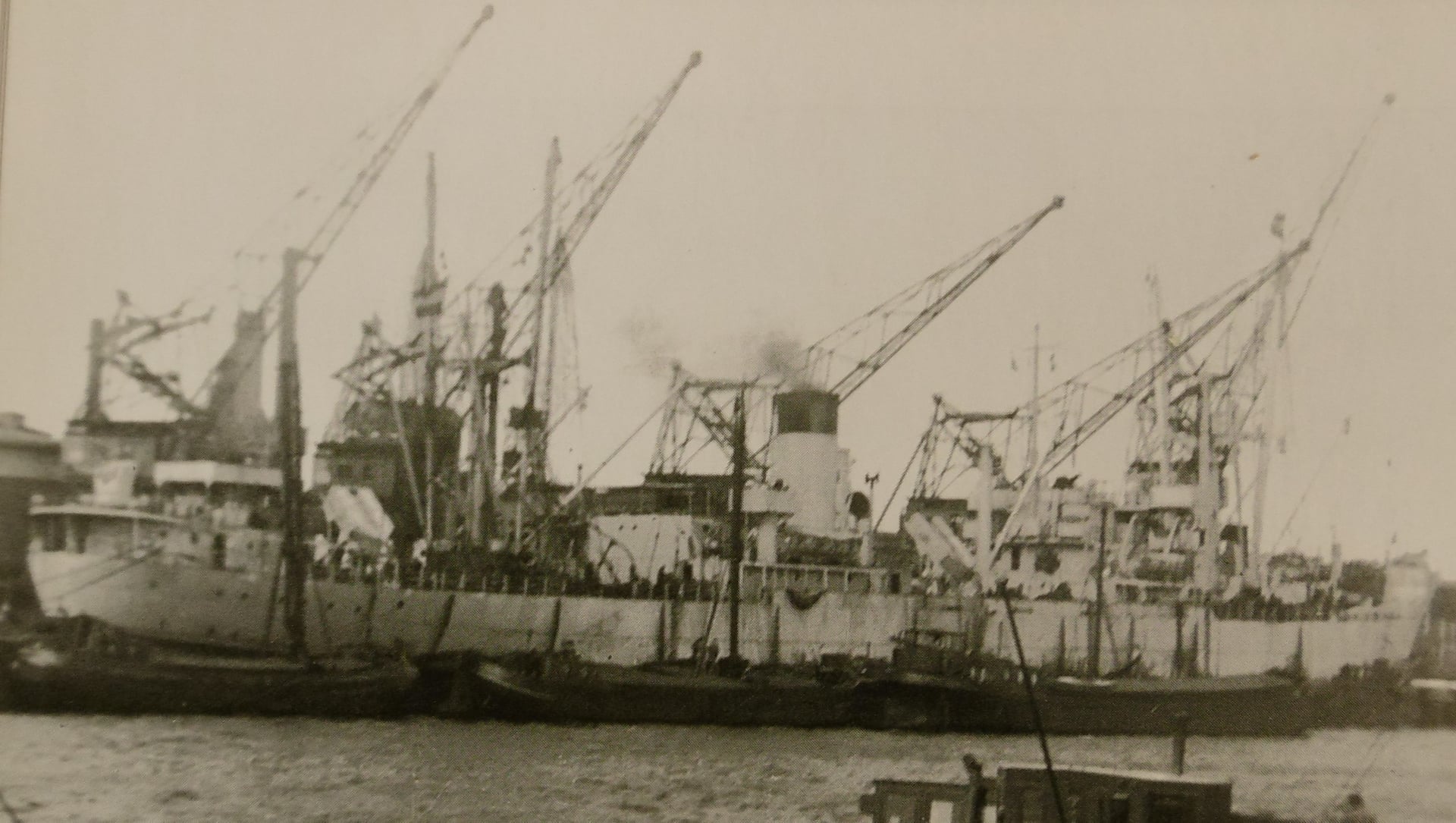 The ss Van Der Capelle. A Liberty ship, still burning coal and sailing with a maximum speed of 10 knots. Being Government owned she never had the had colours. (a)

Although not the most glamourous ship to sail on, he did make history with the his as on  22 May 1945 the ship was the first Dutch flagged ship to enter the Netherlands after the liberation of the country.  carrying Palm pits and  peanuts. Getting into Rotterdam was quite tricky as the Nieuwe Waterweg leading into Rotterdam ws still littered with ships sunk by the Nazi’s to hamper the Allied invasion. (which never came as the landings were carried out in Normandy)

This was ofcourse an important event and the next day the whole crew was invited to come to City Hall  to be received by the Burgomaster of Rotterdam and a whole bevy of other important people.  There is an anecdote about this meeting indicating that the Officers and Crew were not that charmed about the (compulsory) invitation as none of them had seen their family for 5 long years so they had much preferred to be at home. Also the ship only stayed in Rotterdam for  10 day and then sailed again for New York. “As one crewmember said “bunch of peacocks and not even a glass of beer was offered”. 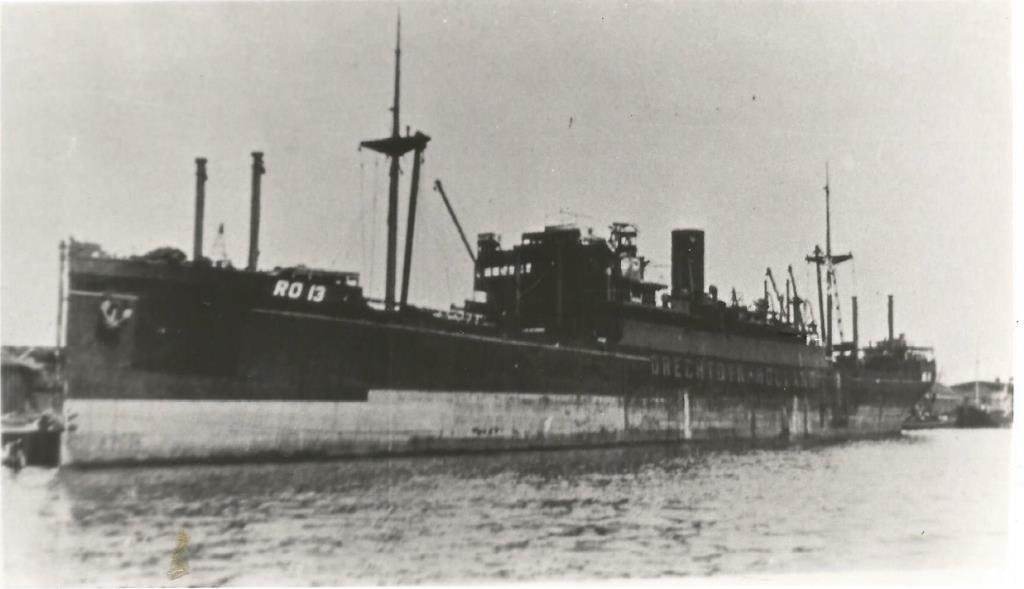 The ms Drechtdyk in bad condition in Germany with the pennant nbr. RO 13 under the name Russelheim. (a)

In 1945  he had a short but interesting experience as he was sent on 05 Dec.  to Germany to collect the ms Drechtdyk. The ship built in the 1920’s for the North Pacific service had not been able to get out of Rotterdam on time when the invasion came and was transferred to Germany and used for cargo transports in German controlled waters. In Feb /March she is repeatedly hit during air raids on the port of Kiel and burns out. After the liberation the hulk is found back at Brunsbuttel near the entrance of the Kieler Kanal. He had travelled there wtih the Dutch Tug “Zwarte Zee” which now also towed the hull back to Rotterdam under the captains supervision. It arrives back in the homeport on 24 December.

The company now started on an aggressive program of fleet expansion to replace lost tonnage  and at the same time eyes a route expansion, which indeed came about when a joint service to South America was opened. 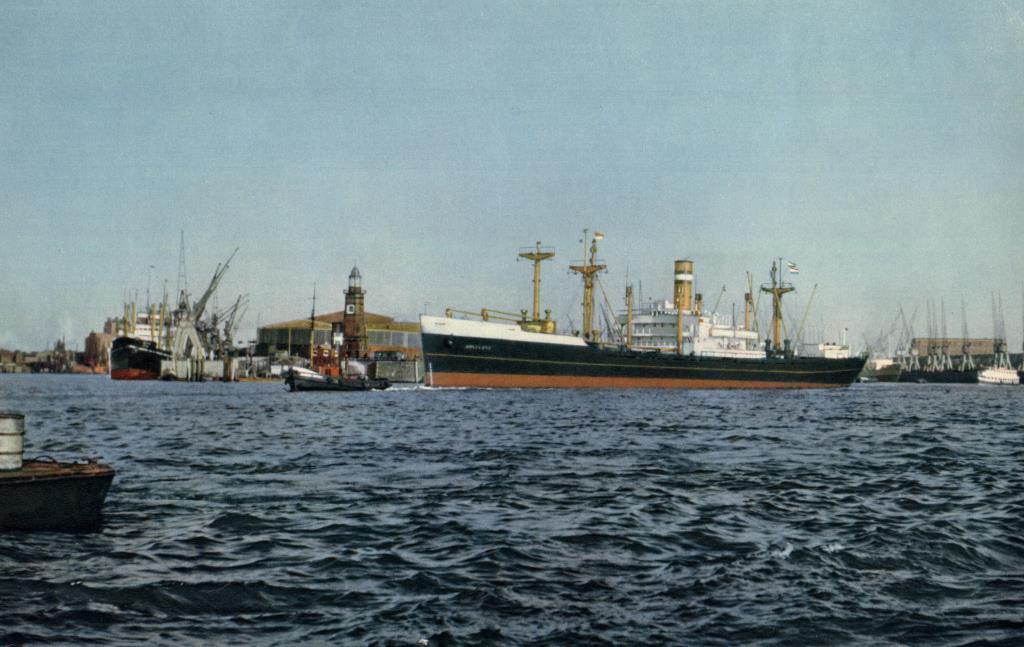 The ss Axeldyk, one of the 10 A class ship the company bought. With an average speed of 16 knots they were ideal cargo ships for a regular liner service. (a)

So in March 1947 he is dispatched with a complete crew to San Francisco to collect the Victory ss Colby Victory which had been bought by the Holland America Line. The crew sailed with the ss Westerdam to New York and from there by train across the USA. Upon handover the ship was renamed in ss Axeldyk and departed on 07 April from San Francisco,  calling at various ports on the West coast for cargo and then sailing home to Rotterdam from the Panama Canal. He would remain on this ship for 3 years, mainly sailing to the east coast ports north of New York.

Captain Hertogs passed away on  19 March 1968 after 11 years of retirement.

(a) Photos are from the Albert Schoonderbeek collection unless indicated differently

ED: (*) This means assigned to the ship but did not sail on her.

Returns to NY via Boston per ss Curacao

Joins in in Philadelphia

Must have retired around this time as  he started his career on 16 July 1916 which is 40 years with the company and would have been due for age related retirement on 04 November 1956.