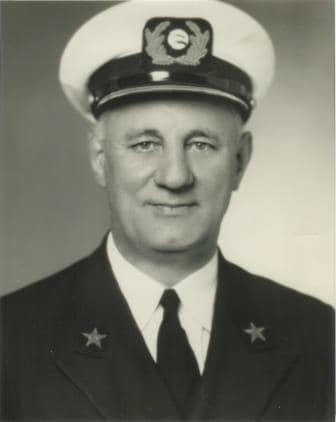 Captain Scriwanek (First names Leonardus, Marinus, Johannes) was born in Rotterdam on 10 July 1891.His father worked as an administrator for an Import Company called: H.HL Hartog & Fesel. (a)

The name Scriwanek is not Dutch but originates from Bohemia an area located near the South East German border. His Forefather Johann Baptist Scriwanek came from there and was a musician who played the Oboe. Around 1790 he arrived in the Netherlands and stayed. Most of the family has been Musicians or Military since that date. Most remained in the Netherlands but some went to France and Switzerland. (b)

However Capt. Scriwanek decided to go to sea and sailed one year as a Sailor O.S (Ordinary Sailor, which means not yet skilled) with the Holland America Line and then went to the Maritime Academy in Amsterdam for his 3rd mates license. He passed the exam on 29 March 1911. For reasons unknown, he did not return directly to the Holland America Line but first sailed between Aug. 1911 to Mar. 1913 for the Kon. West. Indische Mail as 4th and 3rd officer. The KWIM was a company which sailed from Amsterdam to the Caribbean Sea. (a)

He was then called for his national service for six months and served with the Royal Navy until 25 Oct.  1913. After discharge he applied with Holland America and was accepted as 3rd officer on 8 Dec. 1913. (a) 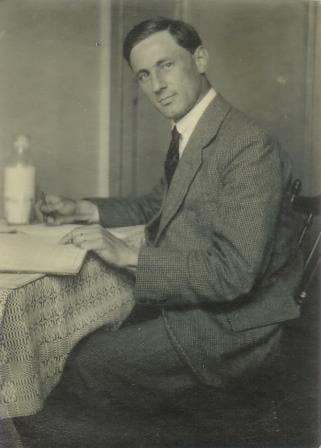 Three childeren were born, Bep, Adele, and a son Wim. (Mr. Edwin van Willigen, mentioned under credits, who provided most of the personal information, was the 2nd son of Adele)

The time line of his career (not yet complete) is listed below. His first appointed as Captain, as a fill in was on 19 Jan. 1927.

Due to the deteriorating world’s economy, the company had to lay up many ships and as a result he was not promoted until the late 1930’s.

Information to be added when the voyages of the 1930’s are transcribed. 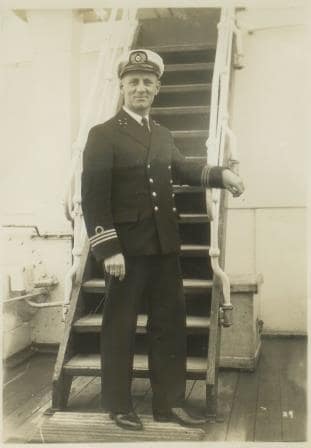 As a result he spent a very long time as a chief officer on the various ships of the company.

This is the winter uniform for ships officers. (c)  The position of chief Officer is denoted by the 4 pips on the lapels and the 3 strips on the arms. The stripes are all around denoting having spent time in the Royal Navy. I have not been able to find any evidence yet of him having had a commission there.

The captain become known to the outside world when he was in command of the cargoship Burgerdyk (see ship section for details) and it was torpedoed. 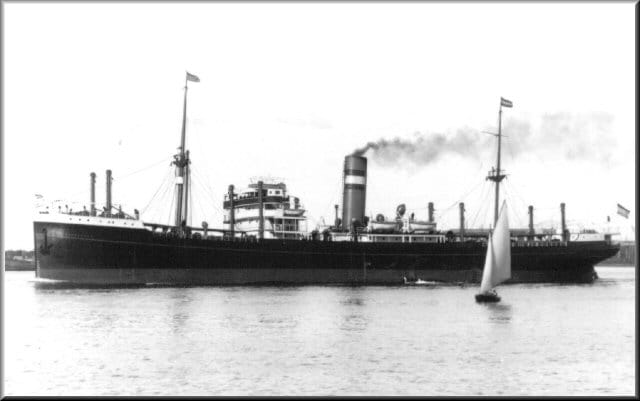 The Burgerdyk had left Rotterdam on 09 Jan. 1940 for a voyage to New York carrying a quantity of gold (approx. worth 5 mln. Guilders) from the Dutch National Bank. With the threat of a war with Germany the DNB had embarked on a program of transferring step by step all the Dutch Gold Reserves to New York and did so mainly on the ships of the Holland America Line. 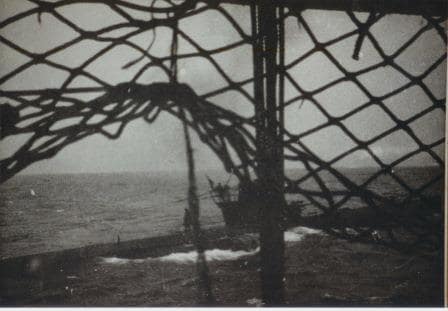 On the way back the ship was stopped on 10 February by the German submarine U 48 (Ltz 1klasse Herbert Schultze). The ship was about 15 miles south of Bishops Rock on the South English coast.

The Burgerdijk was stopped just after 5 pm. ships time for an inspection of the sailing papers and cargo manifests. The Chief Officer was rowed to the Submarine by four sailors. Obviously the commander of the UB 48 did not like what he saw or was not interested and ordered the Burgerdijk to be abandoned in 30 minutes before he would torpedo the ship. 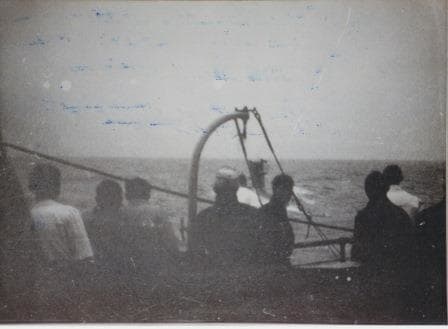 Another view from the Boat deck showing the submarine bouncing on the waves. (b) (c)

The captain advised all on board to grab one bag with belongings and then ordered everybody into the boats. 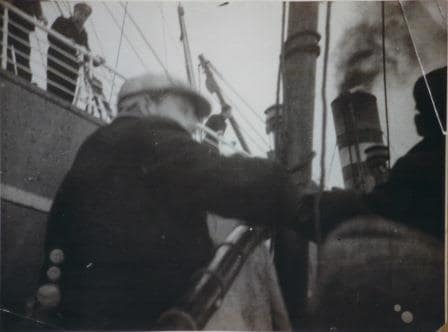 Using the accommodation ladder to embark the Edam from the lifeboats.  (b) (c)

At 18.40 hrs. the Burgerdijk was torpedoed. This was a flagrant violation of the neutrality laws as the Kingdom of the Netherlands was not involved in the war.

Three boats had been lowered and while tied together they drifted on the water of the North Atlantic Ocean during a cold winters night. The next morning around 07.30 a ship appeared on the horizon which turned out to be the Edam (IV) of the Holland America Line. All made it safely on board. 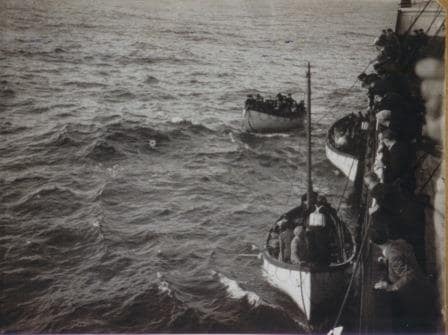 Lifeboats coming alongside the ss Edam (IV) (b) (c)

This ship has left Boston in the USA at the same time but the Burgerdijk had made the faster passage causing the Edam to arrive at the scene only the next morning.

The Edam (IV) continued the voyage towards the British Inspection area at the Downs. Here the whole Burgerdijk crew could transfer to a Passenger Cargo ship of the KNSM (Royal Dutch Boat) the ss Boskoop who landed everybody in Amsterdam on 15 feb. 1940 (c 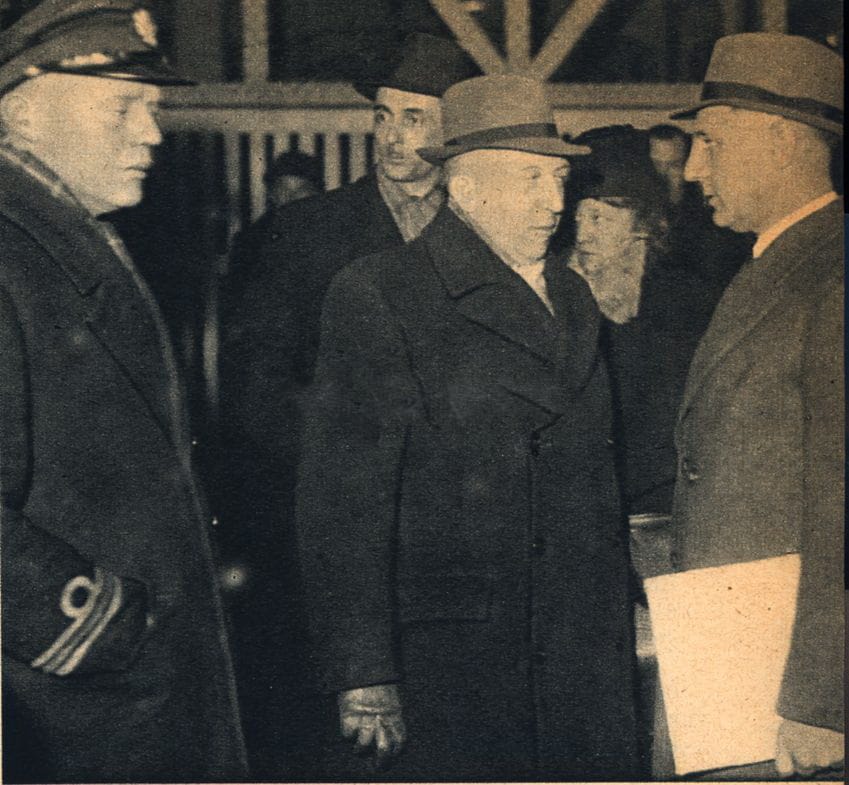 Coming ashore in Amsterdam. (e) From Left to Right: Chief Officer Dijk, the Nautical Inspector of the Hal Mr. Henken and Capt. Scriwanek.

Remainder of the war and post war years history, still to be traced. 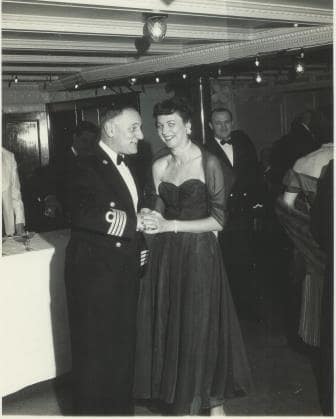 Captains Reception during the voyage

Company regulations required (until recently) that captains retired when reaching their 60th. Birthday.Captain Scriwanek reached that age on 10 July 1951.

After his retirement he moved house from Rotterdam to Driebergen (small hamlet, east of Utrecht) in the centre of the Netherlands. He continued to live there until shortly before his death. He passed away in a nearby hospital in Zeist on 11 Oct. 1982. (b) 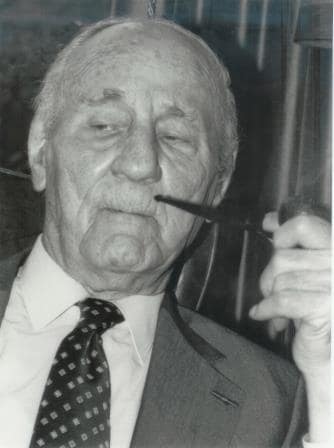 08 may 1917   made available for the military authorities.

Due to the confiscation of the Gorredijk returned to Holland with the ss Nieuw Amsterdam and from 12 apr 1918            Temporary ashore to study for 2nd mates license (on standby money) passed exam on 13 dec. 1918

In charge of the laid up ships

until feb 1939 then Chief Officer  Statendam

To be completed when information becomes available.