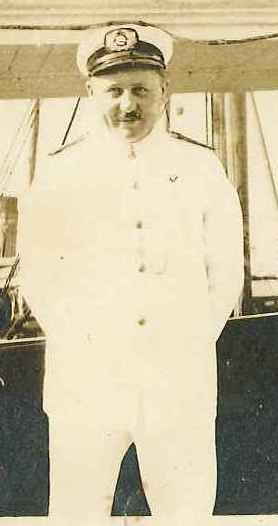 Captain Christoffel Johannes de Kup was born in Amsterdam on 28 July 1886. His father was Gerrit de Kup a local insurance broker and his mother Elizabet van der Made. At that time they lived at the den Texstraat 41 in Amsterdam. Religion: Dutch Reformed.

He entered the local Maritime Academy, “De Kweekschool voor de Zeevaart” on 20 August 1900. He remains here for 3 years.  which means is early education (Especially Mathematics) was not sufficient to be slotted in on a higher level. Then he is taken on by the Holland America Line which had a preference for students from this academy. He returns from his year at sea on 30 of August 1904 with the notation: Very Good. He is then released from the Academy to rejoin Holland America with the notations: Honorable Discharge, with compliments for skills/ability and a very good attest (ED: attest from the company)

(ED:) I think that this is a photo of captain C.J de Kup  taken in the mid 1920’s. The other half shows Chief Officer Stuut and the two sailed together at the time.

He joined  Holland America in 1903 as cadet and was then promoted to captain in 1920. In 1928 he received the silver Medal of the Dutch Royal Meteorological Institute out of appreciation for the quality of the weather observations in the ships and weather journals held on board.

By the time he had gained sufficient seniority for the passenger ships he is made redundant on 01 January 1932  by the company, due to the depression, together with several other captains.  Unknown is why it was him and not somebody else. However it was company policy to let go those junior in rank if they were not married and did not have children. Captain de Kup was not married and did not have children.

Maybe he also had the option to go full time to the Royal Navy  as he was one of the few First Lieutenant in the Reserves and had just attended higher command training at the Navy Academy. The newspapers announced that on 29 October 1937 he was promoted to Captain-Lieutenant of the Royal Navy Reserve. So either he remained sailing (see below) and was still Reserve Officer on the side or he was taken in the Reserve System with a permanent function.

Second option is that he transferred company’s. There is a photo in the Maritime Museum in Amsterdam which is titled Captain C.J de Kup, Commander Rotterdamsche Lloyd. The Lloyd was  also a company which was based in Rotterdam and sailed to the Dutch East Indies. (ED: it is far to say that it would be a very small chance that of having two captains in the Dutch Merchant fleet with exactly the same name and same age) But to be confirmed.

For his Holland America Line time, it is interesting to look at his sailing list (see below). All the regular HAL ships show up caused by the fact of the Holland America system of moving officers around the fleet to bigger or more prominent ships, when gaining seniority in rank.

One thing which stands out on this list and is the fact that he was given on loan to the VNS (United Shipping Company). This was a joint venture of several Dutch Shipping company’s founded with the aim of providing a service to Africa and the Far East (India and China) because none of the participants had an established liner service there. The company always referred to it as the Holland British India Line. The participating company’s all brought in several ships and also gave ships in temporary charter, a practise which continued well into the 1950’s. And thus it could happen that Captain de Kup found himself captain of a non Holland America Line ship the Tamora which became the Meerkerk. (The VNS used Kerk = church name endings for their cargo ships and fontein – fountain endings for their passenger ships as a standard naming pattern) 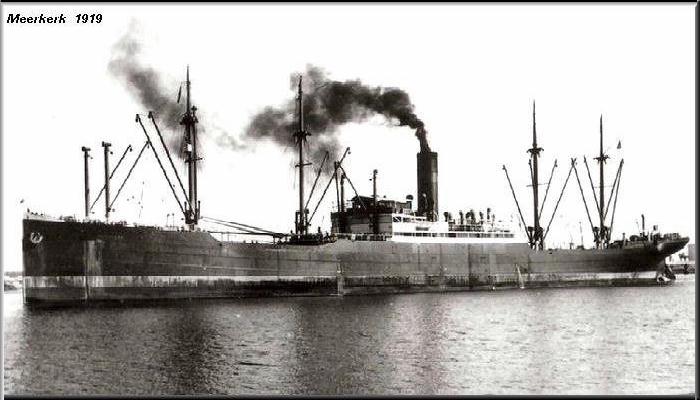 In 1920, just before being put on loan to the VNS on one of their ships, he was sent to Sunderland in England to collect the ss Vechtdijk at the shipyard. This ship he sailed to Hamburg in Germany and from there she was chartered out to the VNS route, which the VNS was still being incorporated. He remains with this ship for 13 months and after a short spell on the ss Amsteldijk, the ship he had been cadet on in 1903, is then assigned to the ss Meerkerk. 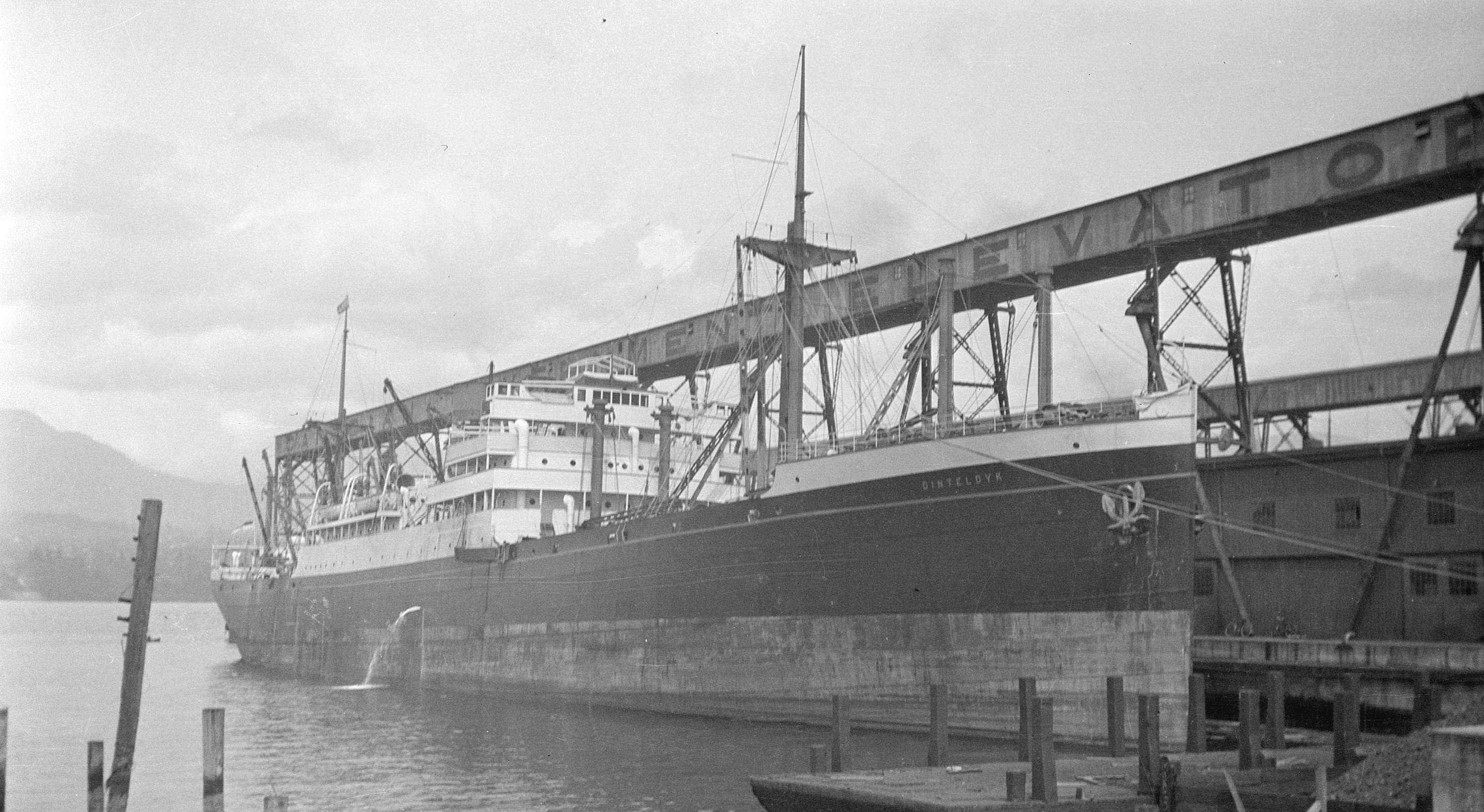 ss Dinteldijk (I) This was the last ship which he commanded. It had entered service in 1922 as the first deep sea motorship of the Holland America Line. The ship served on the North Pacific service of the company which went from Hamburg all the way to Vancouver via the Panama Canal. This photo was taken at Vancouver around 1930 . The ship did not survive the war and was replace by a new Dinteldyk (II) in 1957

For this career after the Holland America Line there is the gap until the 1940’s. Sometime between 1928 and 1940 he settled own in Hilversum (Orchideestraat 9) and we know from his obituary that he was single. He was a member of the local sailing club and took part in their regatta’s (BM class) in 1941 on the Loosdrechtse Plassen. (Peat excavated inland lakes) Furtheron he was the secretary of the G.Z.V (De Gooische Zwemvereniging De Otter) which was the swimming sport club for the county.

When the invasion in the Netherlands took place on 05 May 1940, he must have been at home, as he gets involved with the Dutch Resistance or “The Underground”. He becomes a local commander of the O.D. (c) 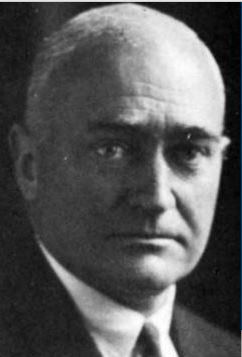 The O.D (service for maintaining order) was setup in various area’s in the country by mostly high ranking officers out of the Dutch Forces, assisted by Cadets which (at that time) were not considered to be needed or a problem by the Occupational forces. The aim of the organisation was  to have a command / governing structure in place once the war as over as in the beginning it was not expected that the war would last very long. The O.D organisation wanted to ensure that there would be no “void” in government between the Nazi’s leaving and the Dutch Government in exile returning. And indeed in 1945 they did play a role in re-establishing the governmental structure once the war was over.

By late 1940 it became clear that the occupier was there to stay and some of the OD people now became active in the KP groups. (KP = Dutch for Knok Ploeg or Fighting group) the KP’s were the operational arm of the resistance and provided active resistance.  Furtheron (d) Captain de Kup seems to, apart from the O.D and the K.P, also been connected to the L.O  (National Organisation to help those who were hiding from prosecution which included Jewish peoples)

I have not been able to  find out yet what he exactly did during this period when he was in charge of a local resistance groups in Hilversum.

But it was not for very long as on 28 September 1941 he was arrested  by the Nazi occupier and sent to a concentration camp after the (first) process conducted by the Nazi occupation against Resistance leaders. According to some sources this was in Maastricht (as the L.O was organised from Venlo) according to some other sources this was in Amersfoort (which is closer to Hilversum but he is not on the published lists of this trial)

After the process he was sent to Amersfoort awaiting further transportation (c)   He ended up in Concentration camp Neuengamme, near Hamburg, where a lot of resistance people were sent to in the following years.  He arrived there on 25 September 1942 and carried camp number 10322. He died on on 11 November 1942. The “Death books” of the camp do not give a clear cause for his death.   (d)

At home they found out fairly quickly about it his death as on 21 November 1942 it was announced by the Swimming Club in the local newspaper.

Officially the Registration office of Hilversum was only made aware of his death when the office received  a note from the Red Cross dated 12 October 1945. This note was received on 27 August 1946 and it was duly noted that he had passed away at Hamburg – Neuengamme. No cause of death was given.  The notation in the register was in conjunction with another number of reports  of locals who had also died in various parts of Germany.

The Municipality of Hilversum named a street after him in 1955, The “De Kup Straat”.  (f)

(**) There was a large group of Resistance people who were convicted at the trials in the Spring of 1942 and those who got the Death Penalty were sent to concentration camp Matthausen and were indeed executed. Question is, what did exactly happen to Captain de Kup, what did he do so that he was caught, put on trial, but then ends up in another concentration camp, 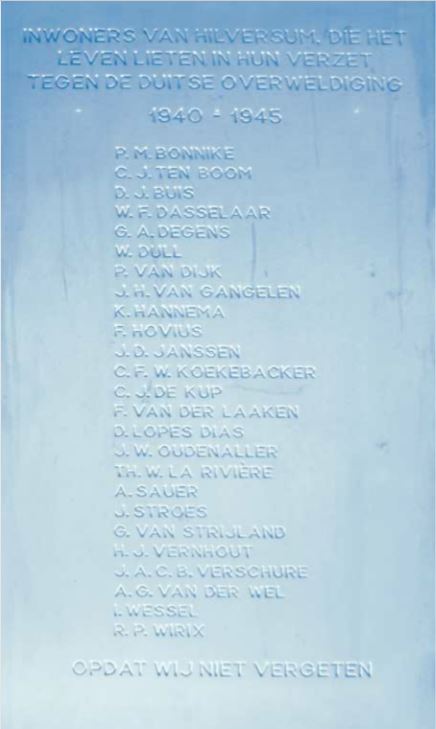 15 Aug. 1914       Temporary dismissed for the royal Navy Reserve due to the mobilization of the country

01 Feb.1930       Temporary dismissed for the Royal Navy Reserve for one month to join the higher war academy.