He was born in  Amsterdam on 5 Dec. 1854 as the son of Mr. Coene van der Zee and Mrs. Hendrika Margretha Johanna Focken. (a) There is at least one brother in the family. Father was a sea captain but on the sailing ships.

I have not been able to trace yet what exactly happened between 1854 and 1882 when he joined Holland America as a 2nd officer. An educated guess it is that he went to sea between 1870 and 1872 as that is roughly the time that he could have finished a nautical education.  1872 to 1882 would then give 10 years to reach the rank of 2nd officer and have steam experience.

As second officer this was his first ship. the W.A Scholten. This ship was named after Mr. W.A Scholten who in 1873 went the company went public bought enough shares so they company could buy a complete ship. When Holland America went exclusively to the DAM ending for their passengerships, W.A  Scholten was  (and is) still homored  with a ships name. Now the Veendam, named after the city where he was born.

On 25 Sept. 1879 he marries at Amsterdam Hinderkien Bakker (Born 24 Sept. 1852 at Wildervank, Groningen).  There is no mention of any children but in his death notification in the newspaper it is mentioned that he was a father, stepfather and a grandfather. He is reported to be divorced on 10 Feb. 1905 in Rotterdam. 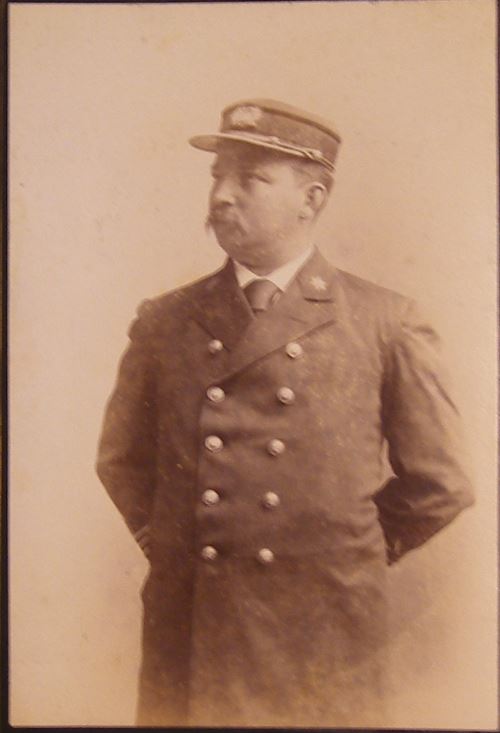 Captain Van Der Zee.  A. Photo early in his career (Photo Courtesy : both HAL Archives and Maritime Museum Rotterdam. They both have  what seems an original print or original copy)

Four years after joining the Holland America Line he becomes a member of the Rotterdam “Seaman’s College” and this is shortly after he was promoted to Captain. Several cities with communities of seafarers had these captain’s colleges which were there to promote and protect their functions.

They all had a name and the Rotterdam one was called Maatschappij tot Nut der Zeevaart. (Company for the Benefit of Seafaring) Each member/captain had a pennant and his was nbr. R 7 which gives me to believe that he must have joined at, or shortly after the College was founded. He was allowed to fly this flag from the mast of his ship. (b)

The life of a captain in the liner trade was mainly made up of making round trips, doing it safely and trying to keep the schedule. Hence life was not as colorful as it might have been if he had been sailing on the cargo ships whose operations were a lot less regulated.

Pending further information coming forward, I only have a small anecdote to relate:

A little anecdote as recorded in the local Newspaper in 1918 about an early crossing:

“The crossing from Rotterdam to New York took about ten to twelve days and our first trip on de the VEENDAM was faster than usual as the Captain put up sails fore and aft so that we arrived in the afternoon of the 17th instead of the morning of the 18th. The Captain of the VEENDAM at the time was, I believe, van der Zee. I remember he helped me and another boy fly a kite from the stern and at night we sometimes played ‘slofje onder’, everybody sitting on the floor at the main entrance, the Captain included.”

As related by Mr. Henry M. Duys who made as 9 year old boy a crossing on the Veendam from Rotterdam to New York between 18 and 27 July 1894 (Editor: This was voyage 44 of the Veendam sailing from Rotterdam on 18 July, calling at Boulogne Sur Mer and arriving in New York on the 27th. The ship left New York again on the 4th. of August) (e)

In 1895 he is appointed Lieutenant First Class Special Category of the Royal Navy. The Netherlands had in 1893 started a Merchant Navy to Royal Navy reserve program and Holland America actively encouraged officers to take part in it.

This became even more prominent when in later years the company obtained the National contract for carrying the Dutch Mail. Then it became imperative that a Captain with Royal Navy Reserve Status was Master of a passenger ship carrying the (express) mail.

On the first of July 1897 one of the Directors boarded the homebound ss Spaarndam in Boulogne Sur Mer to advise Captain Van Der Zee that he had completed 100 voyages for the company without mishap and will therefore receive the 100 voyage medal of the company. At the same time it is announced that Her Majesty the Queen has approved that he will be made a Knight in the Order of Orange Nassau. (Note, a Dutch knight is not the same as a British Knight who then carries the title Sir, plus first name. In the Dutch hierarchy a Knight is below Officer and Commander) A Month later on the return of the Spaardam after the completion of its next voyage there is a celebration with lunch on board the ship and here the medals are officially presented. The festivities are also attended by his father. 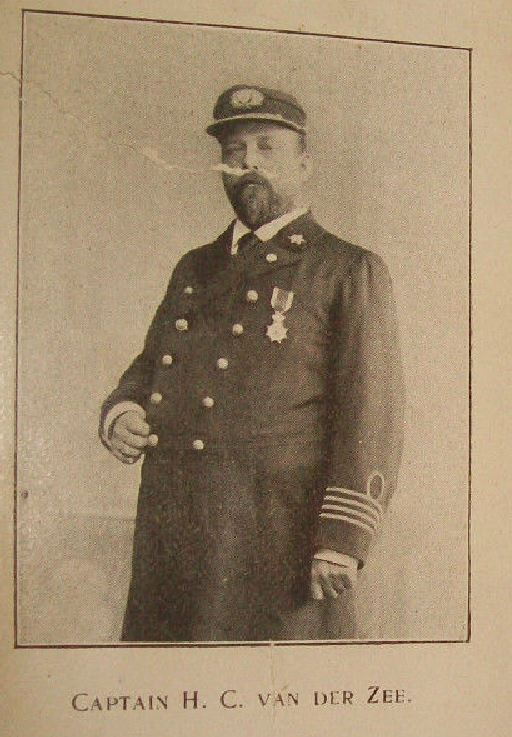 With the Royal recognition on the dress uniform.

In this period he is several times mentioned in the navigational Periodicals of the country for being a very competent sailor in regards to the record keeping for Magnetic Compass Errors. In those days there was only a magnetic compass to steer on, and keeping records was extremely important as it made it possible to update navigational charts with the latest local earth magnetic variations. The results of it helped to correct the magnetic course in the best way possible to the True Course which would bring the ship to the right destination.

In 1902 he is back in the newspapers. While captain on the ss Rijndam  he oversees the safe rescue of 8 crew of the Norwegian sailing ship Pons Aelii which with a cargo of wood had gotten into trouble and was sinking. The chief officer with 8 Rijndam crew rowed over and got them off safely. The ship was then set on fire to avoid that the wooden hull would drift around half submerged and thus form a danger to other ships. The rescued crew was landed four days later in New York.

After his divorce in 1905, he remarries just over a year later on 09 July 1906 with a Mrs. Anne Crammond Woods (Born. 03 March. 1871) This ties in with his sailing record as in June he is given one voyage vacation and that must have been for getting married. This was voyage 40 of the Ryndam and Capt. Pieter van den Heuvel takes the relieve voyage.

On 13 November 1908, the day before the next voyage of the ss Nieuw Amsterdam commences the Captain is officially recognized again as he now has completed 200 crossings for the company without a mishap. He is presented with the Gold medal of the company and a bronze piece of art. (What sort of art is not known) As was the case with his 100th crossing, he is again the 2nd captain in the company who achieves this as he is following Captain Bonjer.

He remarries just over a year later on 09 July 1906 with a Mrs. Anne Crammond Woods (Born. 03 March. 1871). This ties in with his sailing record as in June 1906 he is given one voyage vacation and that must have been for getting married. This was voyage 40 of the Ryndam and Capt. Pieter van den Heuvel takes the relieve voyage. 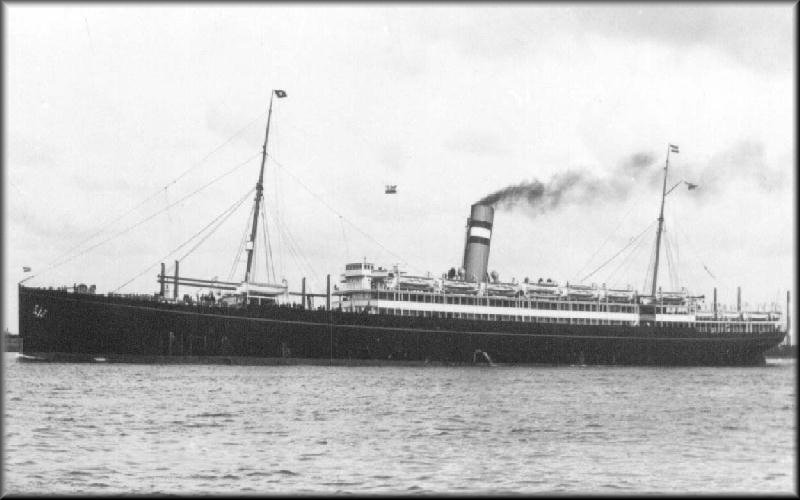 The ss Ryndam came in service just after 1900 as one of three sisterships.

On 23rd. July 1908 he transfers to the ss Rotterdam, the flag ship of the company. Taking over from Commodore Bonjer. (*) He makes four voyages on the ship between 23 July and 02 December and then requests retirement on 31 December 1909.

(*) No doubt Had Captain van der Zee stayed on a little bit longer, then he had also been promoted to Commodore but in his situation, Commodore Bonjer was not yet fully retired. Hence the next company commodore was Captain Stenger.

Looking at the name, his second wife must have been English or American but must have lived with him in the Netherlands as she passes away on 01 May 1917 at Nijmegen. Captain Van der Zee himself passes away on 28 July at Arnhem, after 8 years of retirement.

Listing of ships and sailing days: (From the records held in the HAL archives. (d)

Left per ss Trave for Rotterdam arrived there 22nd.

Left on the 28 Oct. for Liverpool and on 29 October per Canada to Quebec.