Note:  Anybody who researches history and writes about it struggles with the question: do I have all the facts and is my history factual  and well balanced.  Hence a good history book  will only be written several years after an occurrence when there has been access to all those facts (or at least as many as possible) and personal opinions have somewhat faded to recesses of one’s mind. Thus the following part does not have all the pertinent facts about the when and why as of yet.  It will need to be re-written or at least revised  sometime in the  future.

The Covid- 19 virus had been slowly spreading over the world and everywhere governments and medical experts had been grappling with trying to find out, what it was, how severe it was and how it would impact the world.  The cruise company’s followed the guidance of the various country’s it sailed from and then came the moment of a complete stop. Which happened for the cruise ships nearly everywhere in the world at the same time. 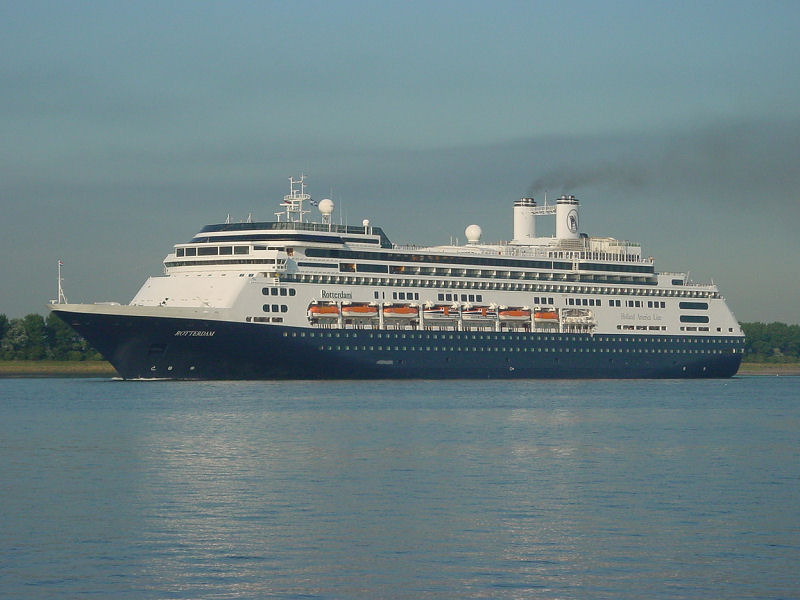 For our ships the order came on 12 March; all cruises were cancelled for the time being and the captains were ordered to return to the home port or go to their nearest port of call from where guests could be repatriated.  For the ships on longer voyages this was easier said than done as several ports who could have acted as a repatriation ports where closed down by the local governments.  For some ships close to Fort Lauderdale it was a matter of turning around and landing their guests. For a ship as the Rotterdam VI is was a matter of just staying in Puerto Vallarta and over the course of three days sending all the guests home by regular or charter flights.  But for a ship as the Amsterdam, being on the world cruise and sailing in the Far East, it was more complicated and it was not before  March 22nd that the guests were disembarked in Fremantle. And for them it took several months before they were re-united with their luggage which the company got home only with great difficulty and great organizing creativity. 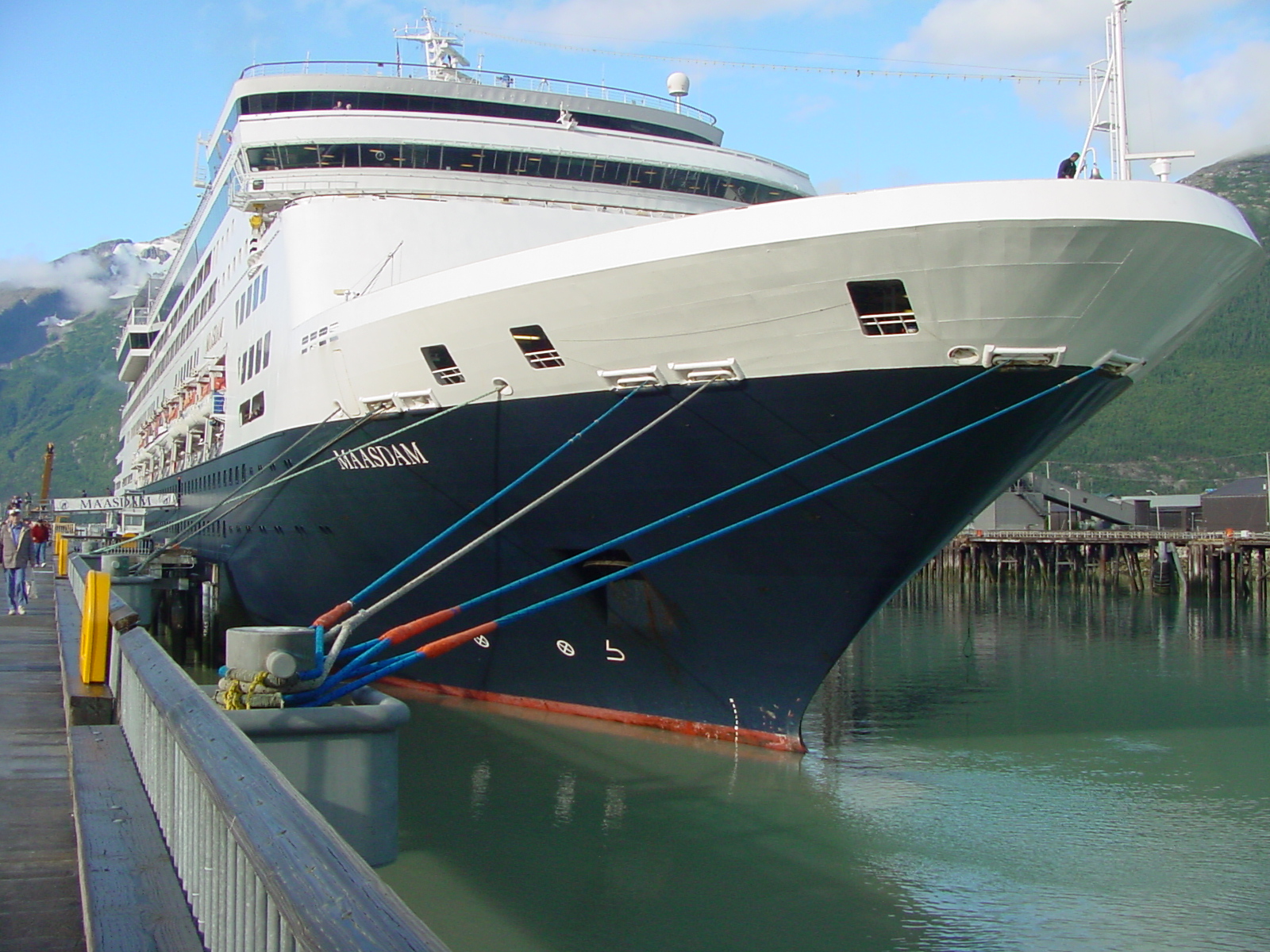 The ms Maasdam in Skagway Alaska at the Broadway Dock,  while under the command of Yours Truly

For a ship as the Maasdam which was island hopping in the South Pacific the only option was to sail back to San Diego  and then managed to disembark the guests by March 28. None of these re-calls and disembarkations was easy and each ship has a story to tell. For the time being I am referring to my blog of 10 April 2020 for the story of the Zaandam and Rotterdam. this gives a good idea of what was going on out there as this particular time.

Getting all the guests of was a major tour de force for the company shoreside office personnel, but once the last guest was gone, things were not over. Initially we all thought this was going to be for a short period and the company made tentative plans based on the initial medical understanding of the Virus that the ships would all be back within a few weeks. 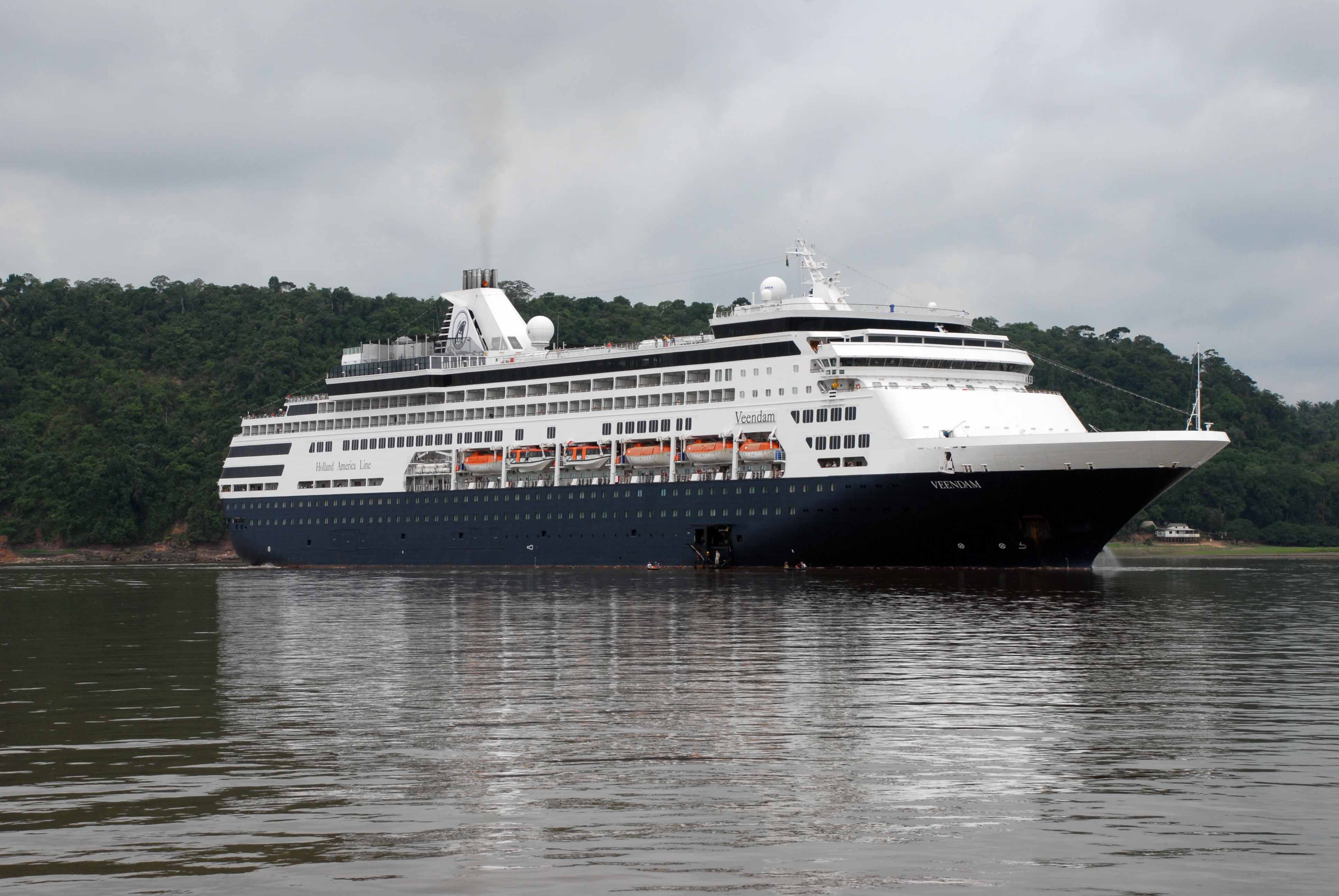 The ms Veendam (IV). This ship had started on March 12 a Caribbean Cruise from Fort Lauderdale and thus had it fairly easy when the No sail order came. It just turned around and sailed back, landing its guests on March 18. Then it went at anchor in the Bahamas.

But then more and more ominous messages came out of the various medical pipe lines and it became clear that we were in it for the long haul. Hence the ships were to go in lay-up after most of the crew had been repatriated. A calculation made was how many crew would be needed for a safe ship operation while at the same time keeping the ship in good condition. Depending on the size of the ship the number arrived at varied between a 100 and 125. The rest of the Officers and Crew were to be repatriated to their home countries. Most of these countries had their airports closed and/or required 14 days of quarantine before entry was allowed and thus no regular air transport or charters could be used.

Hence the decision was made to use the ships to get the crews home. Not all ships were needed and the HAL Group bundled their ships capacity and  for several days the ships were engaged in an active tender service  grouping crews with the same nationality  on one or more ships and then sail for the home country. Thus it was possible that Princess crew ended up on HAL ships and vice versa.

Ships were clustered in various areas such as outside Puerto Vallarta Mexico and south of Freeport Bahamas. While on board each crewmember was assigned to a guest cabin and when on arriving in Manila, Djakarta, Singapore and related ports, they could disembark after the local health authorities had completed the testing. For some ships this turned into a sort of “Bus Service” calling a various ports around the world.  Most of the ships crews come from the Pacific Rim with the Philippines being the largest supplier. 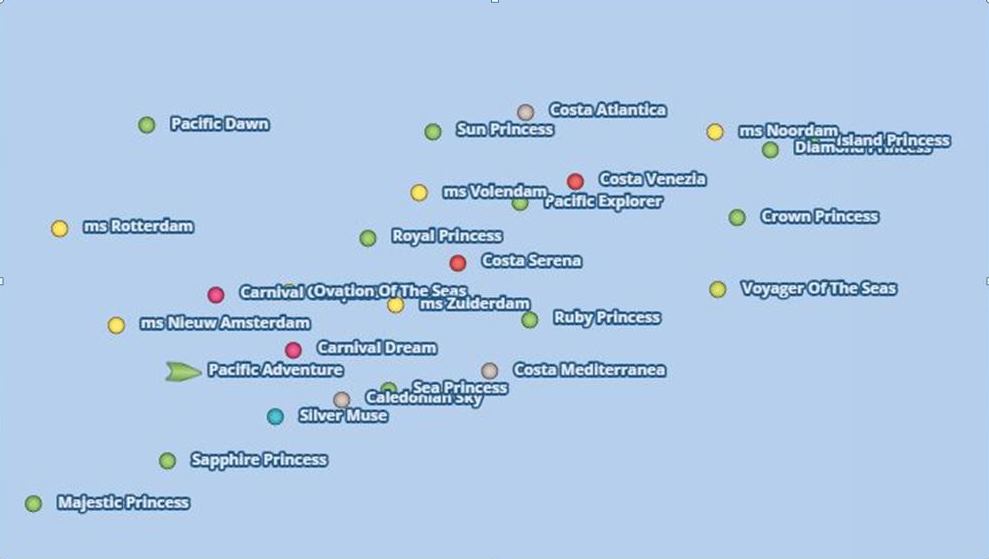 An snap shot of the AIS screen of Manilla Bay in April 2020. At one time well over 30 cruise ships, small and large, where gathered here to bring their crew home.

As an example the schedule of the ms Rotterdam:

29 April: Assigned to carry crew to Asia via Cape Town

19 May: Arrives at Cape Town awaiting return of swab tests and to be allowed to land South African crew. (These were mainly the concessionaires who worked in the Beauty Parlours on board)

Due to local situation the ship was diverted to Djakarta to first land Indonesian crew.

07 July: Departed from Manilla after landing all Pilipino crew. Sailing for Singapore for bunkers.

08 July: Departed Singapore heading for Cyprus for warm lay up (Rotterdam is assigned to Europe for the 2020 summer season)

26 July. At Anchor at Limassol Cyprus. 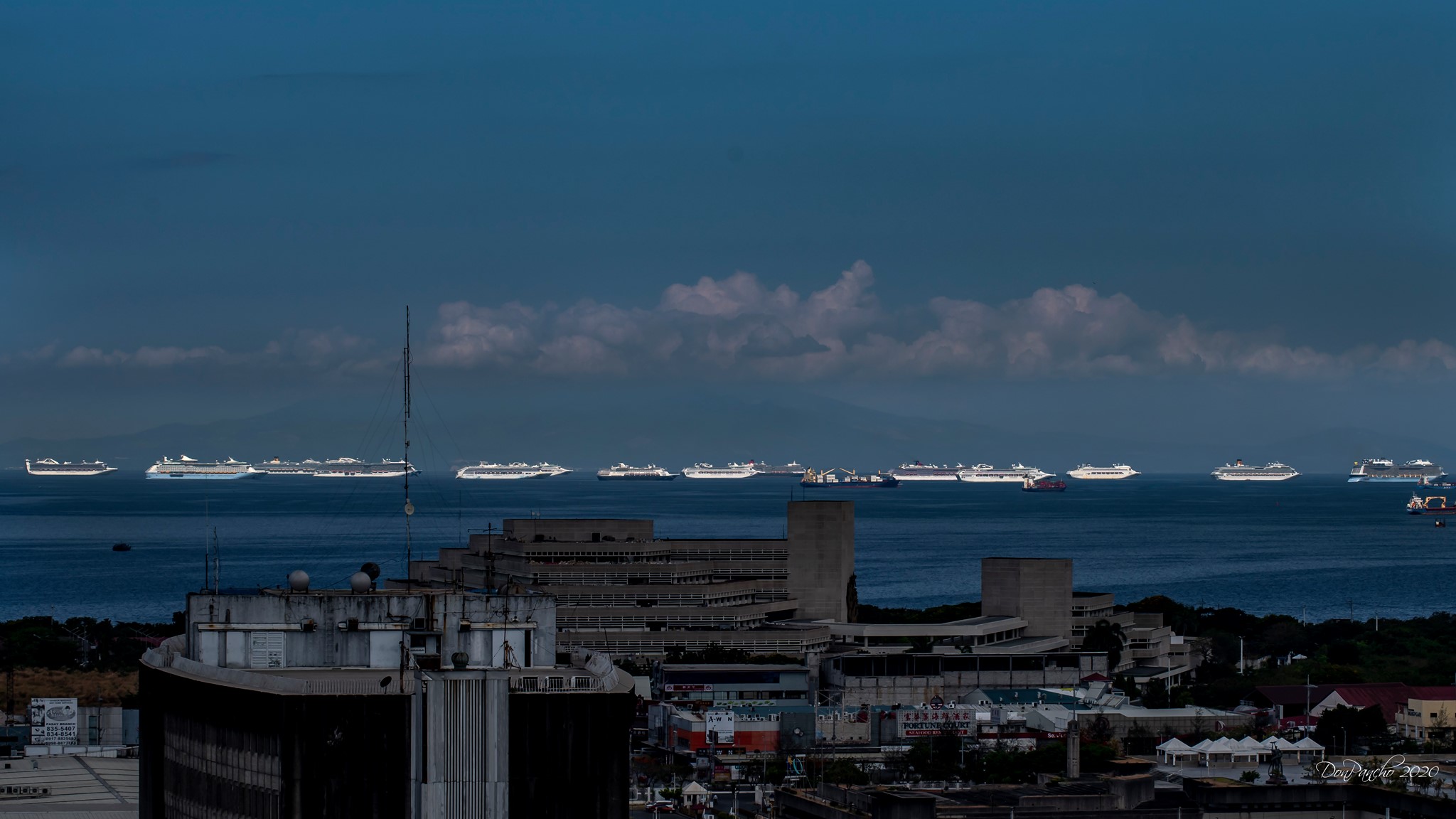 Manilla Bay at night on 06 May 2020 (Photo courtesy: Samuel-Andre-C.-McDonald)

Apart from the ships delivering crew, the company continued to use charters to bring smaller groups home, often to landlocked countries. By July the last crew had been repatriated and for most of the functions of Officers and Crew which needed to be kept filled while in lay-up, relief systems had been set for. Some Officers and Crew who were about to be relieved in March when the Lockdown started saw their contracts extended with another 3 months. Not easy when the circumstances in which the crew and ship operated where less than cheerful with the ever present danger of infections looming over them.  It is worth noting that the final cruise ship crewmember (although Not Holland America) made it home in February 2021 when she finally reached her home island of Vanuatu in the South Pacific.

Carnival Corporation has always paid for their new ships in cash or with short term loans and thus had money to weather the storm. Still ships are costly and thus decisions had to be made to reduce costs and to create a situation to return to service as “lean and mean” as possible. A corporate fleet wide review was made and it was found that 18 ships out of the 111 ships accounted for 12% of the fleet but for only 3% of the operating income for 2019. That is fine when the ships are sailing but when they are in lay up the cost to maintain them is about the same as the units which generate more revenue.  Of those 18 ships, four came from Holland America. The Amsterdam, Rotterdam, Maasdam and Veendam. On 20 July the announcement came that all four had been sold and by late August the four ships had been handed over to their new owners. Amsterdam and Rotterdam went to the English operator Fred Olsen Cruises and the Maasdam and Veendam went to a Greek Ferry Operator which wanted to enter the Cruise Business. (This company later also managed to obtain the ex Ryndam and thus now owns 3 of the 4 S-class Ships)

All the remaining ships were by now in Warm Lay-up. Cold lay-up means that there basically only a few watchmen on board, Warm Layup means that the ship is fully operational and sail at any minute. The crews on board still had to be relieved for their regular working circle as much as possible and the ships were clustered in various parts of the world. There were they might  start operating once the pandemic would be under control and there were the local authorities operated a “Green Lane” system so crew rotate.  As and example: 25 August:

Noordam and Zuiderdam at Katakolon Greece. 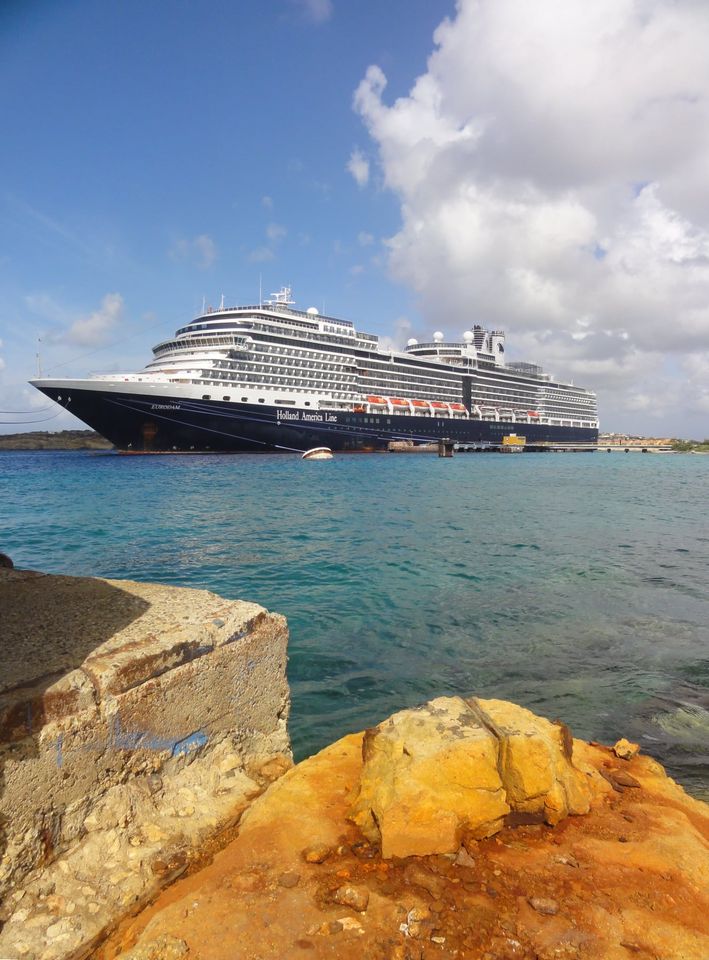 With the fluctuations in the success of fighting the Corona Virus the ships did not remain in the same locations but moved around. Also  when there was no end in sight the company started sending Ships to Drydock as the time was now available and docking work was allowed.

At the same time there was a little spot of light in the darkness when the announcement came that the ms Ryndam (IV) under construction in Marghera Italy, would be renamed in Rotterdam (VII) to continue the most famous ships name in the Fleet. She was floated out  on 01 October 2020 and was originally scheduled to be delivered in May 2020. With Italy in lockdown in the winter of 2019/2020 the fitting out work was delayed. In early spring the shipyard opened up again and the ship is currently on schedule for delivery on 31 July 2021. 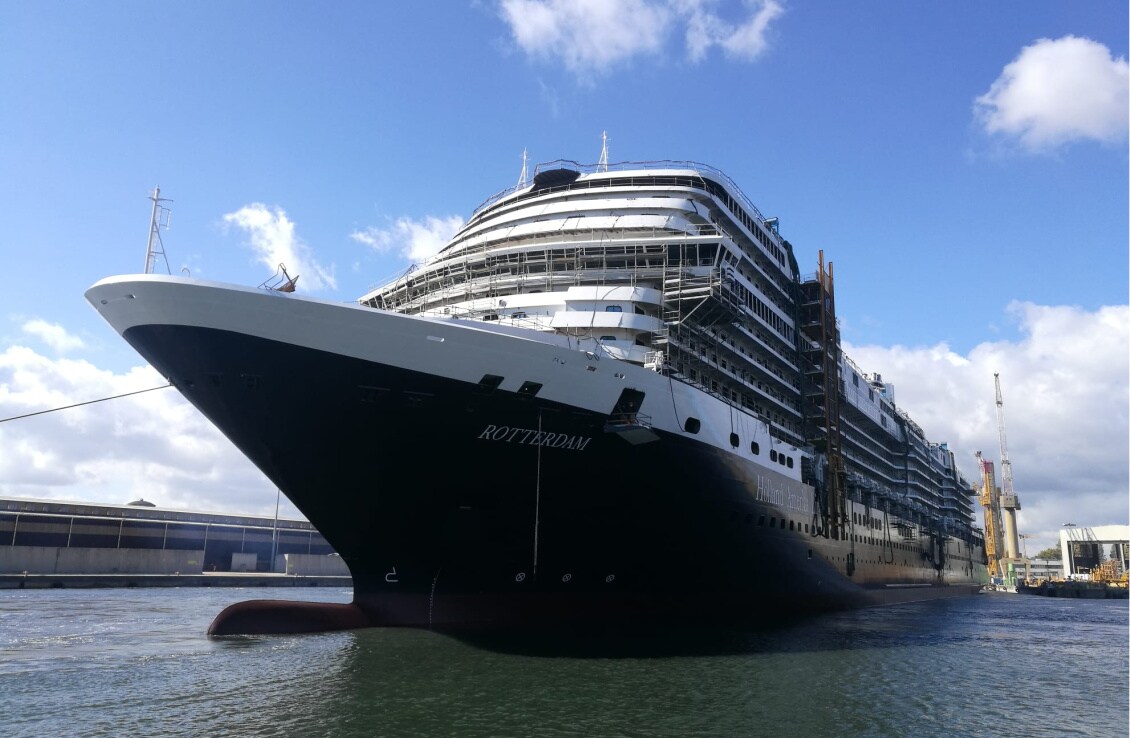 The float out of the ms Rotterdam (VII) on 01 October 2020. she is seen here being pulled by a tugboat towards here fitting out dock. (Photo courtesy Holland America Line)

In December there was hope that the date of returning to cruising was coming closer when the CDC, the USA Center for Disease Control, decided that it would certify ships that were able to comply with their Covid -1 9 prevention rules so they could return to sailing. Each company could send a number of ships to Los Angeles to take part in this program. As it was not expected that all ships based in USA would return to service at the same time only some were send.     For Holland America these were the Koningsdam, Nieuw Amsterdam, Noordam, Westerdam and Zuiderdam.

And then nothing happened. Thus the ships had to drift off the Californian Coast and call in for fuel and provisions at San Pedro or San Diego. Holland America arranged for a resort in La Paz (Bahia California) to be made available for the crews to go ashore for some R&R inside their own bubble. For the ships on the East coast Half Moon Cay was made available. 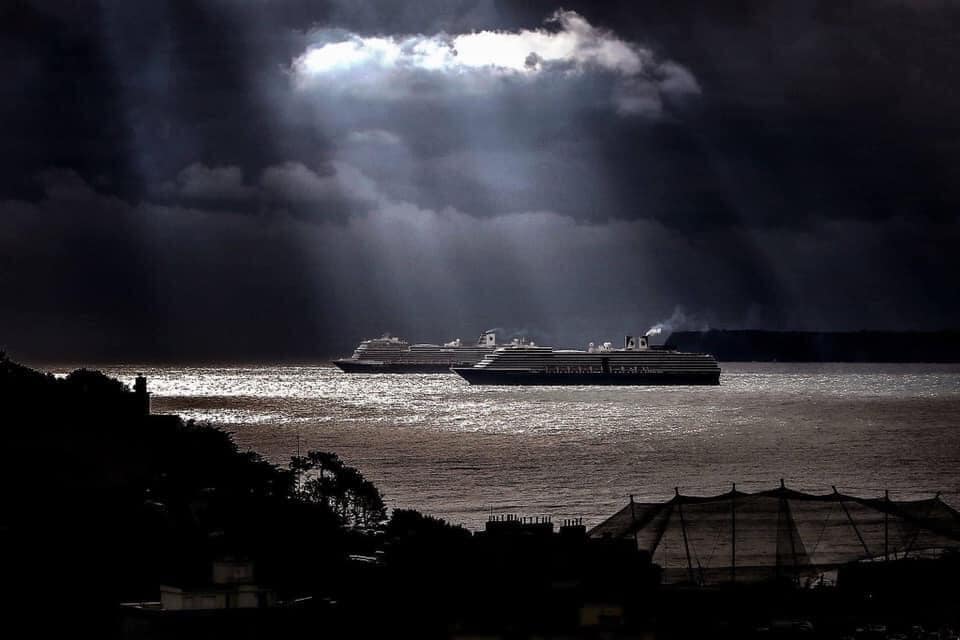 Westerdam (III) and Nieuw Statendam (VI) at anchor in Tor Bay near Southampton England on 11 Oct. 2020. (Photo courtesy: Maker unknown. CAN THE MAKER PLEASE DROP ME A NOTE ON Captalbert1@aol.com)

By February 2021 the vaccination programs in most countries started to gather momentum and some positive announcements were made. Indicating that by early summer cruising cold start again. Thus there was hope that part of the Alaska season could be saved.

Unfortunately Canada decided to close their ports to foreign cruise ships for the whole of 2021 and that put an end to cruises to Alaska.  (To avoid violation of the Jones and Passenger Service act of 1886 a non USA flagged ship has to call at a non-USA port in order to sail to USA ports) Now with Vancouver and Victoria out of the equation an Alaska cruise was not longer possible. Plans are to keep the Hotels in the Alaskan interior  open as these can be reached by plane or train.