Lambertus Rijnink was born in  Amsterdam on 6 February  1883 as the son of Lodewijk Rijnink (Born on 20 November 1854) and Wilhelmina Maria Lieth (Born on 08 April 1856) He attended the local Maritime Academy  the Kweekschool voor de Zeevaart in Amsterdam in 1898 and joined the Holland America Line in August 1901 as a cadet, on the ship named after his hometown, Amsterdam. His father was the Sr. Superintendant Public Works of the city of Amsterdam. 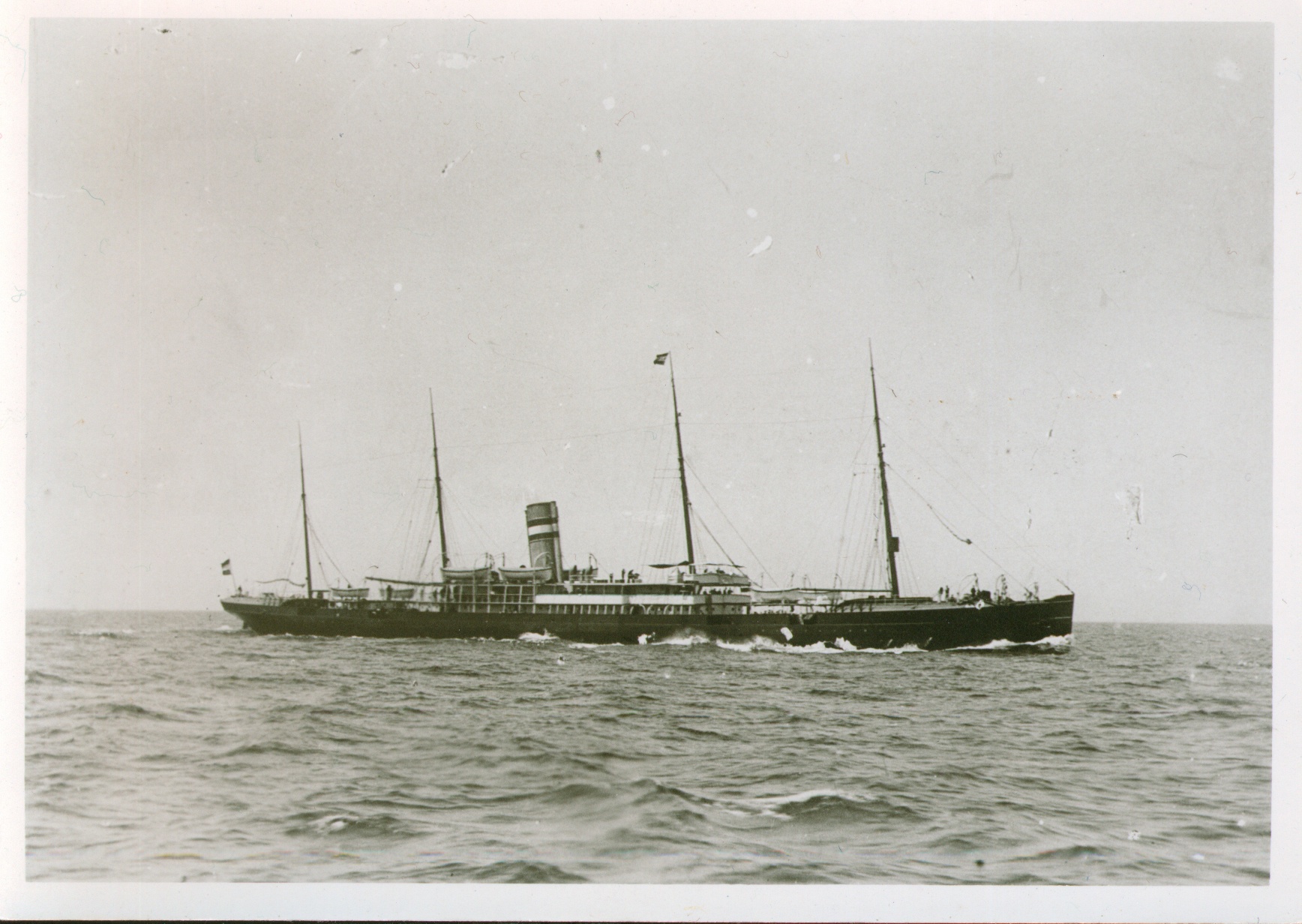 The ss Amsterdam (II) This was the first ship and the start of his career. Please note the open bridge which is clearly visible on this photo.

On 28 August 1908 he settles down in Rotterdam with his mother and sister where he meets Zwaantje Duit (Born 04 December 1888). She is the daughter of Captain Wibrandus Duit (see biography on this website) and they marry on 22 September 1910. (a)

The interesting connection is that he married the daughter of an ex Holland America Line Captain, Captain Wibrandus Duit. They never sailed together as Captain Duit left the company in 1899. Rijnink was promoted in 1911 to captain after 10 years with the company. He was then only 27 years old but the company had just taken over the Burgh Line with several ships so promotion was suddenly fast as long as you had your Master License. Also his promotion was directly due to the death of Captain Swaan of the Soestdijk who fell overboard during the home bound crossing  in 1912. He took over as being the Chief Officer and then stayed with the ship until another captain was scheduled. 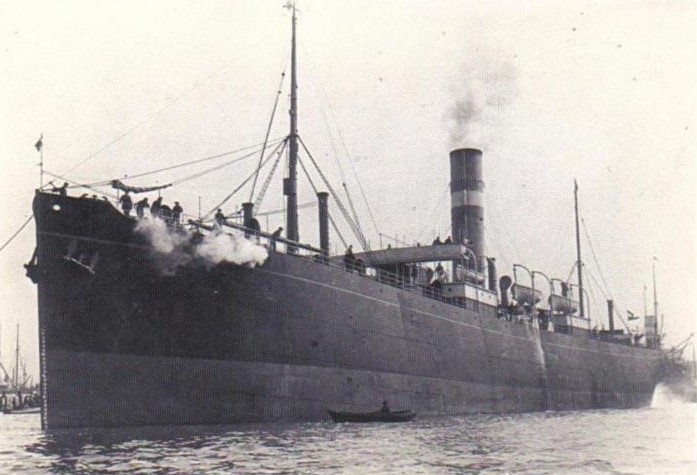 The ss Soestdijk (II) His first command. Please note the steam at the bow caused by the anchor gear.

By 1930 he is senior enough to be assigned to the passenger ships and is given command over the ss Maasdam. But only for 2 years as per 1 January 1932 he is dismissed from the company due to the depression. My assumption is that he was picked out from “among the crowd” as he was one of the younger captains and thus stood a better chance to find another company.

If he did so is still unknown.

He is noted to have passed away on 28 April 1963 in Voorburg the Netherlands, five years after his wife.

Editor: I have not been able to discover many anecdotes about the captain but he was the chief officer on board the ss Soestdijk when it loaded a replica of the Haelve Maen (Half Moon), the sailing ship with which Henry Hudson the east coast of what is now the USA explored. He sailed up the river which is now called the Hudson River and made it possible for the Dutch to found Nieuw Amsterdam later to become New York. Holland America donated a replica of this sailing ship in 1909 for the celebrations of the founding of Nieuw Amsterdam. 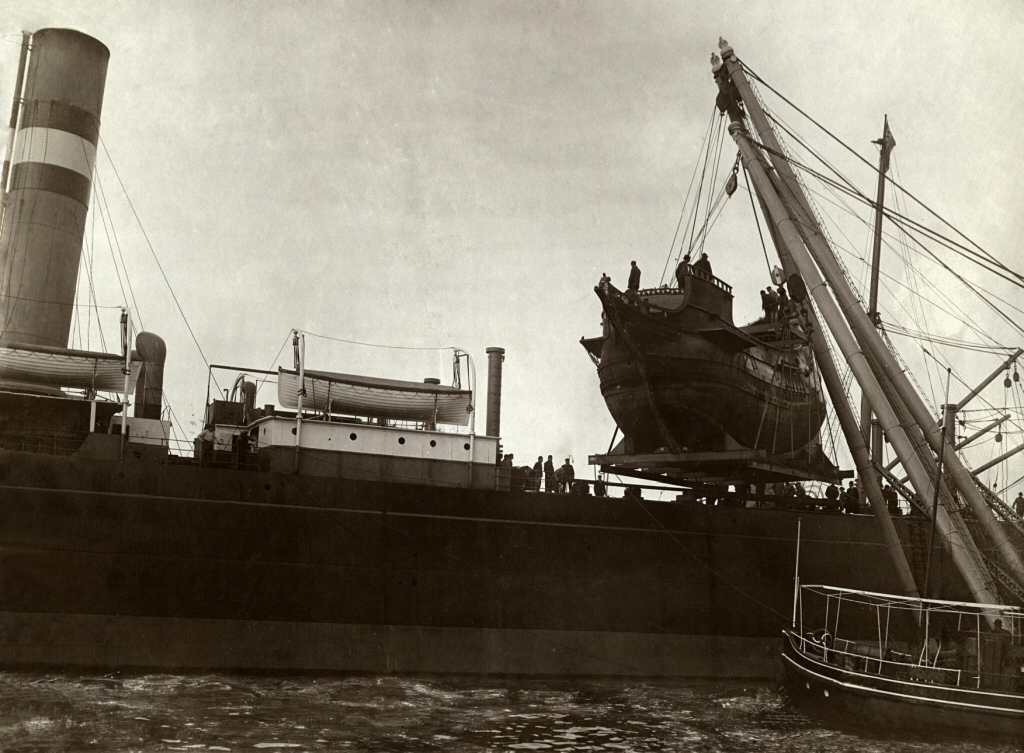 Hoisting the Haelve Maen replica on board the ss Soestdijk. Lambertus Rijnink will have been deck somewhere to supervise the loading as the chief Officer was in charge of all the cargo work.

02 Dec. 1907       Assigned for a six months exercise on board HM Instruction vessel  HMS Atjeh, at Willemsoord.

24 Aug, 1910       Temporary dismissed for 3 months until ….. for Royal Navy, Placed as Ensign First Class onboard the training vessel Atjeh.

Promoted temporary due to dead of Captain Swaan on board during the voyage. Sailed the next voyage as captain until 02 April.

04 Jun. 1931        Receives the silver medal of the Dutch royal Meteorological Institute for the keeping of the weather journals on board his ships.