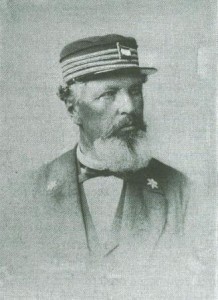 First Captain of the company.

Born on 13 Aug. 1824 in Katwijk (small fishing village North of The Hague). His father was also a Merchant navy captain (Leendert Jacobzoon Hus) and Captain Hus was thus named after his father or his grand father. The name of his mother was Jacoba Maartensdochter Spaanderman and the name Jacoba we see returning with the name of his daughter.  (a)

In 1847, he is then a navigation officer, he marries Trijntje Maartensdochter Schaap. (Whose father is also a Merchant Navy captain)

Their daughter has the honor to baptize the ss Rotterdam (I) when it was built as the first company ship in 1871. Captain Hus had taken his family with him to Scotland when the company sent him to supervise the new building.

Captain Hus was thus the first master of the company when he took the ss Rotterdam on its maiden voyage in October 1872. When Plate Reuchlin went public / on the stock market in 1873 and became Holland America, he was given command of the first new built financed by stock issue. This was the ss W.A Scholten, named after the man who single handedly bought enough stock to pay for a complete ship.

He is first referenced as being a captain in 1853 when he is in command of the Barque “Woltemade”  with Rotterdam  as registration. In 1857 the first steamship follows, The Levant, owned by the same company. Then in 1872 he switches to Plate Reuchlin the predecessor of the Hal. So by that time he had been in steam for 15 years. This must have made him one of the most steam experienced Dutch Captains from that time. He must have been made an offer he could not refuse to leave his old employer behind. (b)

For the HAL, he commands the ss Rotterdam (I) and the ss W.A Scholten. With the last ship he makes 7 voyages and then leaves the sea to come a Damage Assessor Expert in the port of Rotterdam in 1875. This was an independent person who assessed on behalf of Insurance company’s damage to ships.  He was not the only one who choose this as a 2nd career: his colleague and 2nd captain of the company (Deddes) did the same thing a few years later and so did a 3rd captain (Landman).  (c)

Captain Hus remained living in the port of Rotterdam after his retirement. He passed away on the 6th. of June 1901 at the age of 77. The Announcement in the local newspapers indicates that there were three children,  M.Hus, J.H Hus and J.C Hus. (b.d) His wife reached the blessed age of 91.

To those who read this biography: If you have any additional information about Captain Hus and his family or photos (as thusfar there is only one known) then please contact the author via email:  Captalbert1@aol.com.

(*) These two ships were on a regular “liner” schedule between Rotterdam and Le Havre in France. In the local Rotterdam News paper there is an advertisement dated 08 November 1855 whereby the ships leave on 4,9,14,19,24,29 of the month from Rotterdam and return on 4,9,14,19,24,29 from Le Havre with the Levant leaving Le Haver on 04 November and the Admiraal going the other way. It is advertised that the service links in with the departure of the Trans Atlantic Packets (read sailing ships) from Le Havre to New York and Rotterdam.

Then in the period 1869 to 1871 he seems to have worked for a small steamship company owned by Reuchlin as he is mentioned in the memoires of Captain Deddes. Together they then transferred to C.V Plate Reuchlin in 1871.

Voyage listing: (e)  Please note for the dates: Where possible the actual sailing dates were used. There are also “announced departure dates” out there where the company advertised a sailing date. However often the ship left on another day. Then there are also dates from the newspapers which lists of who arrived with the ship. Those newspaper dates are seldom the real dates that the ship arrived as there would be a delay between the ship arriving, the newspaper man obtaining the information and the newspaper publishing it. Because the company records from the very early days are very sparse (and also not all arrivals in New York where recorded) I still have a few question marks. Hence I have only listed the departure dates from Rotterdam.

(* called at Halifax as the ship ran out of coal)

Transfer to the W.A Scholten. Note: I have not yet been able to find out if Captain Hus spend time at the shipyard and when he took command of the ship to bring her to Rotterdam.

(**) The call at Amsterdam is not completely clear although it is mentioned in the Amsterdam newspapers both for departure and for arrival, but it would be completely out of context. Thus to be confirmed

Retires from company and from the sea.

(a) The old hand & the sea.  Book issued about the Katwijk Maritime history and the genealogy of the Owehand and Spaanderman families. issued Rijswijk 1981, 305 pages Hardback with illustrations. ( via Mr. John van Kuijk)

(e) Hal Archives as held by the Municipal Archives of the City of Rotterdam & Contemporary Newspapers.