PAX.CAPACITY: 8 in First Class and 288 Third or steerage class. 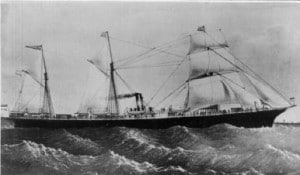 The ss Rotterdam (I) with the funnel markings of the  founding company Reuchlin & Plate.

Constructed of iron with two full decks. Could be rigged as a brig with 10 sails. She was ordered on 11 February 1871 with the keel laid on 22 June 1871 for the Dutch company Plate, Reuchlin & C.V. of Rotterdam, the forebear of the Holland America Line. The hull was baptized and launched on the 6th. of June 1872 by Jacoba Helena Hus, the daughter of Captain Jacob Hus, the first master of the ship.

Delivered on the 7th. of  September1872 to C.V. Plate Reuchlin & Company of Rotterdam at a cost of £ 30,000. Due to a labor strike at the yard the delivery of the ship was considerably delayed. She commenced her maiden voyage on the 15 October 1872 sailing from Rotterdam via Plymouth to New York with on board 10 Cabin class passengers and 60 emigrants. 600 tons of cargo was carried. The crossing was made in 14 days and 6 hours. This was also the first voyage of an own ship for the company. The ship leaves New York on the 5th. of November to return to Rotterdam. 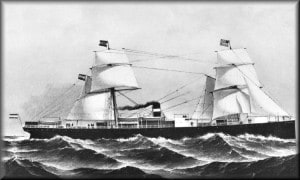 The identical ship but now with the funnel markings of the NASM.

On 1 May 1873 ownership is transferred to the Nederlandsche Amerikaansche Stoomvaart Maatschappij of Rotterdam, later also known as the Holland America Line. This was caused by the fact that the company went public to attract more money. The NASM remained the official nme until 1896, but from the beginning onwards everybody called it the Holland America Line.

Some excitement occurred in 1876 when on 28 January the New York Times reported that the wellknown “Boston Forger” Mr. E.D Winslow, had escape from the United States to Holland by taking passage on the ss Rotterdam. He had with him his family of 3 persons, a Bankers draft for 3,700 Dutch Guilders and $ 200,000 in Gold coins. He was followed in hot pursuit by two Detectives but they only traced him to the Holland America docks by the time the ship had sailed. As the USA had no extradition treaty with the Netherlands, his escape was complete. No records have been found sofar which indicates how he fared at the other side of the North Atlantic Ocean.

On 29 November 1879 the New York Herald reported that the arrival of the ship created quite a stir as she arrived minus her foremast and her steerage quarters completely wrecked. The ship had left Rotterdam on November the 8th. and should have arrived, with good weather, in New York on the 20th. Some ferocious weather had caused considerable damage to the ship and had resulted in a delay of 6 days as she docked on the 26th. November. There were no reports about any casualties.

In the Spring of 1883 the ship is refurbished and new boilers are installed at the yard of the  Nederlandsche Stoomboot Maatschappij in Rotterdam. (2,040 Brt.) this improvs the fuel consumption considerably. The ship returns to service but only makes a few crossings.

On 26 September 1883 the ship strands on the Zeehondenbank near the Dutch Island of Schouwen in position 51o 41’ 08 North, 03o36’50 East. All the 56 passengers are saved by the local life boat the “Zierikzee” (A local fishing vessel, adapted for this purpose) and landed safely ashore. The crew arrives shortly after having being transferred to the tugboat Nieuwesluis which had been send out after the stranded ship had send out a request. Later on a 2nd tugboat, the Hellevoetsluis is dispatched. However the ship was sitting so high up on the bank that very little could be done.

Then the weather turned for the worse and the abandoned ship breaks into two pieces on 12 October due to the pounding waves building up over the sandbank and eventually the hull disappears under the sea. Any salvageable items are sold by public auction on 29 October 1883. Some remains of the wreck are still there, located in 5 meters deep water and it sometimes visited by local divers.

Past Captains of the Ship:

For more information about the captains see: Captains of the Past section.