The owner of the Rotterdam Lloyd was the company Wm Ruys & Zonen which had its head office in Rotterdam. The ship was engaged by them on cargo routes to the Mediterranean. They were willing to charter the ship to C.V Plate & Reuchlin and did so through the cargo broker Wambersie & Zoon. The latter was also looking after the outgoing cargo for the new company, to America.

Thus the ship was never owned by Holland America but one of the many charter ships that were used through the years. It is however very significant in the company’s history as it was the first ship, that the predecessor of the Holland America Line used. The two ships that the company had on order, the Rotterdam and the Maas, where delayed in completion due to strikes and the shortness of materials for the construction. In order to fulfill commitments already made by the company for cargo and emigrant transport to the States, they chartered the Ariadne 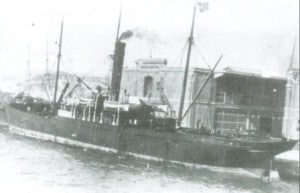 As a result the Ariadne left on 4 July 1872 under the command of Captain Bakker from Rotterdam with on board Dutch emigrants who would be the first Dutch to reach the new world by steam ship sailing from a Dutch port. The ship arrived on 27 July in New York amidst a very enthusiastic welcome. To commemorate the occurrence, a parade with torches and music, was organised in the evening of the 1st. of August. The parade went from the Casino building in town to the dock of the Ariadne and the aim was to congratulate the commander with the successful crossing. The Ariadne only made one voyage for the company as by that time the new ships were arriving and then she was duly returned to her owner. Their own ship the Rotterdam sailed in October 1872 and less then a year later in April 1873 the North Atlantic Steamship Company, later Holland America Line was officially founded.

The Ariadne was sold in August 1881 to the French company Armenment Eugene Grosos & Cie, Le Havre and renamed in Ville de Messine. It saw service on the routes from Spain to Algiers with as homeport Le Havre. This company was absorbed on the First of May 1882 by the Compangnie Havraise Peninsulair de Navigation Vapeur, Le Havre. The ship was transferred to this company but kept the same name. Records of this company indicate that by that time she had a triple expansion engine with one boiler. It gave a output of 400 HP, with the same speed. However triple expansion was an great improvement over compound in fuel efficiency and saved the owners a lot in fuel costs. On the first of September 1887 it rescued near the port of Dunkirk the crew of the fishing boat Agneau de Dieu. In 1889 a refit took place at North Eastern Engineering of New Castle but crew and passenger capacity remained the same.

On 20 May 1900 it ran aground while entering the commercial port of Cherbourg but there is no damage. Then in December 1902, while on the way from Algiers to Le Havre, it looses it’s propeller while near Cadiz. In this port repairs are effected and she continues the voyage on the 25th. of December. This company kept the ship until March 1904 when it came in the hands of Andrea (or Angelo) Parodi of Genoa, who gave it the name Spes. They sold the ship in 1912. The new owners were G. Messina of Genoa but the ship kept the same name. In 1913 another sale took place and now the new owners were S. Mangeri of Catania who gave her the name of Angelina.

While in their service the ship was torpedoed on the 1st. of June 1918 while carrying general cargo on a voyage from Malta to Tripoli. She was caught by the German submarine UB 68 (Heino von Heimburg in command) and torpedoed off Sicily near Granitola in the approx. position of 37.00 N – 12.00 E