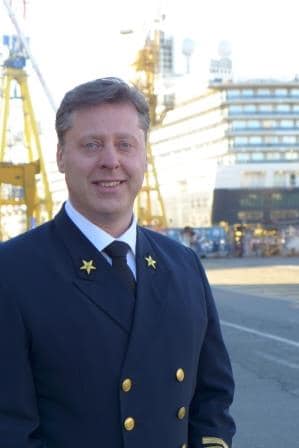 Capt. Emiel de Vries at the shipyard with the ms Koningsdam in the background. Shortly before the final departure. (Photo courtesy: Holland America Line)

Captain Emiel de Vries was born in the Netherlands and grew up close to the city of Amsterdam.

As he decided to make the sea his career he attended the Maritime Academy in Amsterdam, The Kweekschool voor de Zeevaart, which until its closure in 2000 was the oldest Maritime Academy in the world and a very large number of captains came from this Academy.

He decided to join Holland America and signed on for his cadetship on the ms Noordam in 1995.

After obtaining his license with a degree in Nautical and Technical engineering he returned to Holland America in 1997. He rejoined the ms Noordam but now as a licensed 4th. officer. In those days most ex-cadets returned to the ship were they started. It made the transition from cadet to an operating officer much easier if you were already comfortable with your surroundings and knew the ship. 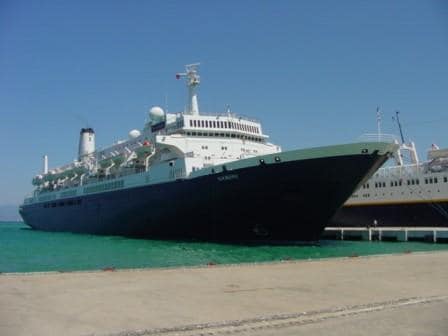 He then made a steady progress through the ranks, achieving command in 2011.  Since then he has been in command of the ms Rotterdam, ms Amsterdam, ms Zuiderdam, ms Nieuw Amsterdam and finally the ms Eurodam before being assigned to the new building of the ms Koningsdam.

During these years he met his wife, Susan, with whom he lives in Canada, in the town of Barrie together with their daughter.

In 2014 he was assigned as designated Master for the ms Koningsdam and thus had to change his work at sea, for work on land in the Italian shipyard of Fincantieri in Marghera, Venice. Building a cruise ship from scratch, as is the case with the totally new concept such as the Koningsdam, starts far before the actual construction takes place. Hence he has been involved with the ship from the initial planning stages since 2014. In this way he was able to give his input and use his experience to bring forward the best design possible. One of the results is a totally new concept of bridge design which is now proven so successful that it will also be implemented on the new ships of the other Carnival Brands.

“With his knowledge, experience and dedication, Captain de Vries is the perfect choice to be at the helm when we introduce Koningsdam to the world,” said Orlando Ashford, president of Holland America Line. “Captain de Vries’ leadership and graciousness with both guests and crew will contribute greatly to the success of our new ship.”

About a year before the ship was due to be delivered Captain de Vries arrived at the shipyard with a core team of officers which expanded to larger and larger numbers the closer the time came to delivery.  As such he was on board during the Sea trials of the ms Koningsdam a very important step in the completion of the ship. The ship itself was not yet finished on the inside but far enough advanced to do the testing if everything operationally was working. The ship performed much to the satisfaction of the captain and even better than the Company and the Shipyard had hoped for. Which is always a good omen for the future. 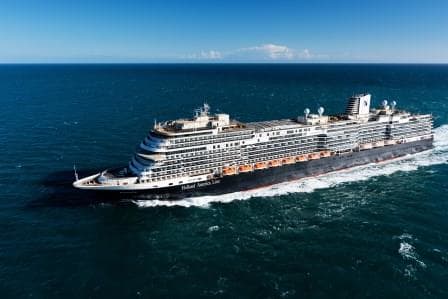 Sea Trials in Feb. 2016. The captain was very happy with how the ship handled. (Photo courtesy: Holland America Line)

The function of a captain can be fairly quiet if the weather is nice and everything goes according to schedule. However with completing a new build this is not the case. The days before the delivery were extremely hectic and the coordination of getting 1039 crew on board and into routine, the shakedown cruise from Venice to Rome took many, many meetings, outside the core responsibility of Navigating the ship safely. 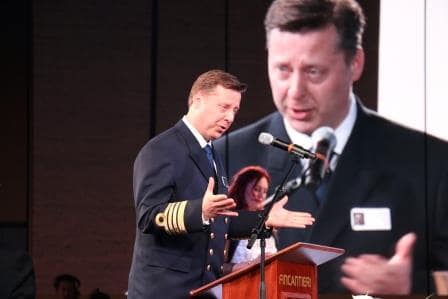 As is normal with the modern cruise ships, the ms Koningsdam has not been formally christened yet. This occasion with take place on 20 May in Rotterdam, the original home port of the Company. Who will do the honours is still a tightly held secret. 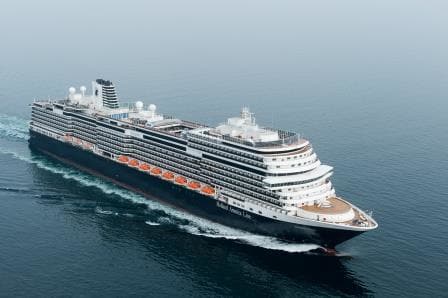 “It is an honor to be named the first captain of the new Koningsdam, and I know bringing out the ship will be one of the highlights of my career,” said de Vries. “Being at the shipyard has enabled me to gain detailed insight into many areas of the ship, and I look forward to welcoming the first guests on board during the inaugural season.”