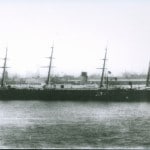 She commenced her maiden voyage on 14 September 1871 sailing from Liverpool to New York. The ship was a very fast one and on 19 January 1873 she won the Blue Riband after a record crossing over the North Atlantic (Eastbound) in a time of 7 Days 15 Hours and 9 Minutes. (Making 15.09 Knots on average). The record was taken over by another ship in September of the same year. After 10 years of service, newer and faster ships were taking over her role as a North Atlantic Greyhound and she became of less importance to her owners. This resulted in the ship being chartered out to the Inman Line. First in April 1883 two charter voyages and then between 1885 and 1887 the ship sailed in permanent charter for this company. At the end of the charter period the ship is laid up at Birkenhead in England on 3 May 1888.

Holland America was at that time looking for new tonnage and as they were not involved in the (speed) battle of the Blue Riband on the North Atlantic, this ship fitted very well in the existing fleet. Thus she was bought on 3 October 1888 by the NASM for £ 32,000 and renamed in Veendam (1) 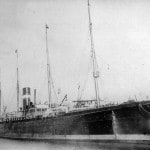 She left Rotterdam for her first voyage on 3 November 1888, sailing via Cherbourg to New York. During a refit in 1889 the ship received a new engine at the yard of the Nederlandsche Stoomboot Maatschappij in Rotterdam, the Netherlands. Installed is one four cylinder triple expansion engine giving 3,300 Ihp. Which gives a speed of 15 knots. Although the speed produced is the same as that of the old engines, the new engines used a lot less coal. 40 tons a day against 58 tons previously a saving of nearly 30%. The passenger accommodation is modified to 80 First class, 90 Second class and 800 Third class. A year later electric light is installed.
On 6 February 1898 the ship hits a submerged wreck while on a North Atlantic crossing. The propeller shaft breaks and the ship takes on water. All passengers and crew are saved by the American passengership St Louis and landed in New York. The ship is set on fire by the crew and sinks on 7 February in position 49.19 N., 019.47 W.

Note: In those days hitting an abandoned and most often partly submerged wreck was not unusual. Woodens ships did not always sink after a mishap and if only burned out, the under water part could survive for a longer time and thus be a considerable danger to navigation. Therefore when a ship was beyond salvage it was considered Good Seamanship to make sure that the ship really sank, by fully burning down the mostly wooden upper parts. This to take away any buoyancy that the wreck might still have. Then the sea valves were opened so that the lower part of the hull sank to the bottom of the ocean. The Veendam herself was involved in a situation like this. A situation of what later caused her own demise. On 25 November 1897 a schooner called The Elite was sighted, dismasted and abandoned and with only one foot of freeboard (amount of hull above the water) visible. As the sailing vessel was abandoned, completely waterlogged and on the North Atlantic steamer track, Captain Dent of the Veendam ordered the Elite to be set on fire as she formed a danger to other ships. During that same voyage the Veendam also landed in New York: 28 First Cabin, 46 Second Cabin and 395 steerage passengers. All of them coming from the Maasdam (1). The Maasdam had developed engine problems 500 miles west of Plymouth heading for New York. With the forward cylinder of the main engine not working she had been forced to return to Plymouth and the passengers were transferred to the Veendam.