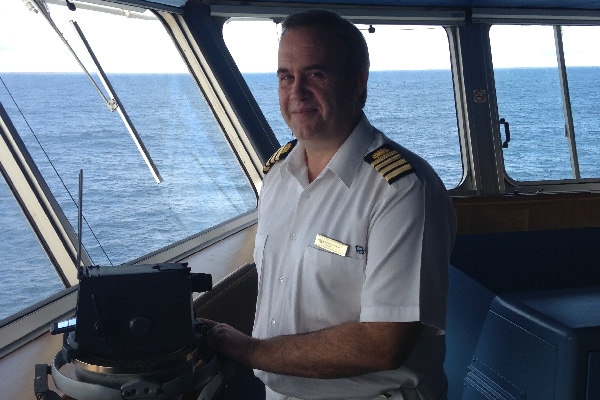 Captain Chris Norman while on the bridge of the Pacific Eden, ex Ryndam.

Chris Norman grew up in the North West of England spending most of his formative years working and playing on board family owned commercial fishing and workboats.

A career at sea commenced as soon as he left school and the next 13 years were spend predominantly in the fishing industry working in the waters of the North Atlantic.

With a downturn in the European fishing industry a change was required and he turned to the Merchant Navy to continue his career at sea.

Initially working ion Offshore Oil Industry vessel whilst gaining sea time and attending nautical colleges in the UK to further his qualifications. In 1999 Chris joined Holland Americas as a Third Officer and spend the majority of his career here working on many of the company vessels.  His first command came in 2014, when he was assigned to the ms Veendam.

He was part of the teams which sailed the ms Statendam and ms Ryndam over to Australia when they became part of the fleet of our sister company P&O Australia. Once those ships were up and running, he returned to Holland America. He now resides in Vancouver and spends his off time with family and sailing on pleasure boats or refurbishing an old wooden West Coast fishing boat.