The ss Warszawa was one of the smaller ships of the company. Small in the context to the large ocean liners were also small compared to the nowadays cruise liners. The Warszawa would have fitted at least 5 times inside the largest company ship in 1920, the ss Rotterdam IV. She was also a peculiar ship in the company’s history. It was the first and the last ship which the company acquired to sail purely on coastal voyages and into the Baltic where HAL had never ventured before and would never do so again either. So why the ship?

Before the First World War most emigrants arrived in Rotterdam by train from the inlands of Poland, the South East of Germany and the north of what is now Romania and Bulgaria. Due the change of the political landscape after 1918 this was less simple than before. It gave the company the idea to send a ship to ports which emigrants could more easily reach and then bring them to Rotterdam for the regular ocean crossing. 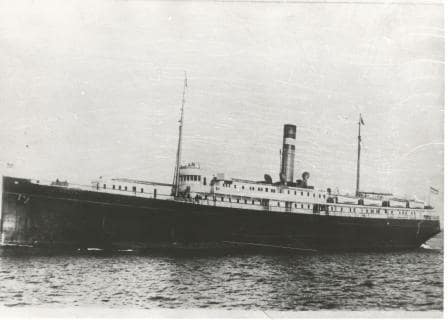 The ss Warszawa as she looked when entering service for Holland America with the main deck extended.

For this purpose a coastal passenger ship was bought in New York, the ss Madison. Built in 1910 with a capacity of (3,734 Brt. 256 First class 12 Second class and 243 Tweendecks). It had been especially designed for short voyages along the East coast of the USA with a maximum stay of one or two nights on board. The average speed was around the 15 knots which was quite high for those days. Unknown is why the Old Dominion Line wanted to sell it. Either the price was good or they made a mistake as later on it was the same company who bought the ship back.  With the decision been made, one of the younger company’s captains, Anthony Dekema, was send over to collect the ship and she was duly handed over on the 16th.  of June 1920.  In the company records it is indicated that she made the crossing under her old name ss Madison and after arrival on Rotterdam on the 5th. of July was flagged in. It is currently unclear if there was an American crew who sailed her over or that Capt. Dekema received dispensation to command an US flagged ship which had been sold already. 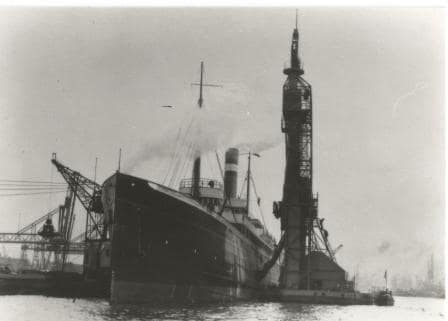 Frontal view of the Warszawa while taking on coal in Rotterdam.

With the registration she received the name Warszawa, a name not ending on DAM as was the company tradition. A name which the emigrants (and the local officials) would be able to pronounce a lot easier then Dutch tongue twisters such as Spaarndam or Werkendam. Plus it must appealed more to them as it was a name they would know very well. Warszawa being the capital of Poland. The ship was given a small refit which saw an extension of the main deck and the moving of the 2nd mast further aft. 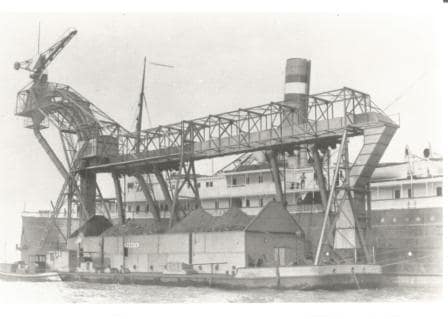 Another view of the ss Warszawa at the coaling station. There are very view photos of the ship available,

On the 31st. of August 1920 she left for her first voyage. The captain was now Jan Burger who had come in from the outside and remained her one and only captain for the six years during which she sailed for the company.  The first voyage, which became her regular route, went from Rotterdam to Danzig and back. Out and inbound the voyage went through the Kieler Kanal. Later on also the ports of Libau and Pillau were visited. A complete round trip lasted one week. Trade was brisk and the ship continued to sail, also through the cold Baltic Winter months, until 26 Oct. 1921.

During the winter of 1921/1922 she went into lay up as there were no emigrants. The company’s quota had been reached and the ship spent the whole winter in the Maashaven in Rotterdam.  The reason for this was the introduction by the US Congress of the Dillinger Quota Act in 1921. This resulted in a large reduction in emigrants which were allowed to enter the USA. The American Government was struggling at this time with the re- integration of the large number of soldiers which had returned from the war; a down turn in the economy and the large number of emigrants which had arrived in 1918 and 1919. The quota was based on a percentage of the pre war arrival numbers of a shipping company. As an example if a company had brought over 50,000 emigrants during a certain year before the war, then from now on that number might be only 5% or 10% of the pre war total. For the shipping company’s this was a big shock as their business plan was based on a constant flow of emigrants to the new world.

On the 5th. of April 1922 the season started again with voyage 33 and the ship sailed the whole summer until 27 October 1922 after which it returned to layup. Just before Christmas one single voyage (nbr. 41) was made to Danzig. During the layup period the crew was employed on other ships and Captain Burger was send to the Meerkerk which belonged to a company (United Netherlands) in which Holland America participated.

The idea had been that the Warszawa would sail to the Baltic empty and would then return to Rotterdam with emigrants. However in 1922 this routine was interrupted as the ship took emigrants to Russia. On the 23rd of May the ss Rotterdam (IV) arrived at the Wilhelminakade and docked next to the Warsawa. At 8 pm. the whole dock area was completely closed off by the local police and 150 passengers, mainly men, were marched directly from ship to ship.

These emigrants were Americans from Russian heritage who were returning home to help with building up the country. Their voyage was sponsored by the International Socialistic Community and they had all signed up for two years. As skilled laborers their agricultural and technical knowledge was badly needed as the 5year plans of the USSR where not exactly working as envisioned.  Russia was in such dire straits that there was even a lot of hunger and deprivation in the country especially in the cities. All over Europe there were committees which were collecting money and goods to help alleviate the famine. There was also such a committee in Holland and the HAL offered to transport all what they had collected free of charge during this same voyage.

The Warszawa sailed the next morning on the 24th. and after calling at Pillau arrived on the 28th. of May in Petrograd (St. Petersburg) where everybody disembarked. The ship stayed there until the first of June and ten returned to Rotterdam via Danzig. In total 5 of these Eastbound Emigrant voyages were undertaken by the ship.

The westbound emigration did not go very well. The quota’s of the Dillinger Act where becoming tighter and tighter and in both the years 1923 and 1924 the ship made only one voyage. When the same happened in 1925 (voyage 44), the ship was offered for sale.  Its original owner the Dominion Line bought the ship in March 1926.

The ss Madison in approx. 1926 after she returned to her original owner.

Captain Burger left for the last time from Rotterdam with the Warszawa on the 25th. of April 1926 and safely arrived in New York on the 9th. of May. He and his crew then returned as passengers with the ss Volendam (I) to Rotterdam. To pay for the voyage the Warszawa had been carrying a cargo of Steel and Coal. The ship was renamed in ss Madison but she remained with the Old Dominion Line only until the end of the year and was then handed over to Gulf & Southern Steamship Company Inc. of Jacksonville. This company was liquidated in 1928 and the next owner was the Eastern Steamship Lines Inc., of New York. In the 1970’s also well known for cruises from Miami to Nassau. The Madison continued to sail along the East coast of the USA until the Second World War.

Then she became a troop ship on the inter island service. First in the Pacific and later on in the Caribbean. She was finally scrapped in 1947 at Boston by the Boston Scrap & Iron Company.

The Warszawa was the subject of a rather peculiar part of the company’s history sailing in an area where the company was not at home and using a name which did not really fitted in the naming cycle. Was this done on purpose to show that this was not really a ship which belonged to the company or was it indeed an early from of PR and marketing towards the emigrants?

Those emigrants to Russia also leave an unfinished tale. Would they have ever returned to the USA? Or did they find their promised land of ideals come true?? 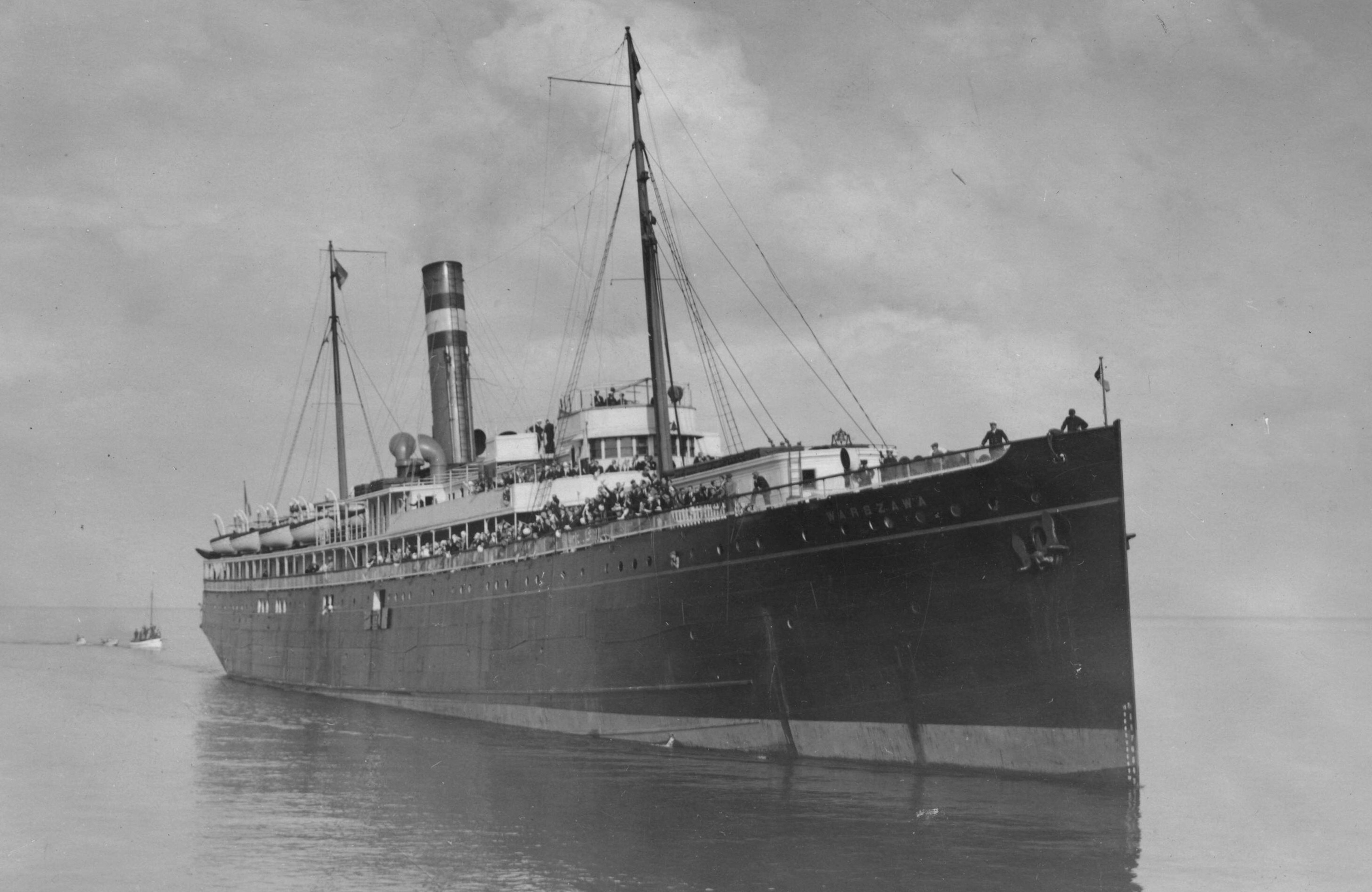 ss Warszawa. An impressive bow shot which made her look a lot larger than she was. (d)