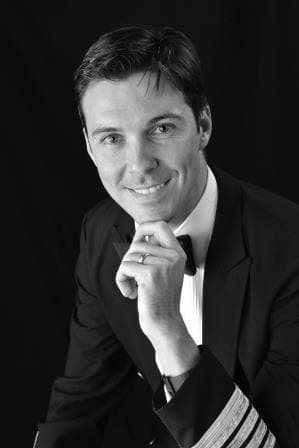 Steven Albert Macbeath went to sea in 1998, sailing on cargo ships. Here he reached the rank of Chief Officer in 2006. A year later he joined Holland America and started as a 3rd officer. This might seem a big drop in rank but as the cruise business is not compatible at all to the cargo trade, it is not a bad thing to do. Experience gained before will help with a fast promotion later as soon as you get the feel for how a cruise ship operates.

He was promoted to Chief Officer (the function was later renamed to Staff Captain) in October 2011. Highlights of his career included being part of the ships team when the Veendam went through a 37 day dry dock in 2009; when the so called Signature of Excellence program was brought on board to upgrade the ship (built in 1996) to the latest Holland America Line standards. He was also assigned as Staff Captain to the Koningsdam after the inauguration on the ship in 2016.

Steve Macbeath was promoted to Captain in August 2017 and will spend his first year doing fill ins on the fleet. Thusfar he has been assigned to Oosterdam and Prinsendam. Based on the scheduling it is expected he will get a permanent ship in June 2018.

He lives in Scotland with his wife and 2 sons, one of 5 years old and one of 11 months.

This was the captain’s first ship when starting his career: The Chiquita Belgie. A Banana boat sailing for the wellknown Banana brand Chiquita. Also Banana boats sailed from all areas in the world, most of the Chiquita ships were concentrated on regular roundtrips on the West and East  coast of Guatemala and Costa Rica.