Although the Europe season is drawing to an end, that is the high season, as some cruise ships will cruise the Mediterranean all year around, it was still busy in port today. Azamara Journey, Nautica, Brilliance of the Seas and us made sure that all the cruise docks were full. Only the “over spill” dock, the container terminal on the other side of the port was not used and thus a container ship was alongside. We were the only ship who had a change over today and thus we were parked at the big cruise terminal. This one has two jet walks as at the airport so guests can go ashore without being touched by the elements. Those elements were quite benign today and the chance of showers forecasted did not materialize. At least not over the port. If there are more cruise ships in port with a change over, then the port authority uses the pecking order system and the largest ship gets the best terminal. There are two more terminals, which are much smaller and are basically semi-permanent marquis structures. For the container terminal which has nothing, they bring in a large marquis which can accommodate 500 to 600 people. Nowadays a necessity as all those boarding people have to shuffle through security screening and that is not very nice if it rains. And coming off the ships, the suitcases should preferably stay dry as well.

Although I do not know the exact number but it looked like half the ship was doing a back to back cruise (CVG or collector voyager guests in marketing speak) and although quite a few ventured into town and into Rome, a very large group remained on board. Going to Rome today was more of a challenge than usual as part of the train journey was covered by buses due to rail road works. 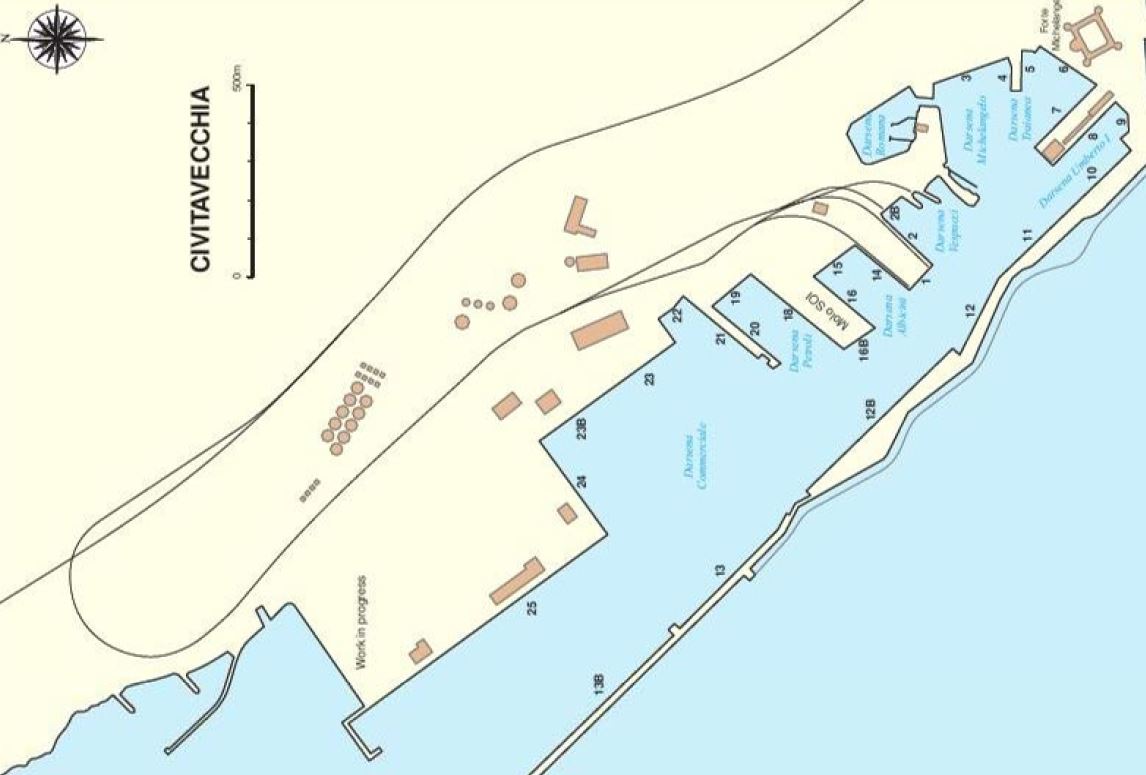 The port of Rome, Civitavecchia. During the Roman Empire days it was the port of Ostia but when that silted in, Civitavecchia rose to prominence. We were at dock 12 B  but ships are docked all along the break water on a busy day. We all try to dock with the nose out. Partly for a speedy departure, partly to get out quickly in case of inclement weather as the port can be exposed to some very bad storms.

As I mentioned yesterday, Mussolini ensured that the trains ran on time, but I am not certain if he also focused on the bus system and thus everybody was warned that there could be major delays. Those who went by Ships tour had a good day as those tours were back earlier than normal. It is a sort of standard happening for our tours to come back late as they have to go with the flow while leaving Rome and that rush hour flow in the afternoon does not always flow easily for a large coach. One of the reasons most Italians in the big cities race around in very small cars. A very small car (like the Fiat 500 or a 2 seater Smart) also has the advantage than you can park them sideways in the parking space, which then can take two of those little cars. How this works for paying the parking fee I do not know, but you do see it a lot in and around Rome. 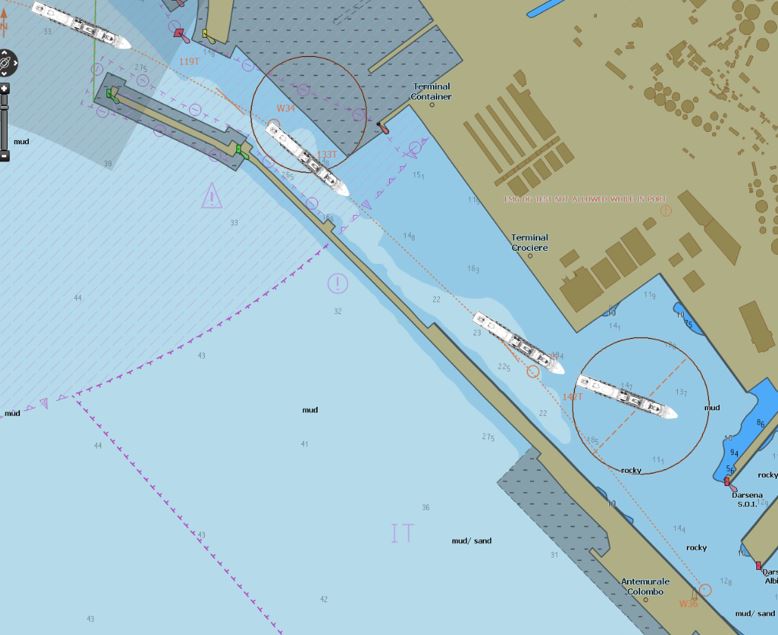 The approach plan of a HAL ship into the port. First simulated and pre-plotted on the radar, then discussed in detail with the whole bridge team and then executed accordingly.

All cruise ships like to arrive at Civitavecchia at nearly the same time as everything is scheduled around the full day tour to Rome. So the pilots keep up a very high pace with getting on board, swinging the ship around and then docking the ship. It is of course nice to have a fast pilot but even if we have the fullest confidence in them, the Captain of the Ship remains responsible at all time. Thus each port approach and departure is meticulously planned before we even get close and if the pilot does sail the ship into port (we very much prefer to do it ourselves) then the captain and his team can compare what the pilot does step for step with the developed approach plan for the port. Below you can see the preparation for a port approach made in the computer and when the real thing happens everybody knows that we are in good shape as long the real motion of the ship mirrors the pre- planned track. Once the ship is in the turning basin, the pilot often initiates the turn and then hands over to the captain or his designate for the docking. Not often the pilot is already leaving the ship via the sea side pilot ladder while the ship is still busy with tying up the final ropes and landing the gangway. 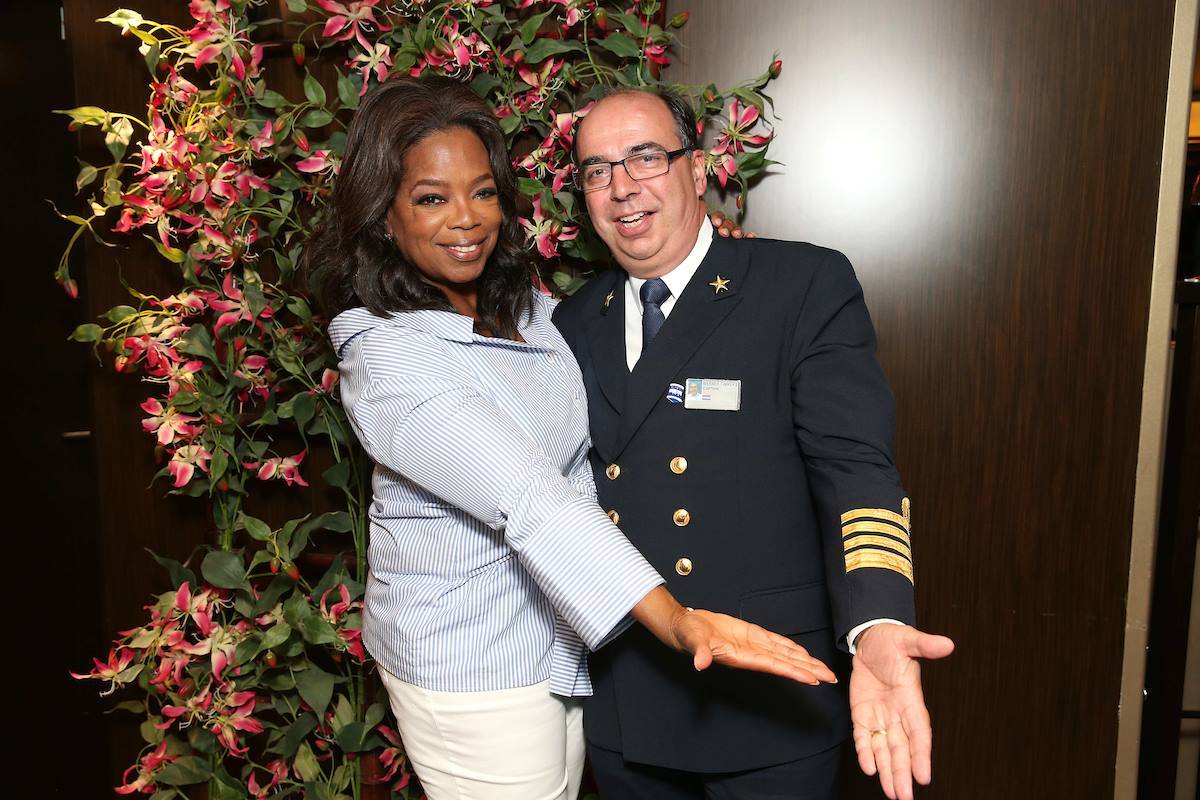 Captain Werner Timmers. The lady to the left likes to smash champagne bottles against ships hulls, so we let her dedicate the ms Nieuw Statendam in February of this year. This photo was taken last year when Oprah made a cruise to Alaska.

The Master of the ms Koningsdam is Captain Werner Timmers. He joined Holland America as a cadet in 1984 on the Noordam at the same time as I was there as 3rd officer. So we have known each other for a long long time. He moved to the Koningsdam after the first Captain Emiel de Vries moved ashore to take an office position and he has been with the ship now for quite a while. He will sail the ship across the Atlantic with the focus on having as little wobbly weather as possible, which we can do nowadays by having such good weather forecasts.

But first we have a few ports to visit before we sail through the Straits of Gibraltar. So tomorrow we have a day at sea and then we will visit two ports with one more on the crossing. 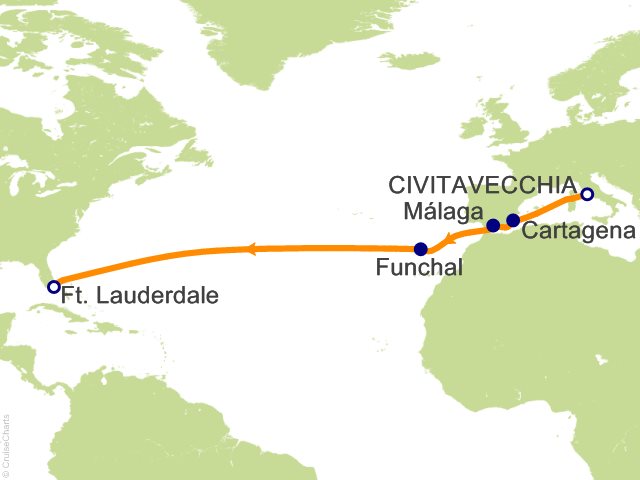 Our planned cruise. 3 ports and then a lot of glorious sea days.