To get to our first port of call on the straightest route possible we have two obstacles in the way, called the islands of Corsica (Corse) and Sardinia. But as they are islands there is water in between and that water is wide enough to sail through. It is called Boniface Strait or the Strait of Bonifacio. The old romans called it Fretum Gallicum and this translates in something like the Wild Waters of the Gaul’s. In the word Fretum we can recognize our English word of fretting or worrying about something. And that is a good word for this area as it can be a very nasty place. Strait Bonifacio which connects the Tyrrhenian Sea from the Western Mediterranean Sea can throw anything at a sailor that he/she does not like. It can blow a (local) gale here, it is full of shallows and nasty rocks, the currents are un-predictable and there is an almost 90o turn to make when going through the Strait. Therefore there is a pilot service available for those ships who do not have the most sophisticated navigation equipment on board and for oil tankers it is compulsory to take a pilot.

The Strait runs for a vertical distance of about 8 to 10 miles between coasts, depending on where you measure it but that is where it is covered with water, the navigable part is a lot less wide. But if you prepare properly then you can easily and safely sail through it and that is what the Koningsdam did late last evening. At night you also have the advantage that all the local shipping has gone to bed. Local shipping is fishing boats, Sunday sailors and the small ferries that maintain a regular service at the west side of the Strait between the two islands. In the past I have had a few times issues with those ferries as they had (at least at that time) a very creative way of adhering to the Rules of the Road; they did not adhere to it and when crossing did not give an inch. Also when going through during the day time, it can be busy with yachts and because the area has all these navigational hazards those tend to stay in the middle of the passage and that creates a bit of a challenge for the bigger ships. But the night is normally peaceful. 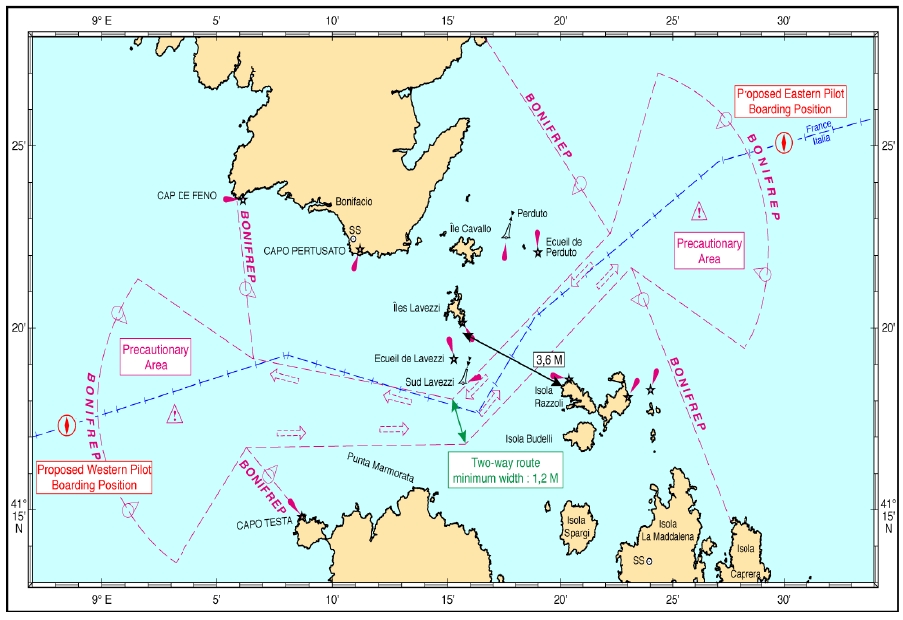 Charts and also the channel / strait is well marked and thus safe to transverse as long there is respect for the local dangers.

It did not stay peaceful for very long. The moment the ship cleared the Strait it became exposed to a gale blowing in the Northern part of the West Mediterranean and that created a bit of movement on board. Due to its size the Koningsdam does not really Pitch (bow up/down) or Roll (heeling from one side to the other) but it sort of wags its tail. My cabin this cruise is located at the stern of the ship and I had not been exposed to this sort of movement before. I really need to take a bad weather cruise on one of the largest ships out there (6000 pax. Ovation Class of RCI or the new Genting 9000 pax. Ships coming out) to see what they do. 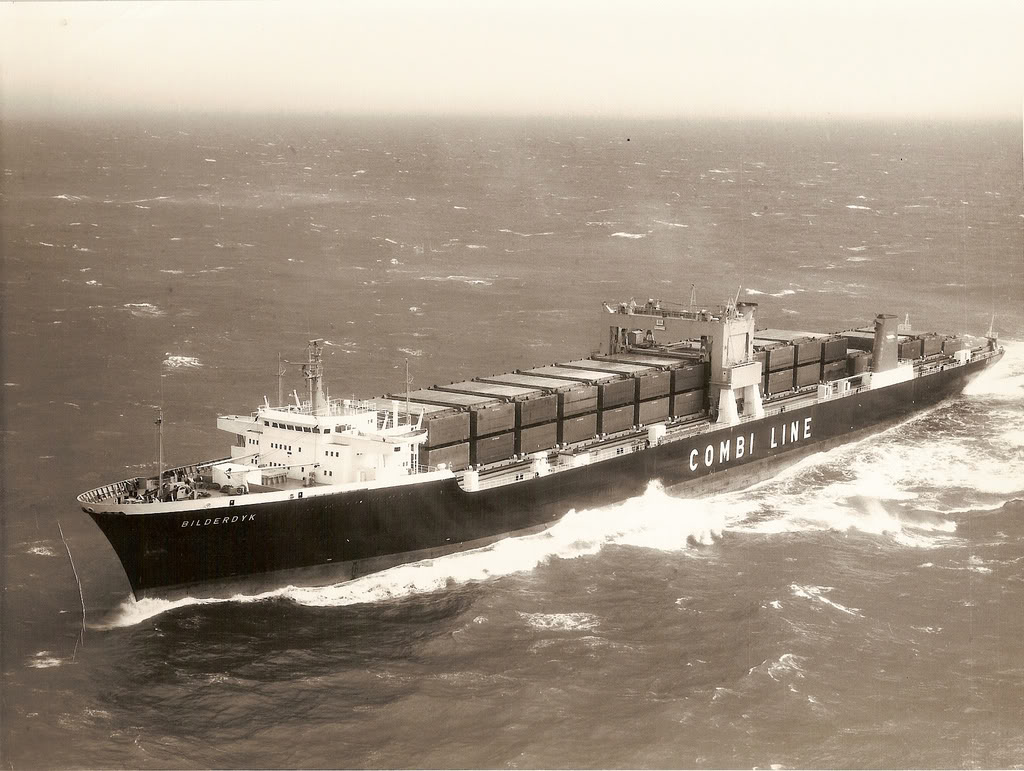 The ms Bilderdyk (II) of Holland America Line before the cargo fleet was split off in 1974. It could carry 89 barges  and maintained a regular service between Rotterdam, Bremerhaven, and USA ports such as Savannah and Houston. Using barges reduced port time greatly and that saved cost on the operation.  While the barges went up river, the ship would make another crossing to and from and then pick them up again during the next call.

Every ship is different and a super tanker with a 20 meter draft behaves completely differently than a cruise ship with an 8 meter draft.  We used to have in our company in the 1970’s a LASH ship (Lighter Aboard Ship) called the ms Bilderdyk. This ship could load barges via a crane and transport them from the big rivers in Europe to the USA and were then pushed to the final destination by tug boats. That ship was heavy and when full lay low in the water and then plowed as a sort of metal box through the waves. One of its captains (Capt. Grippeling) once said “I am a captain of a self-propelled brick” meaning that it did not move at all compared to the regular cargo ships. 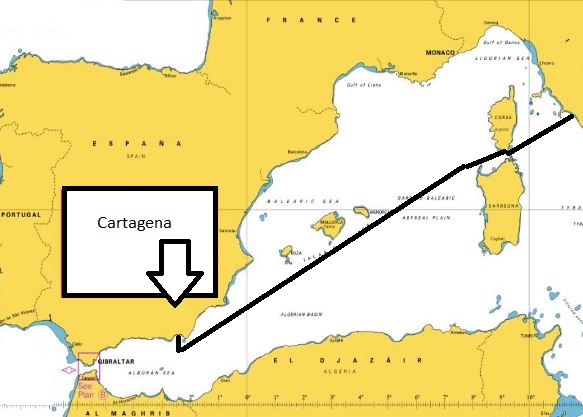 Luckily the gale passed by quickly and those who felt affected by it, had by lunchtime nothing to worry about anymore. For the remainder of the day we sailed south of the Balearic Islands of which Mallorca and Menorca are the two best known. And then tomorrow morning we will approach the pilot station at Cartagena at 07.00 hrs. And to be docked about 45 minutes later. We should be together with the Mariella Explorer 2 which should arrive an hour after us after having followed us from Civitavecchia.

In the meantime thoughts on the Navigation Bridge are already on the first leg of our North Atlantic crossing. There is a disturbance building up in the North Atlantic and it’s projected path will bring it down into the Gulf of Biscay. That is far to the North of Gibraltar but the wave field that it generates will come all the way down to the coast of Africa. The question at the moment is, how fast will that bad weather system travel and how quickly its wave field will travel down to us, when we leave the Straits of Gibraltar. Will it arrive before we get there, will it arrive after us; if it arrives when we get there is a way to out run it, etc. etc. There are options; and thus the Captain is thinking very deep thoughts about the best solution and the decision he has to make once the Koningsdam leaves Malaga.

Weather for Cartagena: A warm Spanish day with lots of sunshine 78oF / 26oC with a gentle breeze and a 1% chance of rain. Not a bad day to ride in an open top Sightseeing bus. 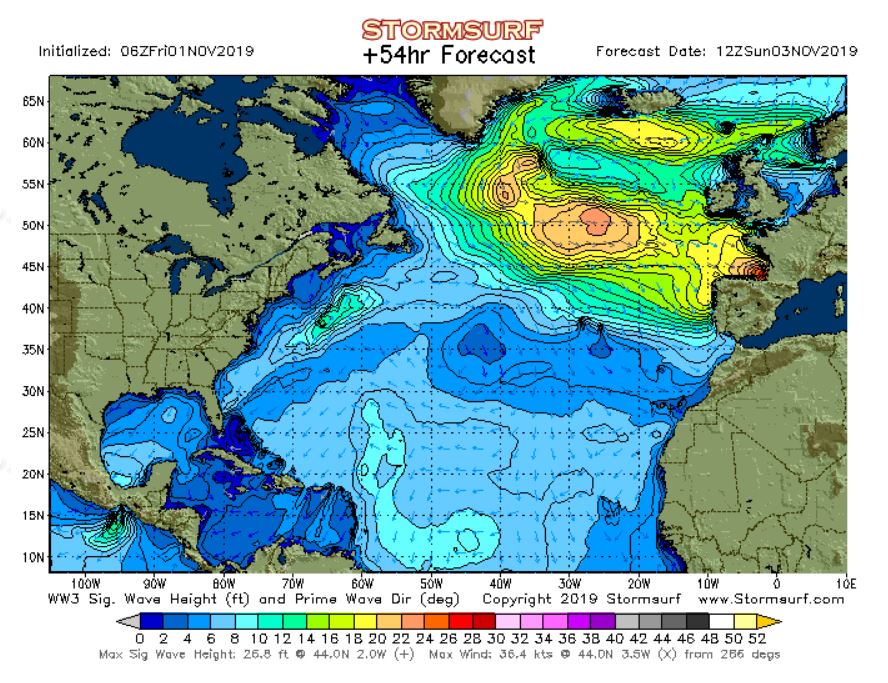 This is the expected swell son the North Atlantic around the time when the Koningsdam comes sailing through the Straits of Gibraltar.   So the question is will the green bit already have come to the Straits or is it is still on the way  and will we be able to sail in the blue bits.????