On our way to Naples we keep Sicily to the port side and then pass through the Straits of Messina. We can also go around Sicily and avoid Messina but it is a much longer route. Plus this schedule allows us to see the Straits of Messina in daylight and once we are through, we can see the Stromboli Volcano by night. This Volcano is active most of the time but the fireworks are not that exuberant, that it colors the sky even in daylight. Luckily with this schedule it works out just nice as it is an odd 35 miles to travel after leaving the Straits and by that time it should be nice and dark.

For our route we skirt the East coast of Sicily and stay about 12 miles out so we are at all times in International Waters as far as the shipping regulations are concerned. Territorial waters are 3 nautical miles from land but then locally governed shipping regulations continue for another 9 miles. The difference is that national regulations inside the 3 Nautical Mile zone (which is very carefully indicated on the charts) will vary from country to country and then up to 12 miles it are international regulations but which are administered by the country whose coast it is. Whether you live in a country which is a federation, like the USA, or the European Union with member States, a national law or EU treaty can be interpreted and implemented in local ways.  Once outside the 12 mile zone, that is more or less gone, and international rules apply which are the same everywhere. SOLAS, MARPOL. COL-REGS, etc.etc.  Most countries have signed these treaties and the regulatory execution is the same. And that makes life easier for all of us at sea. We already get a headache from all the rules that govern a port, and none is the same, so if we can avoid headaches at sea we will do so. 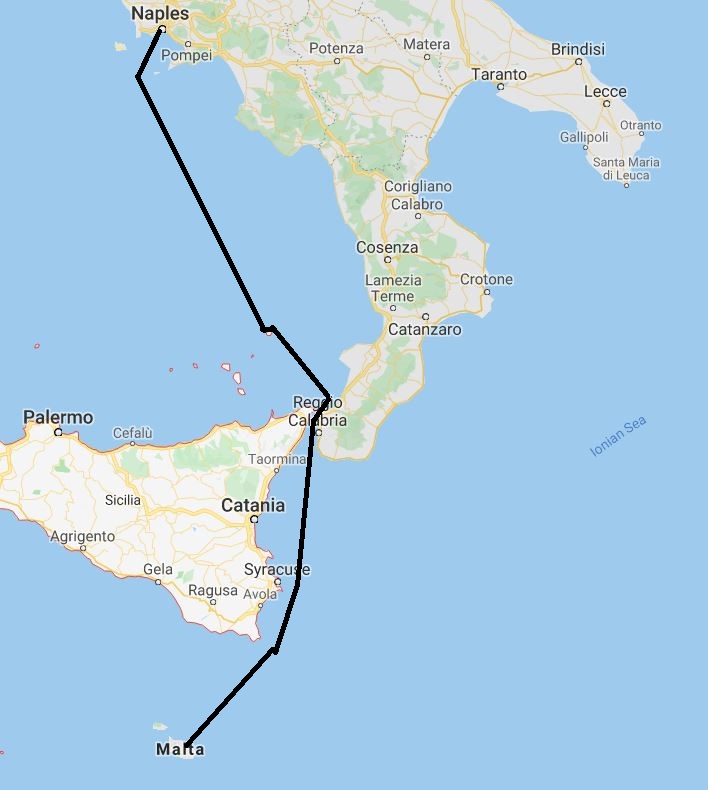 Our Route to Naples.. We had some hopes that the bow section of our newest ship the ms Ryndam (IV) would be coming by as it is being towed at the moment from Palermo to Maghera to join the rest of the hull but the tow had only just left Palermo.

Still with clear weather we could see the Sicilian coast very well and once we came closer to the Straits, we had land on both sides. Sicily to the West and Calabria from the Italian mainland to the right. The Strait of Messina is of concern to us for two reasons; a. the current can run up to four knots and can set us all over the place when making the two major turns and b: in the Current and in the Strait are fishermen that do not like to move and ferries who prefer not to move. 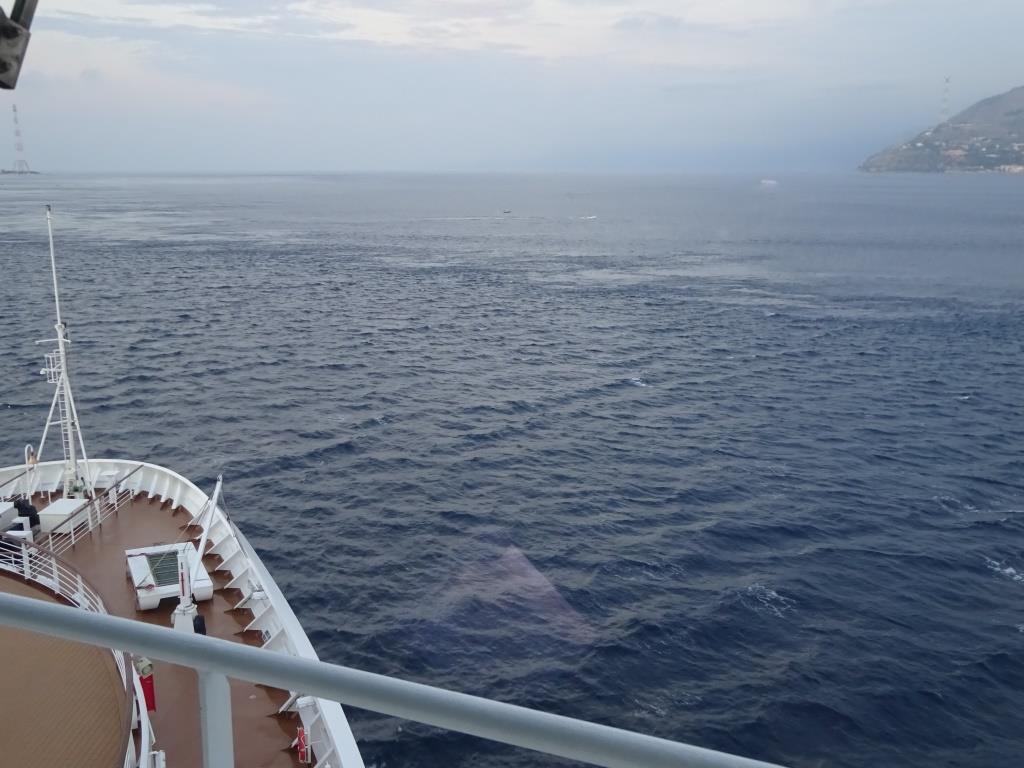 The rip of the current, and in it two fishermen. Barely visible and they just moved enough away from us to stay out of our path.

Today we went through with about 2 knots of current but the current rips were still considerable and right in them, almost on the course line, were our friends the fishermen. Of which the last two only moved out of the way after the pilot gave them a hoot on the toot. 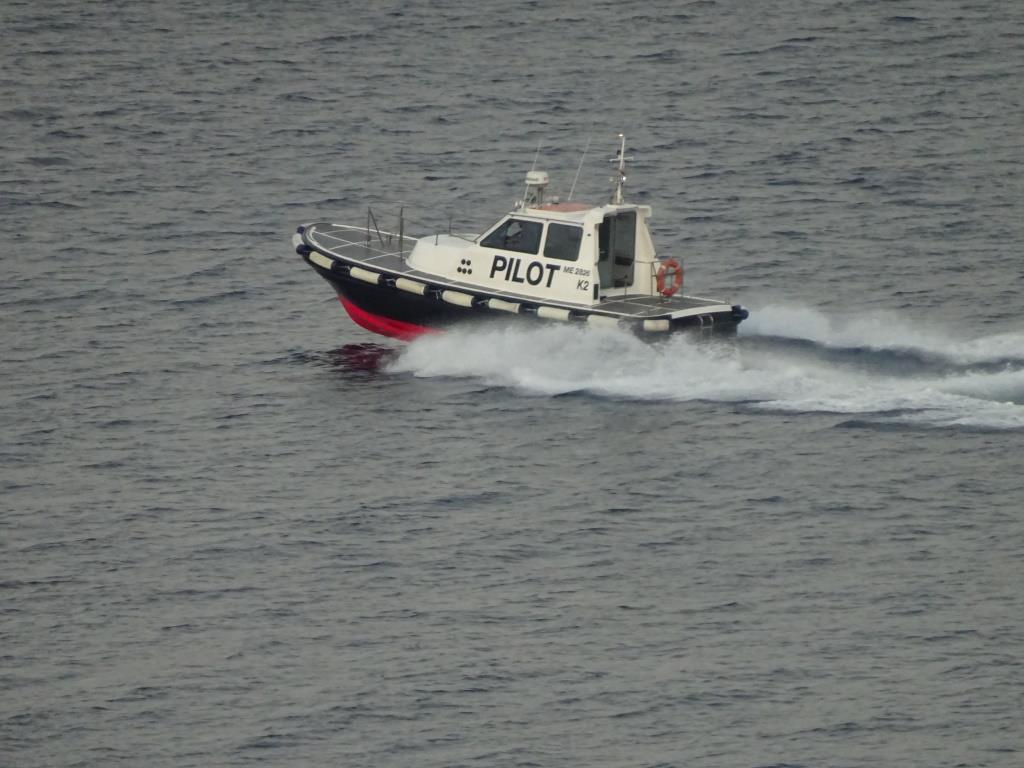 Palermo pilots. Holding the speed record for the fastest pilot to ship transfer. Instead of slowing down they like you to speed up. Today we did it with 16 knots but the pilot was not adverse to have done it with 18 knots.

Messina pilots are the fastest pilots there are. They jump on board while the ship is doing 16 to 18 knots (sometimes we wish that pilots in the rest of the world would come to see and learn this as in principle it is much safer than with 5 or 10 knots speed and having to make big lees) stay on board for 45 minutes while keeping up the ships speed, and then hop off again and go full speed to the next ship going the opposite way. On a busy day one pilot can handle 8 to 10 ships, depending on his lunch break in between. 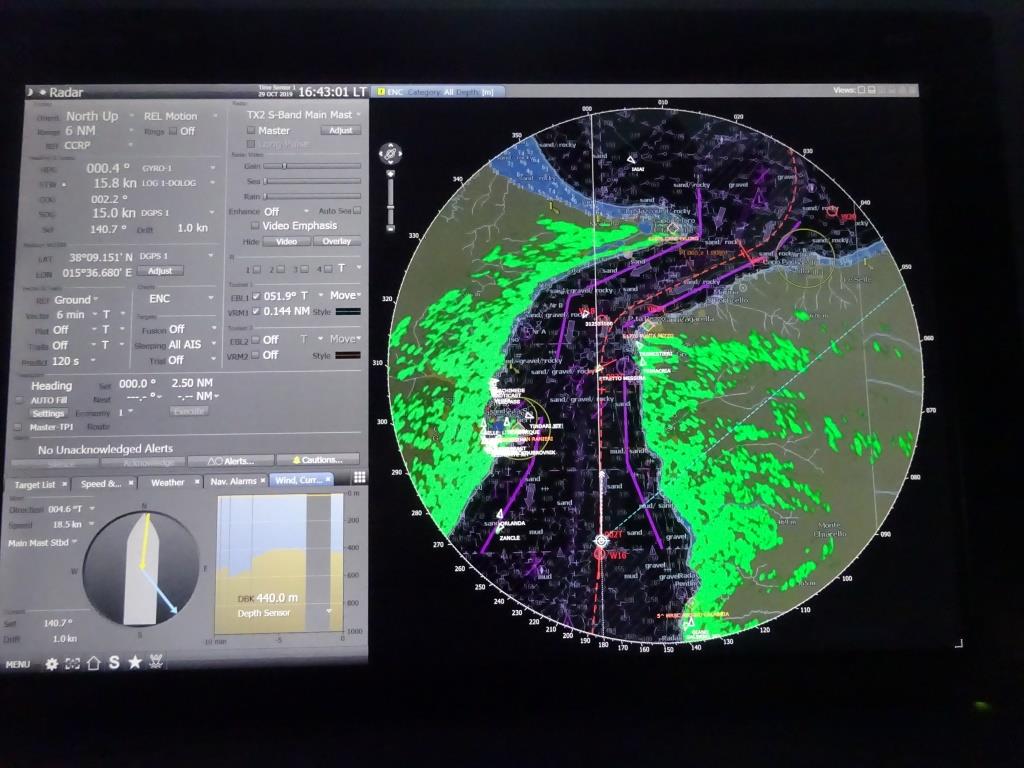 Approaching the Straits of Messina near the pilot station. It takes a S turn to get through and if the ship can keep up the speed you are through before you realize it. The white bits on the screen are the AIS echo’s of other ships, mainly the local ferries.

Depending on his preference the pilot will take the conn and give the actual helms orders but with the cruise ships they are often very happy to monitor the navigator once they have approved the dotted course line on the radar screen. Then they focus on the communication with the ferries and will only take over for direct course changes if the fishermen are in the way again. As far as I have understood through the years, most of the local pilots have also been involved with the ferries that cross Strait Messina on a constant to and from schedule and thus they know all the ferry boat captains which gives for very few issues when we are going through. The only thing that a passing ship has to get used to, especially when it is very busy, is that these ferries have to keep their time schedule as well, so their safe passage / clearance is a lot less than what a deep-sea navigator is used to.  While we like a mile if we can get it and half a mile if there is no other option, the ferry boat zips around us with 200 or 300 meters. That is in principle not un-safe but due to the perspective in size from our side, it looks very very close. 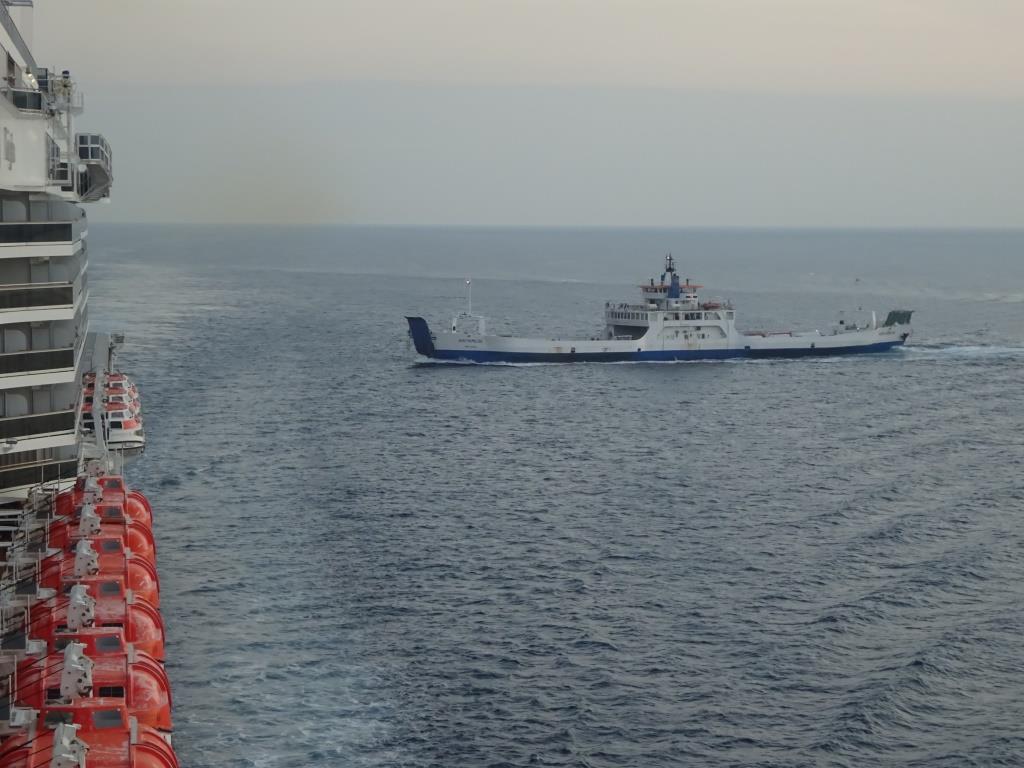 One of the car ferries crossing close behind our stern. The ferry stayed on a near collision course until about half a mile away and just changed a little to his starboard to clear the Koningsdam and at the same time not loosing any time on his crossing.

Tomorrow we are in Naples were we should arrive around 0700 in the morning. If we are going to be alone remains to be seen as the port cruise ships schedule indicates that there is nobody in port and we should have been in Naples on the 26th. So we will find out on arrival.

Weather: Partly Cloudy with no wind and no rain predicted and noon time temperatures on 23oC / 73oF.