To my utter amazement all went well with the flights and even my luggage arrived which was no mean feat as, although there was code sharing, it involved three airlines and a change over time of only one hour in Madrid. But by 4 pm. I was happily ensconced in my boutique hotel La Falconeria or the Falcons Cage after having been picked up by our agent in Malta. That was about the only part of my travel that I did not worry about as the Malta agent, together with the one in Copenhagen, have the highest ratings among the captains in the fleet. But the layover of 2 days gave ample opportunity to get over my jet lag, clear up all my administrative paperwork, and even see some of the sights as well. A number of years ago my wife and I spent a week in Malta so I rode all the bus routes of the island while she got pampered with all sorts of Spa activities which I did not even try to comprehend. So Malta is not unknown to me but I had still two things on my bucket list.

Malta has been around since the Stone Age and every culture has left some form of “I.D” behind by means of buildings or changes to the land scape. Because of its location in the Mediterranean it has probably seen more battles than any other country and has been occupied, governed or “looked after” by a large number of neighbors and or countries with Imperial Dreams. The last one, one was Great Britain and from that empire Malta went independent, joined the European Union  (and no they have no plans at all of leaving), adopted the Euro as currency and is now riding a wave of economic good times. 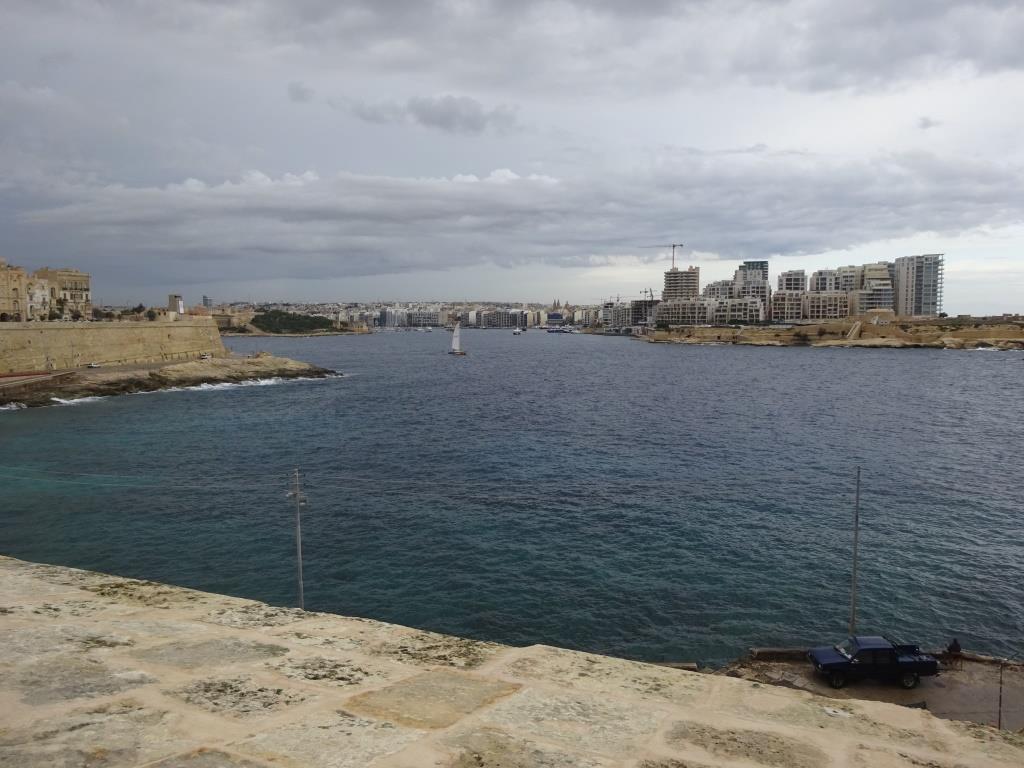 This area of Malta is called Sliema and is situated around its own bay but it is a sort of extended part of Valetta. Here a number of old hotels have been torn down to make room for apartment building’s  where a 4 bedroom one sets you back over 1 million euros.

Last year 20% of the GDP of Malta came from E-gaming or I gaming, companies who have gaming websites and have parked their headquarters with a lot of their programmers in Malta. As a result the house and apartment prices have gone through the roof. At the same time, the Maltese government is offering a Maltese passport to those who invest a certain amount of money in the country and thus a lot more investors have descended upon the island. The flip side of the coin is that for regular Maltese the accommodation is becoming very expensive and also that a certain element of shady business people has entered the country which gives the Government quite a headache. 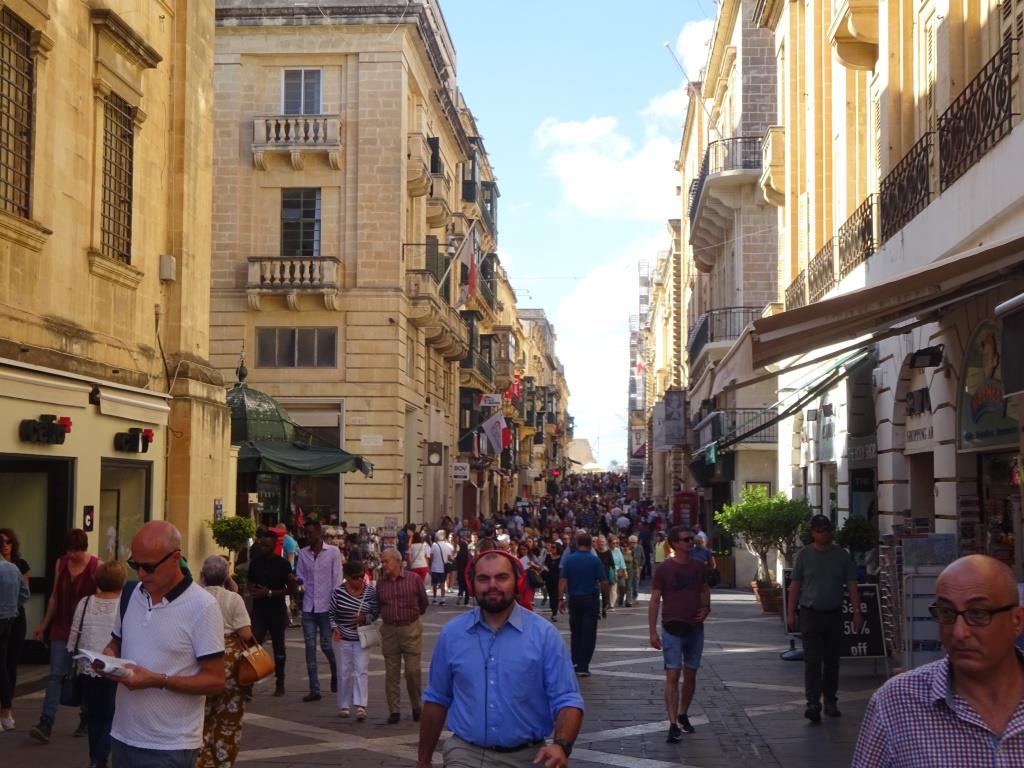 The main (shopping) street during day time. Although October it was still busy as the weather /temperature is very good for a visit. There were no cruise ships in when this photo was taken so the crowds came from somewhere else.

The main steadying factor of the 4 islands which make up Malta have been the Knight Templars which made Malta their main home after the end of their campaigns in the Holy Land. They are still there and are a huge organization which as a total of 120,000 members worldwide all involved in the hospital and care business. The fighting part of the Knights stopped around 1814 when it was realized that wars were becoming something totally different than what they had been involved in thus far. 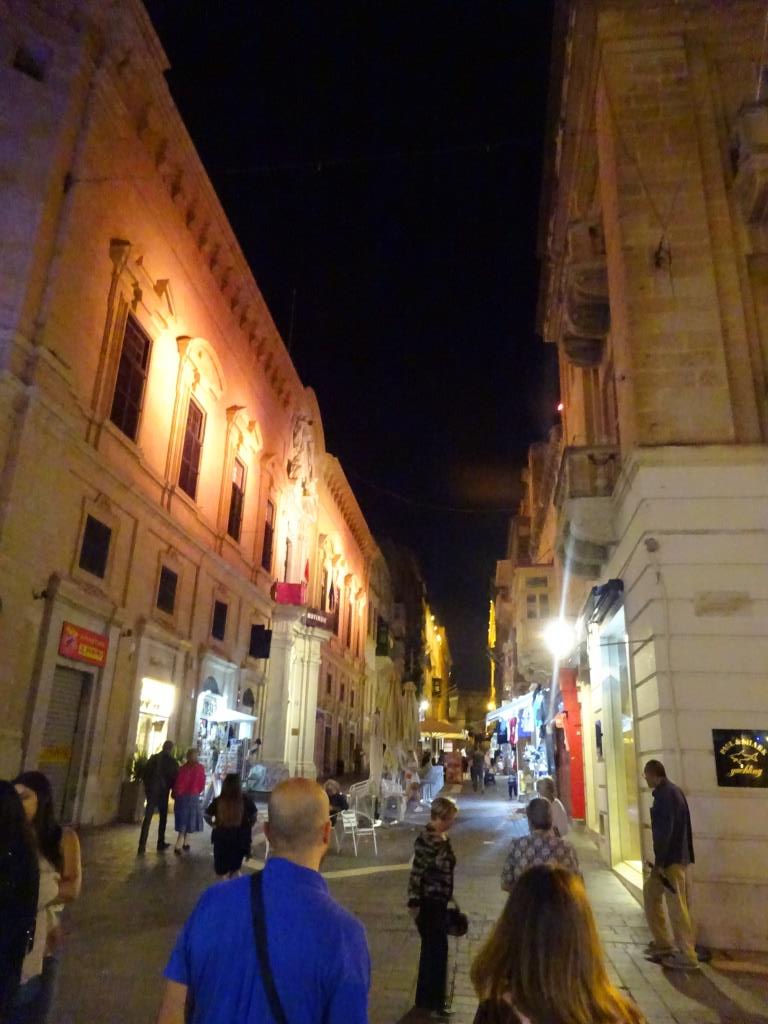 Same street by night. As everything is old (the archeological museum and the Templar Cathedral are in the same street) they have flood lights on most of the buildings creating a sort of perpetual Christmas atmosphere.

All these various countries and cultures have resulted in a very mixed population and language. With a bit of Northern Europe, a good dose of Italian and some aspects of the Arab Culture. The language is very much based on Arabic but is written in western letters. As English was the last major influence, this inheritance is still visible in the many monuments, driving on the wrong side of the road (were possible as in most streets you can only drive in the middle and are thus one way streets as they are so narrow) and the legal system. The locals never learnt queuing from the British so I experienced it several times that a dear old lady or ignorant brat simply pushed ahead of me because I left a small gap in the line. 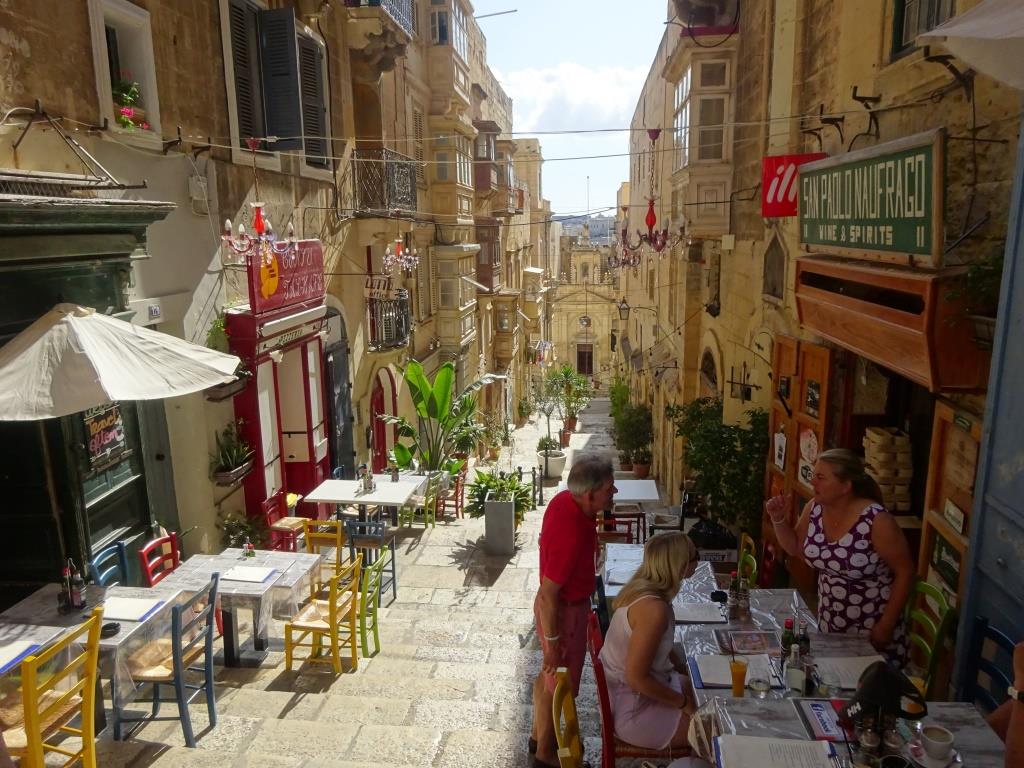 One of the side street restaurants. This road leads down to the harbor

While here I wanted to do two things, first of all walk the cities Battlements and the outlying suburbs and secondly visit the Catacombs of St. Paul in Rabat. There are a lot of catacombs and underground shelters some of them constructed as late as the 2nd. World war, but I could not get in St.Pauls last time as the line with tourists was too long. This time I was there the moment they opened and it was another 45 minutes before the first tour arrived. When I go somewhere I like to do my homework first so when I started chatting to the guide, he was quite happy to spend some time with me as I knew all the basic stuff already that he normally has to repeat over and over again. These catacombs go back to the Roman times and there are traces from even before that period. It is not just one system but several that a separate or maybe connected as they are still finding new tunnels. It is estimated that the total tunnel system runs for about 200 miles, if their guess is correct about what still has not been explored and documented yet.  That took care of the morning and jet leg took care of the afternoon. The next day was a rainy day but good for walking and climbing up and down the streets as Valetta is built on a hill courtesy of being a fortress town. 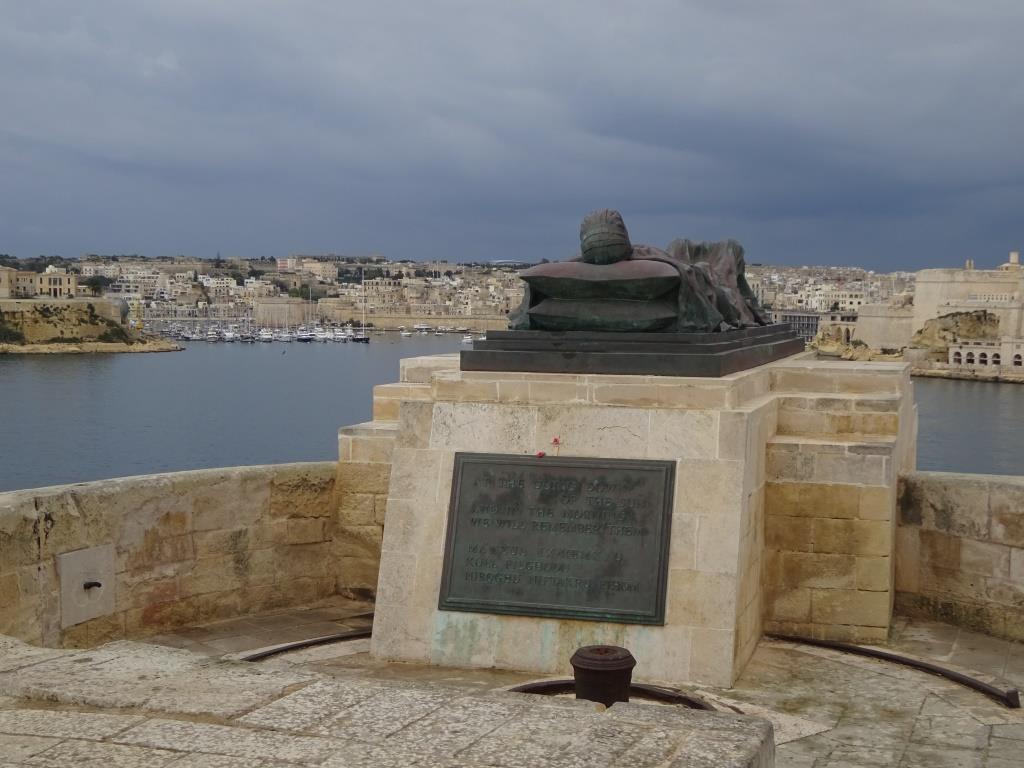 The Valetta War Memorial 1940 – 1943 overlooking the Grand Harbour of Valetta. The inscription reads : “At the going down of the sun and in the morning we will remember them”. both in English and in Maltese. Behind it is a bell tower with a number of other dedications which was added in 1992. The memorial itself is a laying figure in bronze

Due to the Mediterranean climate most of the life in Malta is lived out doors and restaurants are often bigger on the outside then on the inside. In the late afternoon and evening the main street of Valetta (Republic Street) and the streets around it turned into one big open restaurant which caters for every taste. I am no gourmet so my interest was more in finding a nice pub and that took a bit of searching as there are plenty of cafes and restaurants but very few places for a good glass of beer and some local atmosphere. 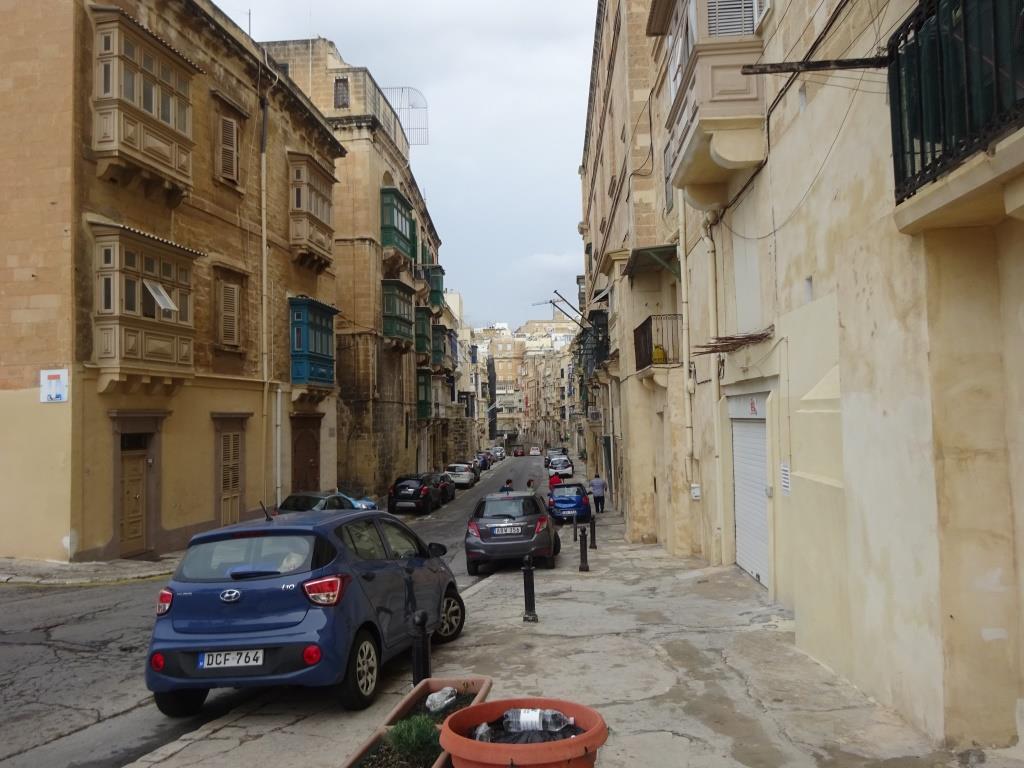 This is the way most of the roads in downtown Valetta look like. Narrow with high apartments on either side. They provide some shade in the hot summer months. Parking is a problem  and most cars are small unless the owner happens to have a garage. If so then most likely it used to be a horse and stables from the old days or a shop  or small factory space no longer in use.

But there are two. One is called The Bridge because their tables and chairs spill out over a bridge over a road and up the steps towards the main street; and the other one is The Beer Cave which is right in down town opposite the Stock Exchange but not really visible as it is deep inside a 450 year old dungeon. Both have a large range of domestic and foreign beers and have live music in the weekends. Because the focus is not on drinking but on the quality of the beer selected, these places always have an interesting mix of people from many different countries and various walks of life, so it does not take much time to have a good conversation with somebody totally unknown but with a story to tell. I solved all the world’s problems in about 30 minutes with a lady who was born in Poland, grew up in Australia, studied in the USA, is now living in Bristol England and had developed a taste for Belgium Beers. And she was not the most unusual person present. That honor went to an old gentleman who had lost his passport back in 1953 and decided not to get a new one. They say if you want to progress, you have to think outside the box. This gentleman had lost his box long time ago (*) and lived accordingly still with a razor sharp mind. Because of his interesting character and conversation skills he was able to spend the whole evening on free drinks, of which he consumed an alarming number, without any apparent effect. 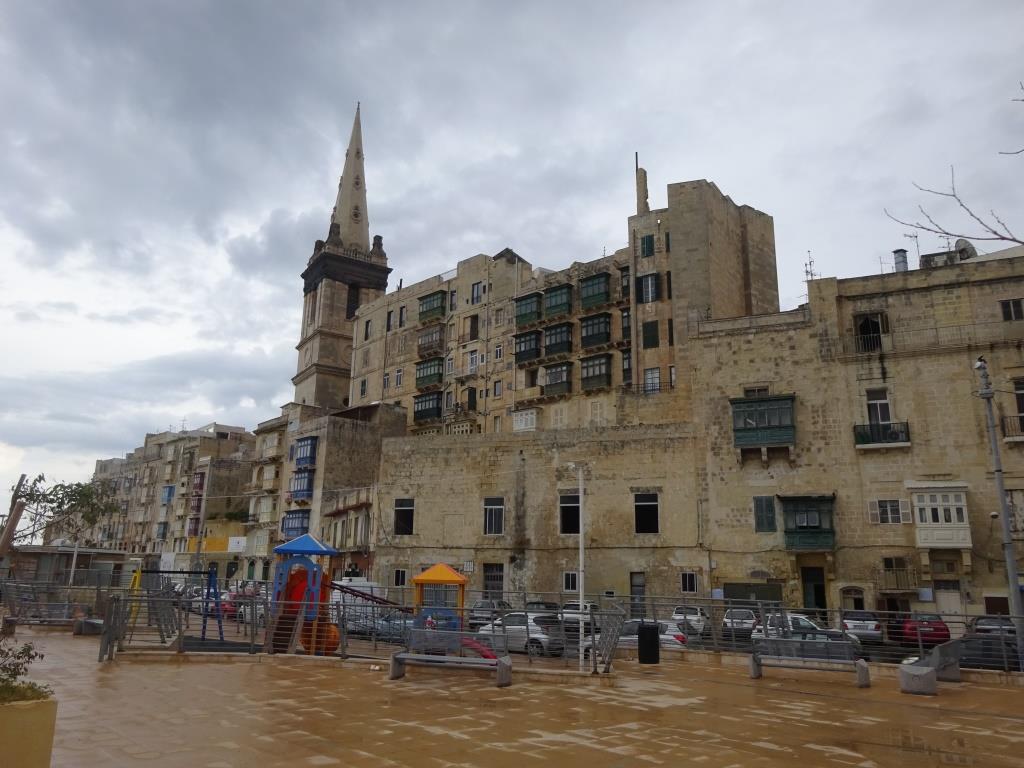 This is the North point of Valetta. it looks as if the apartments are as high as  the church. This is not the case as they are built against the hill of Valetta. So some exit on the level where the photo was taken, some halfway up and some at the other side where the entrance is level with the top of the hill.

So for those who have Valetta still on their bucket list and have the time to stay a few days, my advice is GO; but do your homework first otherwise you will enjoy the place but not really understand it. Too many interconnecting layers of history and culture. If you only have one day, first do a panoramic tour and then select one main item to see, otherwise it is too much. They warn against drinking the water. Although it is treated sea water and thus safe they are not so sure about the plumbing. I only found that out this morning and it did not affect me; but then I go out and eat shrimps in Nicaragua, so I suppose that I have built up a bit of resistance.

The good ship Koningsdam arrived nicely on time and towered high about everything in the harbor by being by far the largest ship in port. Tomorrow is a sea day, followed by Naples and then the final port of call Civitavecchia. There she will start a 14 day Trans-Atlantic to Fort Lauderdale.

(*) Maybe the box went together with the passport.