This is cruising at its best. It is not too warm outside, courtesy of a cool north Atlantic breeze. The sun is shining and it is a following wind and thus the relative wind on deck is nothing more than a gentle breeze. I wish we could have this during every sea day. Yesterday on departure we saw flying fish around the ship, (and quite a few of them directly eaten by Black Starlings) and today the flying fish were there again but no Birds. It seems birds do not enjoy hanging around a ship with a following wind. Maybe it is too hard to fly or maneuver in the air if the wind comes from behind. 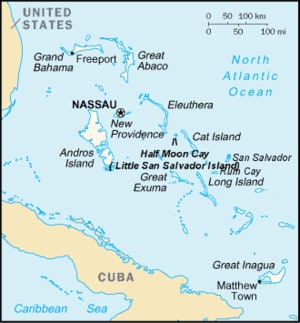 Half Moon Cay surrounded by other Bahamian Islands.

We are on the regular route in the North Atlantic Ocean and around 1700 hrs. today we were passing the Turks & Caicos Islands again. Now we will stay in open waters until early in the morning tomorrow when we sail between the various Bahama Islands and approach Half Moon Cay from the South. The  best known island in this region is San Salvador Island which is located just east of Half Moon Cay (which itself is part of Little San Salvador Island) It is one of the larger Bahamian Islands but away from the beaten track and not so easy to get to. Very famous for scuba diving due to the proximity of nice reefs and those same reefs also make it difficult for larger ships to go there.

If there was an easy way to get larger ships to the island, no doubt we would have built a pier there in the same way as on Grand Turk Island. Apart from the excellent beaches it also has the Columbus Monument. The island lays claim to fame due to the fact that Columbus discovered the New World here in 1492. If this is true I do not know because several other islands claim the same thing. For a cruise ship always a nice attraction to provide the guests with. But maybe not a place for Holland America to be as one of our previous Captains, Commodore Verhoog made a whole study about this in the 1950’s and came to the conclusion that due to the prevailing current Columbus must have landed somewhere else. And we have to believe our Captains of course so Holland America could possibly  not call somewhere where it was proven by one of its own Masters that it is the wrong island. The island has several little harbors and marinas but nearly the whole island is surrounded by an extended reef and that means a long tender service and a ship which is not sheltered by the island itself. Not good for a safe tender operation and Guest Satisfaction. 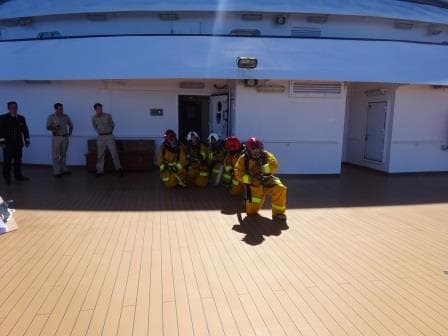 Two teams on deck, the forward one has the fire /water hose, the 2nd one the fire/foam hose.

None of the crew was bothered by all of this, as it was Fire drill time. Once a week the ship conducts, in accordance with Solas regulations, a First Emergency Response Drill. We always try to keep changing the scenario’s around to keep the interest and focus of our crew going. If you extinguish the same trash can every week then boredom tends to set in quite quickly. So today we practiced a Helicopter crash on deck. With the objectives: A. to save & protect the ship B. if possible save the people inside the helicopter.  I have been told that the new helicopters coming into service are less flammable and have better safety protection features than the ones before and thus we stand a better chance to help the occupants if something like this would happen. Thus far the helicopter pilots out there and the cruise industry have a 100% safety record and that is something to be proud about, but still we train and exercise. 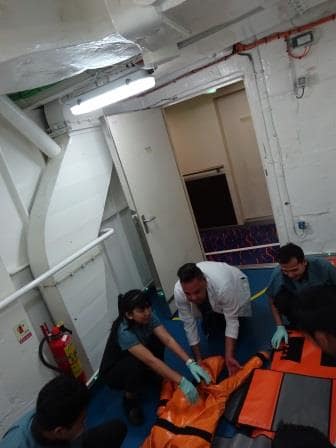 Once the injured person is safely removed they are handed over to the stretcher team for transport. Here we see the team made up of Housekeeping Attendants with a Medical Officer putting our “victim” on the stretcher.

Thus we simulated a crash on the forward deck and exercised the correct approach with the objective to remove a “victim” / injured person. For that we use two teams; one with a hose with sea water and one with a hose with foam (against fuel spills). One team tries to maneuver itself in such a position that the victim can be safely removed while the 2nd hose protects the team busy with that extraction. In the meantime there is another team a deck above who lets it “rain” foam over the crashed helicopter and a team below in case fire goes through the deck below. When the whole exercise was over there was a debriefing for lessons learned, followed by a short training to explain the whole sequence and what each and every team does, as often everybody only sees a small part of the whole evolution.

Tomorrow we will be in Half Moon Cay where we will be together with the Zuiderdam. For my school class it will be an early morning as at 05.00 hrs. the ship will conduct a General Closure of all the Fire Screen Doors in the ship. More about that tomorrow.