Because the time/distance between pilot station and docking is so short and the port layout is so simple, all the cruise ships arrive at nearly the same time. If there were traffic lights they would all be lined up behind each other waiting for their turn.  There is not a traffic light system of course  and so the port authority has to make sure the ships are scheduled in such a way that they can be handled by the pilots in the right order and that there are linesmen waiting on the dock for the ropes to come ashore.

When we arrived the Regal Princess was already docked, we came in second, followed by the Celebrity Summit and then followed as the last one of the visiting quartet, the Freedom of the Seas. This left two berths empty at the end of the East Pier. Thus in total St. Maarten can handle six ships of considerable size. In contrast to San Juan, they have the bollards better positioned here and thus little to complain about in regards to the pier. But sailors like to complain, so we will find something.  As mentioned yesterday the challenge of St. Maarten is to deal with the swell coming around the East point of the islands. This has always been an issue; hence they built the cargo port against the rocks / hill of the East point and completely out of the swell.  When the time came for constructing cruise piers there was not much lee side left anymore and now we just have to deal with it. If you are deep in or deep forward on the East pier then only your stern catches the swell a bit but the other berths can be fully exposed, depending on the angle of the swell.

Today the West pier was more exposed and both the Regal Princess and the Freedom of the Seas docked nose out so that any swell would hit the bow and the energy transferred into a pitching motion. Easier for the mooring ropes to deal with. If you dock nose, then the swell hits the stern and as that stern is squarer and blunt, the swells energy tends to be more converted into a cork screw swaying motion and mooring ropes do not like that at all.  It puts a variation of stresses on a rope and where they touch the ship it will eventually chafe through or find a weak strand among all the strands which make up a rope and it will break. The east pier was more sheltered thus Summit and NA docked nose in. 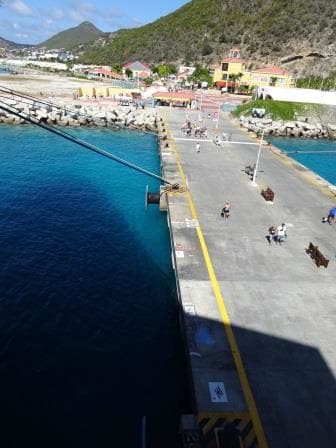 The beginning of the Pier and the entrance to Philipsburg. 1000’s of eager shoppers pass through the gates here each day.

Today we were the lucky one, with our nose all the way in and protected by the Celebrity Summit; it meant our ship was hardly riding along the pier. The Summit caught a bit of the swell with the stern, and was making more movements but not much to be concerned about.  So we all had a nice, quiet and sunny day, while at least 10,000 guests explored St. Maarten.

It is amazing what goes on, on a cruise ship, as far as training is concerned. Not just the training by the ship itself or my presence with a group of officers but what the company flies in from the outside. Last week we had a safety trainer to refresh technical skills for deck and engine and this week we had a Pest Management Specialist coming in: the cockroach guy, for his relevant training.  In the old days we used have a lot of cockroaches on the ships. The ships had a lot of real wood on board and were constructed with an eye on sturdiness and not exactly for easy cleaning options.  When I was a junior officer I was sometimes supervising the “the safari team” which was a group of sailors hunting for the bugs. Then the ships got less wood and construction also started to take into consideration “cracks and crevices”. The less of them, the less chance of having the bugs. Now the ships are vermin free but we still have the challenge to keep them off the ship. For that the relevant crew was trained this morning, Housekeeping Store rooms but also the shop ladies as they handle boxes with the shop stores coming from the shore side. Recognize what you see and what to do about it is of the utmost importance.

The German cockroach marches on board, The American Cockroach flies on board, and the bed bug hitches a ride to come on board. Important to know is where and when to expect this and half the battle is already won. Stop that from happening and you are in good shape.

On top of that we had our Hotel Director Renee Tuinman conduct an “Excellence Meeting” to help the crew to raise the level of service to an even higher level.  My team was of course present, first to soak in all the knowledge but also to understand the issues the other departments have to deal with. 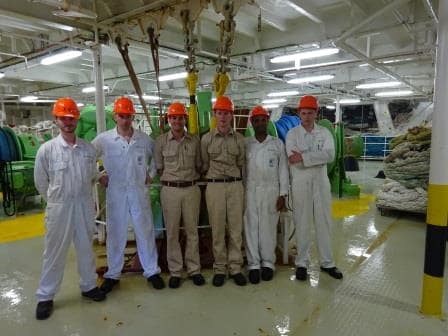 I have four representatives from Holland on board, one from New Zealand and one from the UK. By handling all the mooring and anchor equipment they will get a bit routine insight of what goes on during mooring deck operations.

Soon enough it was departure time as the Nieuw Amsterdam sailed at 15.00 hrs. in order to make Half Moon Cay on time. The team is present at each mooring and unmooring and are building up more and more routine in the operation and we were there to cast off the lines.  Tomorrow will be a sea day and the weather looks good so we should have a good ride back towards Fort Lauderdale.