Our medical evacuation in Grand Turk yesterday caused a delay in departure and thus we arrived a bit later today in San Juan.  Nothing we can do about it; saving lives comes first at all times.  But the captain put the pedal to the metal and tried to make up as much of the lost time as possible. With lunch just behind us the good ship Nieuw Amsterdam sailed into San Juan under sunny skies. While it was outside quite windy, inside it was a lot better and by the time we docked it was almost windstill……. Relatively spoken as the wind was still blowing but we docked behind the Carnival Glory. That ship is bigger than the Nieuw Amsterdam and thus acted as a magnificent wind breaker. She will leave at 16.30 hrs. today but she was quite handy for our docking purposes today. 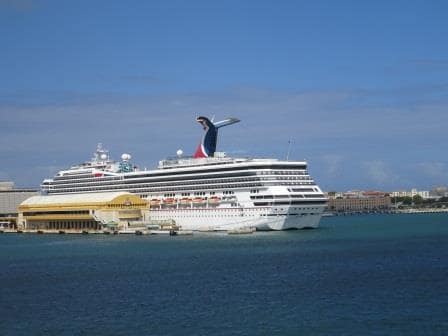 The Carnival Glory keeping us nicely out of the Easterly Trade Wind.

Today we docked at 3 West which is not our favorite dock as it only has one bollard for the stern lines which has to be shared by two ships. Why the designer and authorities did not put some extra bollards in, which would have made it possible to separate the lines of the Carnival Glory and the Nieuw Amsterdam, is anybody’s guess. Two big ships with all their stern lines on one bollard is not good practice. Today it is not much of a challenge as the wind is not too bad but on a very windy or stormy day putting all your eggs in one basket, e.g. putting all your lines on one bollard is not good seamanship. 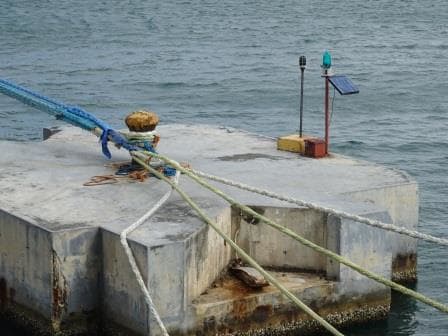 The offending Bollard. There is more than enough room to have installed four of those on the large dolphin/platform.

However, cruise terminals are seldom designed by sailors but by shore side designers who put those “little bowling pins” where it looks pretty and aesthetically pleasing. Once the dock is opened up and the professionals arrive it is too late and we just have to live with whatever creativity has been put on display. And retro fitting is an uphill struggle which seldom comes to fruition. But enough moaning from my side for today. 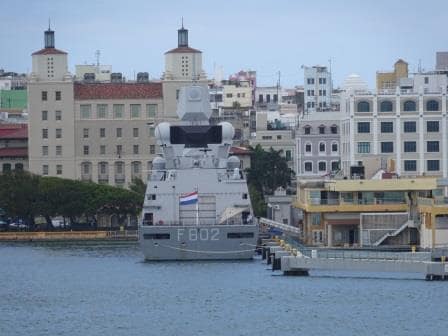 Today San Juan had the pleasing presence of two Dutch ships. We had a Dutch warship in. The F802: an Air defense and Command Frigate with the very Dutch name of De Zeven Provincien. In English The Seven Provinces. A name harking back to the 16th century when the Netherlands had only 7 counties’s or States of which Holland was the most important. It is a class of three ships with the other two named after Dutch Admirals who also in the 16th. Century were very effective in hitting the British over the head.

The Dutch Royal Navy always has one or more ships stationed in the Caribbean as it maintains a base in Curacao. They play a very active part in trying to curtail the Drugs trade which comes out of South America and we regularly see them patrolling near the coast of Venezuela. In the same way as we see the USCG and the US navy.  I could not find what they were doing here but if they were involved in the anti-drug war, then normally San Juan is a stop on the way out or on the way home. Great for the crew; there is nearly always a dock available in downtown and then the “fleshpots of Babylon” are just across the road as my uncle would say. We always keep an eye out in case there is somebody waiting at the fantail to lower the flag in a proper greeting ceremony but nobody was on standby.” Across the road” was much more interesting I suppose.

We will stay in San Juan until 20.30 tonight, shorter than normal but then we have to go to St. Maarten this time and that is a much longer distance to travel than to St. Thomas where we dock during other cruises.  We will be arriving there at 7 am. in the morning and for all the navigators is always the big question there: what will the swell be like? The ships at the two big docks are fairly well protected against the wind but the swell tends to curve around the island and cause the ships to ride along the piers. Not good for stepping on and off the gangway and it causes mooring ropes to break.

We are expecting the Regal Princess, the Freedom of the Seas and the Celebrity Summit. According to the planning of the port we will be docking at the South pier on the North West side and that might just make it nice and sheltered as we will be lying in line as the most western ship of the four. Weather should be good, maybe a bit windy but with sunny skies and temperatures of 28oC / 83 0F.