The last cruise call at Grand Turk was a bit of a disappointment weather wise, at least for the operational side; too much wind, this week it was picture perfect.  Clear skies, gentle breeze and no swell. The only complaint we could make was, that we were not the only ship in port. Shortly after our arrival the Carnival Pride arrived. Luckily the Beach resort built together with the cruise ship pier is large enough to handle two or more big ships, thus there was no overcrowding to speak of. For a moment I was afraid that there would be three ships as the Regal Princess showed up and hovered off the dock, but they needed to land somebody and send a tender for the authorities.

Who was also very happy was the Staff Captain as he was able to lower lifeboats for training, which with the possible swell in this port is not always possible. This cruise can be very difficult in this respect, swell in Grand Turk, late arrival in San Juan, and swell in St.Maarten. It all leaves St. Thomas as the only reliable port where we seldom have issues.   Thus today the boats went down and we also drilled the life raft crew. This training was done by my school class who got their first official taste of un-aided work in front of a –very critical- audience. 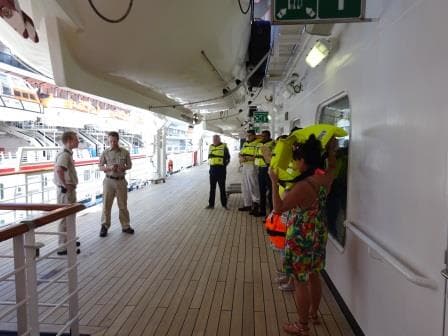 As we had worked, studied and trained for this for the last two days, it turned out not to be such a difficult thing and the regular ships officers were quite impressed. They had to learn it the hard way, as they joined Holland America before this program was in place. All went well, which was a great boost for the confidence of my trainees and at 1 pm. I had six smiling gentlemen sitting in front of me, who were quite pleased with themselves. Now it is a matter of gaining experiences and building on the initial experiences made. Hopefully they will not forget the wise lessons of this old captain who kept them busy for 14 days with all sorts of strange training and insights behind the scenes. 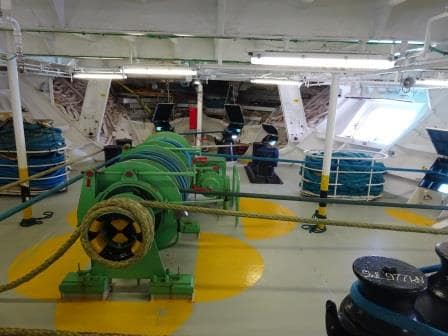 Spaghetti Junction. 8 ropes going ashore in Grand Turk to keep the ship alongside.

One of the most important insights to be gained takes place during the arrival and departure standbys on the mooring decks.  One of the regular duties of a 3rd officer is to be at “stations” during arrival and departure for supervising the mooring of the vessel. The only way to get a real good insight into what exactly goes on, how to handle ropes safely and how to create an efficient team on the mooring deck is to have done it yourself.  When looking at the sailors going about their duties, it looks easy enough but once you get involved yourself your find out it is not. Basically you need eyes in the back of your head to keep a good overview. Most people only have eyes on the front, but when you start gaining experience and start to build up routine, you get a feeling, a sort of sixth sense of what is going to happen and so you – see – the situation before it occurs and can then prevent it. 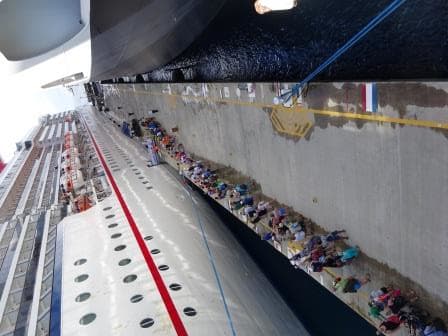 So my guys are doing each and every arrival and departure which means getting up early every day but then they have to get used to it anyway. On departure today it gave them the chance to observe the contrast between Carnival and Holland America. Carnival with long lines at the gangway as everybody returned from the beach at the same time which took time to clear; Holland America guests all  back early but with an ambulance at the gangway for a medivac which took up our time.

Tomorrow we are at sea, heading for San Juan were we should arrive around lunch time. It should be another nice but hot day. 86oF / 30oC with high humidity.