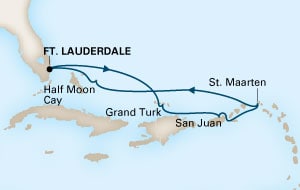 As mentioned yesterday, this cruise is calling at St.Maarten instead of St. Thomas.

With extremely nice weather, both sun and sea, we are sailing north of the Bahamas towards Grand Turk Island. Because of the very nice seas we have a lot of cargo traffic around us, Cargo ships that have not opted this time for sailing through the Old Bahamas Channel. The old Bahama channel is a longer route as it goes south of the Bahamas and thus costs more fuel but it is also more sheltered and thus you can make more speed and that saves time. For a cargo captain a nice calculation to make and figure out what is the best for the ship. Our ships do the same if the weather gets very unpleasant in the North Atlantic, but it cannot get much better than this, e.g. what we have today.

In the meantime the training class has progressed to exploring the engine spaces. They are Navigation Officers and on a cruise ship it means that it is a completely different discipline than on cargo ships where a lot of functions are integrated. It simply comes with the fact that cruise ships are so complicated in construction and the functional needs in both disciplines so extensive. Our A.C. system is often bigger than an engine room on a fair sized container ship.

Although they do not directly work in the engine room for technical activities, deck officers are still very much involved. In case of fire they support and back up the Engine Fire fighting teams and most of the regular fire fighting equipment is maintained and tested by the Deck Department. For both reasons it is extremely important for deck officers to have a good knowledge of the layout of the machinery spaces, how to get to the correct location via the shortest route, and to understand the dangers which are always prevalent in these areas.

Thus it forms part of the training period. We start by looking at the Fire Control Plan. This gives a very good layout of the Engine Room and it lists in deep detail the location and layout of all the  fire prevention construction there is and all the systems which have been installed to protect the area’s in case of a fire. The challenge now comes, after studying the fire Control plans with all its diagrams, is to visualize it in reality. Not easy as with so many pumps, tanks, engines and other equipment around it is very difficult to relate to where you are exactly in the engine room.

The B deck level with the top layout of the six main engines. Top right is one of the boilers for steam production,

Signs to help you are everywhere, all meant to help with a quick orientation in an emergency but as there is no clear “bow – stern” recognition in the lay out, you have to study and practice.  The main engine room is laid out over B, C and D deck and takes up about half the length of the ship.  On B & C deck there are crew cabins in the fwd. area but on D deck there are tanks, such as the potable water tanks. 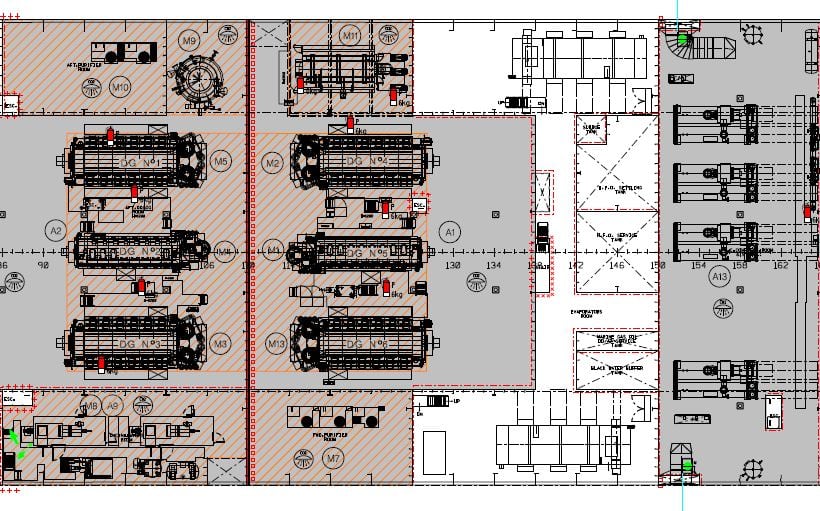 The mid level of the six main engines and now aux. engine spaces are visible as well. The four rectangles to the right are the four A.C units of the ship.

Still this half part of the ship is complicated enough to get lost in and disorientated. Thus training is of the essence. Also getting in is not easy as the whole area is locked in and blocked off. If you do not have the key or know the door, it is hard to find. If you are a visitor, then you first have to report to the Engine Control Room and sign in the Visitor log. Then you get scrutinized by the Engineer on Duty to see if you are wearing Safety shoes (steel noses) and hearing protection and if you know what you are doing. Sometimes permission is played up all the way to the Chief Engineer.

Then you can go in and do whatever job you have to do. We spent a few hours down there, trying to get somewhere as fast as possible via the safest route, to get out as quickly as possible (every space has an emergency exit) and also realize in what section of the ship we exactly where.

Tomorrow we are in Grand Turk. According to the latest information we are sharing the berth with a Carnival ship and thus we have to make sure that we are not arriving at the same time.  The weather is looking a bit variable with some scattered showers in the area but it will be warm. 810F / 27oC.