Today it was a very good day for being in Ft. Lauderdale, also as a turn over port. It was sunny but not too warm; there were plenty of cruise ships in but nothing on the road to slow down the procedures. For once the Nieuw Amsterdam only had to wait for the pilot to come on board on departure instead the pilot having to wait for last minute guests coming on board.  So today all was well in the world as far as turn- overs- were concerned.

My class was out and about today as I could not look after them in the morning due to having to go ashore again to be instrumental in obtaining the “zero count”. So I trundled off the ship at 10.30 with the last group and then trundled back on board again with the first group when embarkation started.   In the meantime the class went to observe chemical and recyclables off-loading with the Health and Sanitation Officer and afterwards reported to the First Officer to get involved in the noble activity of repairing Fire Dampers.

Together with Fire Screen Doors, the Fire Dampers are a major headache for each Safety Officer. Fire screen doors of which there are about 300 on board sometimes breakdown if they get hit by a trolley or a transport cart. The impact normally affects the closing mechanism and then the door does not fully close anymore. Thus the Safety Officer shows up with a hammer (for structural damage) and a screw driver for re-adjusting the closing speed. Fire screen doors you see everywhere in the Guest spaces especially around the staircases. They also are everywhere in the crew area’s and that is where there is the most repair work as the traffic (and the number of trolley’s) is the greatest here. 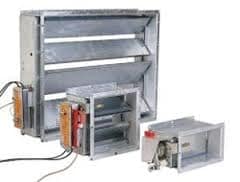 A few models of fire dampers we can find in the accommodation. Those for the engine room spaces can be up to 7 or 8 feet high.

Fire Dampers are normally not seen by the guests. They can be felt by a guest, if suddenly the A.C does not work anymore. If there is no general stoppage of the main system, then normally there is a blockage in a fan duct and quite often that turns out to be a Fire Damper that decided to close by itself. We can not always see this as the indication might still give the all clear. Each damper has an indicator on the remote switch and if that is green, then we do not know until we get a complaint or when carrying out a bi-monthly in depth inspection. We cannot do a more frequent inspection as there are too many of them.   Thus we normally get the complaint first.

What do Fire dampers do?  Basically they are little doors or flaps which close a duct where air flows through. Circulating air will fan & feed a fire and thus they help stopping a fire by cutting this circulation off.  They can be found anywhere in the ship where there is some sort of air circulation going on. Most ships have hundreds of them. The majority can be found in and near A.C stations which are everywhere on board, or in the engine room, or in locations where ventilation ducting goes through a fire bulkhead or main vertical zone. However the latter you only see on older ships as it is not really allowed anymore. 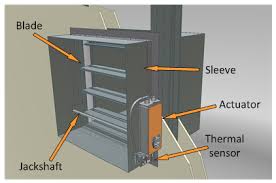 Every orange arrow indicates a name but also an item that can go wrong.

The smaller dampers are electrically operated and when activated seal off the ducts serving the accommodation areas. The damper itself might be one flap or several louvres which work in conjunction.  As there is cold or hot air flowing by and that air can still be tinged with salt, corrosion is an option and then they can get stuck. Also the little motor can burn out or the fuse can go.  Lots of small things which make damper maintenance a never ending enjoyment for the deck officers.

Thus today the Nieuw Amsterdam had six extra officers available to tinker with the dampers and to carry out a myriad of small repairs. Good for the ship and even better for them as these sort of repairs need a lot of experience and routine to do them fast and effective.

Tonight we go an hour forward and then tomorrow we are a full day at sea heading for Grand Turk Island. At the moment the weather looks good, so we hope that it will stay that way.