Today we were together with the Oosterdam and today was a little bit of a mixed blessing. For the guests the weather was great. Only after departure it started to cloud over and with a cool wind blowing it was nice on the island and not too warm even with the sun. The other side of the coin had more to do with the operational side. The cool wind, so nice for the guests was at times a wind force six in the open water where the two ships were. That meant that they could not be as close together as would have been convenient for the tender operation. So the Oosterdam settled down at the main anchorage closest to the port as it had to use its own tenders. The Nieuw Amsterdam went somewhat to the South, a slightly longer distance but then it had the benefit of the shore tenders. 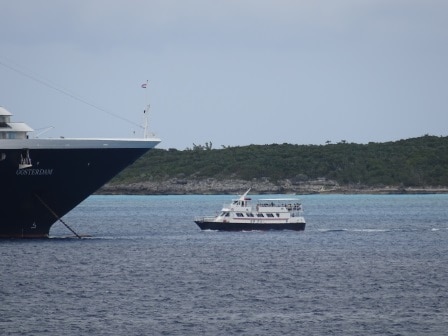 The little Sting Ray disappearing under the bow of the Oosterdam

The rule at Half Moon Cay is that the largest ship with the largest number of guests on board will get the shore tenders allocated. In principle there are two of them, the Henry Hudson and the Anne Bonney.  So those two came to the Nieuw Amsterdam. Then there is the Sting Ray which is about half size of the other two but can help out and she went to the Oosterdam to augment their own tenders.  If one of the ships runs into issues then tenders can always be mixed and matched of course but there is a system for the initial setup.  Then there is a final tender, the Half Moon Cay which is more of a work horse. Built for the bad weather up in N.E Canada with only a limited passenger accommodation. But it has a large loading platform at the back with a crane and thus it is used for ferrying supplies to the island from the ships.

The two ships together brought just fewer than 4000 guests to the island and it can easily handle that. With only one ship in, the beach looks a bit sparse but with 2 ships the beach fills up at bit more and the rest of the guests are normally spread out over the island at the numerous attractions and so avoiding over crowding.  I believe everything was in full swing today except the Para Glider but that might have been due to the strong winds.

I sent my school class ashore for a few hours as this might be one of the very few opportunities they will have to see the island. We cannot always make the call due to the weather and the tender service takes up a lot of man power as well, leaving few options to have a good look around.  Half Moon Cay is very beautiful and is one of the nicest beachy-island destinations  there is. I have seen Princess Cay and Castaway Cay (Mickey Mouse) and without being biased ours is better.

For the ships the operational challenge there is that all the food and drink comes from the ship and goes ashore to be prepared and served by our own crew. That is a logistical nightmare as there is always a delay in delivery if something is forgotten. So the Hotel department is in a constant frenzy to ensure that everything goes ashore and nothing is forgotten. Not a mean feat considering there will be 4000 hungry guests descending on the cook-out at lunch time. Not a good idea if you are then suddenly running short of napkins.  Normally the ships divide the burden between them with one ship providing the food and the other the beverages while both deliver 50% of the crew. So for some of the crew it is also a sort of reunion as they meet up with collegues from previous contracts. 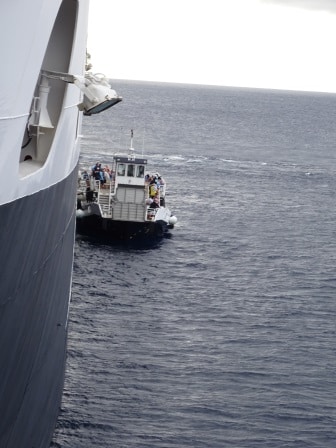 The final island tender coming back to the Nieuw Amsterdam.

For both ships it was 14.30 hrs. all back on board and both ships just managed to get ready to sail at 15.00 hrs. The Nieuw Amsterdam beat the Oosterdam to it as it had not anchored but had remained on the engines and drifting. The Oosterdam needed some extra time to get the anchor up but then she did have the advantage of having the better anchorage location.

Tomorrow we are back in Fort Lauderdale and a new cruise will start. Nearly the same as this one but with calling at St.Maarten instead of at St.Thomas. We will have the same ships in port and that will make for a crowded day again.