The nice weather held and we arrived this morning with sunny skies and a cool breeze blowing from the North East. A bit of a cool wind is not bad at all for Half Moon Cay as it makes it less warm later in the day and this indeed happened. Nice sunny weather with bearable temperatures while on the beach. My class had been up and about for a while already as they were involved in the General Closure procedure for all the Fire Screen Doors.  The Nieuw Amsterdam is divided in seven safety sections called Main Fire Zones or Main Vertical Zones and these are separated from each other by Fire Resistant bulkheads. There are a lot of holes in these bulkheads as everybody must be able to walk through the ship. In case of fire when we want to isolate the section on fire we close the Fire Screen Doors which will then plug those holes.

Holes as in corridors; as in the big open spaces of the public rooms; as in access to store rooms; AC Stations, Engine Spaces, etc. etc. The law requires the testing of these doors on a regular basis. Closing and opening locally, closing one by one from the bridge, closing by vertical section from the bridge and closing them all at the same time. The latter is called a General Closure. The challenge is when to do this because A. most of the time there are guests and crew walking around creating a chance of an accident and B. if guests or crew keep going through you cannot see from the bridge if the door is really closed. The indicator will not stay on green = safe = closed.  Through the years we have figured out that the best time is around 05.00 in the morning. The late night revelers have gone to bed, and the early morning risers have not risen yet. 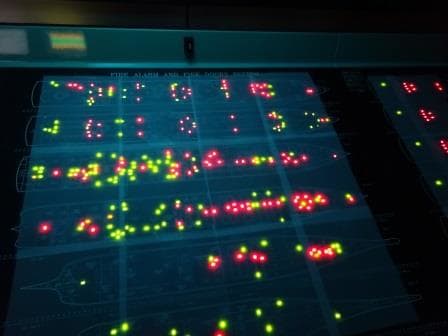 All the doors in the process of closing. Done from the bridge and now going from Red to Green. Over the top of the console tracing paper has been placed so the Safety Officer can mark those doors which might need attention

Still we have officers and crew everywhere to monitor the situation and six extra hands for this evolution is always much appreciated. Hence at 05.00 we were all in position when the switch was flipped and the doors closed. With so many Fire screen doors there is always one that will need re-adjusting or for which the controlling light on the bridge has flunked out.  This is then corrected the same morning by the Safety Officer and his staff. 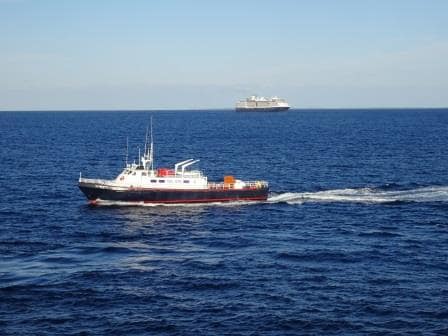 The Half Moon Clipper approaching with the Zuiderdam in the background.

I mentioned in an earlier blog that all the material for the days stay comes from the ship(s) and nearly all the service staff as well. For that purpose the Half Moon Clipper comes alongside to collect all the food and drink needed on the island. As soon as the ship is on location the tender service starts while at the same time the Half Moon Clipper is loaded. Everything goes to the island where small trucks are waiting to bring it to the various venues. When the day is done the left overs are returned to the ship(s). 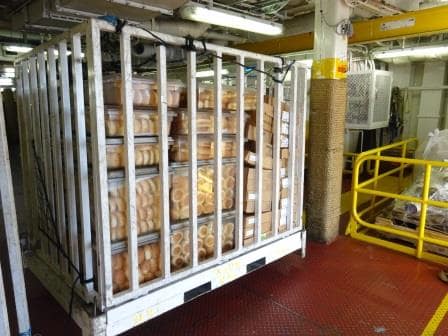 How about this? A whole pallet of Hamburger buns going ashore.

Our Culinary Staff are very skillful in calculating how much will be used during the day, so very little comes back.  They know exactly how much our guests eat (a lot) and what they like (steak, burgers, fish and freshly cooked vegetables). What is harder to predict is the amount of beverages being consumed as that depends on a lot of factors. Thus we see quite a few bottles returning. According to one Steward there was today a low interest in various Rums but a high interest in Light Beers. Next week might be different. 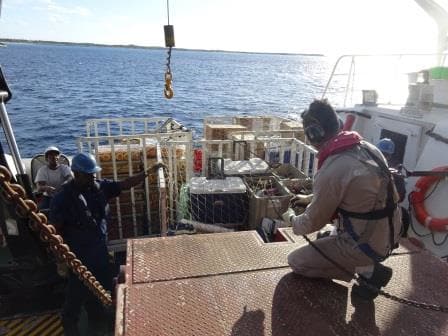 All the luggage crates have been loaded by means of the crane from the Half Moon Clipper and ready to depart.

Today also my class came to an end. For 14 days I tried my best to transfer as much information and experience as possible. Some of the routines and topics might have looked be a bit mundane but later on they will realize that safe working comes with knowledge of routines and doing it and then it will all make sense. They will now return home and then wait for their first assignment. 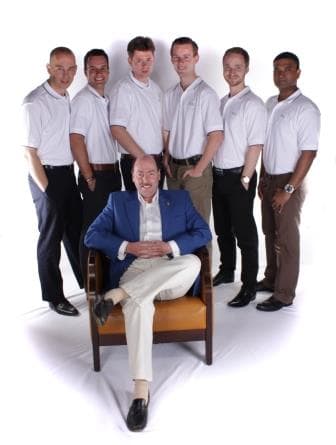 I will fly home as well to turn myself around and get ready for the other part of my job the On Board Team Support Officer.  Then on Monday 7 march I will fly to Italy to join the Koningsdam. Thus for a few days my blogging will stop and then I hope to dispense some interesting facts about how a new and empty ship is being manned and is getting ready (I think the Navy uses the word “worked up’) for service. We have about three weeks to get all the crew singing the same tune before the first cruise starts. A lot of crew come from the other ships and that means we have to mold S-Class, R-Class, Vista Class and Signature Class routines and service into a new Pinnacle Class operation.

Tomorrow morning we will be docked in Ft. Lauderdale around 07.30 am. and we will have the same busy day as usual.  I will be “on the blog” again in seven days.