While going south in the beginning of this cruise we had the option to go above the Bahama Bank or to go under it, staying North of Cuba.  Now there is no option, we have to go into the open North Atlantic Ocean and sail north of the Bahamas as Half Moon Cay/ Little San Salvador Island is one of the islands at the Northern edge of the Bahama Bank.  If it would be very bad weather on the North Atlantic, the captain would go south, and then we would have to miss Half Moon Cay as the schedule would be too tight. But with bad weather on the North Atlantic you would have to cancel HMC anyway as it is very exposed to that Atlantic weather. Although the ship is a bit lively today due to a wave pattern left behind by another Cape Hatteras special from a few days ago, combined with a strong breeze blowing, we are still very lucky as by the end of next weekend the weather gurus are predicting a lot of turmoil on the middle Atlantic and those wave patterns will make any boat rock that would be outside the Bahamas. 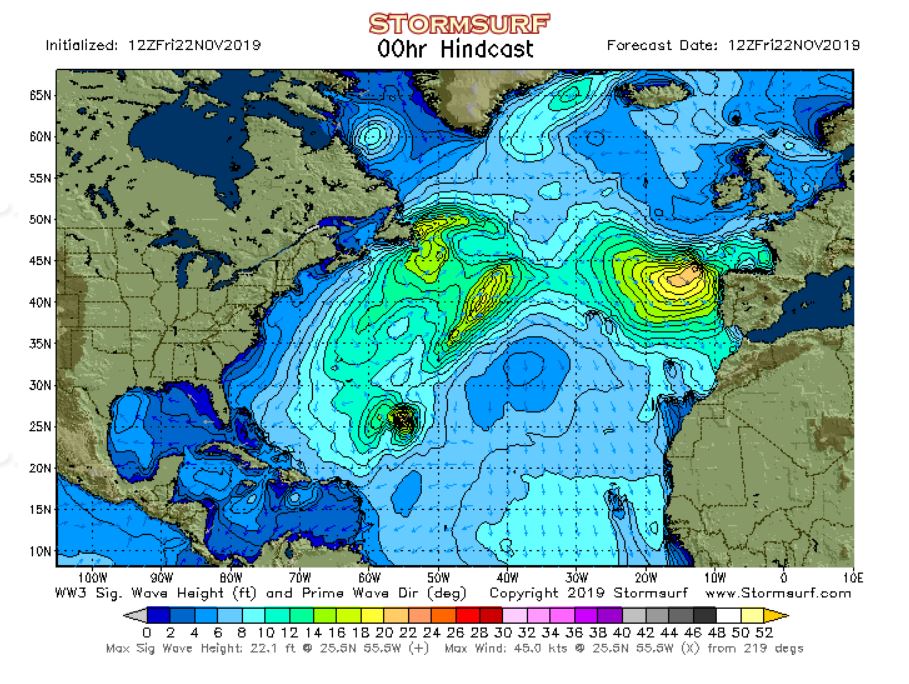 The waves on the North Atlantic. We are in the light blue / light green section. which means that together with the waves produced by the current wind we sometimes have less that 10 and sometimes more than 10 feet and then we move a bit between quiet moments.

My day was filled with organizing and executing a Damage Control Drill for the engine department. You will have seen various executions of this in my past blogs. Most of the time we do it on the forward observations deck but as the Koningsdam has a Jacuzzi there that is not so easy. But the ship has a very large aft mooring deck which is perfect. The engineering department trains with the equipment on a regular basis but does not have the time to set something up as big as I can do which of course is more realistic than just putting a small clamp around a pipe. 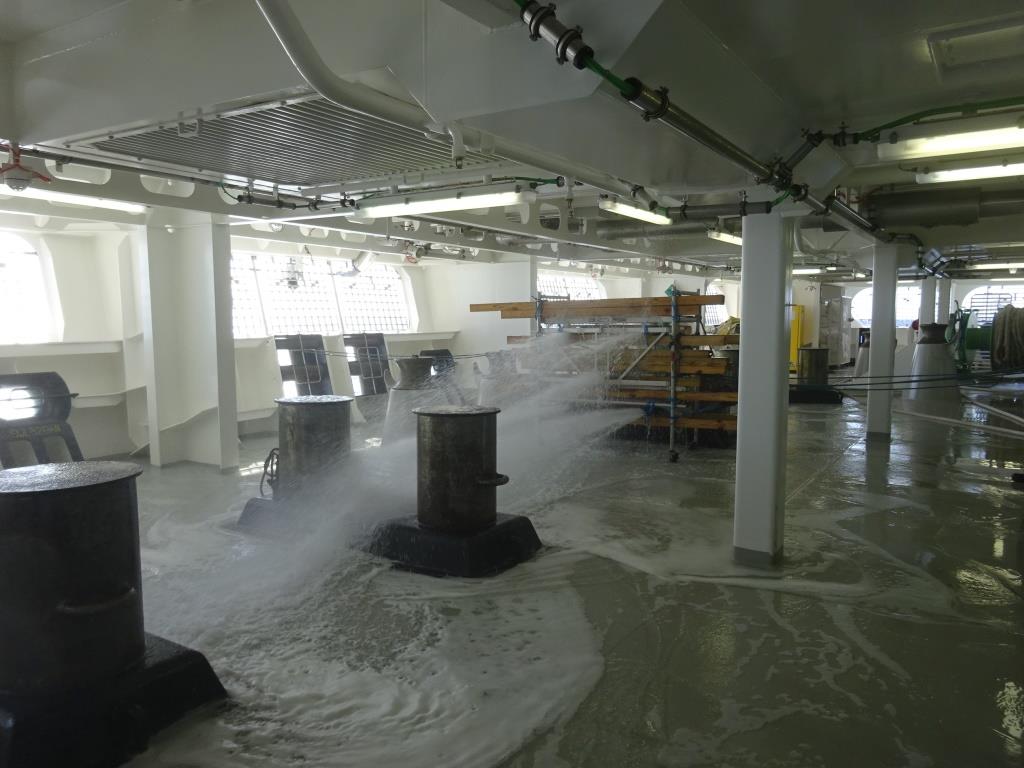 The challenge of today. 5 water hoses pumping over 300 tons of sea water an hour into the ship.  Which is on the mooring deck not a problem as it goes straight back to where it came from.

While that is going on, they have to go through the ship to collect all the equipment which is stored in various damage control lockers. We do not have all the equipment in the same area as with a collision or other sort of mayhem it might then wipe out all our equipment. Thus it is spread around in the various main vertical zones.  A vertical zone is a vertical section of the ship which is separated from another vertical section by Fire tight bulkheads and below the water line by watertight bulkheads. With having equipment in separate zones we would never lose everything in case one zone would be affected. The watertight subdivision ensures that if one or two compartments would be penetrated then those compartments could fill up and the watertight doors would prevent the water from flowing to the rest of the ship. 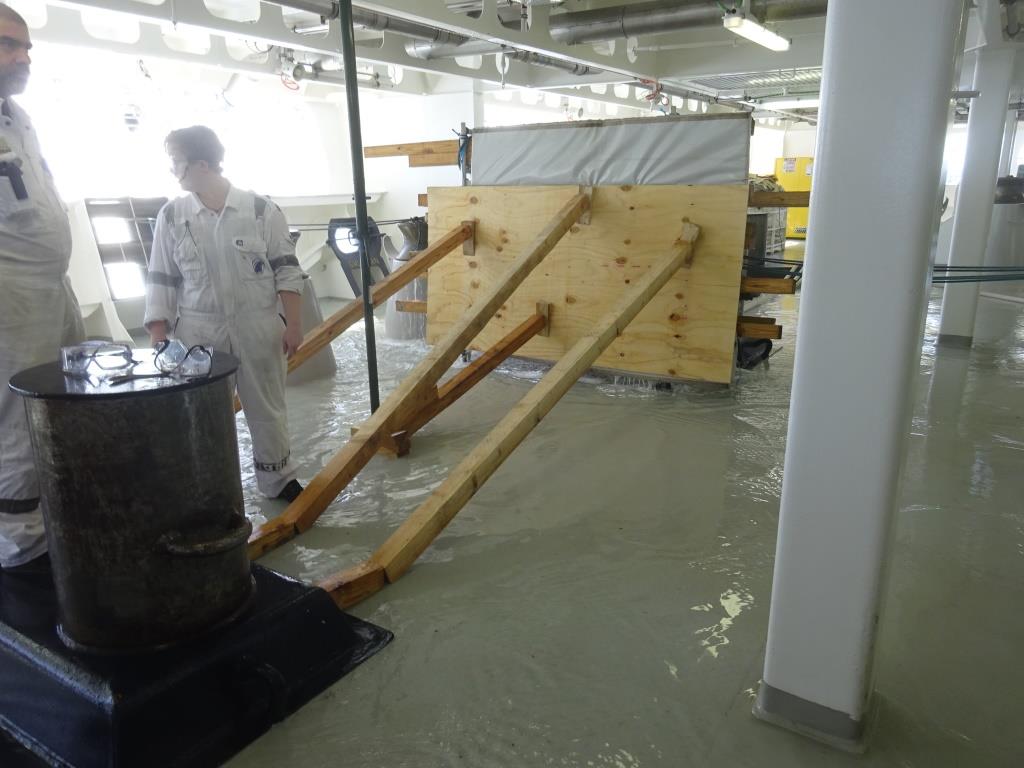 And that is the way we save the ship. To the left one of our cadets who did not get as wet as she had hoped for.

When walking around on the lower decks you see things that you normally would not expect. Such a thing as guests. Guests are not allowed in the crew and service areas, one reason is for safety as a cruise ship is a 24 hrs. a day operation and secondly because the lower decks are the home of the crew, almost all of them, a selected few excluded including the captain, who for some reason wants to live behind the bridge. So a group of guests is unusual but not in this case as we conduct behind the scenes tours. I have no idea how they much they cost but it shows you the bridge, the Engine Control Room, the Store Rooms, the Print shop and a few other places.  I was just about to start an instruction and there came this whole group marching out of the print shop.  And while they were waiting for the Provisions Master to pick them up for a tour of the liquor store and other store rooms (always impressive) I grabbed the chance to tell them a little bit of what was going on and why all the equipment was collected. 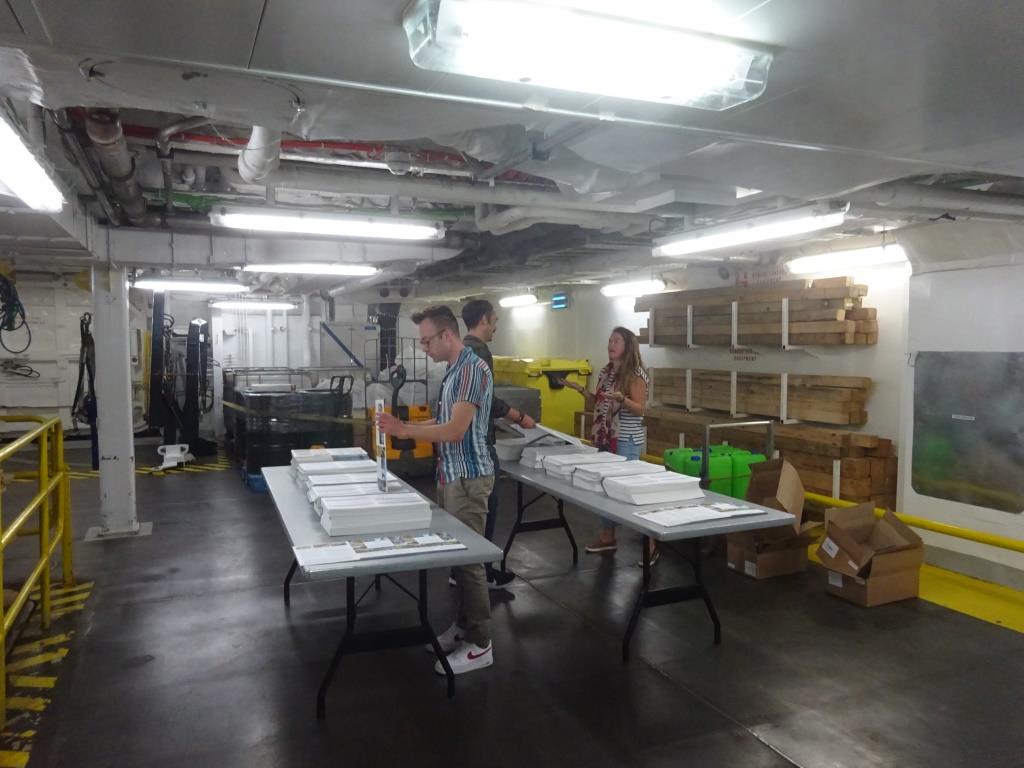 Boredom therapy. Sounds strange on a cruise ship but after awhile all that a cruise guest finds exciting just becomes routine for us. Hence we keep the spouses busy.  There are three in the photo but there were five or six milling around. As you can see the days that all the spouses on board were female are long gone. In the background the wooden beams that we use for plugging holes in the ship side. Same as you can see on the photo above.

Another thing to see, is what we do on occasion with Spouses on Board. Holland America Line as has very generous – sailing with your partner or friend – policy and we have thus always quite a few of them on board. As we are always concerned that they might get bored, we have a boredom therapy. We put them to work. Once a cruise they are asked to help out with sorting and folding the tour planners that come to the cabin. We have a folding and stapling machine but with such high volumes and many pages the Printer has figured out long time ago, that manual help goes faster. And we do not want our spouses to get bored. And a spouse who does not want to help out….. will feel the displeasure of the whole shipboard community. As one captain once said, you are excused if you have a baby, you are not excused because of making a baby. But is a great bonding tool as otherwise the spouses can be somewhat left alone while the better half (that is the half that is earning the money in this case) is away for prolonged times.

Tomorrow we are in Half Moon Cay and the weather looks good. Partly Cloudy skies, 79oF / 26oC and a gentle breeze as the strong wind of today is supposed to abate. That will bring the rain which we left behind in St. Thomas closer but it is not supposed to hit the island until about 1900 hrs. And we will be long gone.