With very nice weather we arrived at 0800 at the anchorage and because the weather was so nice, with a steady light breeze expected from the South East all day, the ship dropped anchor instead of staying on the engines. As soon as we were there, the whole cycle started again (see previous blog with the Zuiderdam) where the first shore tender collected about 60 crew  who race ashore as  sort of preparation force to get everything ready for the guests. The locals who come from Eleuthera Island next door operate all the ventures except the Bars and Cooking facilities. While the first tender is on the way, the ship is being cleared by the local authorities and for that purpose a Customs Officer comes on board. Then the Half Moon Clipper is loaded up with everything that is needed for the Bars and the open air restaurant. This customs officer also came over with the Half Moon Clipper from Eleuthera. Holland America might have 1000 year lease on the island and sole operating rights, but it is still part of the Bahamas so the Bahamian custom rules are in force.

Those customs rules are quite easy to deal with as there is nowhere to go, as what goes to the island cannot really go anywhere else, or used by anybody else, as there is nothing left once the ship has departed. So the Customs Official is more interested to see what goes ashore – is it really for the island operations – and will it come back again. Then there are of course the Guest and Crew list and the statement of the Doctor that we have a healthy ship.  The remainder of the day the Customs Official is available for questions etc. and to ensure that the ship is not opening the shops or the casino, as Bahamian Rules apply. 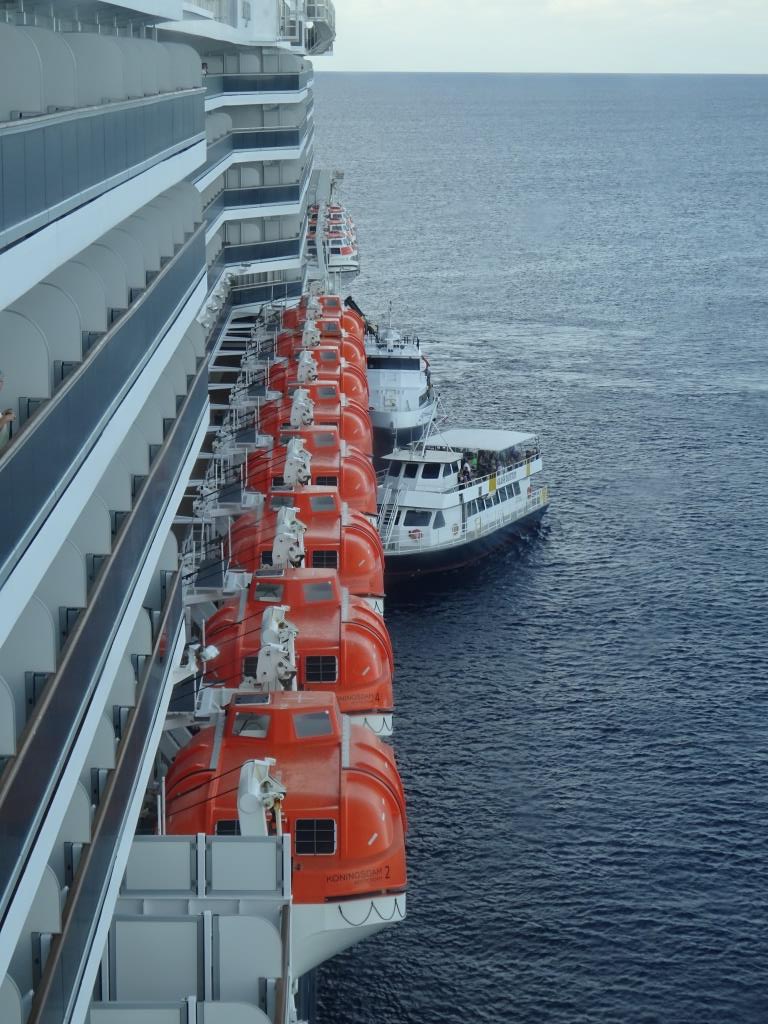 Island operations in full swing. In the front the shore tender just leaving with a full load of guests, in the back the Half Moon Clipper (II) busy with loading stores, provisions and beverages for the island.

We are the only ship in today and that means that our 2500 guests have the whole island to themselves with ample space as Half Moon Cay can easily absorb 6000 people. When there is no HAL ship present then ships from other brands under the Carnival Umbrella can use the island and thus we see often Carnival Lines cruise ships present as that brand does not have its own island. But today we were there and thus Carnival had to go somewhere else. As we had clear visibility we could see the Carnival Sunshine anchoring at the Princess Cays which is just to the west of us and is located at the south west tip of Eleuthera Island. This island is much larger than Little San Salvador and houses a considerable population. Some of whom work on Half Moon Cay. 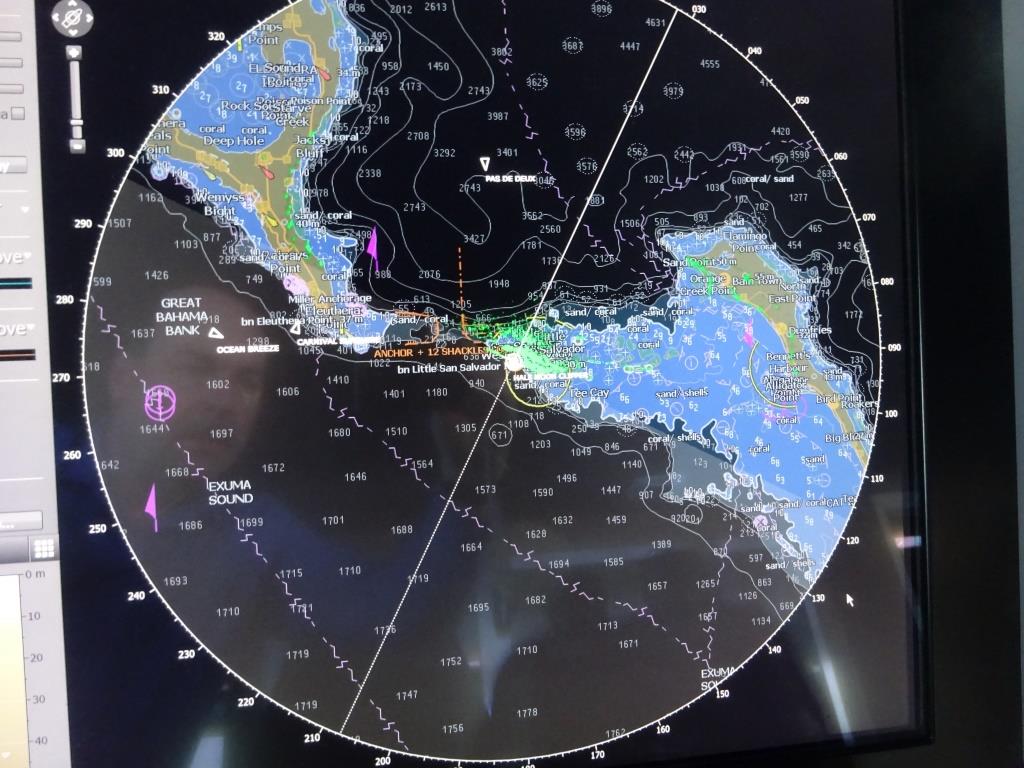 Eleuthera Island to the left and Little San Salvador to the right. Easy to see why it is possible for the locals from Eleuthera to hop over with our Clipper for the day.  The gap in the middle is the fairway that is used for ships coming and going to Florida.

Half Moon Cay is almost flat; I was told that the highest “mountain” on the island is 25 feet high and that was considered too low to even build a look out post on it. Being so low means that the ships at anchor on the west side of the island are fully exposed to the weather. Normally the wind (trade winds) is coming from the East or North East and then up to 30 knots make it possible to stay. Guests going ashore will not notice very much as when sitting on the beach, they are in the lee of the vegetation. 30 knots is about the limit to keep a ship safe in position and also to run a tender service with not too much swell. Normally there are no waves as the island protects the anchorage area against the North Atlantic swell but with 30 knots, the wind can create enough chop over a distance of a 1000 feet of exposed sea to still make it uncomfortable. And then we pack up and go or cancel on arrival. Once in a while the wind comes from the south west and then we cannot stay at all, as the wind would push the ship onto the beach. Plus this affects the current and then the whole beach can be wiped away. Once the wind changes back to normal that beach re-establishes itself but not too long ago Holland America had to give a helping hand by having a dredger pump some sand back into location before mother nature took care of itself again. No beach and there is no Half Moon Cay enjoyment. But at least we know now that if the beach disappears due to a good South West storm, then it will come back.

We will be gone from here by 1600 hrs. and sail for Ft. Lauderdale, the end of the cruise. Some guests are staying on for another one and some of those were already on board for the crossing. But for most guests it will be time to go back to real life.

I will be transferring ships and switching to the Nieuw Statendam for the next three weeks. And for that purpose I will have to cross the dock. The NSDM will be at Pier 26, the regular Holland America Line Dock and we will be at Pier 21 which normally takes the 2nd Hal ship, if there is one in. It is going to be a busy day as also in port are the Allure of the Seas, the Celebrity Edge, the Regal Princess and the Crystal Serenity. A quick count based on lower bed capacity gives that there will be approx. 19000 guests going on and off, or being in transit. And then I do not even count the crew changes. I am somehow quite happy that I do not have to go to the airport tomorrow. Next blog will be coming from the Nieuw Statendam.