And thus I transferred from the KODM to the NSDM to use company speak. (All our ships have an abbreviation to which all our company communication is identified by)  And I did this in the simplest way possible, I pulled my suitcases across the street. Exiting from the KODM via guest exit as for CBP I am a Visa – person when entering the country and entering via the crew access of the NSDM because when boarding a new ship I am a crewmember. Luckily I only had to cross one street as with all those big ships in, it was controlled mayhem everywhere. I am amazed every time how well things run and how well the Broward Sheriff’s department has things under control. As not every law abiding citizen is a law abiding citizen if there is no police around. Certainly not when having to wait at a street crossing. Plus the companies are adding so many more features and support options to the cruise that you stumble over suitcases, tour group leaders and other entities attached to post cruise activities that we never had before. So while they built the terminals as best as they could, leave it to the cruise ship companies to ensure that the “ample space” in the mind of the designer is quickly turned into “you cannot stand here, the place is full”.  And then an agitated clipboard holder is pushed further down the street.

The good ship Nieuw Statendam is identical to the Koningsdam except for the art inside the ship. That makes it easy to find your way around as soon as you are used to the Pinnacle Class. This class is considerably different in setup and lay out than the S-class, R-class, Vista and Signature Class which are all a logical evolution of the class that was constructed before. In the operational side (read below decks) the layup is quite similar to the Signature class  but the guest areas are completely different, even if the Lido is in the same location. (Deck 9 around the funnel) So this time I did not need my day of re-adjustment and getting used to the fact that peoples offices were somewhere completely different than on the ship that I visited before. The only thing that is different, and therefore there was no blog yesterday, is that each ship has its own internet system with firewall and access codes, so before I am re-connected to the outside world again I have to go the I.T officer and who then makes sure that my laptop can talk to the main frame again. 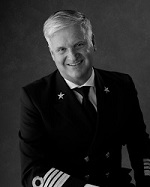 The Master of the vessel is Captain Sybe de Boer who also was the captain who brought the ship into service in December last year. The ship is now on cruise 44 and has been running full all the time with very good ratings and so he is a happy Captain. He will remain with the ship until 8 December and will then go on leave.

Fort Lauderdale was a bit of a miserable day as a weather front come over during the day with rain at times. But that also kept the temperatures down during change over day and that is not a bad thing. Today in Half Moon Cay the weather was perfect. Well almost perfect as we could not anchor but had to drift. With the Koningsdam two days ago we had a gentle breeze from the North East, blowing the ship away from the island and the captain could drop the hook and the ship was safely behind anchor all day. 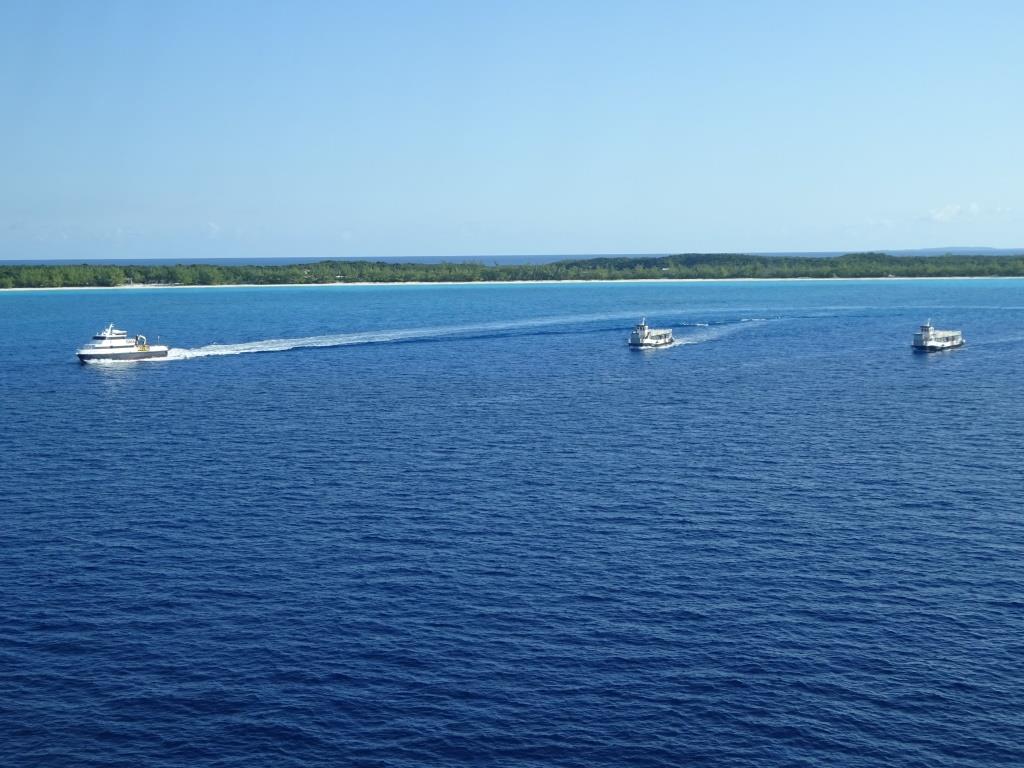 The ship arrives, the Half Moon Cay fleet comes racing out to take 2600 exited beach guests to the island. From left to right: Half Moon Clipper for picking up today’s supplies for the stay and then the guest tenders Henry Hudson and Anne Bonny

But due to the weather front passing through, the wind had turned to the South West, blowing the ship towards the island, and thus the ship stayed “on the engines”. If you anchor with a South Westerly wind, however gentle that wind might be, the ship will wing around it and eventually land on the beach to become a hotel. More or less permanently. That is not the function of a cruise ship and thus the ship stayed on the engines and maintained position by hooking the propulsion system up to the GPS and the computer ensured that the ship stayed where it was told to stay. The navigator then just monitors the situation to see if the computer does a good job. That is quite a boring thing to do so on occasion the navigators will switch to manual and operate thrusters and Azipods by hand to achieve the same thing.  Guests do not notice that, they only see the ship sitting in the same position all day, with occasionally ripples in the water when Azipods and bow thrusters give the ship a nudge in the right direction so it stays where it is supposed to stay.

Now we will sail north of the Bahama bank toward the Grand Turk and Caicos Islands where we will be the day after tomorrow. The weather forecast looks very good. Only gentle clouds in the sky and for the rest sunshine. Cape Hatteras has decided to send the next storm directly to the North East so the connected wave field will not bother us. Good start of the cruise. 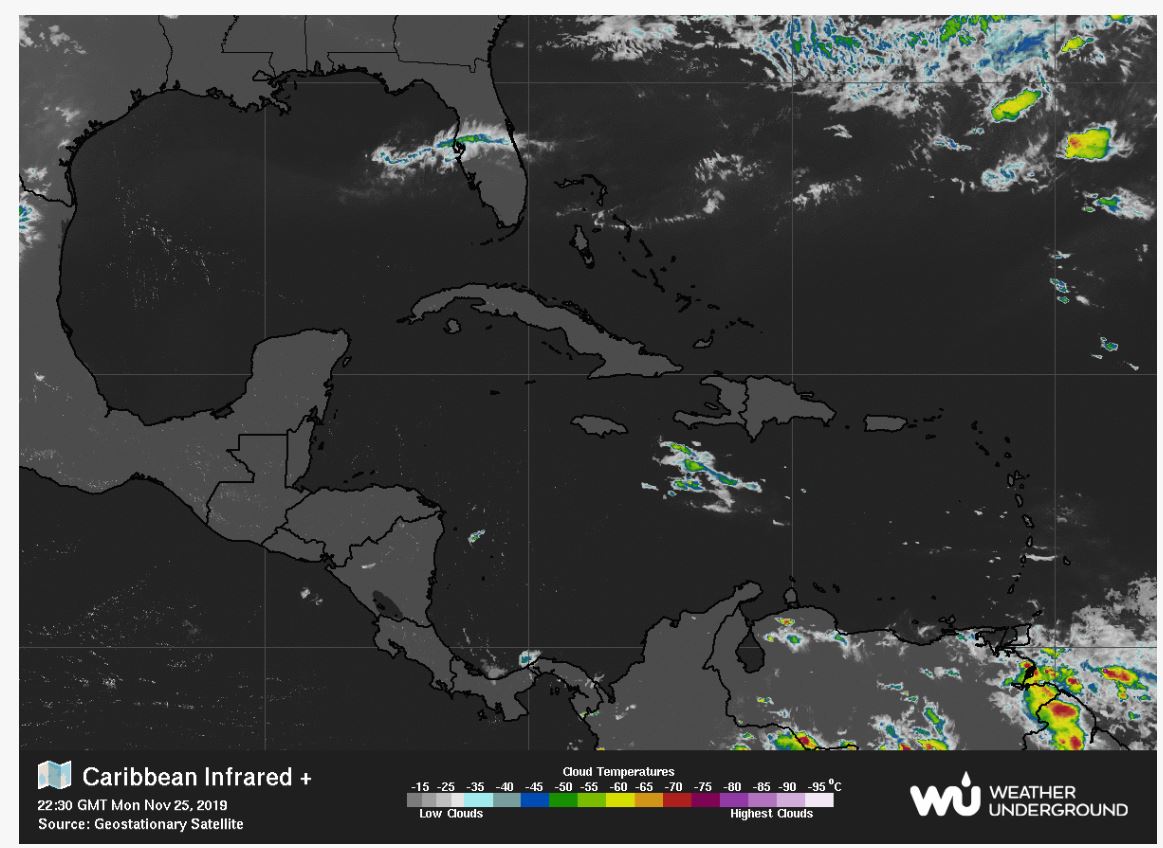 This afternoon satellite infra red picture. Only rain in the center of the Caribbean Sea. (Courtesy to Weather Underground)